For those of you who have a macro flash unit, they are awesome at filling in shadows and giving nice even light of herp closeups.
My problem with mine (Sony Macro Twin Flash) is that the light is a bit too harsh with the undiffused flash heads. So I have been trying to find a diffuser option. The kit comes with stupid little thin things to go over the flash, but I find them next to useless as well as hard to put on in the field.

So I've been thinking about finding a plastic "sphere" that would let light through but fit over these little flash heads. While I was brainstorming all sorts of wacko ideas, a thought popped into my head - Ping Pong balls! They are white, translucent, cheap and about the same size as my flash heads.

So, a quick trip to Walmart for a 6 pack of flash diffusers (Ping Pong balls - $1.60). One pair of scissors and two rubber bands later and I have the macro flash diffuser mark I ready to go. I just cut out a notch the shape of my flash heads, slipped them over the flash and used a rubber band to hold them on.

Here's a could of quick (lousy) comparison shots - The difference is very subtle since the macro flash gives such even lighting, but you can see that the light in the second shot is "softer". There is less shadow and detail in the second shot. Of course, on a subject like this little ivory dragon, shadow and detail is important so the undiffused light looks better. But for herps I think these could be just the ticket. For that night time rainforest walk they would be really easy to install and keep on and help reduce the harshness of the light a bit. I would probably dial down the flash units a bit as well.

This "model" could easily be modified to go over the on camera flash for those without a separate flash head.

Considering that it took me almost 3 minutes to make and install two diffusers using things I could probably buy at a street market in Ecuador, it might be a viable solution.
Unlike tissue paper, it is water resistant and at $3 a dozen, I can afford to make backup sets and lose some.

Now I just have to see if they work on herps. If it ever rains here, I might get the chance.

How about a pic of the modified Ping pong balls.
Top

Biker Dave wrote:How about a pic of the modified Ping pong balls.

I am actually working on Mark II, since I dropped one of the Mark I models out photographing frogs.
I will post a photo when I finish the next design. I need to find an improved way of attaching them.
Top

One material I had great luck with, is white Ripstop nylon. I use it for diffusing sunlight, when photographing wildflowers. With some creativity, you can use it to make a simple flash diffuser. http://www.diyphotography.net/homestudi ... ed-softbox
Top

You can also use the old translucent white film canisters. I picked up a couple for free from a local photography place. All you need to do is make a little slit, and they work just fine.
Top

umop apisdn wrote:You can also use the old translucent white film canisters. I picked up a couple for free from a local photography place. All you need to do is make a little slit, and they work just fine.

Those were my first idea, but I couldn't find any. I must have gone through 1000 of those over the years and now I can't find one. Great idea on the camera store. I'll have to check.

I'm not 100% happy with the ping pong balls. I like the diffusion, but they tend to get knocked off in the field because they are a little shorter than the flash head itself. Trying for the next solution.
Top

OK, so I am revisiting this post to give an update to my strategy here.....

The ping pong balls were a fail. They were too flimsy, fell off too much and fell apart with any stress.

So I went to Cheap Macro Flash diffuser Mark II. I bought a couple of these cheap LED nightlights at Target. They come in two packs which is perfect and the nightlights still work after you pop the diffusers off if you are afraid of the dark

and here's a recent but uninspired shot with those in place - 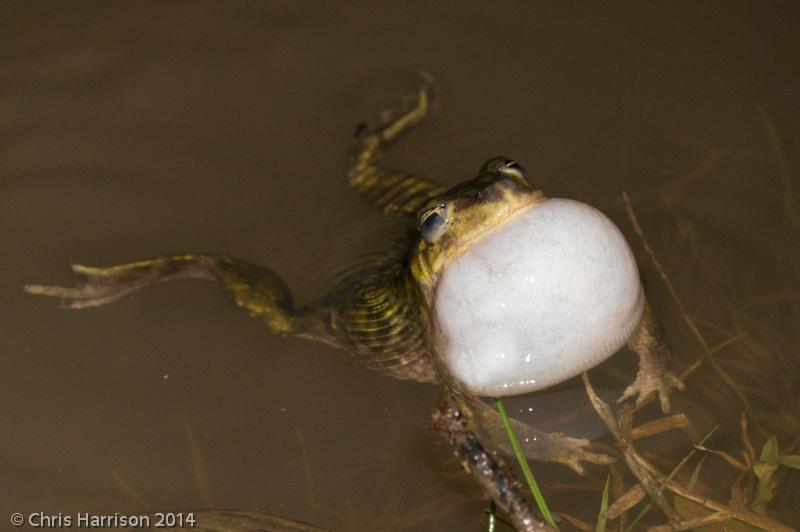 They did a good job, they were field hardy and I was reasonably happy except they fell off whenever they were bumped because only one edge had velcro attaching it to the flash.

I have been looking carefully at Kurt's (orionmystery) wonderful shots from Asia over the last years and noticing the evenness of his flash lighting. So I went to his blog (http://orionmystery.blogspot.com/) and read some of his pages about how he and his friends have made diffusers from a variety of materials (http://orionmystery.blogspot.com/2010/1 ... pdate.html as well as other posts in his blog). Of particular interest to me was the idea of using the polystyrene sheets that are used to pack things for shipping.

I have to be honest that although his photos are spectacular, I am not a huge fan of the "dome of light" look that his big diffuser sheet gives. However, the idea of using the thin polystyrene sheets was intriguing because they fit the criteria of this project (i.e. cheap and easy!). I happened to have a sheet of this stuff in the garage and some Velcro strips and within 5 minutes, I now had this setup finished -

and here's my fancy attachement system -

Overall, I am happy so far. They don't fall off, they are easily fixed/replace with a piece of foam (I carry some extra in my camera bag now), they weigh almost nothing and they are somewhat malleable as I can bend them up and down (as well as pivot the flash heads) to get the look I want. They are flat and fit in my shirt/pants pocket easily and I can carry extra sheet to custom make a larger/smaller one if I wanted in the field.

I don't have any good shots showing its potential yet. Here's one I took last weekend of some trash on a west Texas road cut -

This foam sheet has excellent potential for a wide variety of diffusion applications and I have to thank Kurt for posting his setup to get me thinking of better ways to use it.

To be continued, I'm sure!
Top

Have you ever considered creating a bounce wall (which enlarges your light source, and softens it was well. I tried this and was impressed with my results. http://guyphoto.wordpress.com/2013/06/2 ... unce-wall/

Old school digital tricks......i've been using a wonderbread sandwich box on my camera lens for years along with the icing cap from pillsbury cinnimon rolls over the flash.
The sandwich box is a $1.25 ringflash .....love it!
Ks
Top

Have you ever considered creating a bounce wall (which enlarges your light source, and softens it was well. I tried this and was impressed with my results.

I have used collapsible diffusers and reflectors to do this on a number of occasions but I find that having someone else have to hold the diffuser / reflector is a pain in the butt. In an emergency, I have used a white piece of paper from a copier for a reflector / bounce wall.
Top

Have you ever considered creating a bounce wall (which enlarges your light source, and softens it was well. I tried this and was impressed with my results.

I have used collapsible diffusers and reflectors to do this on a number of occasions but I find that having someone else have to hold the diffuser / reflector is a pain in the butt. In an emergency, I have used a white piece of paper from a copier for a reflector / bounce wall.

Just another take on the cheap diffuser thing. I sawed a plastic vial in half and sand paper 'frosted' the halves. They were taped to the clip on wide angle prism diffusers supplied with the flash:

I am not sure what you mean by "dome of light"? Are you referring to the catchlight in the eyes?

As long as there's light, there'll be catchlight. Catchlight will always be there, regardless if you use flash or not (natural light):

You should see some of my older shots with poorly diffused MT24EX, i.e pre-concave diffuser days:

Look at the harsh light and ugly, distinct catch light (obviously from a twin light

). The catchlights were blown and I had to do burning in photoshop. 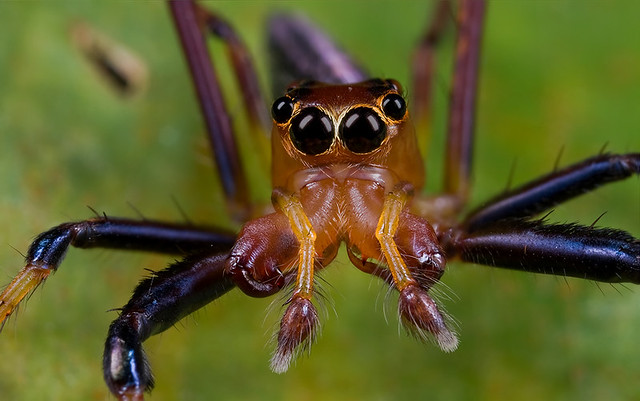 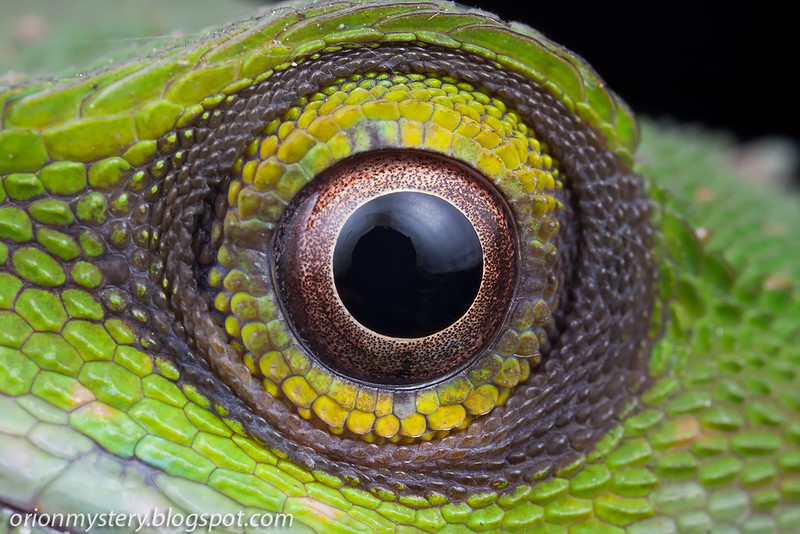 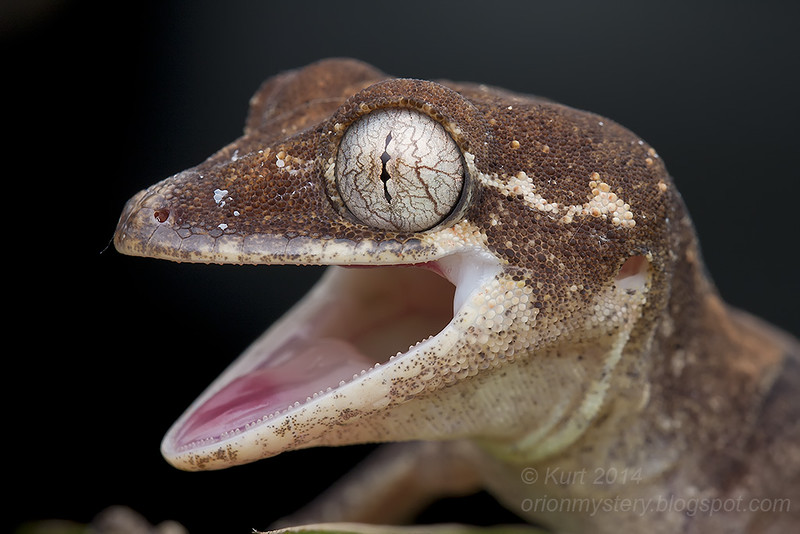 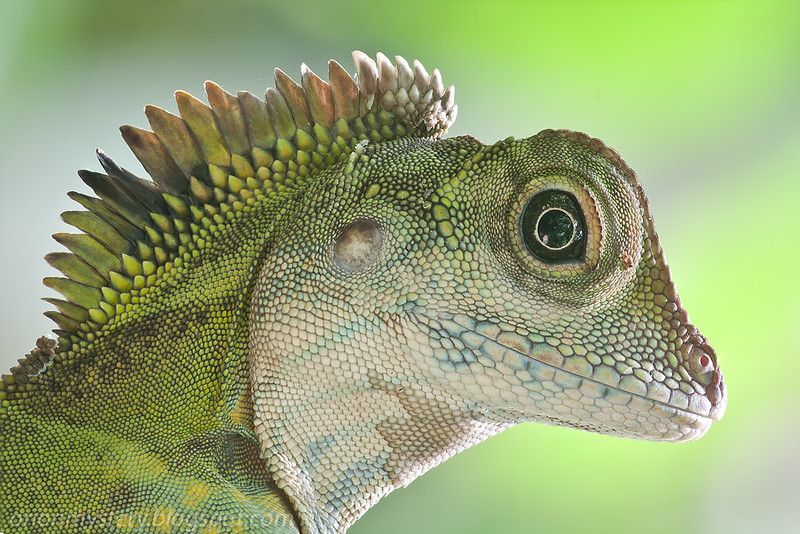