Hey guys, I'm looking for suggestions from others on flash photography techniques. Do you leave headlamps on? Maybe turn the light level down? I was having trouble with trying to focus on this constantly-moving long-nosed snake in low light, and you can see that my headlamp beam resulted in some uneven lighting in the photo below. Not sure what the solution is. For a flash I am using an 430EX II speedlite with a diffuser (on camera), angled at 45 degrees. I'm thinking about investing in a Macro Twin Lite. 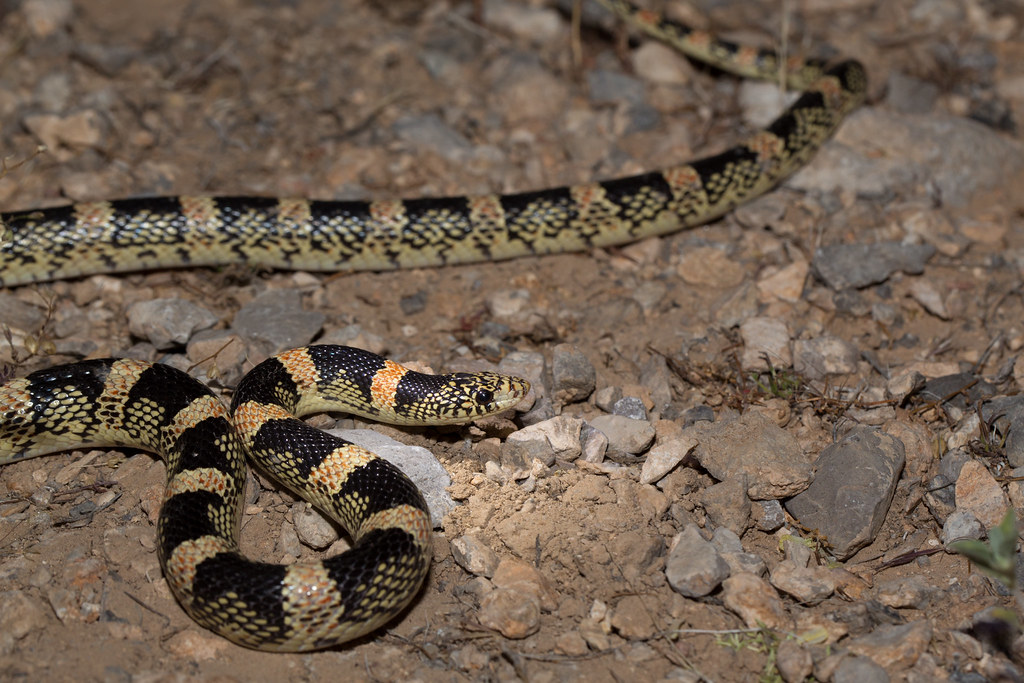 I would leave the headlamp on to focus, but I usually stop down a bit more f/16 and I usually shoot at iso 100. That's generally enough to completely drown out any light but my flash.
Top

I always try to turn the headlamp/flashlight away right at the last minute so that it doesn't color the image and affect the exposure.
Top

Thanks, I will give these suggestions a try!
Top

I have been in the very same situation you are in now. When I started shooting with a large flash in the camera’s hotshoe; I also use a Canon 430 EX II flash, my headlamp would not illuminate the subject enough to focus on or sometimes to even see it. The flash would block it and the light would bump into it all of the time. I came up with using a flash bracket and a small inexpensive LED flashlight mounted with rubber bands on the top that allows me to use my left thumb for precise pointing of the light. I'm more often than not out alone at night shooting so I had to come up with something that I could use and operate by myself. The flash bracket moves my flash off of my camera and above it which helps direct the light more and it’s not directly straight at what I’m shooting. The flash isn't as harsh as it was when using it on-camera. I had to try a few different little flashlights to get one in which it closely matched the light temperature from the flash, which is about 5500K. Others I tried were too warm and the color difference was noticeable.

This lighting setup has worked all over the southwest for several years.

I also shoot with a Canon MT-24 EX twin flash on my macro lens, but that flash system can be very limited when shooting a large subject in open area. It was not designed for filling a large area with a lot of light, a larger flash is much better at that.

Sometimes I also use a bounce card to reflect the flash off of the card and onto the subject. This results in some very good, soft, light and really lessens the shadows. This does not work in all situations and is better suited for larger subjects. Also, use without the diffuser.

Lately I've been using off camera flash wirelessly with my Canon 7D. It uses the pop-up flash to send a signal to the 430 flash that is set as a slave. This setup has worked very well for me. It can be hit or miss in bright daylight as the flash can’t detect the camera’s flash signal as well. But at night it’s about foolproof. I mount my flash onto a small travel tripod and make sure the flash’s sensor is pointed back toward the camera.

By using the off camera flash I get much better detail and control of the shadows and where I want them.

I'm always trying new techniques and ways to shoot things. This was all trial and error and it has worked very well for me. Hope it helps.
Kevin
Top

Kevin, thanks very much for your suggestions and photos of your setup. Do you happen to have any examples of photos where you used the bounce card?
Top

Zach Cava wrote:Kevin, thanks very much for your suggestions and photos of your setup. Do you happen to have any examples of photos where you used the bounce card?


My method is very similar to Kevin's except, I use wireless radio triggers to trigger my off camera flash instead of using the pop-up flash as a slave. I use a manual flash set it to 1/8 power, with a small diffuser over the flash. My usual camera set-up is a Nikon D90 with Nikkor 35mm F/1.8 set to F/8, and a shutter speed of 1/200. With the relatively quick shutter speed, and the bright flash output, I do not see the light generated from my flashlight, used to focus my camera.
Top
Post Reply
7 posts • Page 1 of 1