Hey everyone, I wanted to share my first attempt at photographing a salamander at night, as well as my first nighttime herp-in-habitat shot. It was tough! I'm wondering if anyone has some tips for this type of shot. I used a Canon 6D with a 17-40mm lens at 20mm, f/6.3, ISO 640, 2 sec. I used 2 speedlights; one w/ a diffuser set up close on the salamander, the other aimed at the trees in the background, but I also used my headlamp for light painting a bit. Has anyone noticed if using a red filter on a headlamp disturbs the animals less? how do others get even lighting on the background for night shots? thank you 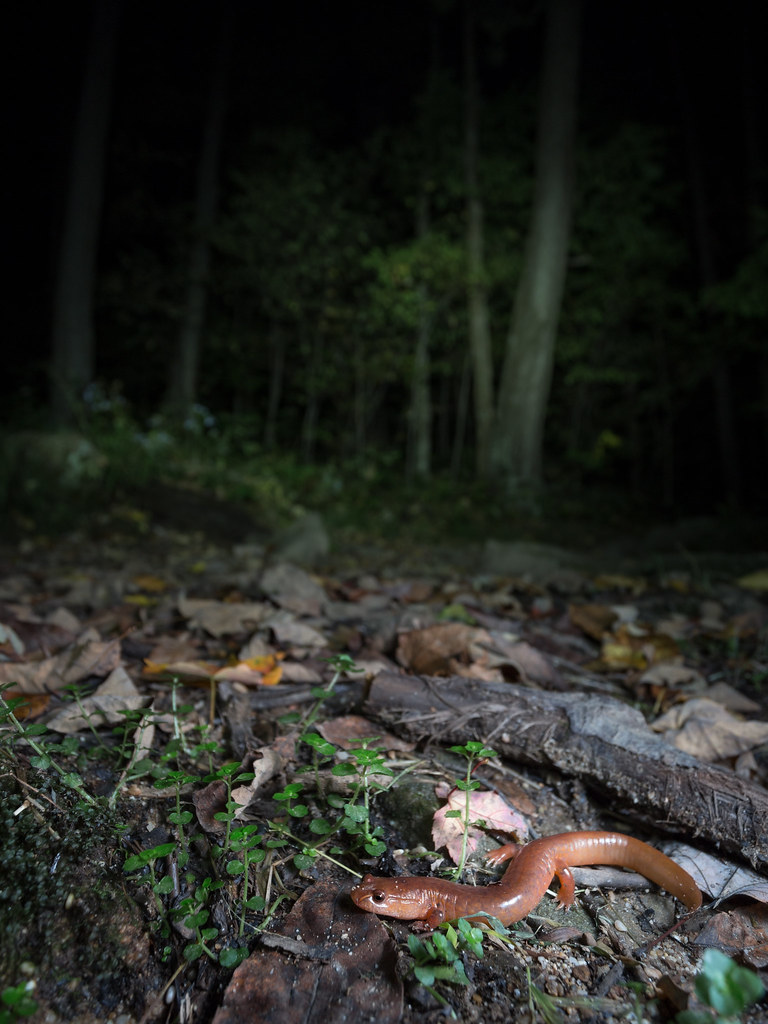 This is something I'd like to get the hang of, but I think a lot of people will stack two shots, basically get the animal lit, and then do the background. Doing it all together at once isn't easy, particularly if you want to go with a more natural look.
Top

MonarchzMan wrote:This is something I'd like to get the hang of, but I think a lot of people will stack two shots, basically get the animal lit, and then do the background. Doing it all together at once isn't easy, particularly if you want to go with a more natural look.


Thanks for the input, I've seen examples of this and was thinking about that option. In that case I'm guessing using a long exposure and light painting would be the easiest way to illuminate the background? thanks
Top

I'd just be sure to paint the background with whatever light you're using to illuminate the subject. You can tell that you used an LED flashlight to light up the background in this picture because the light is a bit cooler than the light illuminating the salamander.
Top

MonarchzMan wrote:I'd just be sure to paint the background with whatever light you're using to illuminate the subject. You can tell that you used an LED flashlight to light up the background in this picture because the light is a bit cooler than the light illuminating the salamander.

Just curious, what browser are you using? I just updated my OS to Sierra and since then the colors are off when using Chrome, but look correct in Safari.
Top

I’ve done a little of this, though my situation is somewhat different from yours since I live in the wide-open southwest and am usually photographing animals against the night sky. Even on a moonless night the sky is always brighter than animals in the foreground. If you are working in forest your animals and your backgrounds may be the same brightness, which I think complicates things a bit. If you use a long exposure for the background, (as I have on the examples below), you’ll end up illuminating the foreground and getting double exposure where the animal is, since it will undoubtedly move during the long exposure. Your best bet may well be light painting or multiple flashes to illuminate different parts of the scene.

I like the effect you got on the shot you posted by the way. Chihuahuan Hook-nosed Snake, New Mexico. by Bill Gorum on 500px.com
This picture is a single exposure, with flash illuminating the snake and the shutter left open for 30 seconds to pick up the lights from scattered houses and the sky. The orbs in the sky are out of focus stars. One thing I dislike in pictures taken this way is the black middle ground. Basically, the middle ground is too far away to be illuminated by the flash, but it’s also far darker than the sky, so gets no appreciable exposure during the 30 second that the shutter is open. Sonoran Gopher Snake, Pituophis catenifer affinis by Bill Gorum on 500px.com
Here’s one where two exposures were combined, though strictly speaking, this could have been done with a single exposure too. In this case most of the middle ground has been eliminated because the terrain was very flat, and the vegetation right at the edge of the road was close enough to receive light from the flash. Couch Spadefoot, (Scaphiopus couchii). by Bill Gorum on 500px.com
This is another single exposure. 30 seconds to get the stormy night sky, with two flashes, one aimed at the spadefoot and the other aimed at the vegetation on the opposite shoulder of the road. All the orbs in the upper left are out of focus rain drops illuminated by the flash. Western Diamond-backed Rattlesnake ambush coil. by Bill Gorum on 500px.com
This one was taken before it was completely dark. In this case I used HDR to squeeze the contrast range all into one picture. This is all available light, no flash at all. 5 frames, bracketed two stops apart, (10 stops total range). Great Plains Toad, (Anaxyrus cognatus), and full moon. by Bill Gorum on 500px.com
Here I just wanted the toad and the full moon. Single exposure, one flash on the toad, one on the grass behind it, 30 seconds. If I wanted the moon in focus, I could have done this with two exposures, one focused on the toad, the other on the moon. The moon would have been smaller then, though. Prairie Rattlesnake on shoulder of highway in New Mexico. by Bill Gorum on 500px.com
This one’s a combination of at least three different exposures. I needed a different exposure for the sky, the lights, and the snake. The camera was sitting on the ground and I had to be very careful not to move it as I changed exposures. Prairie Rattlesnake and Milky Way. by Bill Gorum on 500px.com
This is a combo of two exposures. The snake was shot with a low ISO, small aperture, and flash. The starry sky needed a high ISO, lens wide-open, and a long exposure. I did forgot to re-focus for the stars exposure, so the stars are out of focus. Couch
Same process as above, but I remembered to re-focus.
Top

Obviously Bill is a master at this so his comments will be the gold standard, but I just wanted to add a thought about using rear-curtain sync instead of front-curtain sync (i.e. standard mode).

With this technique you could paint the background with light for the long part of the exposure than have the flash(es) fire right before the curtain closes. This might reduce the chance of the critter moving and getting enough exposure to be documented in the move. If it does move, the "front" of it will at least be sharp.

Multiple exposures will probably be simpler though? One mid-range, one background and then your critter shot in the foreground.

And in your shot, I don't mind that everything isn't fully lit - it helps set the scene that it was nighttime.
Top

Bill, very cool stuff. Thanks for all of the examples and info. Lot's of room for experimentation for sure!

Chris: That's an interesting idea and I'm curious if anyone's tried it. I also agree that I like that the background is still somewhat dark. It definitely seems like a challenge to produce a "natural" feeling nighttime shot (whatever that means), and with this photo I wanted to show that it was dark out, while still revealing some of the surrounding habitat.
Top
Post Reply
9 posts • Page 1 of 1