My little brother and I decided to take advantage of a storm forecasted for Sunday by hiking in the woods in search of salamanders. We are very new to herping this time of year, which might explain why I never have much success finding salamanders. I'm trying to mix things up a bit this year, and hopefully it will pay off. So far so good

We entered the woods at around 1:00PM. It was about 55F degrees, and lightly raining outside. It was quite windy. These woods are very very rocky. In many places there is no soil, just rocks, moss, and plants. They are also quite steep and difficult to navigate. The valley of each hill had nice clear spring-fed creeks and streams.

Unfortunately I did not have my digital camera with me. I had to resort to using my cell phone to snap some photos. I think these are easily some of the best photos I've ever taken with a cell phone. I'm quite pleased with how they came out, considering the less than desirable conditions.

A few habitat shots. These photos came out very drab and dull looking due to the overcast skies. The photos look nothing like what we were seeing with our own eyes. There was moss all over everything, and every patch of it was a vibrant lush green. It was stunning, I wish I could have captured the beauty with photographs.

Ready for something truly unusual? I still have no idea what this is. Waiting to hear back from an expert on salamanders. If any of you have any idea, please offer them up.

This salamander was discovered by my brother at the bottom of a hill. The ground flattened out and there was a grassy flat area between the foot of the hill and the creek. He was under a large flat rock in the middle of this grassy area.

The rain had just started again, and was getting heavier fast.

And now for some more western slimys

At this point it's raining pretty heavily.

^ Above is the last photo my cell phone was able to take in the woods before the battery was completely dead.

At 3:06PM we found two species of salamander I've never been able to find before. They were all in the same rock structure right on the edge of the creek. The structure was like shelves of limestone with deep recesses full of loose rock fragments, moss, leaf litter, soil, and water. I wish my cell phone had been working just to take some habitat photos

The rain was at an all out down pour at this point. Thankfully we had packed rain gear and were carrying it with us on our hike.

I had several spare jars in my back pack, so we put leaf litter and soil in them to temporarily hold the salamanders. We hiked back up the hill, out of the woods, and to the house. I let my cell phone charge for about 20 minutes, which gave me just enough of a charge to photograph 4 of the 5 specimens we had jarred.

We brought some mossy rocks, a fern, and a flower from the woods with us to pose the salamanders on. All of the photos below were taken on the back porch of the house.

I could have charged the phone again to photograph the last specimen, but I didn't want to stress these delicate critters out anymore than I already had.

After we took these photos we hiked back into the woods and released them exactly where we found them.

We encountered several more western slimy salamanders, and 1 pickerel frog before we called it a day at around 4:30PM. Unfortunately we did not get photographs of them due to my cell phone situation.

According to an expert that Dan Krull knows, the mystery salamander could very possibly be a hybrid between a cave salamander and a dark-sided salamander.

It's an unusually patterned individual of one of those species, but I don't think it's necessarily a hybrid. If I remember correctly, I've seen people post pics of Desmognathus and Plethodon with similar aberrancies.
Top

I saw a few cave salamanders that looked like the mystery one while I was in Missouri. I would assume that is what that one is as well. 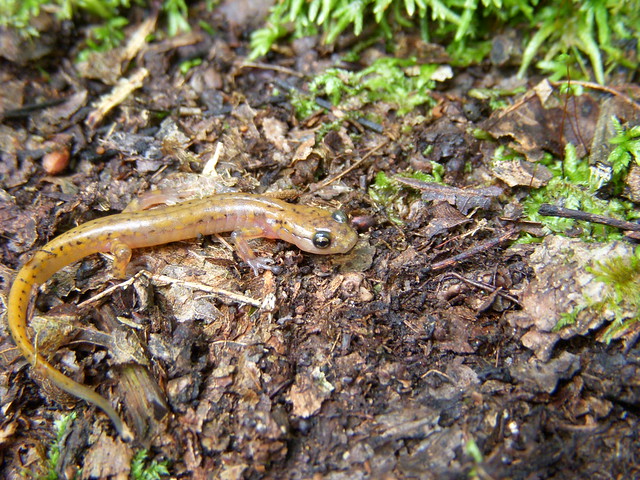 I agree it's a Cave Sallie. I've found them on dry hillsides under rocks, but I've seen them in caves too.
Top

Awesome, Cam. A couple of us did an Arkansas Ozarks sallie day Saturday and fared alright. Ended up with 6 sallie species plus a few other odds and ends.
Top

KevinS wrote:It's an unusually patterned individual of one of those species, but I don't think it's necessarily a hybrid. If I remember correctly, I've seen people post pics of Desmognathus and Plethodon with similar aberrancies.

Interesting, thanks for your input

corey.raimond wrote:I saw a few cave salamanders that looked like the mystery one while I was in Missouri. I would assume that is what that one is as well.

Thanks for your input

Wow, that one is much prettier than what I found

justinm wrote:I agree it's a Cave Sallie. I've found them on dry hillsides under rocks, but I've seen them in caves too.

mikemike wrote:Awesome, Cam. A couple of us did an Arkansas Ozarks sallie day Saturday and fared alright. Ended up with 6 sallie species plus a few other odds and ends.

That's awesome! I'd love to do some herping in Arkansas some day soon. I would have stayed in the woods even longer on Sunday if my ride wasn't in such a hurry to get back to Kansas City. Are you going to make a post about your trip?
Top
Post Reply
9 posts • Page 1 of 1