I recently got a new digital camera and was looking for a chance to take it out in the field and put it through its paces. One of my friends is heading down to the Carolinas to start working toward his PhD, so we scheduled a final night of herping at a state park before he left, giving me the perfect opportunity to test out the new camera. It's a salamander heavy post, but I made sure to include something to keep the snake folks happy as well. OK, away we go...

Desmognathus monticola are everywhere at this particular site. I know they're super common, but all we have around my house are D. fuscus so I get a little picture happy when I see monticola with coloration/patterns I think are interesting. Here are several from this outing. 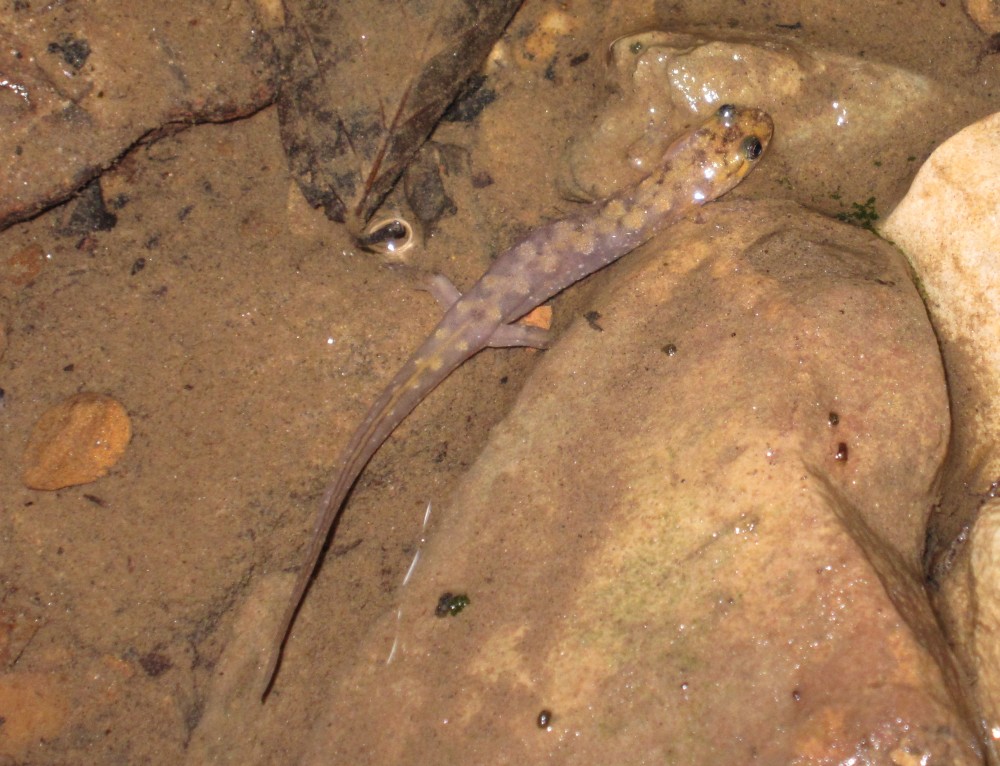 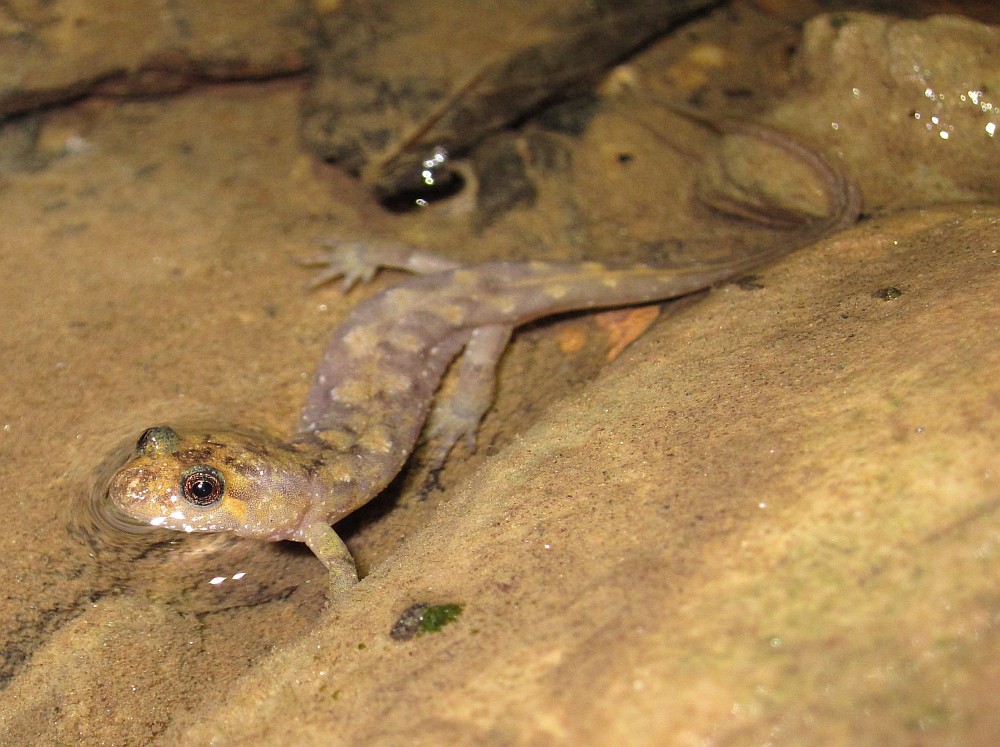 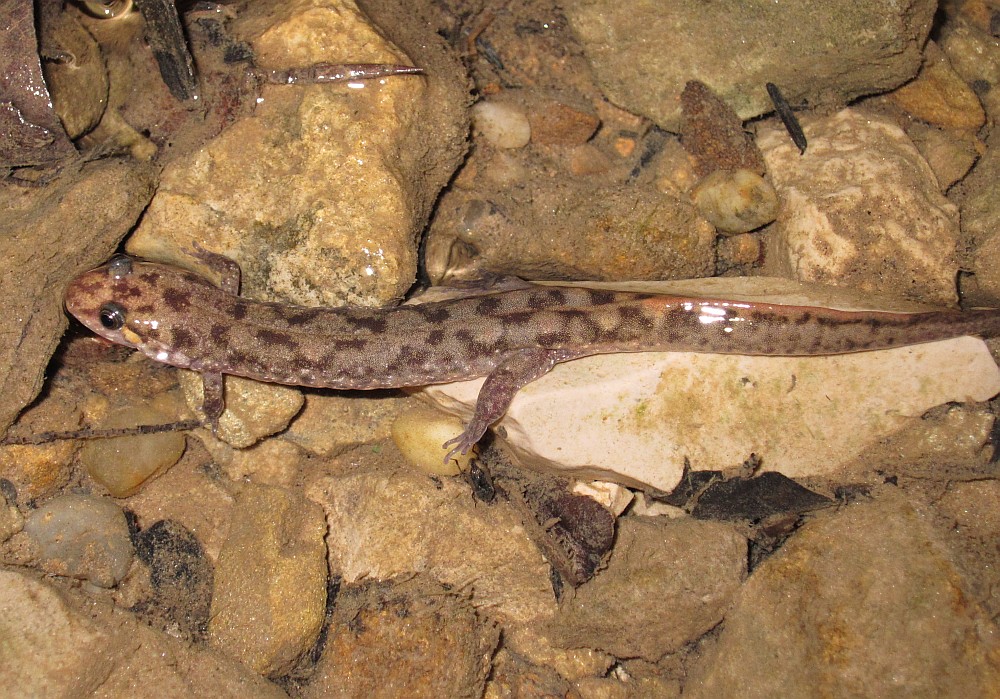 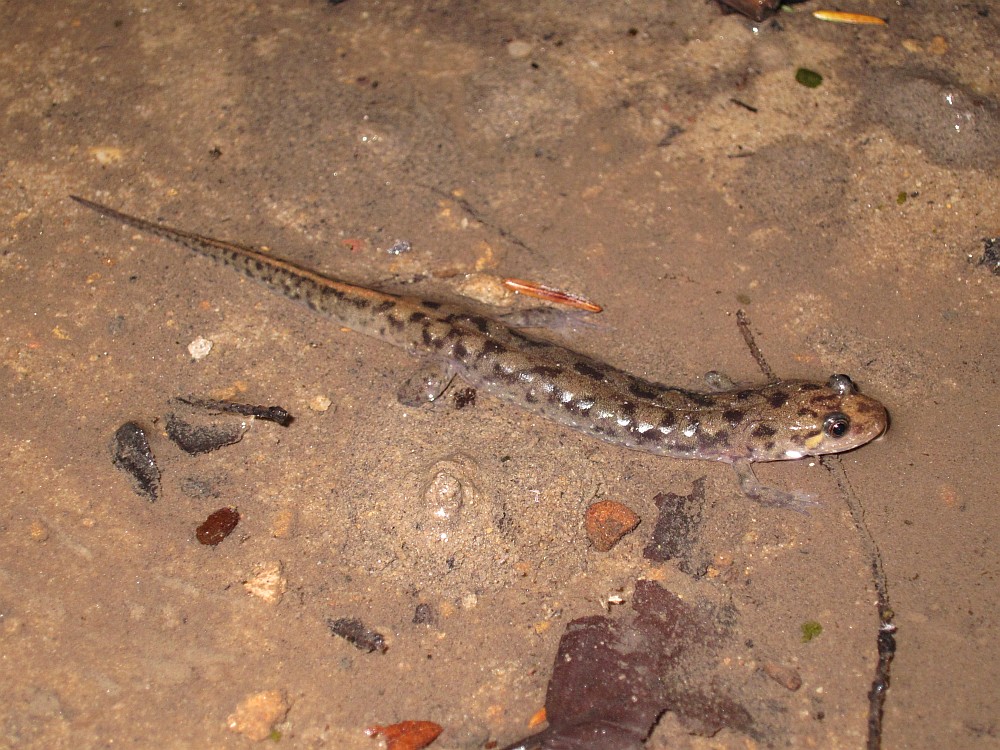 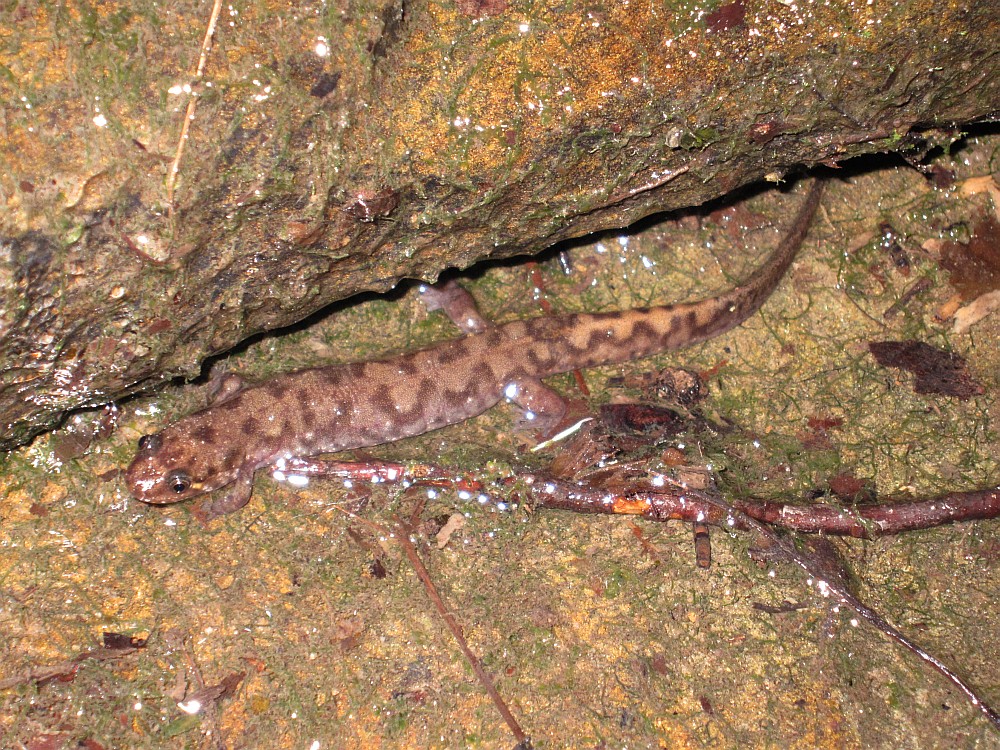 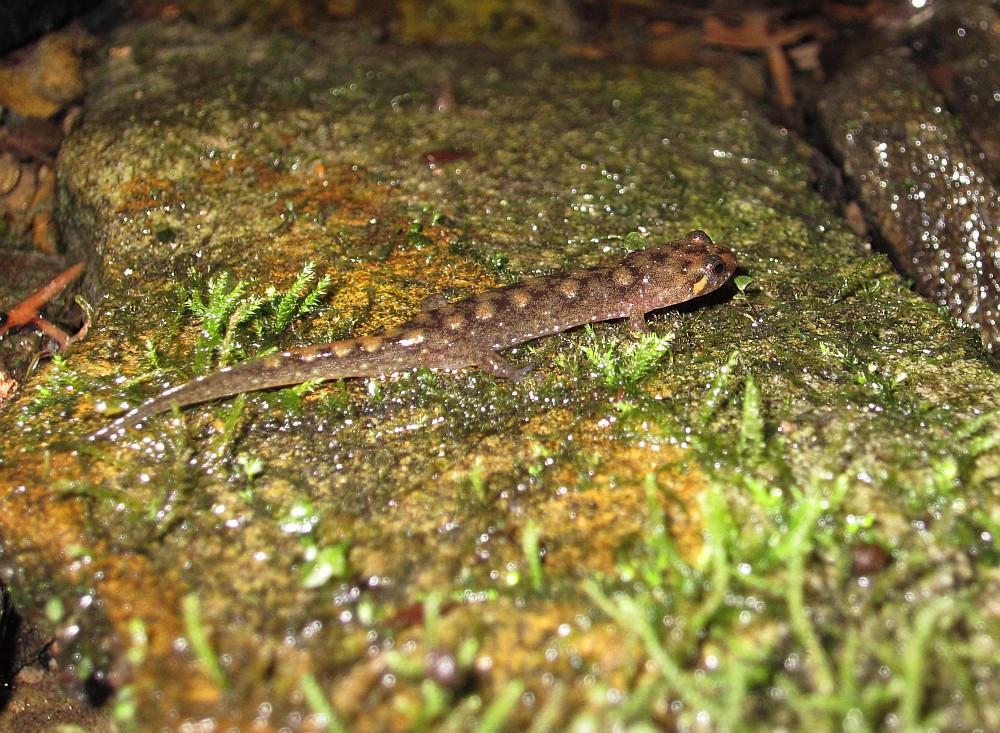 Is this a larval D. monticola or E. cirrigera? I'm embarassed to admit that I'm still no good at distinguishing these genera as larvae when they're small. 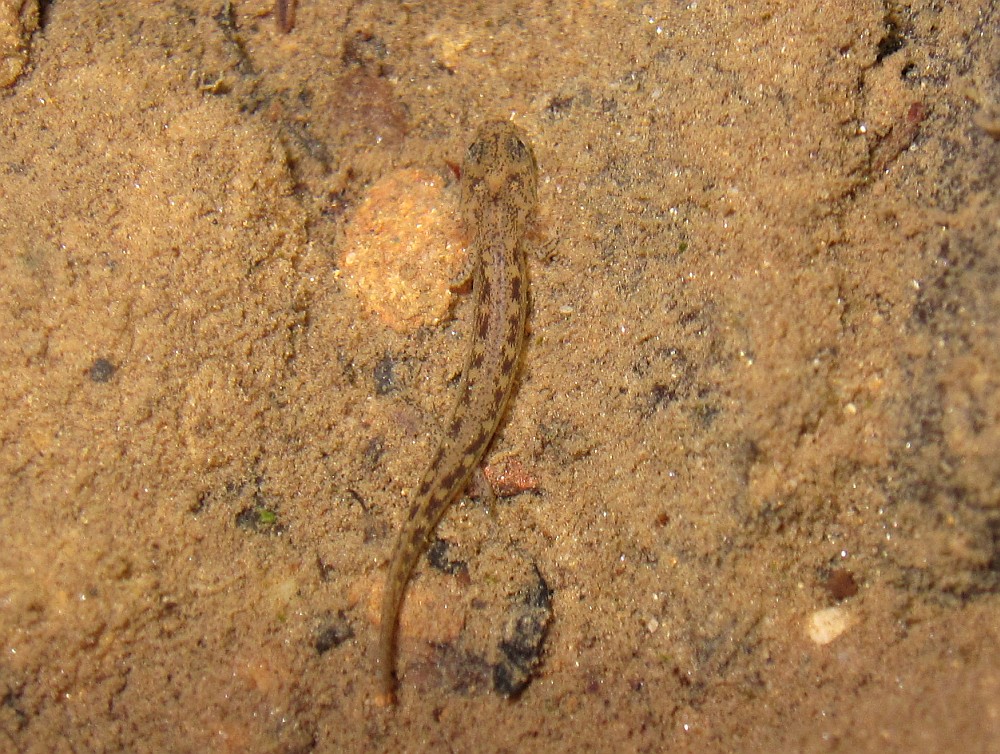 Desmognathus fuscus, just so I can say I included one 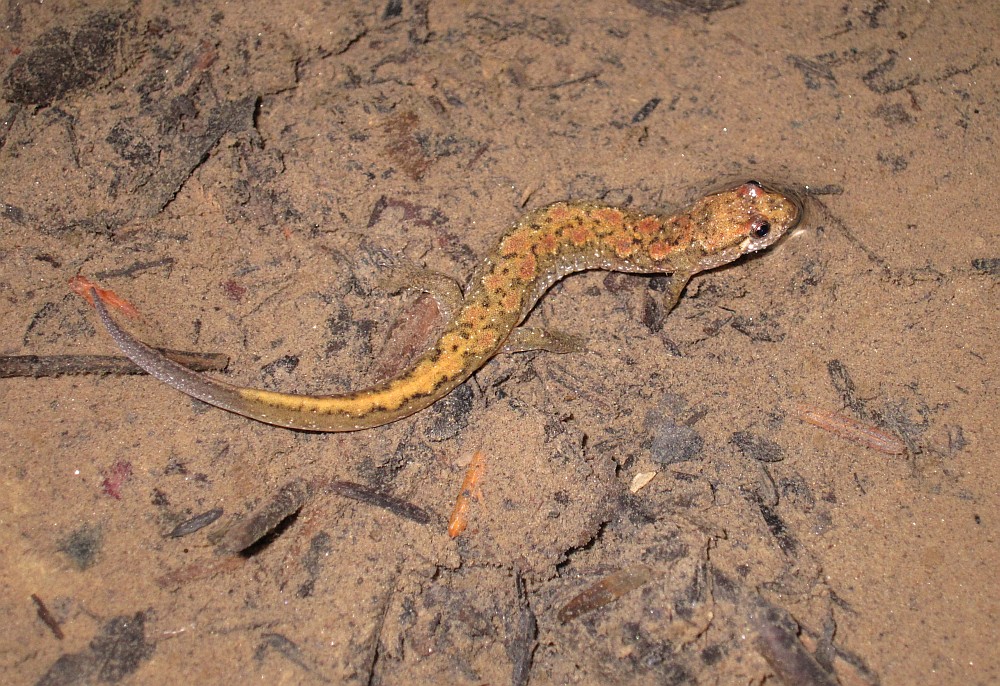 As we continue on with super common species, here's the never-elusive Rana clamitans melanota. 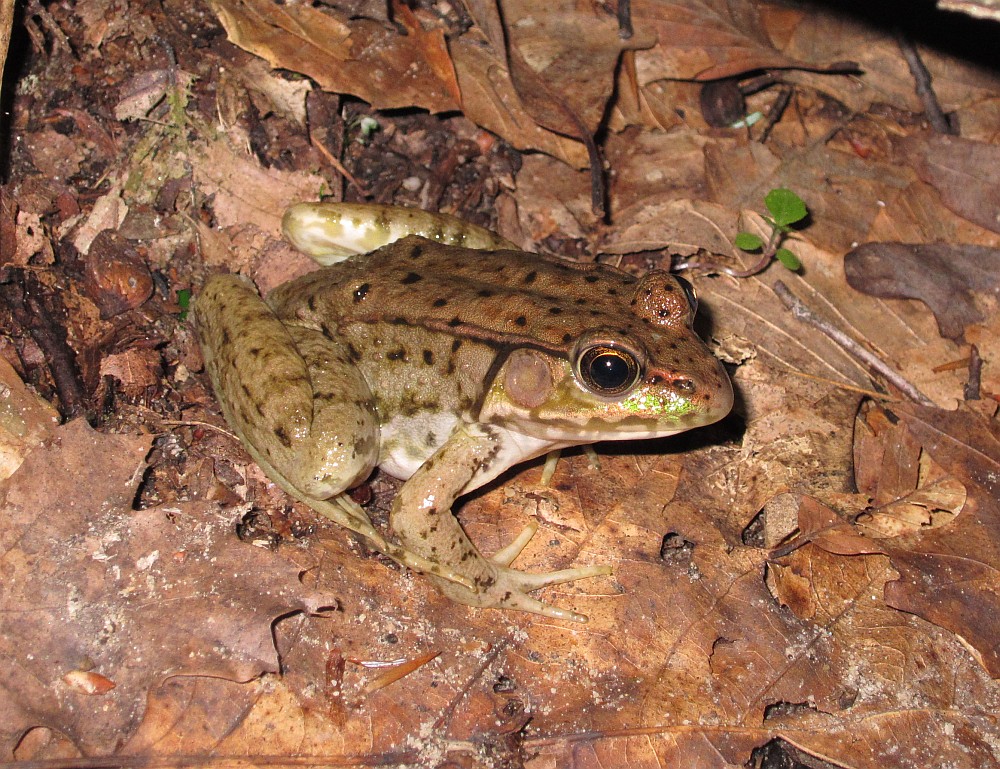 I believe this is a young Pseudotriton ruber larva. Some others escaped before I could confirm, but I think P. montanus diastictus larvae may have been present as well. 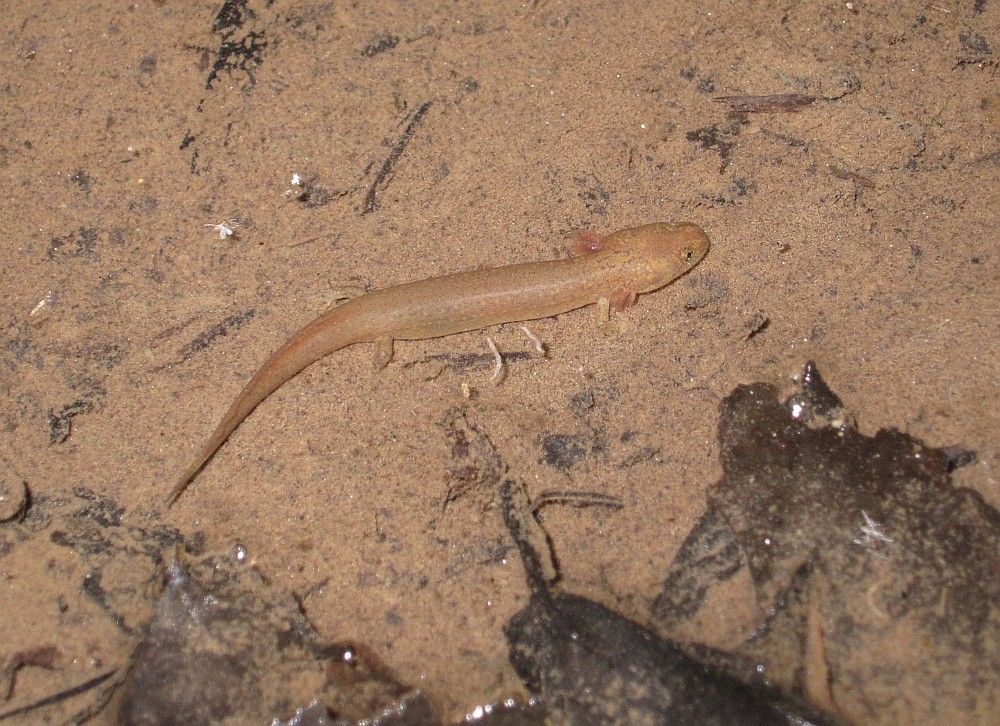 Rana sylvatica-I never seem to spot them unless they're moving. 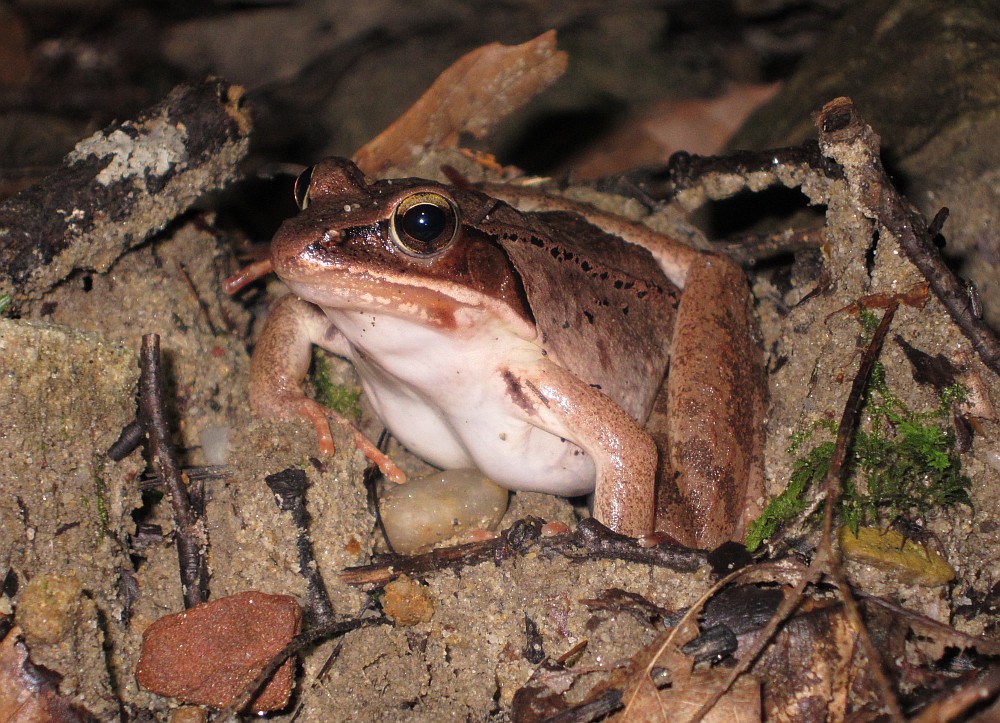 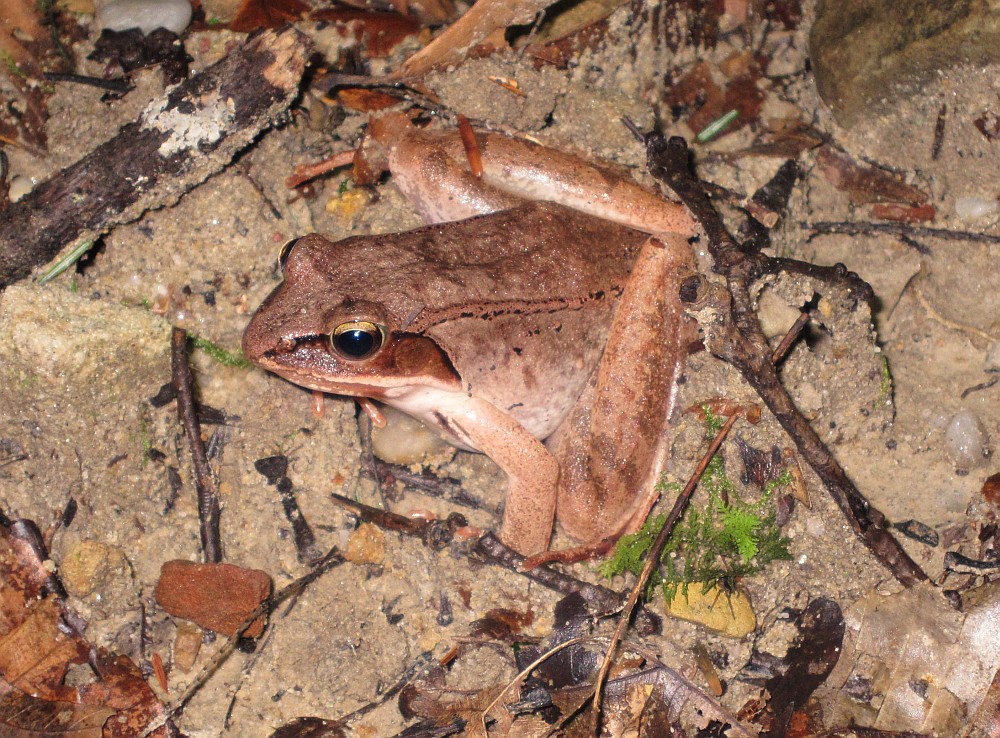 We were really hoping to see some timber rattlers since nice individuals had been found here before. For all our efforts to find snakes, all we came up with was a garter crossing a trail early on. We gave up on the spots that look promising for snakes and I started climbing up a seep to look for more salamanders. As I stopped to photograph another monticola I heard "Holy $%^*&, copperhead!" I looked up at eye level on the next ledge I would have climbed to and saw this right in front of my face (Agkistrodon contortrix mokasen). 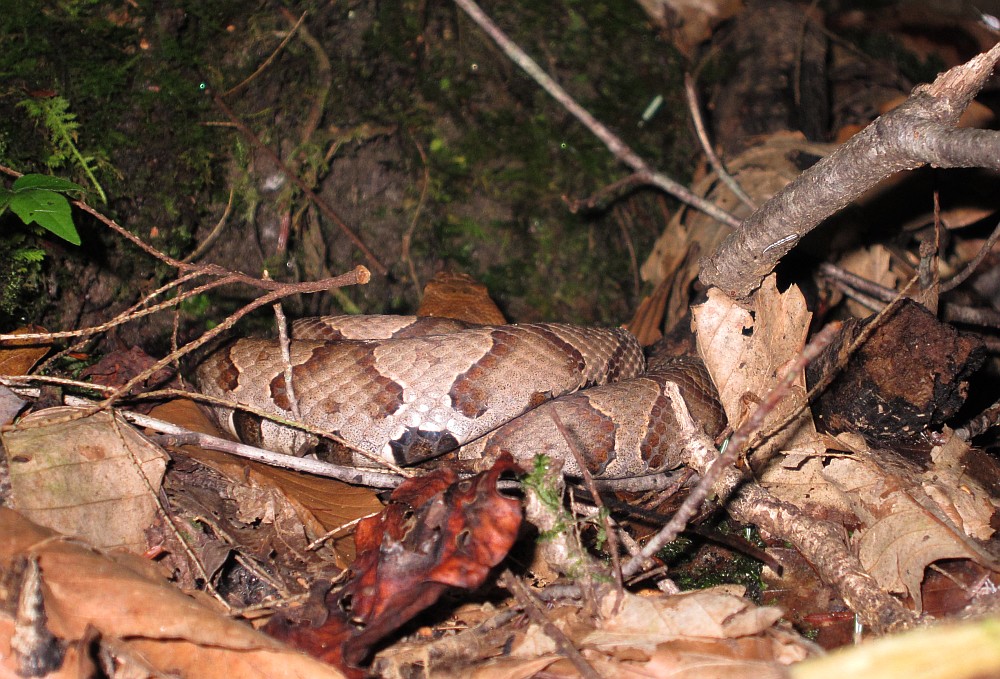 It was relaxing right at the edge of the seep and I carefully climbed up for a few more pictures from a better angle. 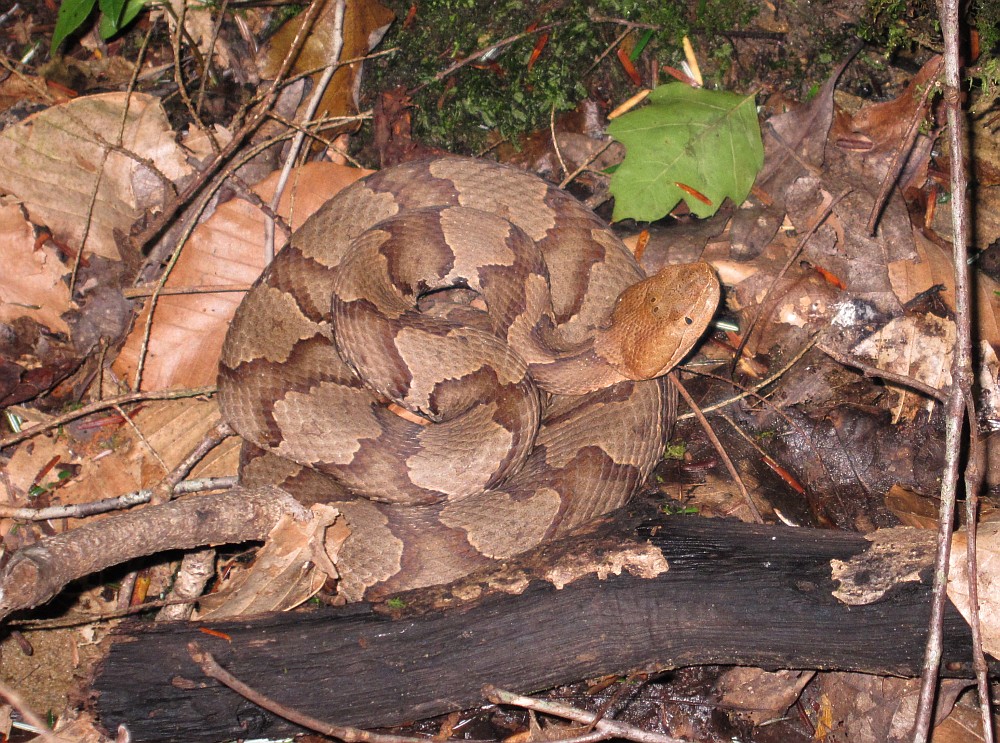 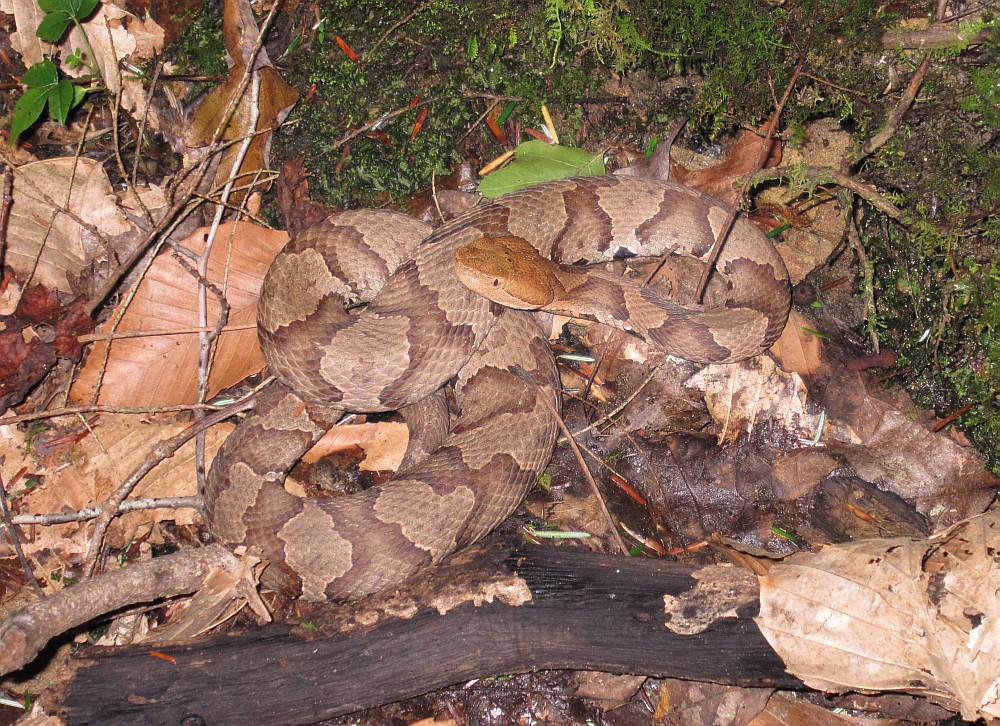 Just above it, I found several Plethodon kentucki, though I couldn't get good pictures of most since the batteries were fading in my camera. 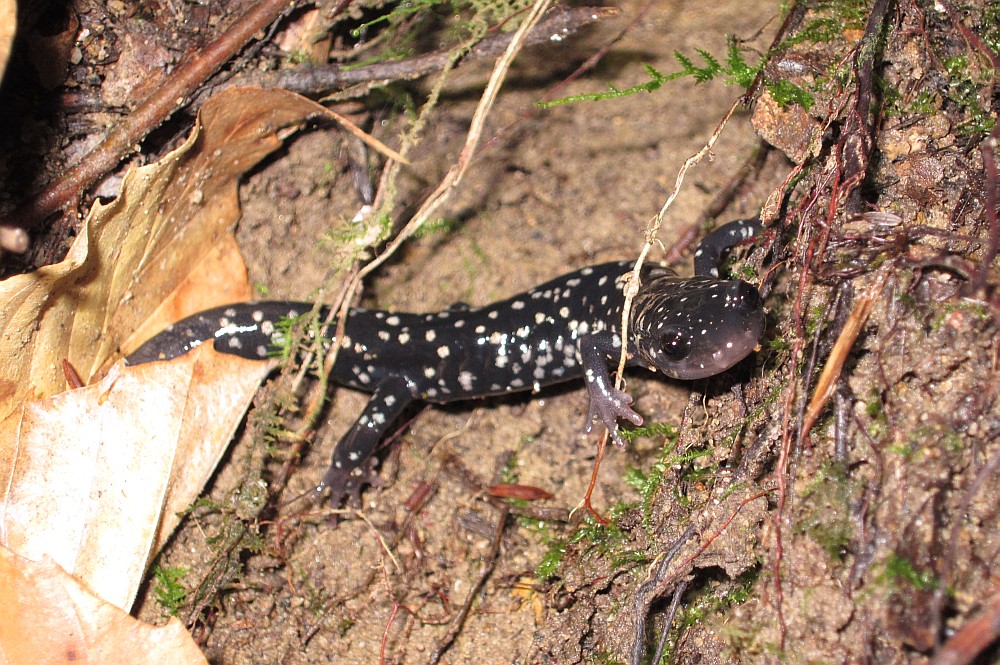 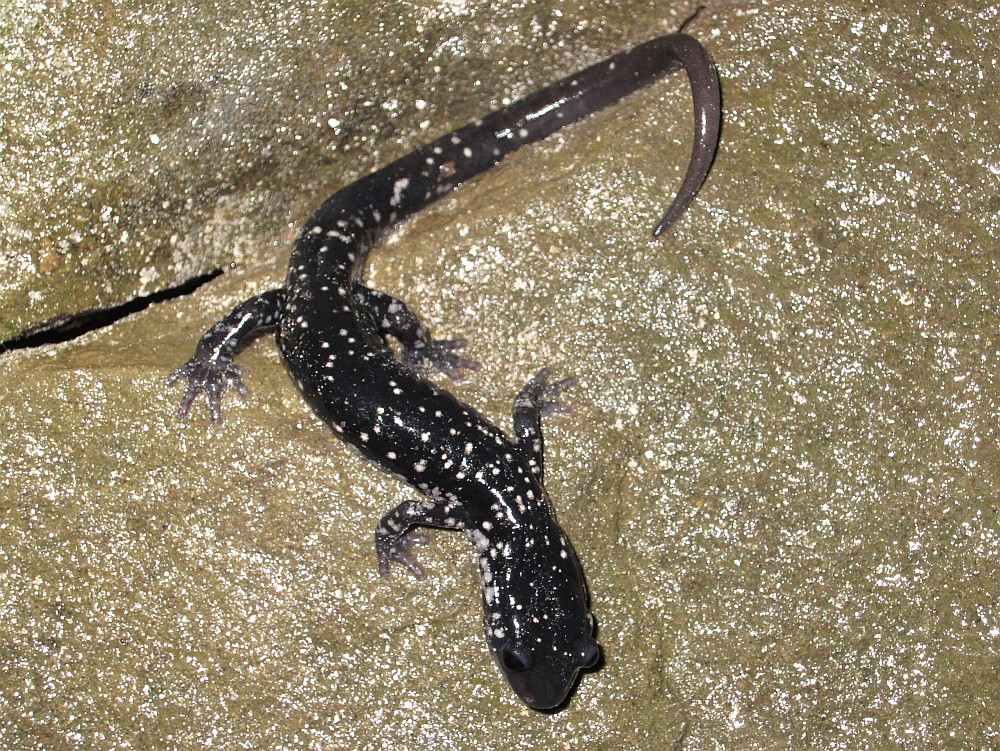 The night got even better when I found a few Eurycea l. longicauda (a personal favorite). 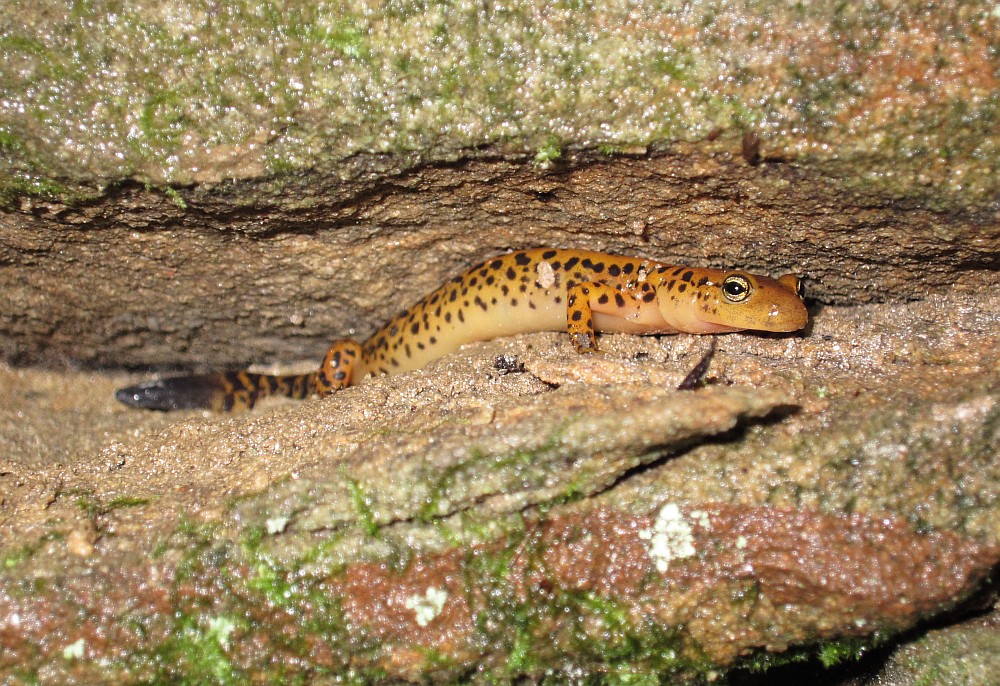 Unfortunately that's when the battery finally died for good in the new camera. I brought along my old standby for just such an occasion and it's a good thing I did, because there was one more nice surprise in store...

As we were hiking out, something caught my eye at the edge of a trail. Lo and behold, it was the second enormous female E. l. longicauda I've found in recent years.

If my measurements are correct, she was exactly 1 centimeter shy of the record length for the species. I found one in a cave about a year ago that was 5 millimeters shy of the record. Record-breakers or not, it's exciting for me to find such big girls with complete tails.

So that's about it. We didn't find any timbers, Aneides were conspicuously absent, and we kinda hoped we might spot a mudpuppy in the stream...but all things considered I had a great time even though my sleep cycle is severely compromised now. Overall I'm very happy with the new camera's performance since it puts my old one to shame. Unfortunately my short list of herping buddies is now one shorter, so it'll be harder for me to go on outings like this in the future. I'll leave you with a few parting shots I took during the day for the sake of variety. Sceloporus undulatus hyacinthus: 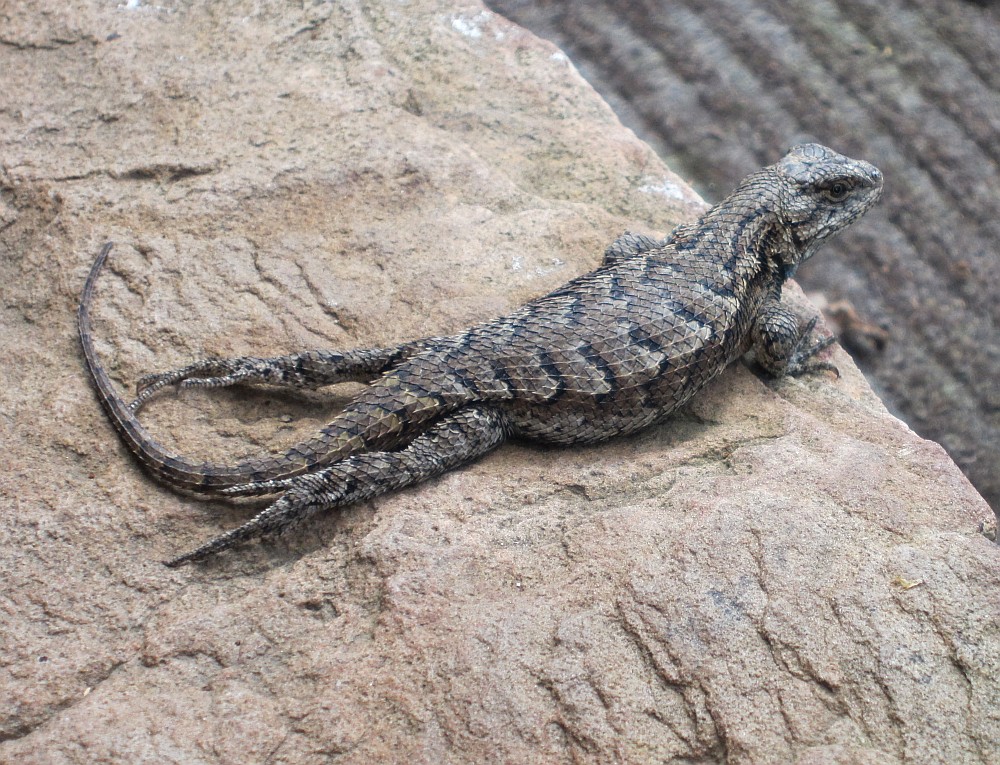 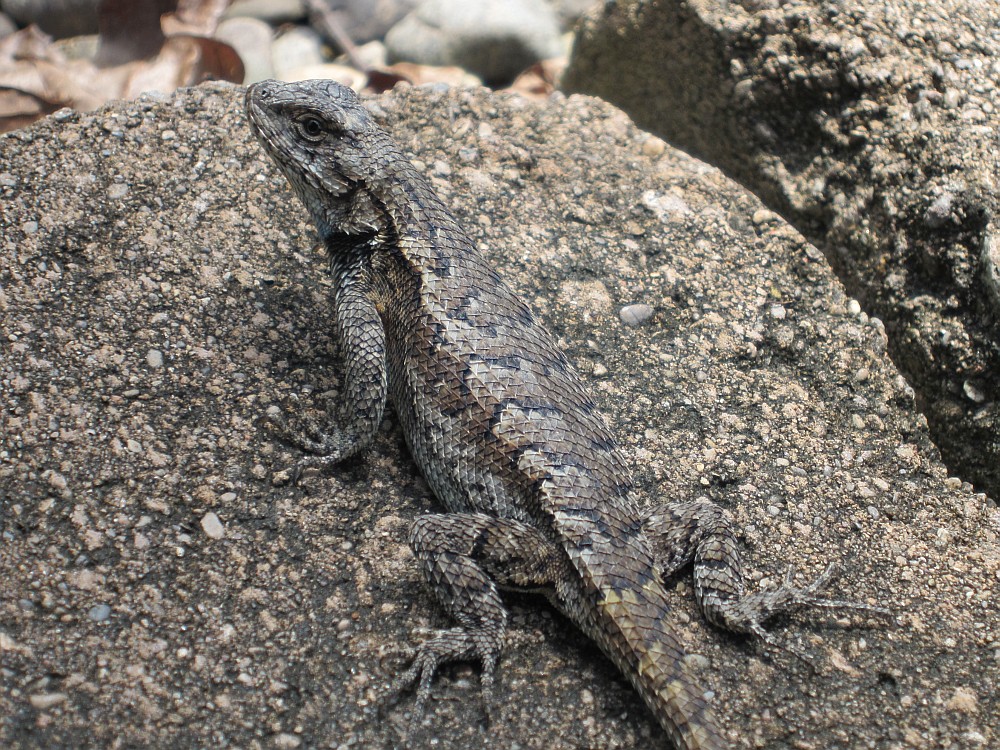 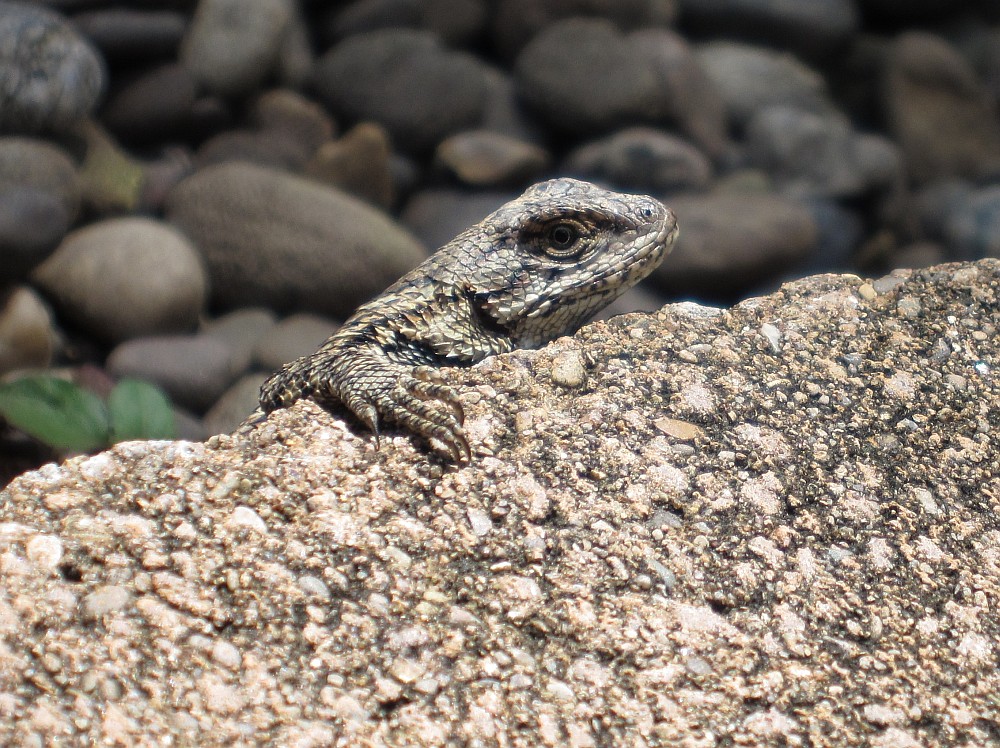 Man that looks like a great area. Love the desmog's, orange under their eye's patch.
I recently located a close by population of lucifiga. I haven't located any longicauda, they must tend to be larger.

I'm surprised to see the copperhead hanging out in pristine, cool drainages.

Sweet man! Sad to see Scott leave for sure, look us up in the fall - we're making a trip down that way! btw, that first monticola is funky looking - cool shit. Found my first longicauda last night - about 20 of them - awesome manders for sure. I saw a guttolineata years ago in NC, still my favorite out of the group though.
Top

looks like a fun night, your new camera takes some nice pics. I think that salamander could have stretched for an extra couple centimeters
Top

Nshepard wrote:Sweet man! Sad to see Scott leave for sure, look us up in the fall - we're making a trip down that way! btw, that first monticola is funky looking - cool shit. Found my first longicauda last night - about 20 of them - awesome manders for sure. I saw a guttolineata years ago in NC, still my favorite out of the group though.

Will do, I've regretted not getting out more this year. I was waiting to see if anyone else thought that monticola was unusual. I'd never seen one like it, but I probably haven't seen as many monticola as your average herper either. E. guttolineata is a major interest for me-I was hoping to find some last time I was in Virginia, but didn't get much of a chance to look. I'd be especially interested in looking around contact zones between longicauda and guttolineata since I've seen a few pictures of interesting looking intermediates. Until I make another out of state trip, E. lucifuga will probably be my main priority though.
Top
Post Reply
5 posts • Page 1 of 1