There are 3 species of Crocodilians in the region. Black caiman are now quite rare and in the many trips I have taken to the region, I have only seen them once. None were seen this trip, but they are still sightings in the area.

In the larger waterways, these are quite common. They are easily found at night along the banks. There is also a very healthy population of them in the pond at Santa Cruz.

These are much less commonly found. I usually find one per trip, usually in one of the preserves on a night hike in one of the smaller streams that flow through. This is the only one seen this trip and was actually found at night near Iquitos. We did capture it to secure it for some photos.


Onto the lizards. Overall, we did fairly well this year. Anolis species are common throughout the forest. You find about an equal amount during the day as you do on a night hike. They are easier to photo at night! 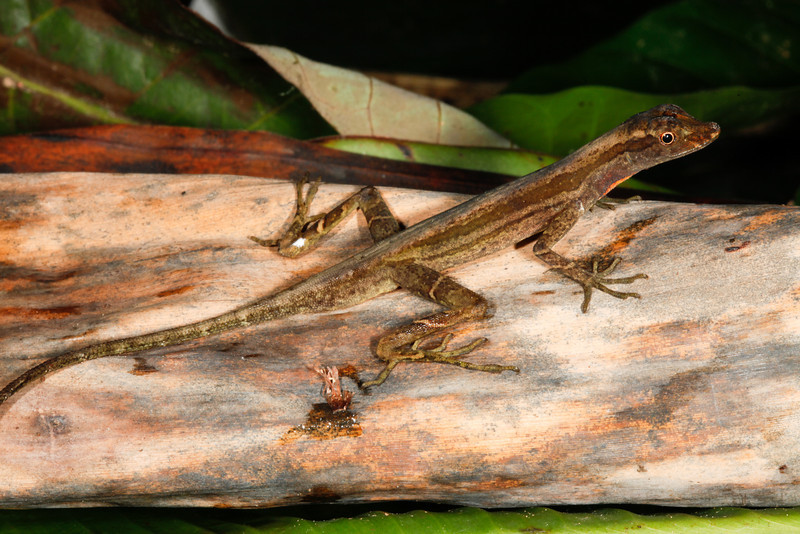 
These are spectacular, you never get tired of seeing them. The blue color of their eyes is just not too often seen! 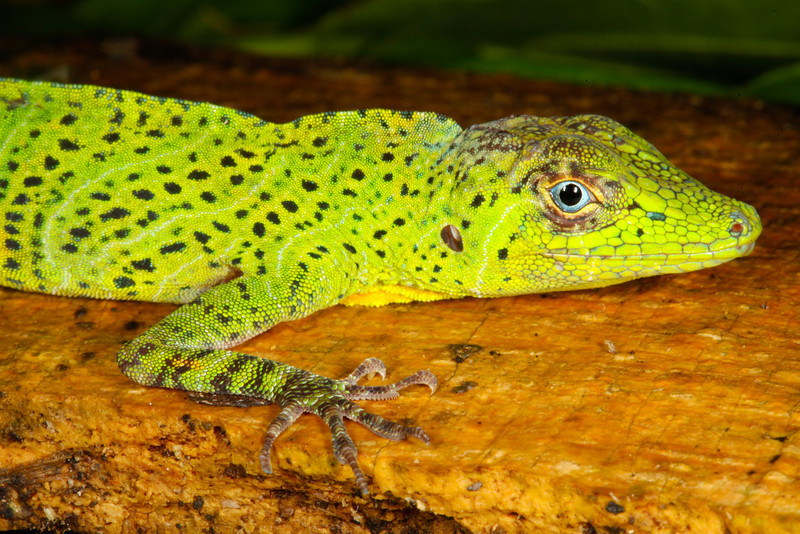 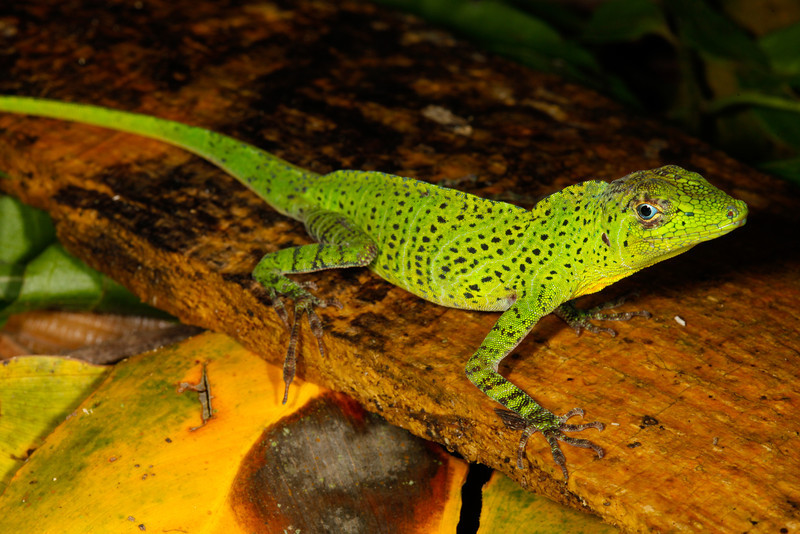 The equally spectacular Monkey Lizard. These act much more like chameleons. We only found one this year. 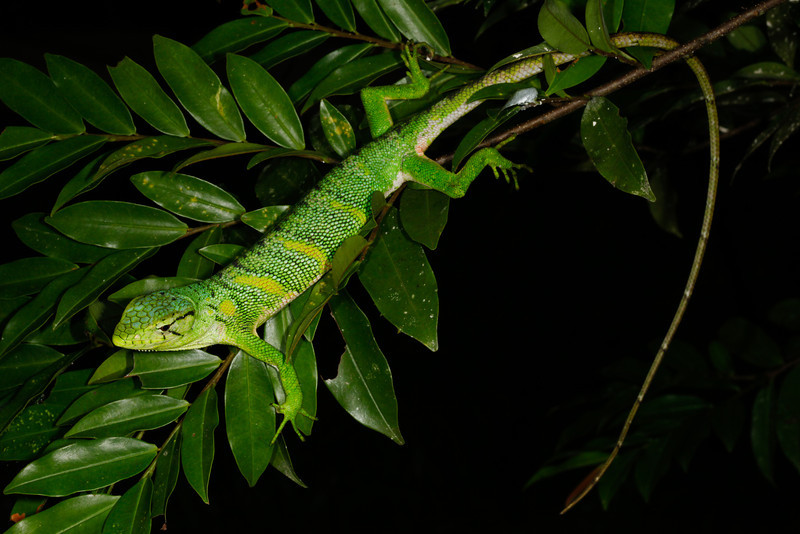 A quite common leaf mimic lizard found in the daytime.

Ameiva are much more commonly seen around Iquitos in disturbed habitat. You do see them occasionally in the forest at the preserves as well.

I have the toughest time getting photographs of these guys. I saw maybe a dozen this trip, but they are usually flashes through the forest. We did have a resident lizard that was huge and seen quite often, but very wary. They get quite big and are spectacular. This was the only photo I was able to get of one, and it was from a boat into the Rio Orosa.


Crocodile Tegus are spectacular lizards. We don’t see too many of them. John, AKA“Ribbit” was lucky enough to see two as he was kayaking on the Rio Orosa one day. He got incredible shots of one basking on the shore and then he saw this juvenile in the water. He made the incredible catch without turning the kayak so I was able to photograph it! 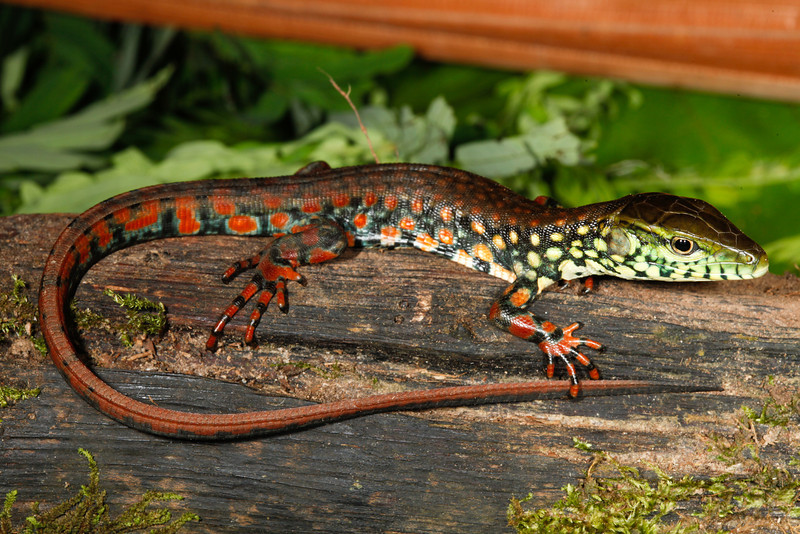 I seem to have good luck with Caiman Lizards. I have been with people who have made multiple trips without ever seeing any. Last year, I was able to get some great in-situ shots of one (see my previous posts) and we saw 4. This year, on our first full day at Madre Selva, I was walking with John and look up and there is a large caiman lizard crossing the trail in front of us (about 50 feet away from the bank of the Rio Orosa). I made a lunge at it as it ran into the forest could not get it. I then isolated it to a thicket and called for help. I remember Jake Scott helping me catch it. When he sees it in the thicket, he said “You said big lizard, I didn’t know you meant that big”. I started laughing as you would not want to get bit by these. We ended up catching it for photos and letting it go later that day.


You never get tired of seeing these and they live in the showers at camp! 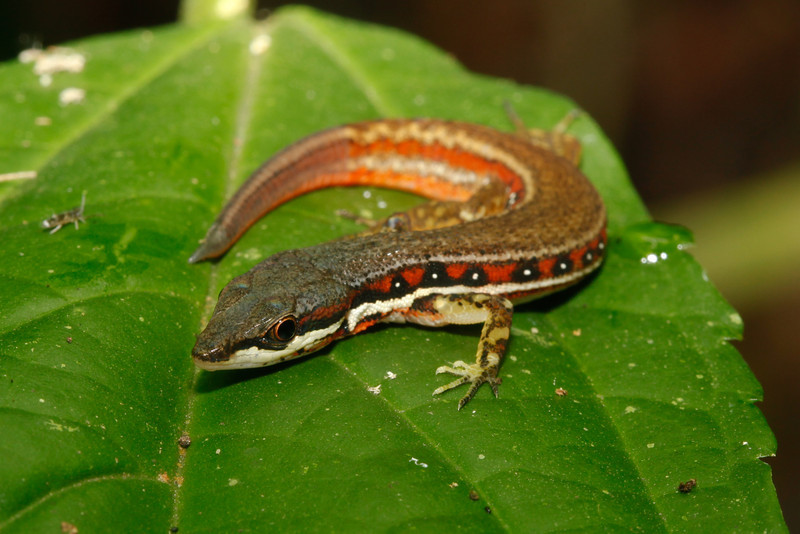 I say this on most of my Amazon posts. Turtles are just not commonly seen. We occasionally see a Yellow Foot Tortoise. We have seen Matamata Turtles and the local fisherman sometimes bring those in. There are a few species of aquatic turtles, but they are tough to spot. This year, here is what we found:

Thanks for looking! Part 3 coming up soon.
Top

I can't believe no one has commented on this yet, amazing finds! Great photography too, I know alot of those little lizards are very skittish and quick and often a pain to photograph, you did an exceptional job!
Top

Great post. Love all the lizards. I cant pick a favorite!!! One day I will make it down to South America.
Top

Awesome! As a true lizard fanatic I can only say " There are some truly stunning lizards out there!".
Top

That Caiman Lizard is awesome. Thanks for a very informative post.
Top

following your posts and enjoying them, thanks for taking the time.

I was not quite ready for this much diversity, for a while it seemed like the only reptile from the trip was a lone bushmaster.

Great stuff Matt! I cant wait for the last installment. I wish I could have made it down again and am jealous of the Polychrus and Crocodilurus. But I am extremely jealous of the Podocs. Where were those found?

This was an amazing post. The lizard photography is excellent! I haven't seen a Caiman Lizard before so that prehistoric thing was a shock to see.
Top

Haha, that might be the only photo in existence of me smiling. Thanks Matt!
Top

This and your last post are awesome! Loving all the frog shots and the one of the caimen lizard is great!
Top

It WAS a big lizard! haha. That caiman lizard was most definitely a highlight!
I'm a lizard guy and you done did it justice.
Can't wait to go back....someday!

You've outdone yourself. I really liked every shot, but was really happy to see the Golden Tegu. Probably 12-15 years ago I used to keep a colony of these beasts. I am so impressed to see how they're gorgeous markings work as camo. The crocodile Tegu was really neat to see, and wow so many cool anoles.
Top

Thanks for all the replies!!!!

Kevin, we saw one Podoc on the Amazon. We could not get turned around for a better look or photo. One was brought into camp by somebody......I don't know who. It was from the Rio Oroas. The others were from around Iquitos.

Jim, I'm glad I got one of you smiling!

Dick, I got about a 10 second look at the Tegu before it was long gone. Luckily I had my backup camera with me and I got a shot. It is not a good shot, but it is better then anything I have gotten prior.

Jake, I also loved that Caiman Lizard, will always remember that encounter! Thanks for adding to the memories!
Top