I spent most of this week reef-snorkeling with the family off Taiwan's prison-studded, but otherwise very tropically-dreamy Green Island, where I saw (but didn't photograph) a sea krait as well as a few very rare and equally weird stick insects (photos later). But apart from the sea snake, there wasn't much herping, so here's an account of a beast I found the day before our departure last Sunday.

The arboreal Big-Eyed Cat Snake, also known by the less awkward name Boiga kraepelini, is what I call a true trash snake. Its long, thin body doesn't lend itself to good, frame-filling photo angles, unless you manipulate it into little bunched-up, curly poses. However, while this is easily accomplished with most colubrids, it's a P in the A to achieve with this species, as it's (a) rear-fanged = mildly venomous, (b) pretty aggressive on the defense, and (c) constantly on the move, i. e. almost impossible to calm down. It comes in two phases - the rarer, very pretty grey-black-yellow phase, and the unfortunately much more common light brown (think baby diarrhea or cheap American mustard) version, which I find quite unattractive. All those factors combined make me pretty much ignore this species whenever I find it.

This one, though, was special. The usually B. kraepelini I find are hardly ever any longer than four feet, but this guy certainly approached the maximum recorded length of 160 cm (5.24934383 feet). As is almost always the case when I encounter species that beg for assisted photography (= somebody who keeps the &%$#@! things still!), I was herping alone when I found this specimen wandering across a lonely mountain road. What followed was a beautiful dance combining and mutually complementing the natural graces of man and animal....a dance I was glad nobody witnessed: on this side of the stage the lumbering, 275-pound human wielding a heavy Pentax with an even heavier 70-300mm lens plus huge flash in his right fist while using the snake hook in his left to keep the serpent from getting away and in focus simultaneously; on the other side the lithe, elegant, and tirelessly moving reptile that kept slithering into and out of the ditch, off and back onto the road, and up, up, up the roadside wall....

) Nice pics, but couldn't you have taken the length out to a few more decimal places? Dude, you're getting sooo lazy...

Now, as for the stick insects, bring'em on!
Top


John Martin wrote: Nice pics, but couldn't you have taken the length out to a few more decimal places? Dude, you're getting sooo lazy...

Complain to Google. That was all they would give me.....
Top

Cool stuff Hans. You should never ignore Boiga you know, it's a very interesting genus of snakes!
Top

If I saw mustard that color I sure wouldn't eat it

TNWJackson wrote:You should never ignore Boiga you know, it's a very interesting genus of snakes!

Yeah, but we're saddled with the ugliest of the bunch over here

Seriously, apart from being biologically/ecologically interesting, I think they're a true challenge for photographers. I used to think that this snake just didn't have any visually aesthetic value. But then I saw this photo, and I realized that as a photographer you just have to constantly visualize how you might improve your subject, and this guy certainly nailed it. God knows how much time he spent on the shot, but it was worth every minute.

You know that little photo composition exercise where you stake out a square foot of lawn and try to photograph it from as many angles as possible? That is certainly a valuable approach when photographing things that are visually nothing more than fleshy little ropes. The trick is to make the rope come alive by shaping it into interesting poses and adding different backgrounds.
Top

I have to say I always think of snakes (and other herps) with chunky heads and big eyes as being particularly photogenic.

I'll admit though, some of the long, stringy Boiga are more difficult to photograph than the larger/ heavier species - I remember B. drapiezii being a bit of a pain to photograph! Unfortunately my good shots of Asian Boiga are all slides (so you'll have to take my word that they're good

In all seriousness though, I think B. dendrophila is about as photogenic as any snake out there.

That B. kraepelini photo you linked to is a good one for sure, just a matter of getting it to curl up under an ice cream container with its head in the middle of the frame I think (easier said than done sometimes I know!).
Top


In all seriousness though, I think B. dendrophila is about as photogenic as any snake out there.

Well, that goes without saying, doesn't it? It's the bloody Taj Mahal of Boigas.....you can get impressive pix of it even with a pinhole camera in a rainstorm, with your wife and the kids whining "can we go back to the hotel already?". You surely wouldn't compare its magnificent attire to the slithering drabness that is B. kraepelini!


That B. kraepelini photo you linked to is a good one for sure, just a matter of getting it to curl up under an ice cream container with its head in the middle of the frame

Ice cream container...that's a good idea! Probably much easier to handle than my usual hidey-hole-of-choice, my floppy bush hat.

By the way, we found another B. kraepelini last night....jumping onto the road from under the hood of a truck parked by the roadside. A very disturbing sight, to say the least!
Top

Since some other Boiga have been shared here's a teaser for an upcoming post......Boiga ceylonensis 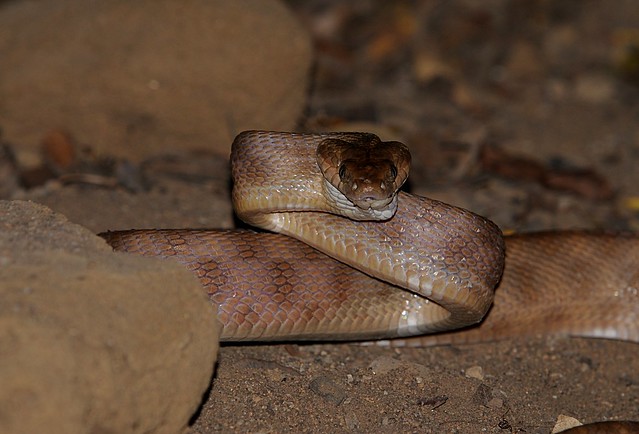 That is very cool tai haku - I'm really looking forward to a post of some of Sri Lanka's (or India's) herps now!
Top
Post Reply
10 posts • Page 1 of 1