In a recent post, I wrote that "Taiwan is home to three species of coral snakes - Sinomicrurus sauteri, S. hatori, and S. macclellandi, all of them endemic to the island. Like their American cousins, they're as beautiful as they're difficult to find: they're all small, nocturnal, rare snakes that spend most of their life beneath leaf litter, where they look for other small snakes to eat."

After the immense stroke of luck that was my encounter with a juvenile S. hatori in the daytime a few weeks ago, the Fates granted me another rare find: an adult S. macclellandi that was crossing a mountain road behind my house around midnight last Friday. I was overjoyed, as the first two times I found this species didn't yield any good photos to speak of: the first time I didn't yet own a macro lens and barely made do with a 70-300mm zoom, and the second time I was about to haul out the camera when two cops drove by and inquired about that colorful worm dangling from my snake hook. I told them what I knew about this protected species, and they thanked me for caring so much about Taiwan's wildlife, but I sensed that they wouldn't let me leave before I'd released the snake, so I did and returned home with an empty memory chip. This time, however, I quickly swept the beautiful serpent into a bag and returned home looking forward to a weekend of proper macro photography.

The next morning I was up early, and like a child on Christmas morning, first went into my office where I keep all my snakes to admire the coral. To my immense chagrin, the small plastic terrarium in which I had housed the snake overnight was empty, and the inmate nowhere in sight. It turned out that the tape on one of the larger ventilation holes that I had taped off had loosened - and the snake had found a way to wiggle under the tape and leave for greener pastures.

Now, having a coral snake on the loose in the house might not constitute a five-alarm event like, say, a de-caged cobra or mamba, but in spite of their docile disposition and general aversion to defensive bites, people HAVE died from the bite of Sinomicrurus macclellandi - notably Swiss (?) herpetologist Hans Schnurrenberger; "the initial bite was ignored until neurotoxic symptoms showed up 6 hours later, and death was 8 hours after envenomation" (B. G. Fry et al., 2003). There is also no antivenin in Taiwan, because hardly anyone ever gets bitten by this species, so we were left to our own devices. Tearing apart the clutter box that is our house to find the snake would have been useless (too much clutter!), so I opted to wait until nightfall and see if the snake would come out on its own. I gathered the family and instructed them to (a) wear slippers in the house at all times, and (b) watch our two cats for signs of stalking or staring into dark corners, because the pair had led us to escaped snakes in the house before.

So, instead of getting all sweaty and dirty searching the house for the escaped elapid, we did the sensible thing and spent the day at the beach instead. And the gamble paid off: upon our return around eight PM that night, we found the snake sitting in the middle of the living room, flanked by our two highly skeptical-looking house tigers who obviously weren't sure whether to play with the strange worm, or rather leave it alone.

With great relief I moved the snake back into its (now reinforced) tank and prepared my little "faux nature" studio for the next day (see last photo). It's basically a large, flat plastic basket for sun-drying herbs outside, filled to the rim with dry leaves. With this I can create different backgrounds by substituting the leaves with sand or rocks or moss. The shape of the basket allows me to conveniently rotate the subject into better positions, if need be.

Sunday morning I finally set out to photograph the snake, first inside with artificial illumination, then outside in the morning sun. The shoot went well, considering that the snake constantly tried to bury itself under the leaves. I'd pick it out again with soft tweezers, place it under an aluminum rice bowl, wait a minute, lift the bowl and fire off a few shots at the resting beast before it started burrowing again.

All went well for a while, until all of a sudden the snake slowed down in mid-slither, slowly turned its belly skyward, opened its mouth, protruded its tongue, and generally did its best to convey the illusion of being dead......and then I realized to my utter horror that it actually, really had died, right in front of my eyes. Previous to its sudden demise, there had been no signs whatsoever of the animal losing steam or being sick, so I initially blamed myself for exposing the poor critter to excessive stress. But could that be? I've photographed my fair share of snakes over the past two years, and I'm always gentle with them, and never abuse them in any way just to get a better photo. Plus, all of them seem to be quite hardy when subjected to photo sessions. Finally, when reviewing the photos, I discovered a deep wound about two inches from the head (see photo second to last ). The snake had already been injured when I took it home, and would probably have succumbed to its injuries in the wild just as fast.

I'll never know, but it still breaks my heart. 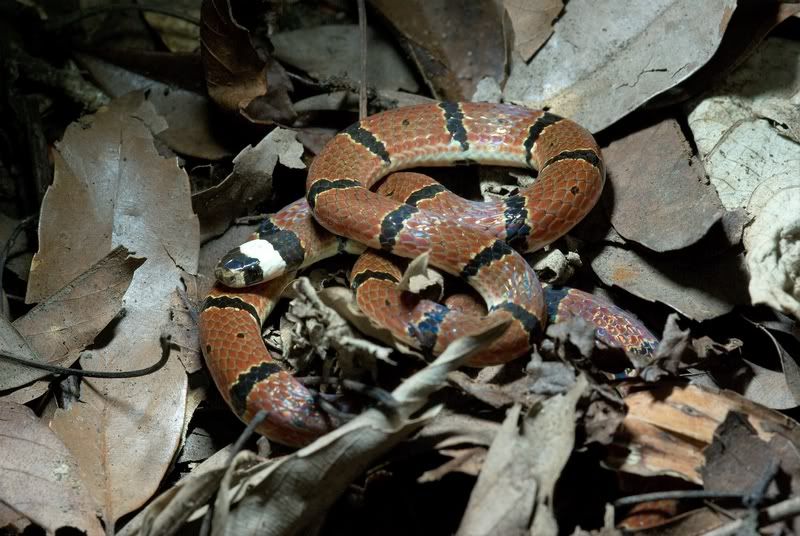 Not to make you feel guilty again, but do you think there is a chance one of your cats inflicted the wound on the snake? I guess we'll never know and it is a shame either way. I think it would be ok to relieve yourself of the guilt and assume that it had the wound all along, maybe that's why it was out on the road in the first place?
Top

Very handsome snake and entertaining story, although if a venomous snake go out in my house, i'm fairly certain my wife would be in a hotel until it was recovered and once it was, i'd be in a tent in the backyard.
Top

sorry to hear about that... but you should note that S. macclellandi isn't endemic to Taiwan - at the species level (i.e. Sinomicrurus macclellandi), it has a pretty wide range extending through most of mainland China. The subspecies S. m. swinhonei is endemic to Taiwan (your website points this out), but the species S. macclellandi isn't endemic to just the island. I was looking ALL over trying to find that species (S. macclellandi) - it would be amazing to find/ see one. Again, sucks. Maybe next time you'll find a S. hatori!!! I think that is the most incredible of the 3
Top

Did you pickle it?

I've had a snake die before despite no rough handling. I also had a snake act very ill after being pulled from under a rock and into the hot sun... but after a few minutes in the shade it seemed to recover. Some snakes just seem kind of puny. You've got an amazing series going here!
Top

Thanks for the comments and condolences, guys!


but do you think there is a chance one of your cats inflicted the wound on the snake?

I had the same thought, but as far as I can judge it, that wasn't the case. I know my cats' body language quite well, and when we arrived home, they were still at the staring stage (head pulled back, eyes squinting, body ready to jump away in case the worm should suddenly become uppity) and hadn't started batting the snake around yet.


if a venomous snake go out in my house, i'm fairly certain my wife would be in a hotel until it was recovered and once it was, i'd be in a tent in the backyard.

My wife is amazingly cool about these things. When the snake was still AWOL, she asked me matter-of-factly, "so, there's no antivenin...does that mean we're doomed when we get bitten?". I explained to her the nature of the animal's neurotoxin and said that as long as the victim receives artificial respiration, things should work out OK. "Oh, then it's not all that bad", she said; "at least it's not an instant death warrant..." Damn, I love that woman.....

The subspecies S. m. swinhonei is endemic to Taiwan (your website points this out), but the species S. macclellandi isn't endemic to just the island

You're right, of course, and I was aware of that, but didn't make it clear. My bad - apologies for my sloppy phrasing!!


Maybe next time you'll find a S. hatori!!! I think that is the most incredible of the 3

I already did a few weeks ago! Look no further than here

Did you pickle it?

No, I just buried it in the compost heap like all the other critters that die around our house (mostly at the hands of our cats). I live in the sticks, and pickling it would have required a day trip to Taipei City to buy formaldehyde (not to mention that I don't have the slightest idea about how to do it). It would surely have made a handsome specimen for some university/museum collection, but it just wasn't meant to be.
Top

Very cool find Hans, shame about the ending but these things do happen.

I've had similar luck with an escaped elapid in my house before (nothing quite so venomous though!) - it feels too good to be true when you open the door and they're just sitting there in the open, just as you'd hoped.
Top

UPDATE: It's come to my attention that I might have fallen victim to an elaborate scam known as thanatosis, aka "playin' ded". The reason that I declared the snake deceased wasn't so much its upended belly and protruding tongue, but the fact that after about a minute the entire body stiffened like a wire. Not being a physician, I thought this to be rigor mortis and chucked the snake on the compost heap. After reading a discussion on thanatosis in African elapids on a German snake board, though, I now have massive doubts about the coral snake's death, because certain African cobras and related snakes actually fake their demise so well that their entire body becomes completely rigid. Add to this the fact that rigor mortis takes hours, not minutes to set in, and I guess I can say with almost complete certainty that I've been had. Good thing I threw the snake on the compost heap instead of pickling it - the little bastard probably has been happily hunting earthworms, lizards and other little compost-dwelling critters since the incident, grinning like a Cheshire cat over its cleverly gained freedom....
Top

Hans, very cool snake! I was about to point out a puncture or bite mark/gash on the 13th image. (the one above the plate) It is four black bands behind the head. But see the issue appears to have resolved itself.
Thanks for giving us a look.
Tim
Top
Post Reply
11 posts • Page 1 of 1