I have a list of different threads I'm gonna start, spreading them out every few days. Each one will have a different theme. I would appreciate if you'd follow the rules (more like guidelines) just to keep it fun. eg. Ya know how people put up "Post your favorite picture of the year" threads, and people HAVE to put up like three pictures. Let's pay attention and try to stick to the rules. As winter creeps in, I will keep starting new threads and we can have fun with this while we look out the window at the leafless trees with tears in our eyes. If you have any ideas, feel free to PM me. Of course, I don't care if you start your own "themed" thread, but I was taking it upon myself to plan out these threads over the next few weeks as I have seen the forum die off along with the herping. *Don't let these "End of the Year" threads have any effect on any end of the year summary posts y'all were planning on doing. These will all have specific themes. I'm also hoping this will bring some of the non-posters out of the woodwork to share a photo or two. (You know who you are.). It's an opportunity to just share photos with peers, despite our herping/conservational differences. I don't mean to call you guys out and mean no offense. Just think about sharing here and there if you can with sound mind. I look forward to everyone's posts. Let's make this fun because its getting boring outside!

1. Go back through your finds over the year and review your salamanders.

2. Post your favorite three sally shots. This is up to you how you would like to do it. It can be three of the same salamander, or one each of three different ravines (If you are Jason P). Let your year's experience determine how you post.

3. Give some kind of explanation as to why you chose what you chose... eg. This was a super cool redback, or this four-toed had five on the one foot, or I don't like gummy lizards, but I ran this marbled over so I figured I'd take a picture.

4. If you only have one pic that you deem worthwhile, then please feel free... The max is three. There is no minimum.

I'm not gonna come up with some corny line here, so just do it:
Top

I am fortunate to live so close to the Appalachians that viewing numerous species on a single weekend isn't hard. Here are a few of my favorite shots from this past year, which coincidentally, are my favorite species to seek out every year and observe. 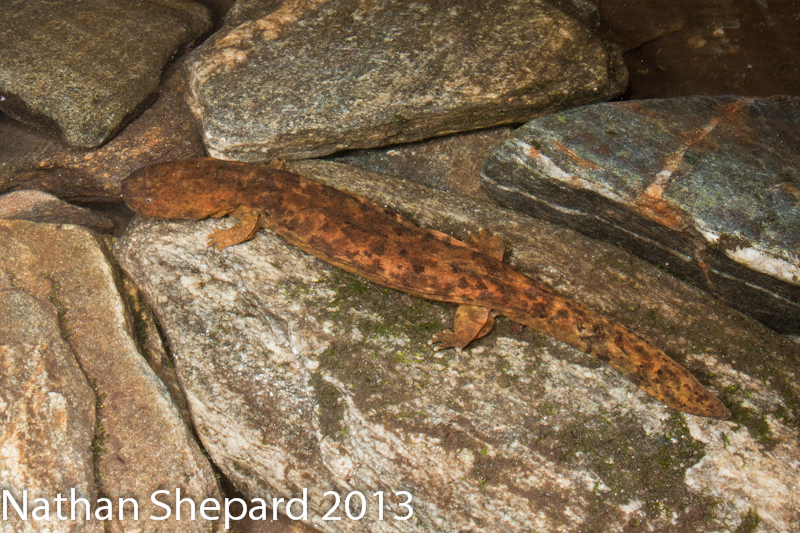 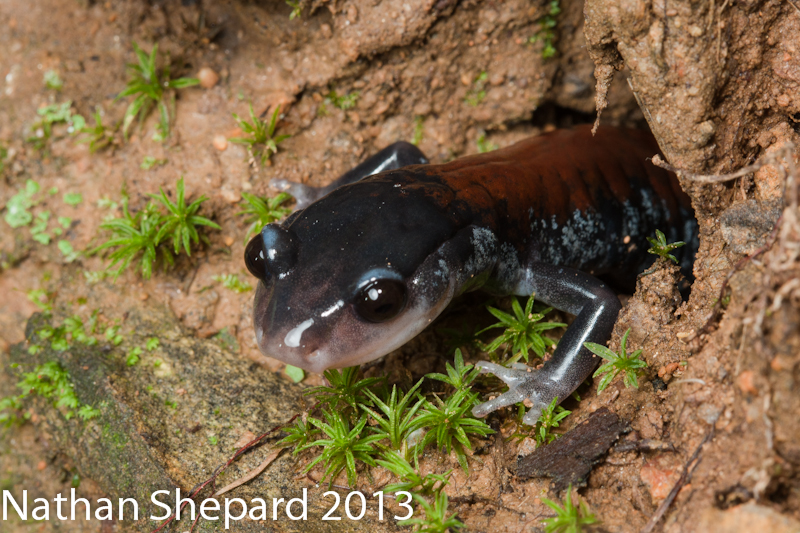 And my only real US salamander lifer this year (I've seen the southern member of this recently split species group D. wrighti before but not until this year have I observed the more northern members of what is now D. organi).
Northern Pymgy Salamander - Desmognathus organi: 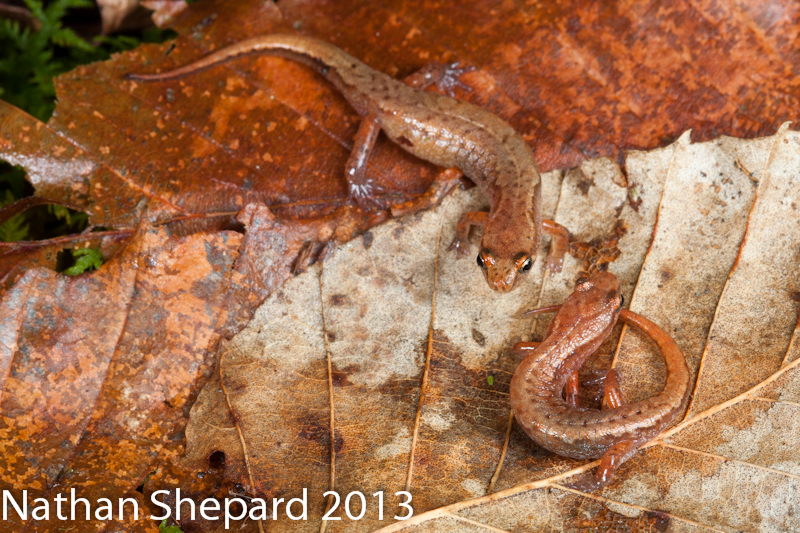 ugh Nathan, super jealous of that yonahlossee, thats such an awesome sal

I got more lifer salamanders than any other herp this year, mostly thanks to other people (thank you other people

Not a lifer, but my favorite salamander ive seen (thank you 3rd person) 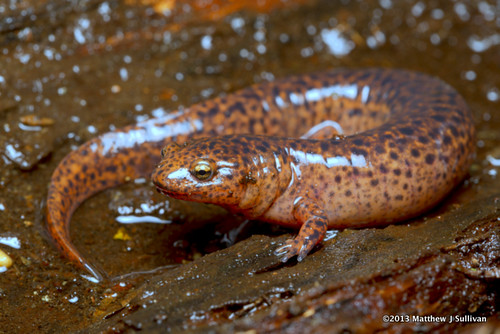 Now this is more my speed.

This I'll start off with a this year's lifer. Been a long time trying and almost as much failure, but this one time. This is the reason I like the photo.
Flatwoods Salamander (Ambystoma cingulatum) 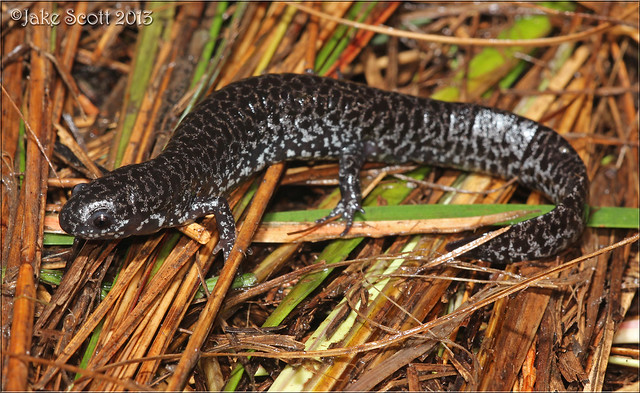 I like this photo because it took a long time to get this constant mover to sit still...and it's a cool newt.
Striped Newt (Notophthalmus perstriatus) 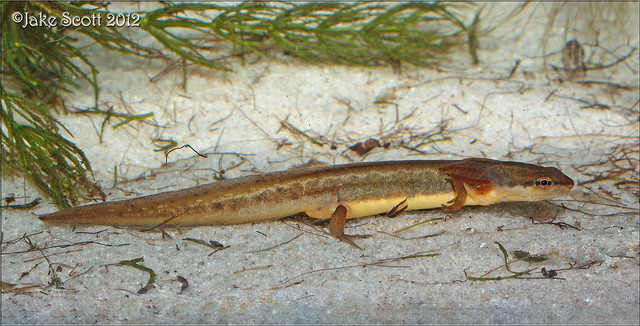 Found this salamander crawling on a leaf about 2 feet off the ground along an Amazonia trail. Lifer and definitely a happy sight to behold.
Amazon Climbing Salamander (Bolitoglossa altamazonica) 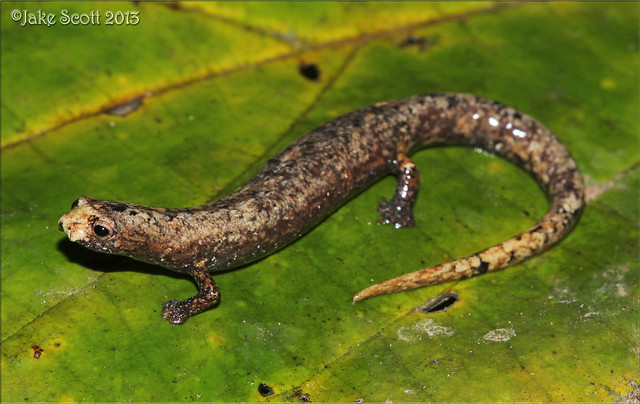 Salamanders have become my favorite herps to find and look for (despite my username.)
This was the highlight of a trip through MO and IL this fall. Me and a friend had been searching in and around a vernal for about a half hour when I heard a hurl of expletives from the forest. He came running out with this beauty! 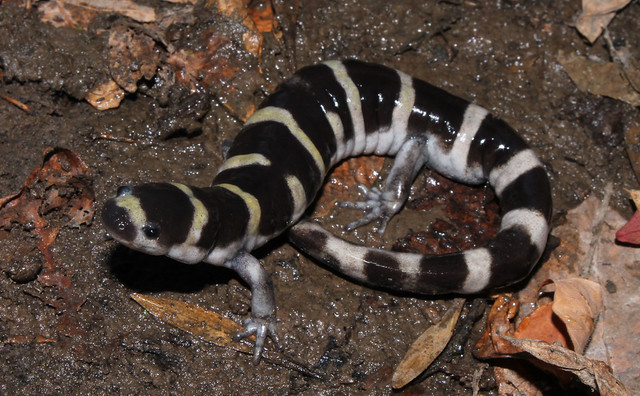 I was pretty satisfied with this shot of a newt.

This Smallmouth represents hours of searching and log flipping in an area I was sure had to have them. Sure enough, I eventually turned one up. 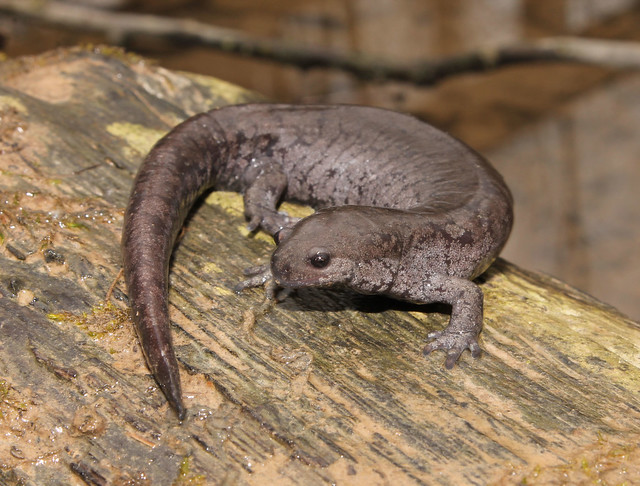 Hellbender was by far my best sighting this year, but I already posted my shots, and they aren't that great anyway, so here are some others from that same trip. Blue Ridge Two-Lined Salamander on Stinging Nettle. As found, in North Carolina. I love finding salamanders out crawling at night, and seeing this one perched on a plant was awesome. Cave Salamander, Virginia. A hard-won shot of a jumpy animal (you can see he's preparing for launch). Eastern Hellbender: And a life long dream has been completed.

I'm a sucker for behavior so this one takes the cake for me.

From Petranka, 1998 (Organ, 1960a) regarding courtship behavior of Plethodon glutinosus in Virginia:

"When a male encounters a female, he places his nasolabial grooves and mental gland in contact with her head, body, or tail. The male then engages in a 'foot dance' in which he raises and lowers his rear limbs either alternately or simultaneously. When raising the limbs simultaneously, the tail is used as a brace to support the body. As the dance proceeds, all four limbs are raised and lowered as if the male is marking time. The male proceeds toward the female's head. While moving forward, the male repeatedly rubs his nasolabial grooves on the female, then gently grasps her body or tail with his mouth. His grip is maintained for a short period of time, then released.

The male eventually reaches the head of the females and moves his mental gland over her head and nasolabial grooves. He then pushes his head under her chin and passes beneath while maintaining contact with the chin with his body and tail. Foot dancing continues throughout these early stages of courtship. The male undulates his tail as it passes under the female's chin, then stops his forward progress. The female straddles the tail and the pair moves forward and engages in a tail-straddle walk. During the tail-straddle walk the male undulates his tail and often flexes his body laterally to slap the snout of the female with his mental gland. The tail-straddle walk is prolonged and may cover a linear distance of > 5m.

Prior to spermatophore deposition the male stops moving forward and begins rocking his sacral region laterally. The female moves her head laterally in synchrony, but counter to the direction of movement of the male. The male lowers his vent to the substrate and deposits a spermatophore. He then raises the vent and flexes his tail to one side. The couple then moves forward with the female keeping her chin against the tail base of the male. As the female passes over the spermatophore she picks up the sperm cap with her cloacal lips. The couple usually breaks up shortly thereafter."

This photo was taken at the stage where the male was in front of the female performing his foot dance, while she straddled his tail.
11:46pm 9/20/13 SW Virginia at ~4,100 ft 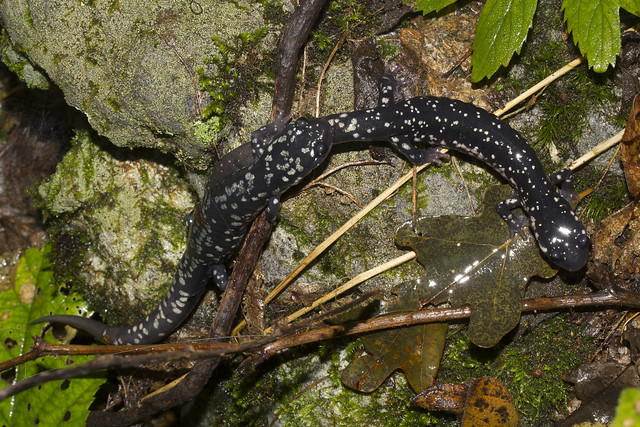 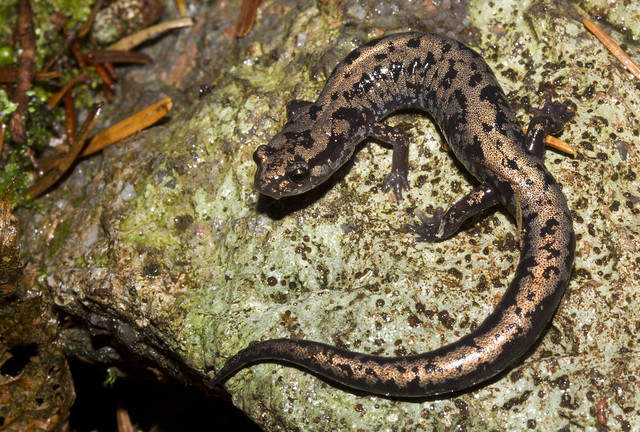 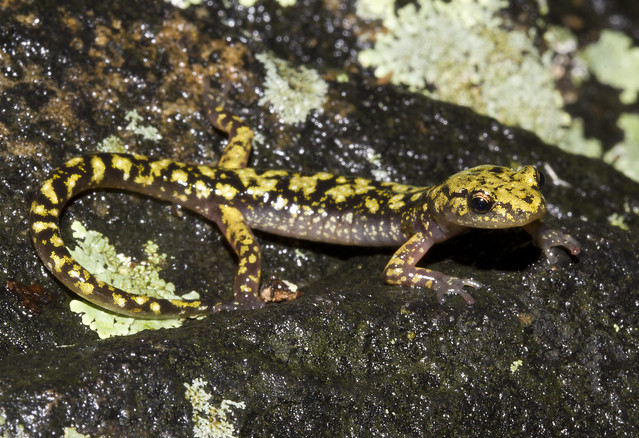 in ambush/ in situ 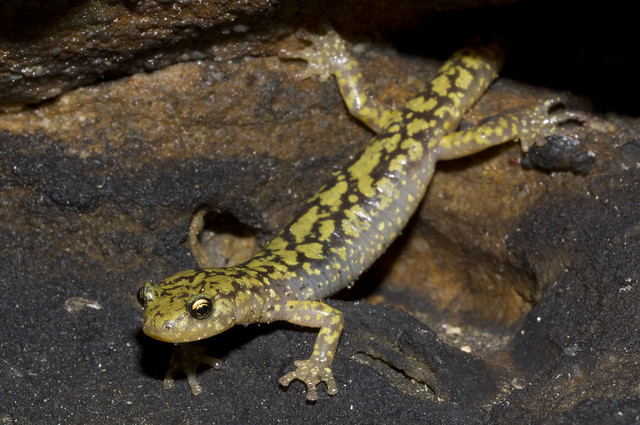 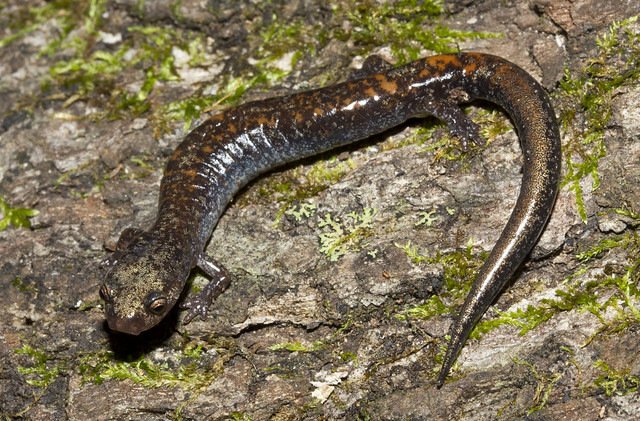 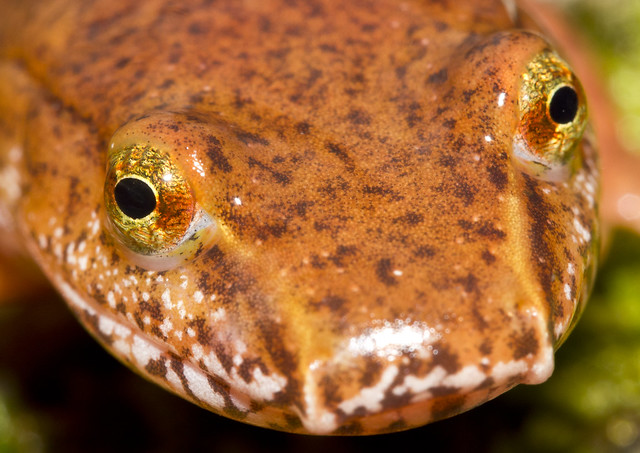 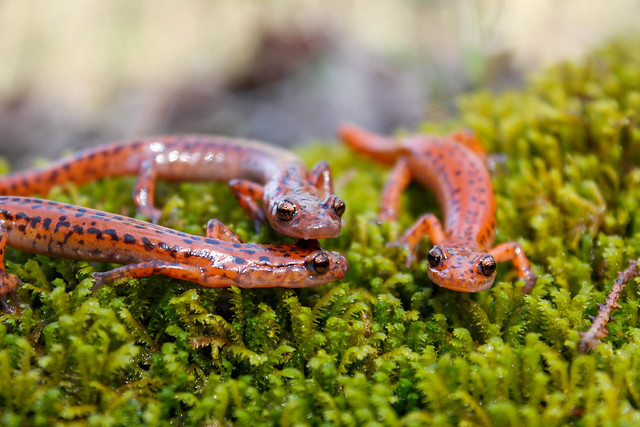 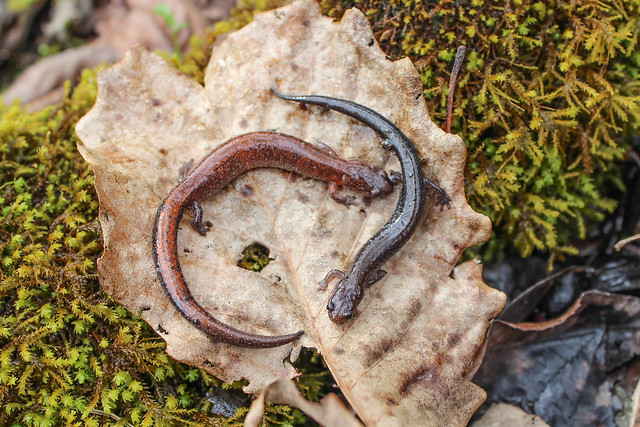 One of my favorite shots of this year because it captures behavior. When i flipped the rock this Southern two-lined salamander was under, he snapped into this anti-predator position! Mmm! LOVE IT! 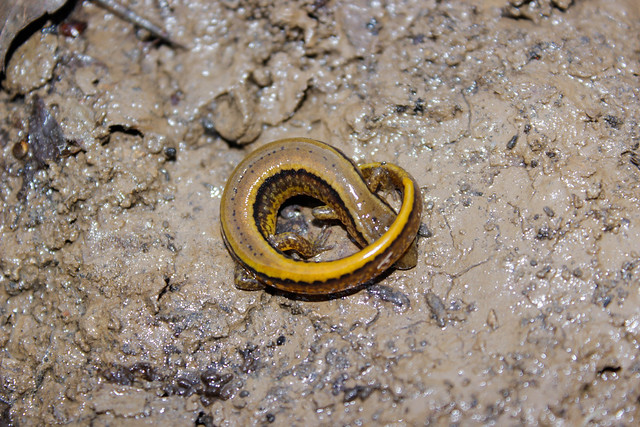 4. If you only have one pic that you deem worthwhile, then please feel free... The max is three. There is no minimum.

Sorry, didn't see this.
Took out some.
Top 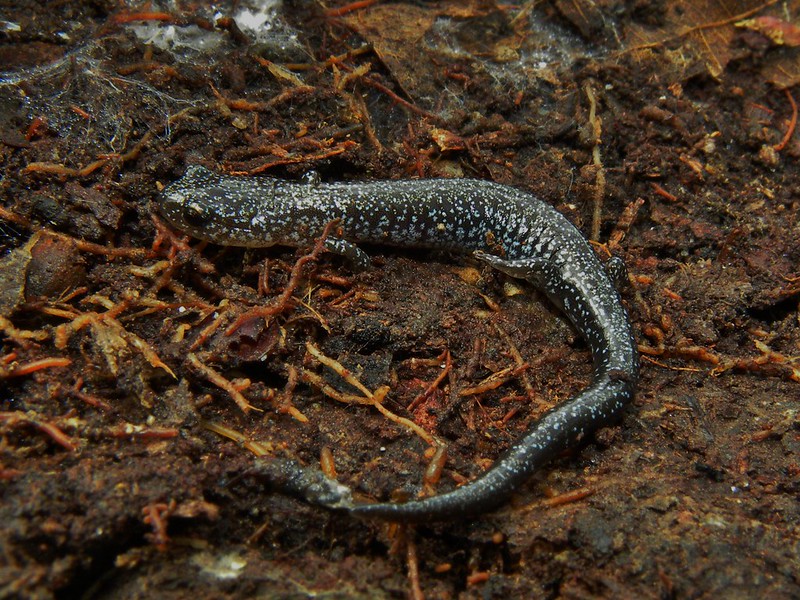 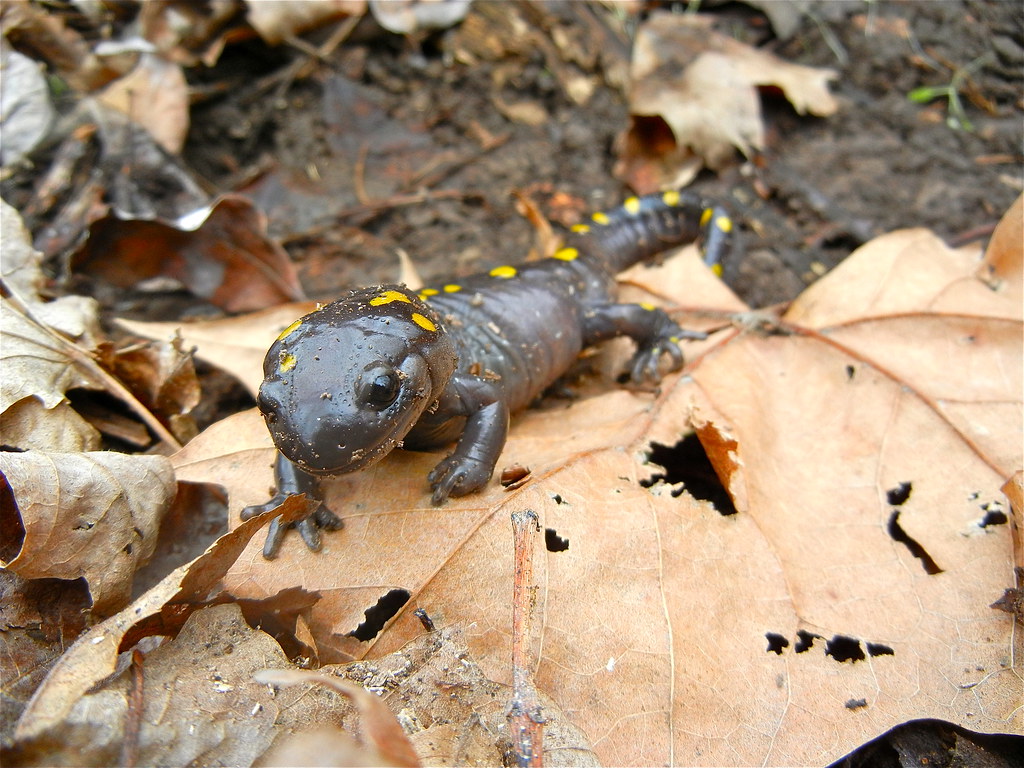 Spotted Salamander about 10 minutes before it started snowing. 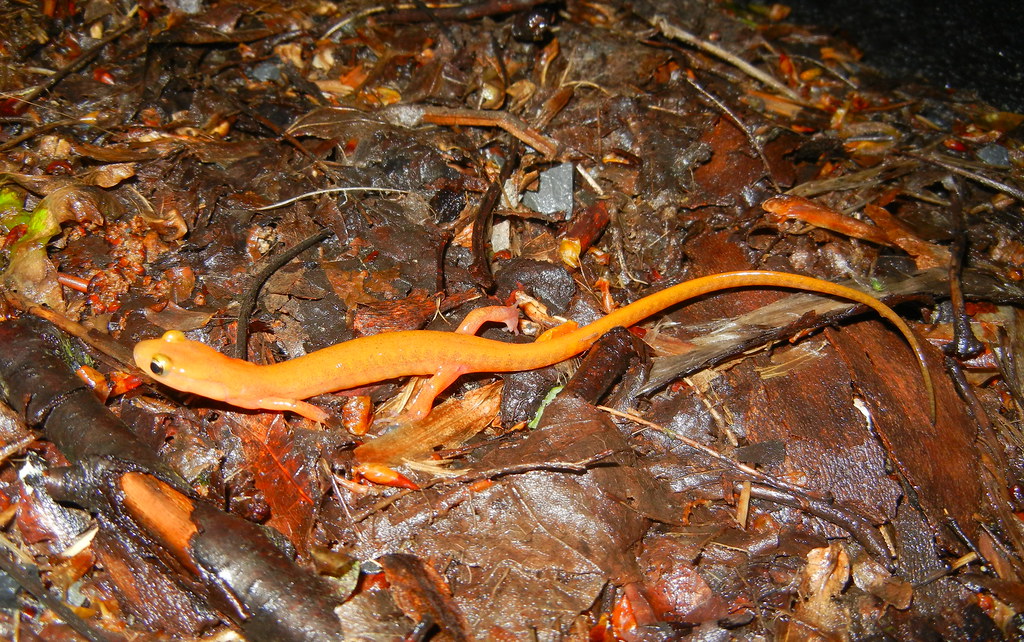 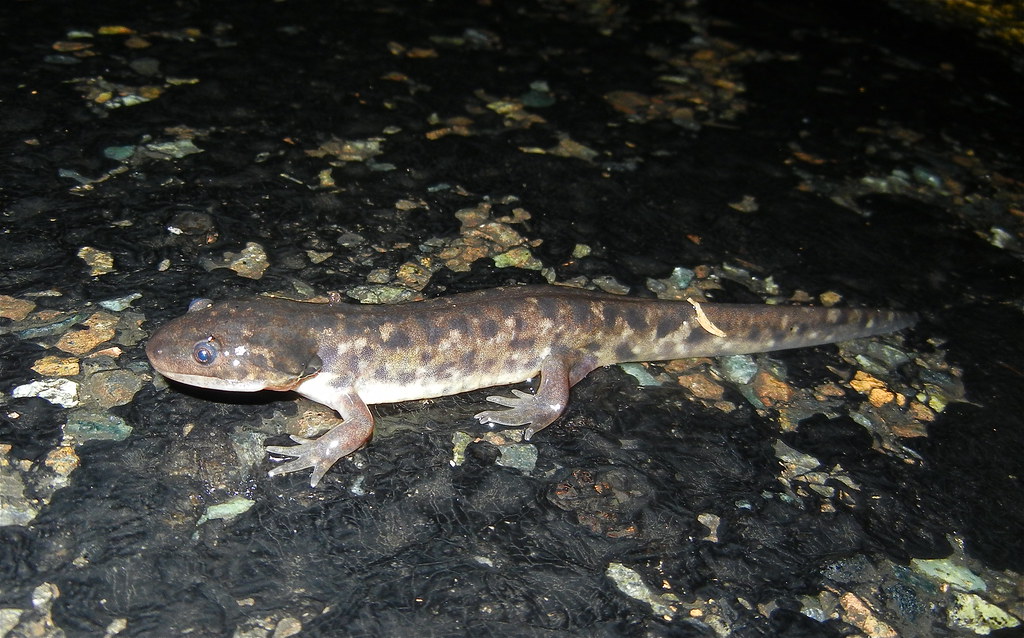 Not a great photo, but my first Tiger Salamander...one of three juveniles found that night road cruising.
Top

First Northern Red Salamander this year. One of my favorites! 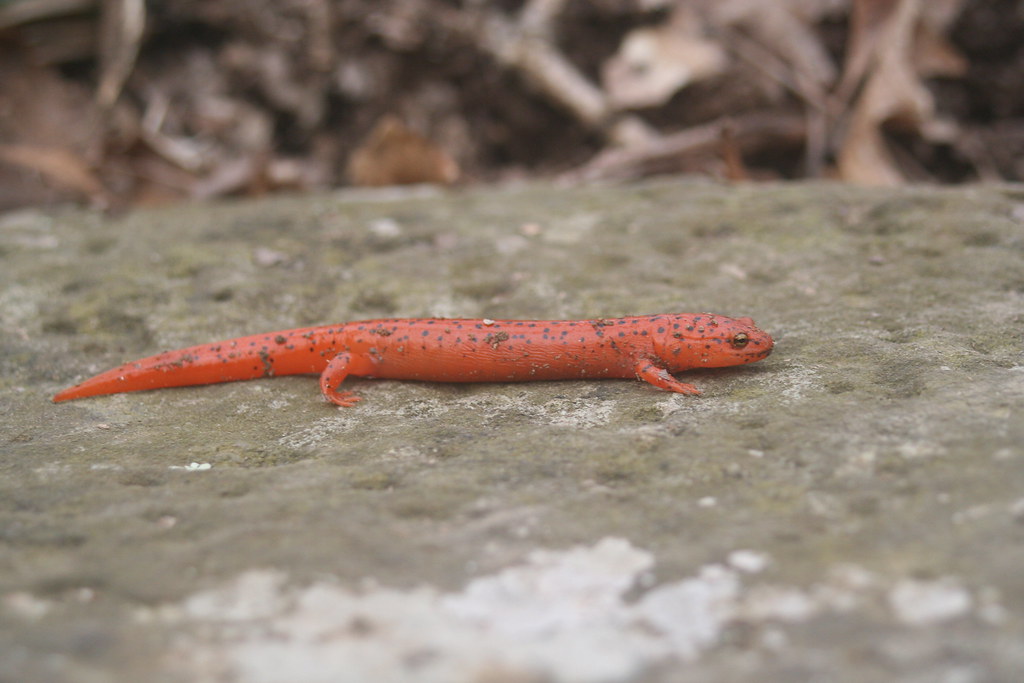 My friend is doing a photography project on Appalachian Salamanders. I took him out one day to see what we could find (He really needs help 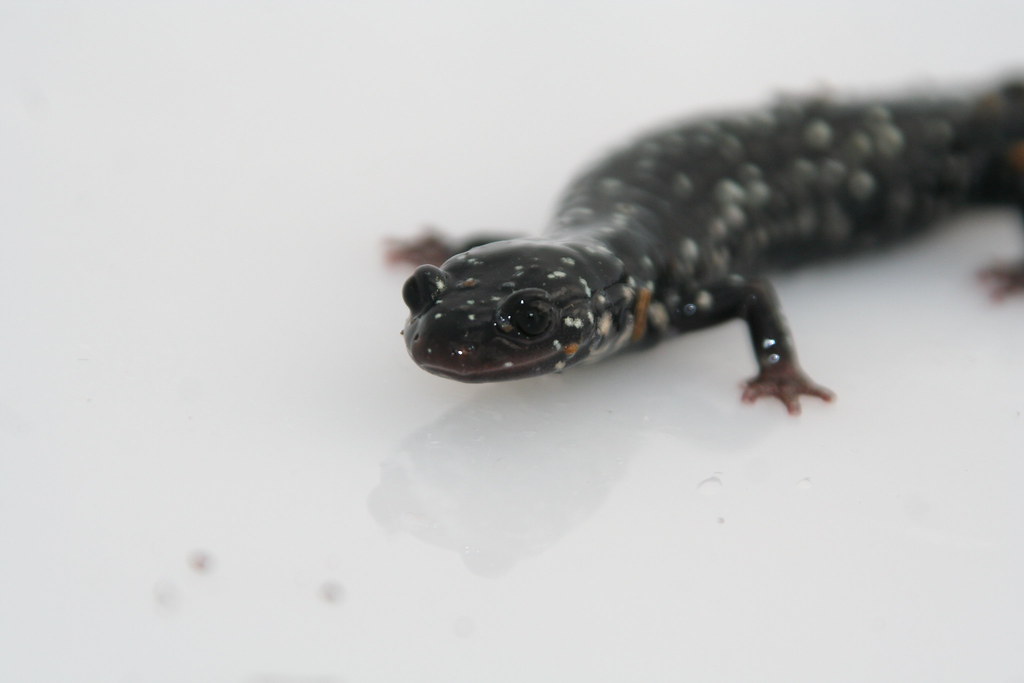 I can finally say that I have seen a Wehrle's Salamander for certain now. Again, not sure if I had seen them when real young or not. I saw a good many this year and unfortunately this is the best pic I managed to get 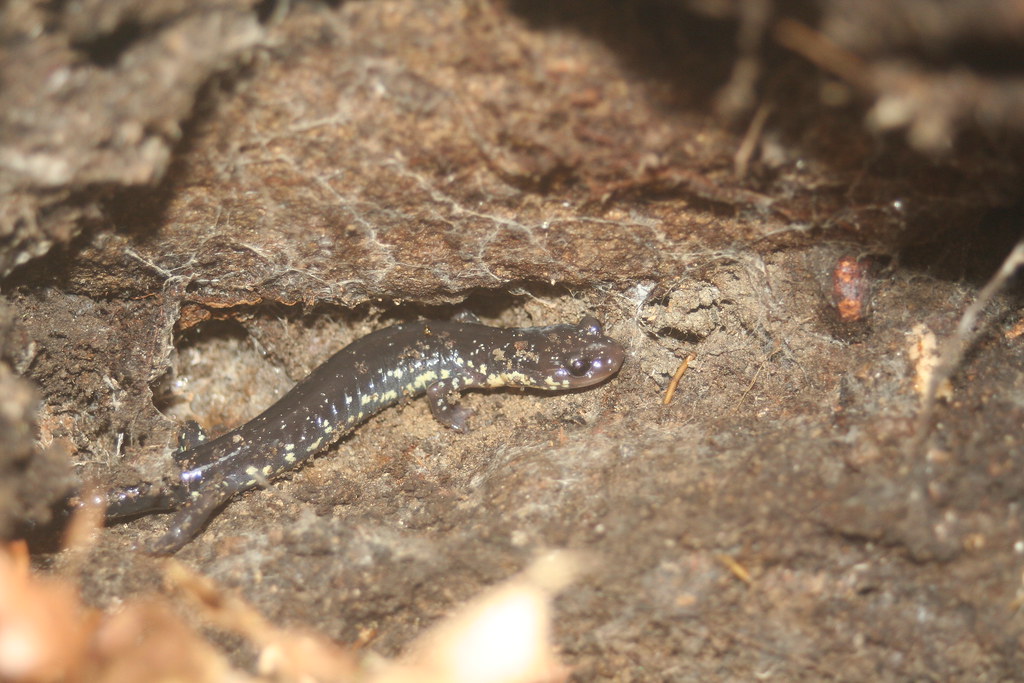