That's why I miss my 11" Scolopendra dehanni. She was a real beauty

LOL, that pic doesn't surprise me one bit. Well, no.. it does. I am surprised the pede didn't kill the snake before being consumed.
Top

She was only 9.5" here (below). This was one of two times I was stupid enough to handle her.

RIP un-named invertebrate of mine...
Top

Man, Travis.....that's nightmare material right there. I love snakes, dig spiders, don't mind scorps, but if you want to successfully interrogate me, just get yourself a Scelopendra. I'll tell you stuff I don't even know.
Top

Interesting article Bryan, thnx / its amazing how many of our sw ophidians include these revolting beasts in their diet, i'm thinking 4 or 5 do anyway.
As far as homonids holding them ... i never thought i'd see this ... I recently read a paper that stated that centipedes made up a decent proportion (I forget how much) of the diet of western massasaugas and desert massasaugas. I can't remember the details, but I was surprised to learn about it. There aren't alot of critters out there that give me the heebie jeebies but (large) centipedes are one of them, the others mostly being various parasites

I've heard some real horror stories about Scelopendra. I probably wouldn't sleep on the ground in their habitat.
Top

I used to get creeped out by them whenever we'd find one on the road at night. I've had them advance on me with the anterior third of their body off the ground.....if they aren't aggressive, they sure had me fooled. I actually collected one and brought it home, thinking that if I had it around, I'd get used to it and stop being creeped out. Didn't work that way and it went back to the wild a couple weeks later.

It was the last thing I expected to see out there but as soon as I heard it I had a pretty good idea what I was hearing. I'll be very happy if I never see another one on my property.

I've read that they pack a pretty good wallop if they manage to get those fangs into you. Anyone here ever been the recipient of a Scelopendra envenomation? Hell, the fangs alone would have to hurt pretty bad.
Top

Scolpendrids are responsible for 'some' deaths. You don't really have to worry about dying though as that is not very likely to happen. I have read it is an extremely painful experience , but this this varries by species. The Giant Asian species are said to the worst.
Top

TravisK wrote:Scolpendrids are responsible for 'some' deaths. You don't really have to worry about dying though as that is not very likely to happen. I have read it is an extremely painful experience , but this this varries by species. The Giant Asian species are said to the worst.

Everyone has always told me the bites are excruciating from Central America to South America to Asia. When I was working in Borneo I'd frequently see them during nighthikes, and they usually weren't on the ground either. They seemed to like to crawl up on dead tree trunks, or I'd see them on branches. I don't mind them so much when they're in the jungle and I can see them as long as I dont have to touch them, but I was informed that most bites happen at night when a person is sleeping and a centipede wanders by in search of food. Not long after that I discovered a giant centipede munching on a gecko in the rafters of our kitchen building ~20 feet away from where I slept... I wish they stayed put at ground level rather than climbing all about. A little disconcerting, but not much I could do about it so I put it out of my mind and hoped for the best.

Not long after I was bushwhacking through some dense vegetation in order to reach one of our sites. I had just plowed through a tangle of lianas where alot of leaf litter had been trapped and I felt something moving on my neck, we dealt with terrestrial leeches constantly so I assumed it was another one of those and plucked it off my neck. Turns out it was a centipede, mind you not a big one only 2.5 inches or so, I dont know if it was a juvenile big species or a different species all together... but let me tell you it freaked me out. No bites though.

And since I talked about them, heres one of the Bornean Giant centipedes. 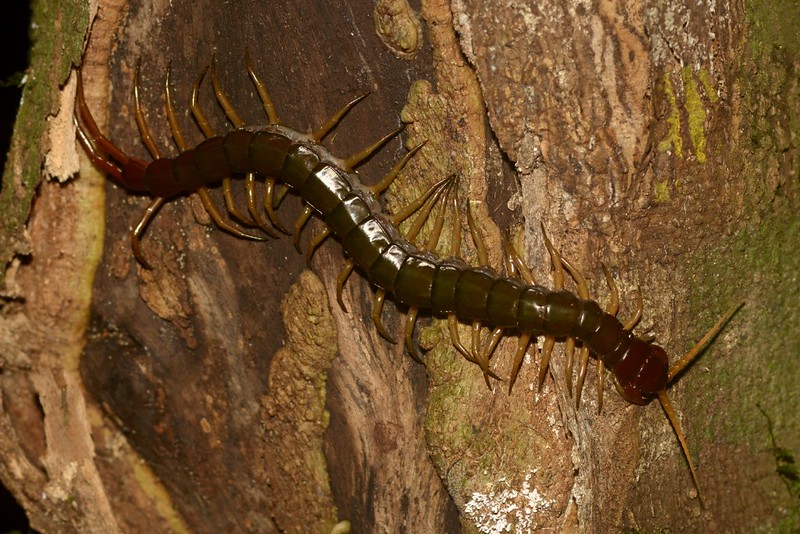 Not sure of the species, might actually be Scolopendra dehaani same as the one Travis posted.
Top

I always loved the below video clip. Also I incorrectly named the species, it should have read Scolopendra subspinipes dehanni

^^^^ Nice! Haha, I'll bet you just made Mark Brown's day - he'll probably have nightmares when he sees this

I'd pick up a tarantula, but not a pede

Hey, as long as the damn things aren't in my garage, I can sleep at night.

Actually, S. heros must be pretty darn common in Texas, at least. Not only did I see the one in my garage, but I was standing in front of my folks' house in north Austin one evening a few years ago and watched a six-inch specimen crawl out of a crack in the driveway. We regularly see them on rock cuts out in west Texas and used to see quite a few on the roads in south Texas, back when you could safely traverse the roads in south Texas.
Top

Trying to pick those things up off the road with forceps in the dark is pretty dicey.
Top
Post Reply
15 posts • Page 1 of 1