For some reason this species has eluded me despite my "improving" herping skills.
Luckily for me I was able to round up some friends and convince them to do some herping during our break between classes. About 2000 feet up in elevation later we found it, a really mellow dark phase helleri.

Luckily for us it was on the crawls and neatly tucked into a crack in the wall, where I presume its' den is located.
And without further ado here is my favorite find of the year ( I think it is a she btw) 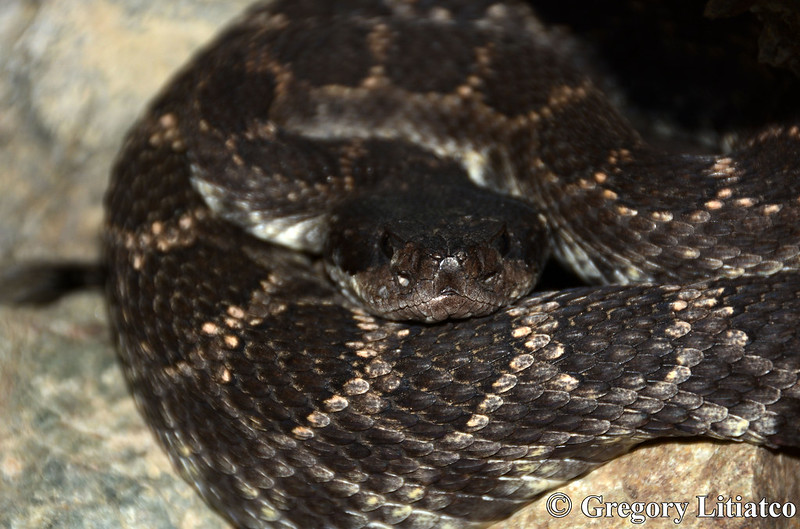 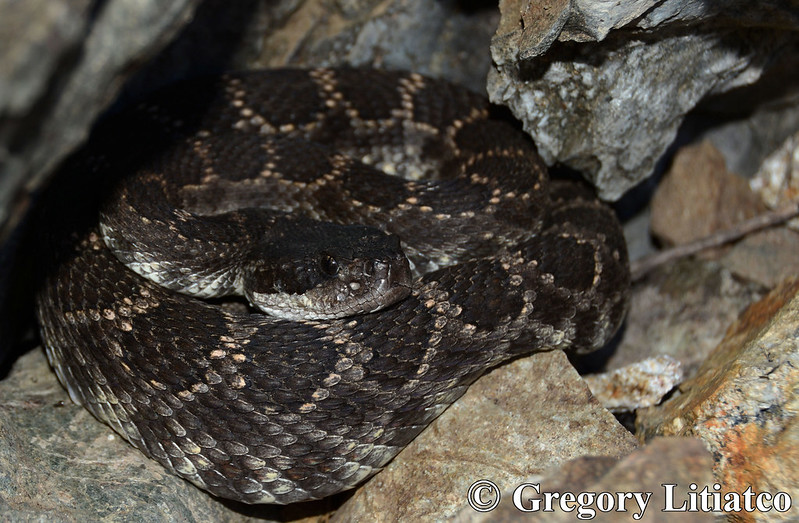 FIN (everyone has fishing licences) 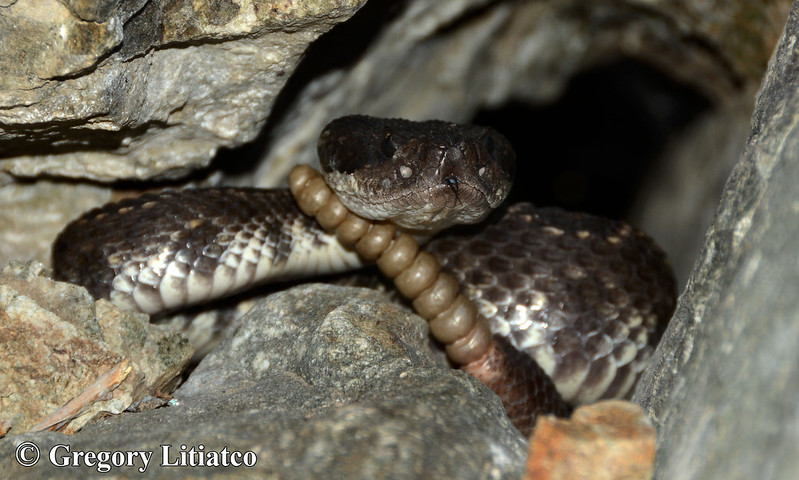 Eventually we left to go play in the woods...when we returned to the spot later, the rattler was spotted again but this time she was not photogenic and retreated into her nearby hole.

With our mini herping section over I felt that we needed to test our luck in the desert later, which is exactly what we did.
Our arrival at the desert was met with temps almost 110 degrees! Everyone was complaining about the heat but with my happy go lucky attitude and extra melanin I felt dandy.
10 minutes later I was able to flip a shovelnose and walk one sidewinder.
This photo encounter would have been perfect if it were not for the damn cattails that ruin the vibe. 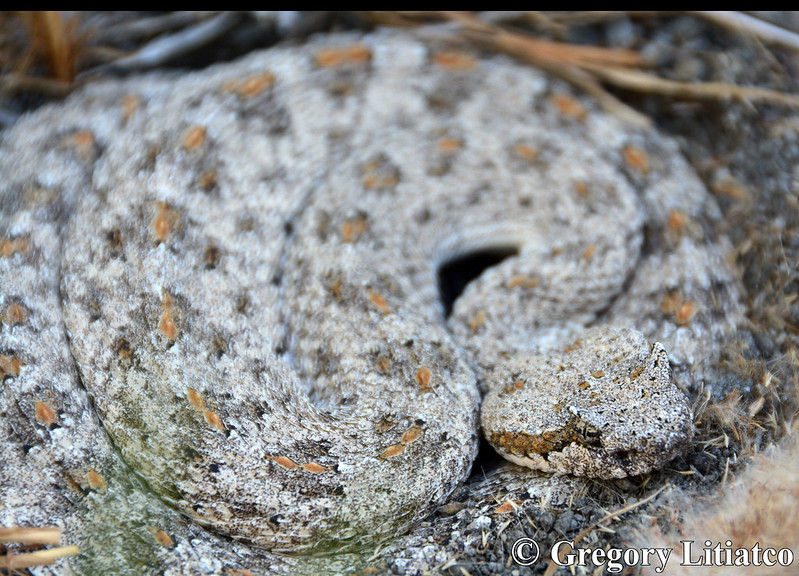 Now here was the saddest part of our adventure, while cruising by some houses I spotted a large king. Seeing how our rules are (whoever reaches the snake first gets all the glory), all of us, including the driver scrambled out as were tried tripping and pushing each other out of the way. Well I made it first, being a gentlemen and all that, and to my horror I saw a dying king with a longnose sticking out of it.

So it turns out the longnose was DOR, and the kingsnake that ate it became a DOR itself. 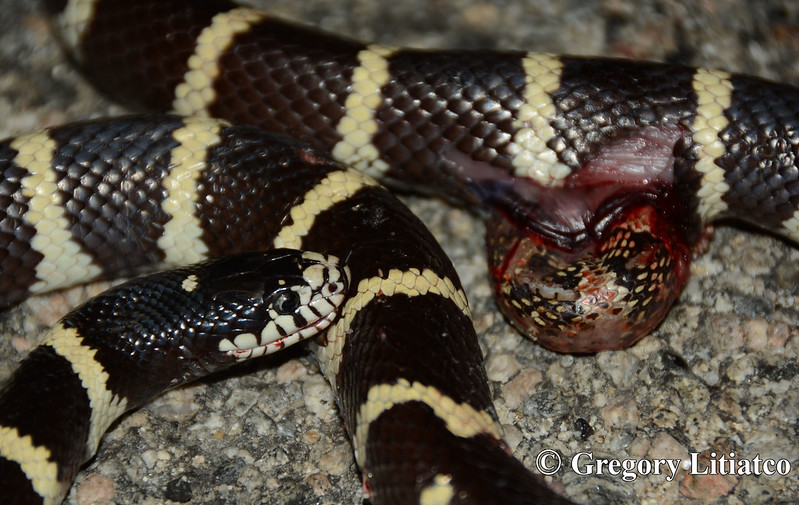 Finally in conclusion we find out last live snake, a rosy boa. Which was cool as it was my first for this locality as well as my first road cruised rosy (still not as cool as the helleri). 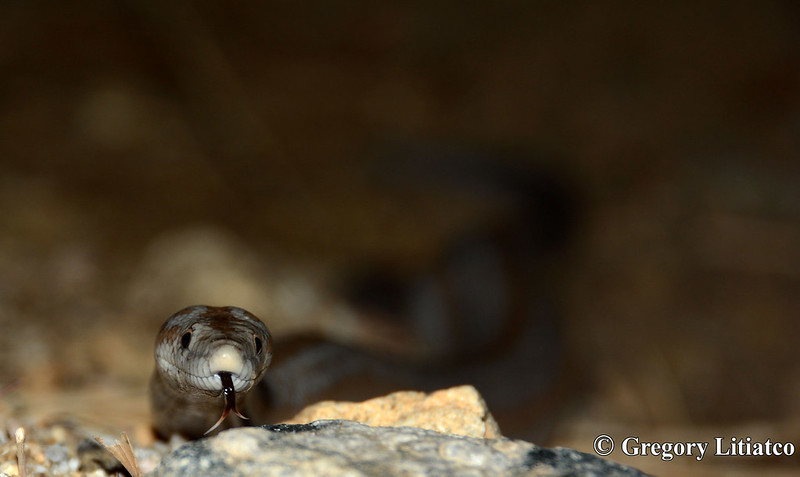 FIN (everyone had their fishing licence)

Great pictures and great finds!
Really sorry about the king though, it hits you right in the heart. 2 lives lost and no benefit for either one.

Great finds! Sad about the King of course, but interesting observation. And I will risk the ire of all, but give me a crote over the Three-lined Rosy slug any day, LOL! Keep it up, man!

I've seen like 30 helli this year, and one boa... so you can guess what I'd prefer to see next...lol Flipping a shovelnose is an uncommon event. glad you got what you were looking for, and top notch pics...

Hard to believe you didn't find a live helleri this year until recently, especially considering all your other great finds (i.e. red diamond rattlers in combat!). Now you'll probably see one everywhere you go.

Do you have any full-body photos of that nice rosy boa?

Hope to see you in SD sometime soon....

give me a crote over the Three-lined Rosy slug any day, LOL

Greg: Excellent in situ pics of the helleri, too. The new camera really makes a huge difference, doesn't it

But: No pics of the Shovel Nose? Did it escape down a burrow before you could get shots? By the looks and sounds of it, you weren't at our usual spot, were you?

SlitheringHuman- Yeah it was heart breaking! I probably would have won an Oscar if someone recorded my reaction to seeing the dying king.

Still it was very interesting to see that longnose, I wonder what other finds one might see in DOR snakes.

Phillodactylus- Thanks man! Nice to know I am not alone for team helleri, or crotes for that matter. Helleri is actually my favorite snake, I have no particular reason for this decision, it just feels right.

hellihooks- I would love to have that ratio of boas to helleri! So far it is 8 to 1 ratio, in favor of the boas somehow...
If you ever want to do another 18 mile trek for rosies let me know. Hopefully the 18 miles include your trip back, so I can just wait near the beginning

SurfinHerp- Hope to see you in SD too! Send me a message when you want to go. Finials end this week.
Those red diamonds were awesome! Speaking of red diamonds I swear those are equivalent to everyone's Helleri. I can't escape them!
BTW I forgot to mention that I found a ruber before the king. Shame on me.

RobertH- Actually I took a pic, a really bad one but I will post it. The reason I didn't bother trying to take a good photo was because it was 109 degrees. With those temps I didn't want to overheat the little guy (which actually was the biggest one I have ever seen in our spot). So while I was in the general area of out spot, it was still a bit off from where you typically go. It was by a drainage run off which probably explained why the sidewinder was out at those fatal temps...and the freaken cat tails!
This camera makes all the difference, no more macro shots of crotes with my point and shoot! That last part was a joke

Because of this new camera I actually attempt to take pictures of birds now! With my old camera the time needed to take this shot would have been wasted while waiting for it to turn on.
"it's a bird, it's a plane...no, a chuck in serious pain" 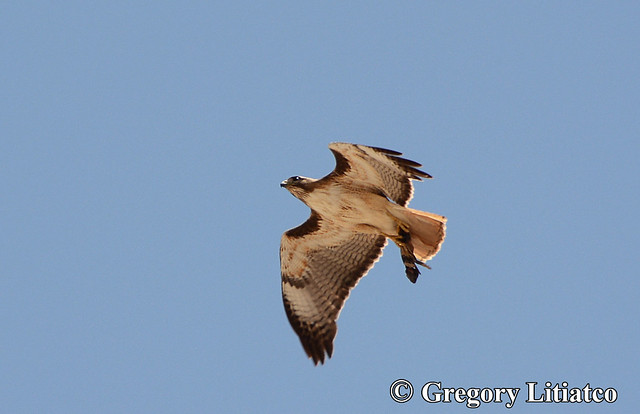 The shovel-nose being abducted into the air.

The ruber I forgot to mention.

And lastly the nice rosy boa 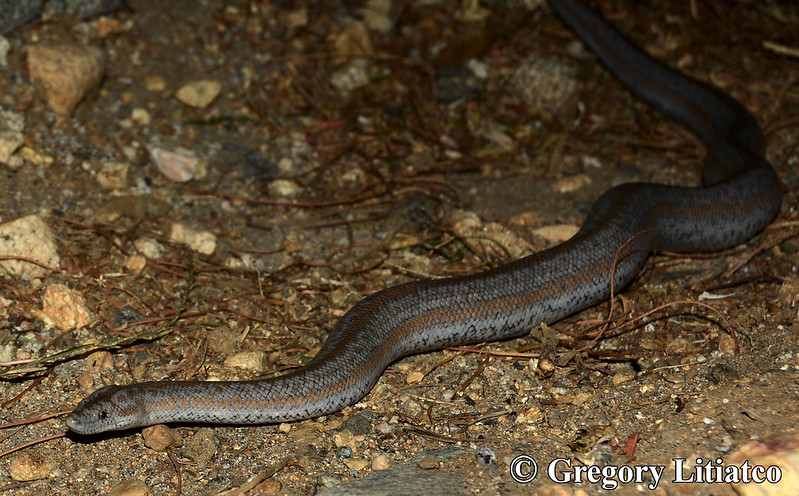 gopher wrote:
hellihooks- I would love to have that ratio of boas to helleri! So far it is 8 to 1 ratio, in favor of the boas somehow...
If you ever want to do another 18 mile trek for rosies let me know. Hopefully the 18 miles include your trip back, so I can just wait near the beginning

sounds good...doesn't take 2 people to walk one rd...and while waiting at the bottom, I have 1000 acres of prime helli hab you can cruise on an ATV, and probably see several helleri...

Cool, thanks for the rest of the story and additional pics, including the Shovel Nose. I even like the Rosy shot, which means you must be getting really good with that camera of yours, as I rarely find Rosys interesting looking, especially when road cruised and at night.

Now I am curious to find out where that drainage ditch is, cat tails and all.

BTW Flipping shovelnose is easy and a fun snake to target..

hellihooks- Sounds great, I also need to head out with you to find a particular herp that resides there *croak*

Next time we go out I will show you, it actually was the first place I stumbled upon when scouting out our area last year.

Fundad- This was my first shovelnose flip during the day. On multiple occasions I have flipped them in the night. What is truly "easy" for me is walking them. My current record for walked shovelnose in one night is 14