I was down along the Texas coast over the weekend and found a bunch of DOR Gulf Coast Ribbonsnakes (T. proximus orarius). Certainly not a big deal as they are among the most common snakes on the Texas coast.

I saw a few live ones scamper across the road as well, but mostly I saw DORs. After about 10 DORs I happened to drive by two of them right next to each other on the dirt road. I decided I would photograph them and take data when I returned that same way in about 15 minutes.

When I came back, they were still there so I stopped and photographed the first one -

and thought, "the other one is effectively at the exact same location. I don't need to photograph it" But then I changed my mind and walked over to it. I looked down and realized I had almost missed a great find - an Eastern Gartersnake (Thamnophis sirtalis)! 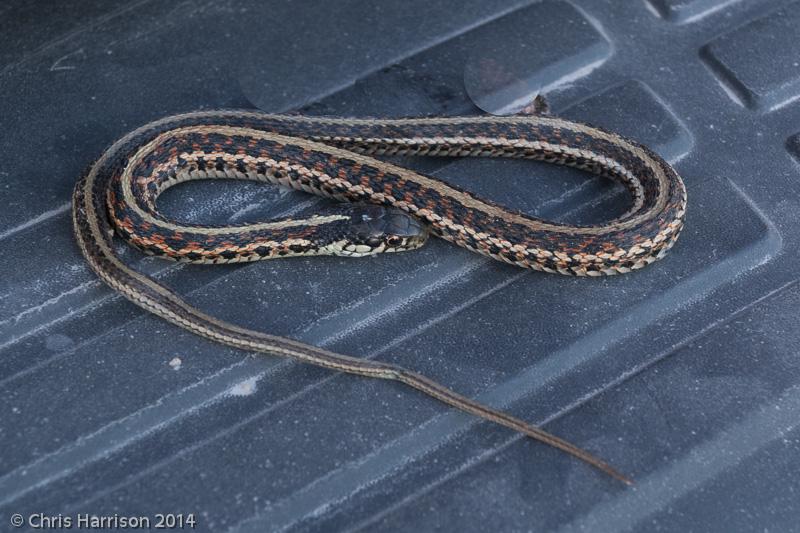 I know Thamnophis sirtalis is anything but a big deal over most of its range, but on the Texas coast it is one of the rarer snakes. In 30+ years birding and herping along the Texas coast I have found a grand total of ......three!

I also photographed another snake people are surprised to find on the upper TX coast. 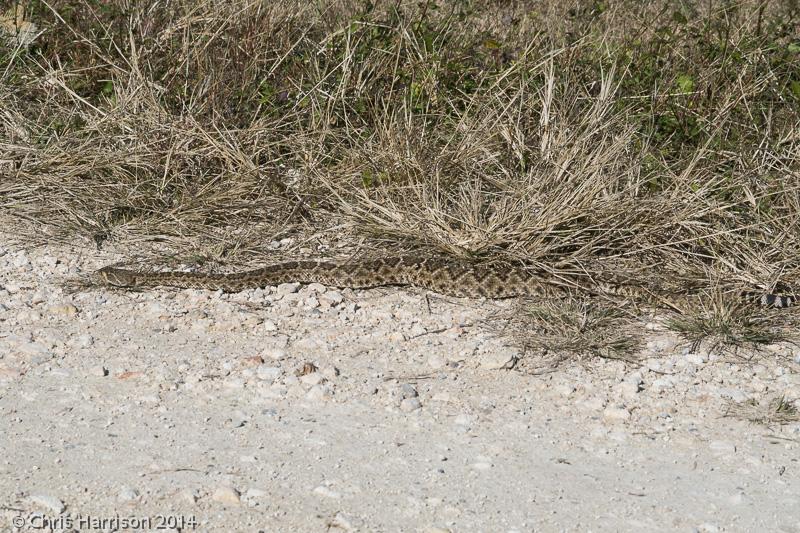 Not bad to go out herping on November 29th and find some live snakes out!

Pseudacris fouquettei are calling here as well which means spring is right around the corner!

But that got me thinking about how close to the LA border atrox make it along the Texas coast. Even though there are no records for Chambers and Jefferson counties, the coastal habitat they use is there. I wouldn't be surprised at all if they occured along that "no man's land" that runs along the coast between there and Sabine Pass.

Which then leads to the next obvious question......how well have people searched the coastal dune areas of Cameron Parish, LA for them? Seems like they are almost there. Maybe no one has looked enough? It isn't the kind of habitat people herp much.
Top

I get so in the zone sometimes I get out a the car for a leaf.
Top

Cool find Chris. Always pays to check, but I doubt I'd make it more than a few miles a night on certain roads during the spring.


chrish wrote:Which then leads to the next obvious question......how well have people searched the coastal dune areas of Cameron Parish, LA for them? .

Regarding Cameron Parish, Rman, jeffro, & soopaman have taken a number of trips down to the dunes the last few seasons (not in search of atrox, however). They might be able to let you know a little more about the habitat when they see your post.

chrish wrote: Which then leads to the next obvious question......how well have people searched the coastal dune areas of Cameron Parish, LA for them? Seems like they are almost there. Maybe no one has looked enough? It isn't the kind of habitat people herp much.

Me, Armin, and soopaman were talking about about this the last time were were in Cameron Parish. The consensus seemed to have been that the habitat is there for them so it's interesting that the snakes aren't. Maybe one or more hurricanes wiped them out east of the Sabine and they just haven't had time to recolonize? Or maybe its just far enough north that coastal populations can't survive more frequent freeze events? It would be sweet if someone ended up finding a population of atrox down there, but I really doubt they are there or else some cajun would have found it and we would have heard about it by now.

Interesting post. I didn't know C. atrox was found anywhere near Louisiana. Which raises the question, are there still EDB's in LA? I think one was seen in Washington Parish 20 or so years ago.
Top

Apparently they did/do not make it across Galveston Bay. I suspect they might be present somewhere like Beach City or the west end of Bolivar, but that general area has been pretty well collected. There seems to be a change in soils (sands to clay) once you get west of Galveston Bay, and they dunes in the extreme eastern portion of the Texas coast are very small or absent. I think the habitat towards Texas Point is marginal at best. It's also likely that they would have been recorded by staff at Anahuac, McFaddin, or Texas Point NWRs.

The sandy ridge that makes up Smith Point seems like it could have them as there are records of other sandy soil, upland snakes there (H. nasicus, Liochlorophis), but that area/road has been herped a ton.

Summation: it probably just gets too wet that far east.

That garter snake is a spectacular find. Thamnopis sirtalis was the topic of my dissertation, but I was not able to cover the Texas coast populations. They are not assignable to current subspecies, and there is no connection between them and T. s. annectens or T. s. sirtalis. Yours matches the one in Tennant's book. I hope you pickled it!

Chris W. and Jeff-ro and John

The Cameron coast has been extensively surveyed, especially by birders. But herpetologists have combed the cheniers as well, doing sea turtle stranding work or just flipping boards on the dunes and woods. There are no rattlesnake records, and I believe with that effort they would have been encountered, at least historically.

Eastern Diamondback photo vouchers from Washington Parish now include one from 2008 and one from 2012.

Can you expand on the connection statement? Do you think they got to the Texas Coast/Columbia bottomland from the north like Liochlorophis/Spermophilus? From the East via T. sirtalis sirtalis?
i'm a big Thamnophis fan and the Texas sirtalis take up a lot of my time/interest!

Presumably the isolated gulf coast populations of green snakes, 13-lined ground squirrels, and ring-necked snakes are derived from populations to the north. I say that because there are no populations nearby in the other directions. I've never seen those species depicted from the gulf populations, so I don't know whether they are identical to adjacent populations. For some reason I thought the green snakes may have been tan on the gulf, but my Texas books are at home. The reason that I said the garter snakes lacked a connection was due to their color pattern, which matches neither the nearest populations in central Louisiana, nor those to the north towards Austin.

The Texas Liochlorophis are tan....not that I have seen one. They are the rarest of East TX snakes.
Part of the problem may be that some individuals may be seen but dismissed as small racers since the racers over much of east TX are tan snakes as well.

I have serious questions about their continued persistence in East Texas. IIRC, most of the historical records were from Harris County? And Harris County "ain't what it used to be" since it holds the 4th largest city in the US. The grasslands and prairies of the western/southwestern sides of the county are reduced to a few isolated pockets now. That combined with fire ants must be largely responsible for the disappearance of these relict populations.

chrish wrote:I have serious questions about their continued persistence in East Texas. IIRC, most of the historical records were from Harris County? And Harris County "ain't what it used to be" since it holds the 4th largest city in the US. The grasslands and prairies of the western/southwestern sides of the county are reduced to a few isolated pockets now. That combined with fire ants must be largely responsible for the disappearance of these relict populations.

There is going to be an interesting historical article published in the March 2015 issue of the SWCHR Bulletin addressing this...I think the author specifically discusses specimens from the greater San Antonio area (and the unfortunate loss/dispersal of those vouchers), but he does touch on the Houston-area records to a small extent.
Top


The Texas Liochlorophis are tan....

Richard Worthington, in his 1973 paper summarizing the five known vouchered Texas Liochlorophis known at the time, listed three of them as being green. He listed W.B. Davis' second Austin County specimen (TCWC 10589) as having been possibly brown (i.e. as "Brown ?") and he described his own DOR specimen from 1964 as "light brown with a faint olive tint."

I personally saw one of John Werler's 1961 Brazoria County specimens preserved at the Houston Zoo only a few months after it had been collected. It had turned the characteristic blue color that dead Green Snakes assume; I doubt that the brown ones do this.

Additionally, Werler and Dixon (2000) describe them as being "bright green," much as they are in the rest of their range, but mentioning that adults may "occasionally" be "olive-green," while "very young" ones may be "bluish gray or olive brown." Since Werler had seen as many live Texas specimens (or more) than anyone, I tend to trust his assessment of their usual coloration (despite the fact that he failed to get his specimens into a permanent collection).

Perhaps significantly, Worthington's 1964 DOR was only 332 mm (13.1 inches) in TTL and perhaps not fully mature (although also according to Werler and Dixon [2000] the largest known Texas specimen measured only 38.1 cm, whereas elsewhere they are known to reach at least 66 cm).
Top

I'm glad you spoke up, Tom; didn't want to steal your thunder!

Thanks for that information, Tom.

I had been told by someone else that the Houston area snakes were brown and to look out for them that way.
I may have also taken that from a paper about the species as a whole that I read in the early 90s (???).

Look forward to the article!

I've seen more Deirochelys (n=3) in SE Texas than I have sirtalis (n=2). I don't disagree that sirtalis still hang on in a few spots, but in general they are almost gone from SE Texas.

In my experience with the species in SC, the trick with Deirochelys is to know their preferred habitat and how to trap them.
They prefer deep heavily vegetated swamps and they don't go into normally baited turtle traps because they primarily eat odonate larvae. If you use fyke nets or put a seine in front of your turtle trap (think drift fence) you greatly increase your chances of catching one.
Top

Certainly haven't figured out Deirochelys in Texas but I'd love to learn more, especially in Fort Bend and Brazoria Counties near me.

I'll have to respectfully disagree with your assessment that sirtalis are gone from SE Texas. True, they are probably gone from historic locales in the greater Houston area (McGregor Park, ), but I don't think they are rare in the Columbia Bottomlands, especially from Lake Jackson to Sargent. I haven't seen many (n=6) but have gotten 4 in that area in probably 30 trips or so, including one in the city limits of a small town (significant disturbance). Uncommon certainly, but probably not rare or disappearing. Fun topic to talk about.
Top
Post Reply
19 posts • Page 1 of 1