My girl wanted to spend a week in tranquility so we convinced here parents to look after our son and traveled just the two of us. Tunisia was also on the table for a while, but when travelling with a normal companion who allows you to do herping trips without her, it is wise to pick a herp-poor destination.

Terrestrial endogenous herps of Tenerife are Gallotia galloti, Gallotia intermedia, Tarentola delalandii and Chalcides viridanus. The second one is rare, the others are (very or even extremely) common. I tried my luck for a brief visit to a spot for G. intermedia but failed - the numbers of this species are known to be low and the weather was less than perfect throughout our stay (= only a couple of hours of direct sunlight during 2 of the days spent). Too bad. I did visit a cold and foggy spot for Hyla meridionalis, but other than that, I didn't bother with trying to find any of the other alien species (Pelophylax perezi, Anolis carolinensis but also Gallotia caesaris and more). 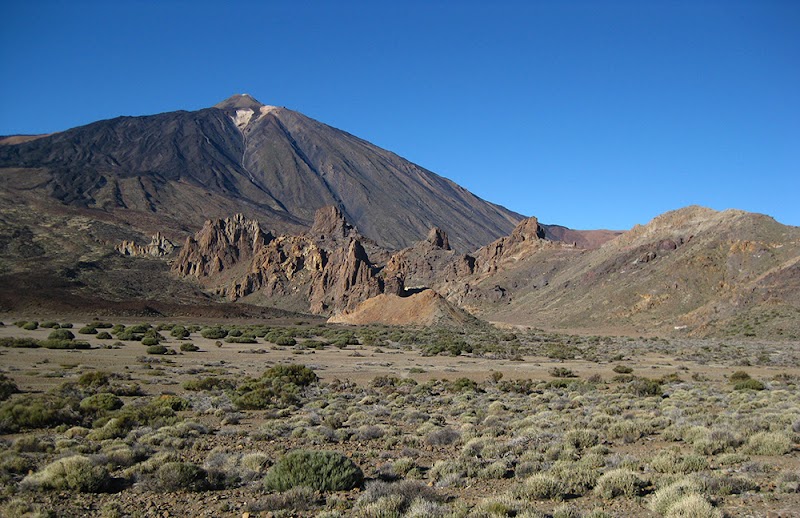 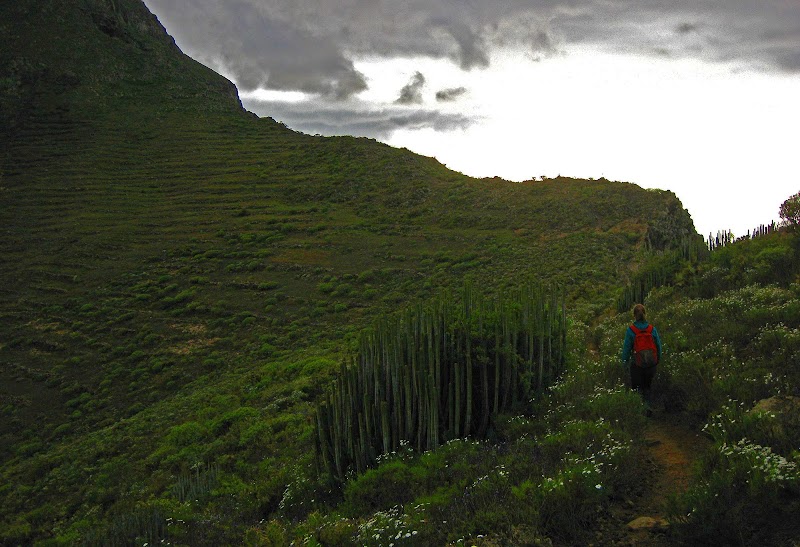 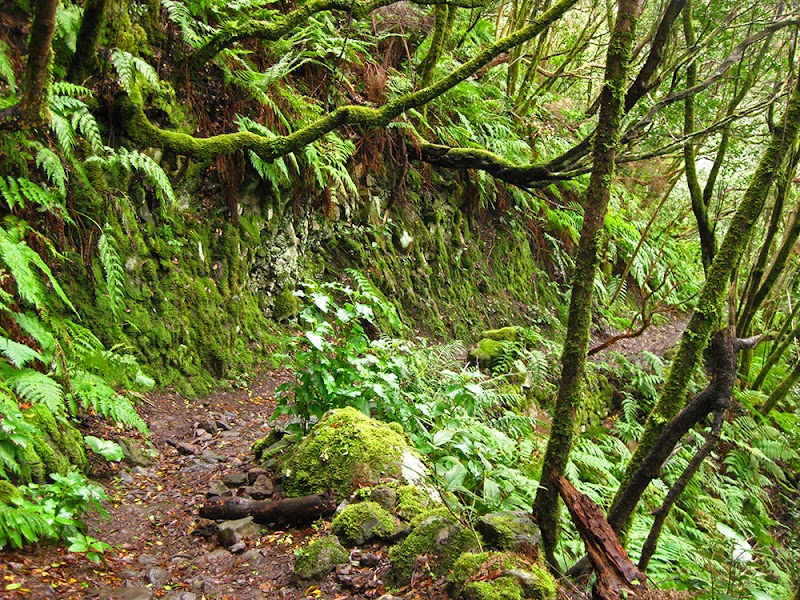 into the magnificent "laurisilva" 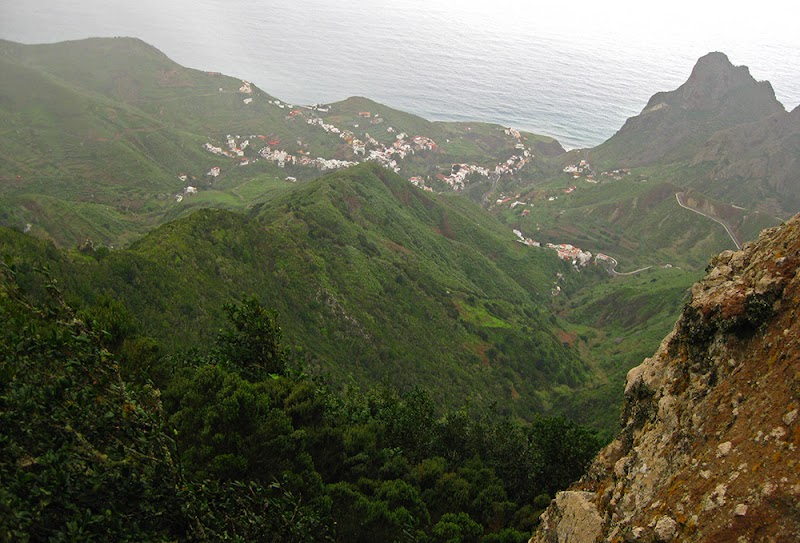 looking down on Taganana through the fog 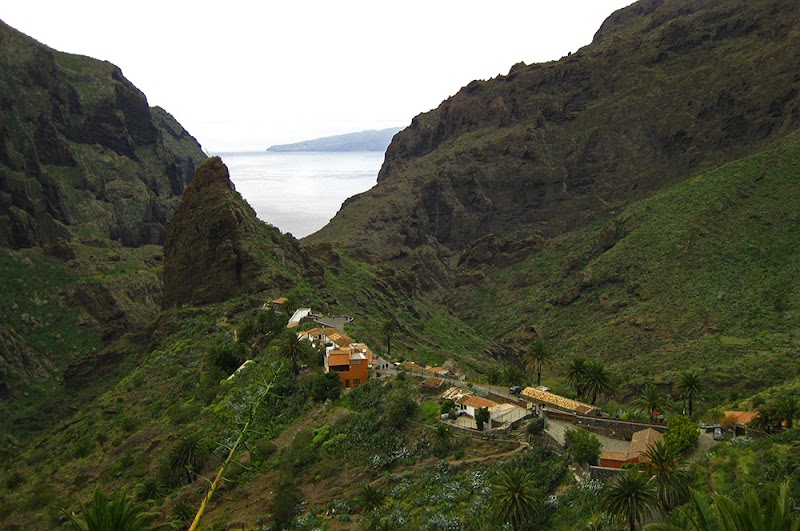 Masca - lovely place, but a massive tourist trap all the same 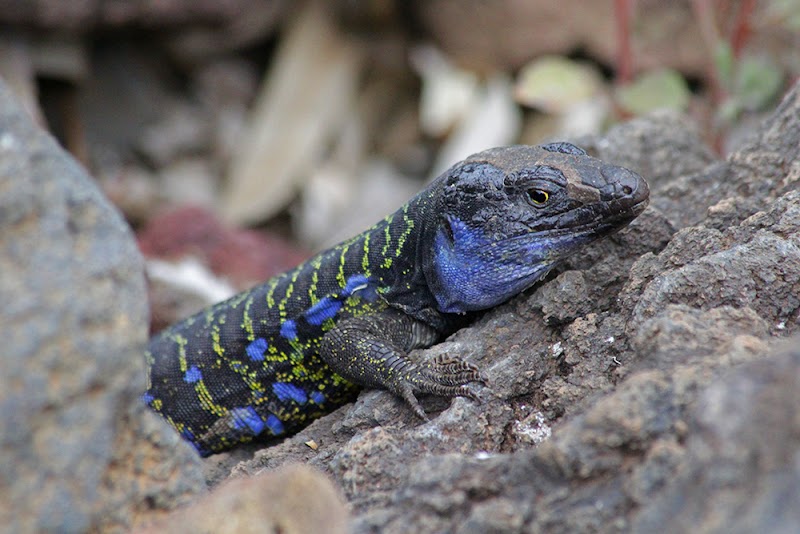 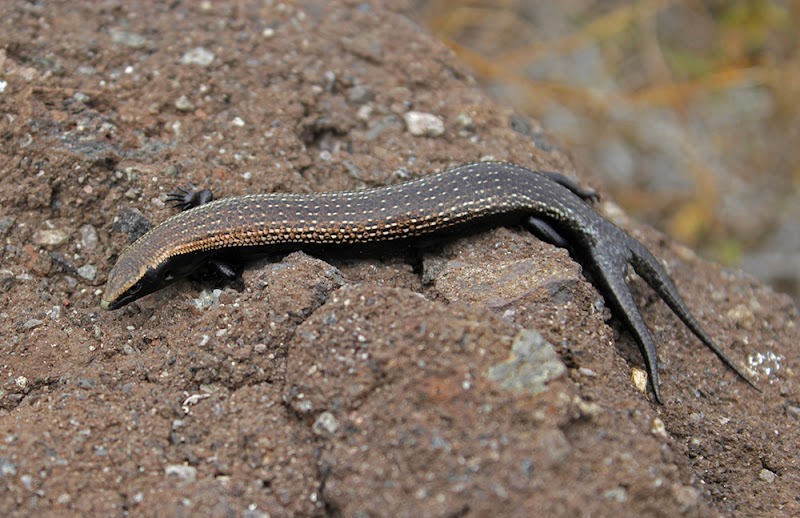 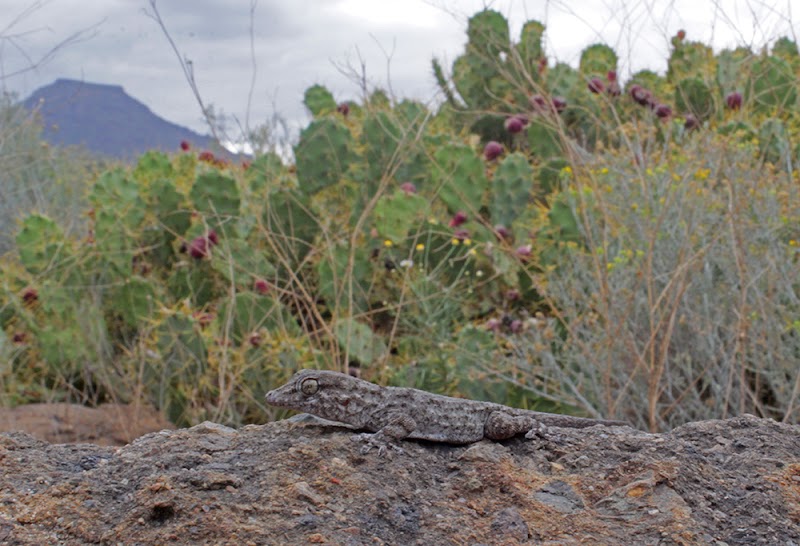 A terrible oversight by most herp enthusiasts visiting the island is that you can get up close and personal with sea turtles. Loggerhead (Caretta caretta) is supposed to be around (although all the footage I watched on Youtube referring to this species concern wrong IDs), but especially Green Turtle (Chelonia mydas) is represented by some animals which are resident to a few small bays throughout the year (maybe excluding egg-laying season). The animals are not the wildest of their species - they clearly have grown accustomed to human admiration. Nevertheless, the true highlight of this little trip was to be able to swim with these beautiful animals and even easily to be able to (I know, I know, silly and I shouldn't have...) touch them. 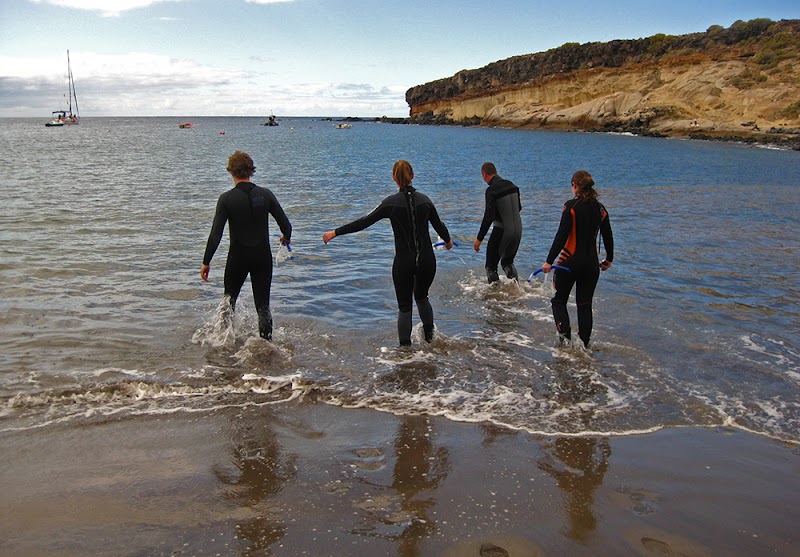 Sadly, I don't have a lot of illustration of this amazing experience - I only rented a camera for the dive I did first and which produced no turtle sightings, while 3 turtles showed up on the second, snorkeling attempt. 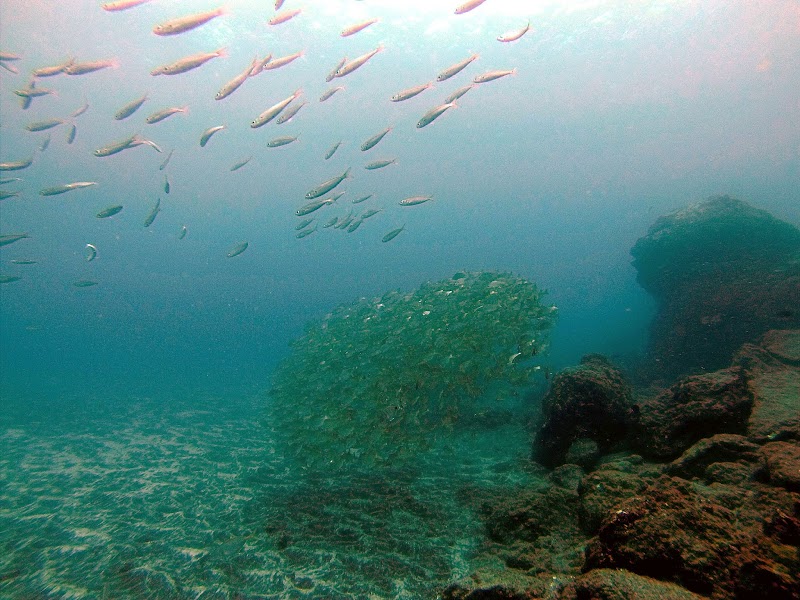 As a minimal souvenir, an Italian girl took a couple of lo-fi shots. 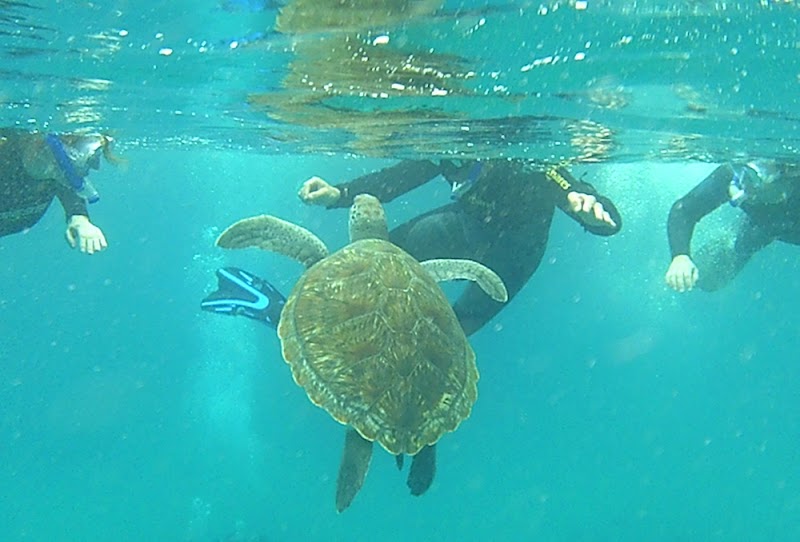 Chelonia mydas and yours truly on the right 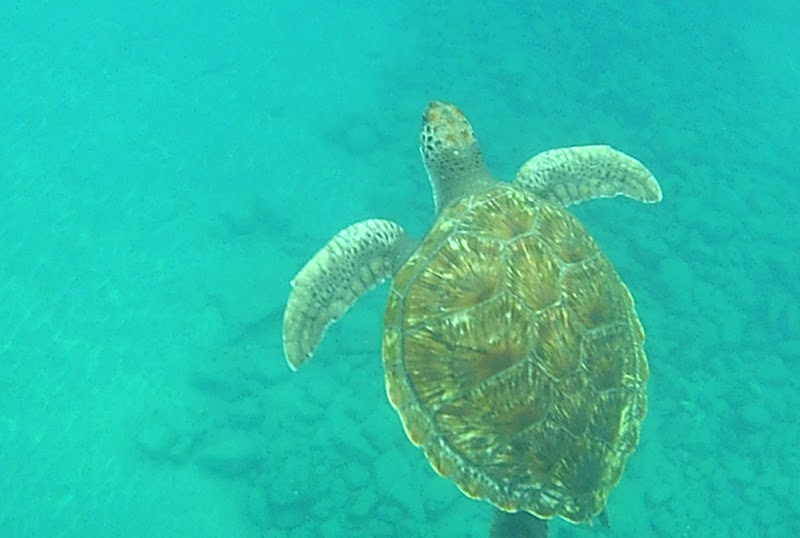 A much(!) nicer to watch illustration of the same experience at the same spot can be found on Youtube. They do get really close.

Thanks for the trip report. Not a lot of people going to the Canaries, I like the landscape shots.

The turtles are neat. I've been in the water with a number of sea turtles (greens & loggerheads) from Florida to Guam & lots of places in between, and have NEVER seen anything like that. If you're lucky usually they'll just carry on with their business, grazing or basking or whatever. While kind of keeping an eye on you, maintaining an awareness. Most frequently, in my experience they will scoot away as soon as you appear - not a blind panic, just a sedate "hmm well I'm outta here". Those guys are acting like park pinnipeds, or like reef fish habituated to human feeding. Crazy.

Do people feed those guys? I really can't conjure any other explanation for (what sure looks like) voluntary close interaction. The tamest sea turtles I've seen were in the Galapagos, and they just ignore you there.

Hey, changing subjects - are you getting a lot of input for your summer trip to the SE USA? Any big holes left?

Thanks, Jimi! Yeah, the species-poor Canary Islands are perfect for providing the partners of herpers with a warm yet still relaxing vacation

Although feeding those turtles is supposed to be illegal now and greens are supposed to be a more vegetarian species, their behavior certainly is caused by having been fed in past and present - pretending to offer them something worked as luring method. Our guide even got bitten. It's somewhat of an ambiguous feeling that you're getting from this type of "nature-culture clash" animals - in a way they are not as wild as you would expect and like, but on the other hand it's cool to be able to be so close to them. It reminded me of the dumpster raiding brown bears of Brasov, Romania (see end of my 2007 report http://www.hylawerkgroep.be/jeroen/index.php?id=39).

Concerning my American summer, I still have to make a decent overview of what I have so far and stalk some southerners, but some people, including yourself (of course!), have been more than welcoming and helpful. I also still need to learn to ID the 160+ snake species of Peninsular Malaysia for next April 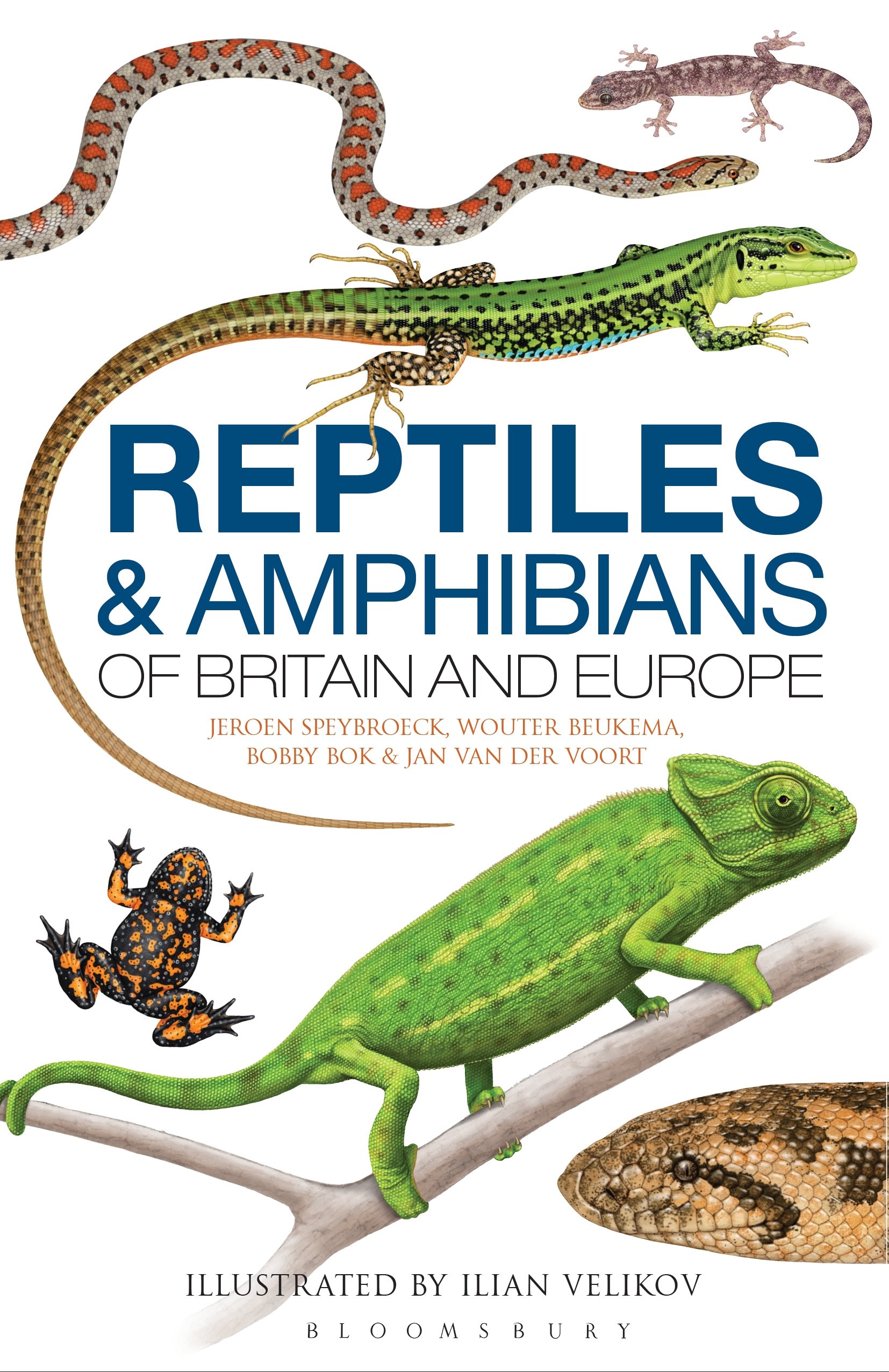 This is awesome! Thanks for sharing. I love seeing species I didn't even know existed and that habitat is sweet!
Top

Congratulations on your upcoming book release! I don't know that it will entice me to future European herping, the pickings in general being so slim, but I'll definitely get the book.

That Gallotia galloti is a fantastic lizard.