Graptemys geographica under the ice

Graptemys geographica under the ice

Earlier this week I joined my friend and local map turtle expert Greg Bulte to see what the local G. geographica doing this time of year. So using his records and memory from his previous work on this population we dug through two feet of snow and augered through a further 2 feet of ice then used a GoPro/flash light to record under the ice. Greg put together a short video and was kind enough to let me share it.

A Canadian map turtle in February is a pretty good start to the year.
Best,
Nick

Here is one from the same population in the summer. 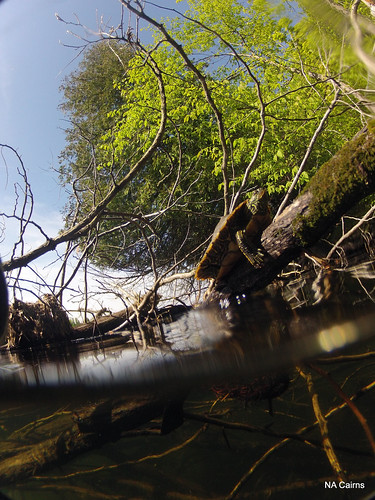 Do you folks have any idea on why they were right there, where you looked? a spring? a geographic McDonalds? a turtle psychic?

I love the perspective of that picture.
Top

I really enjoyed how the music quit as soon as the viewer went underwater. That was pretty neat.
I echo what Bill said- how did you know they were right there, where you were drilling through? Or was that just fantastic luck?

On this lake G. geographica only hibernate in a couple areas, Greg radio tracked them during his PhD and had a pretty good idea of where to drill. We lucked out on 1 of 4 holes. As for why they are in those particular areas, I am unsure, Greg is working on that. In high dissolved oxygen (DO) and low temps they are talented bimodal breathers but are sensitive to anoxic conditions. Maybe these areas have particularly high DO (perhaps a spring as you said Bill) giving them an edge over a long winter or perhaps it is the quality/proximity of spring basking sites. 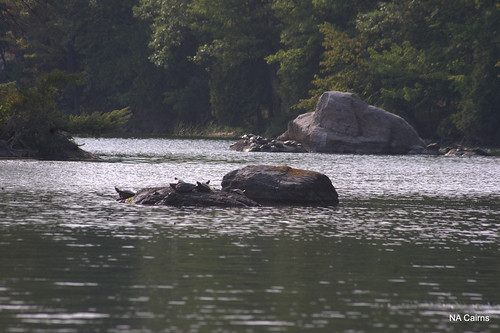 That's fascinating! I learned something new today. I had no idea turtles (at least this species) could absorb oxygen through their skin like that.
Top

Nick - Awesome post brother! Love it. I am studying Graptemys in KY as well...several species and how they live along the river. It seems to me, that where there is good DO water, there are lots of turtles reflecting lots of species; And this is year round. I had e-mailed Greg some years ago about some of my observations. And the more time I spend in the water with the turtles, the more questions I have. Thanks for sharing.

As a lay observer, I love how you rarely see a female Graptemys alone, without a male nearby, at least with G. geographica.

Maybe some of you more knowledgeable folks can comment on this. Is it opportunistic? Bonding? A convenient place to watch TV together?
Top

Thanks Mtratcliffe, it is a pretty cool biological trait that varies by species. There is a neat balance between physiological anoxia tolerance/buffering and the ability to extract O2 from the water. For North American species the extremes of this continuum are Chrysemys picta and Apalone spinifera. There is an extensive literature on the physiology involved, much of it by G. R. Ultsch and collaborators. Here is an example:
http://onlinelibrary.wiley.com/doi/10.1 ... 5/abstract

Thanks Dave, I agree the questions just keep coming. I worked on this turtle community and their interaction with commercial fisheries, so looked at the effects O2 has on in trap survival. Map turtles were very sensitive in the summer and it makes you wonder what they do in the winter. What sort of traits do hibernacula have in Kentucky? From my previous work I think the hibernation traits of Sternotherus odoratus would be particularly cool. This species did not significantly decrease it's activity when caught in a net even at 20C+. In the high DO of normoxic, cold water they could maintain a reasonable pH and ion balance so it seems the only limiting factor would be metabolic rate. Do you see these guys at your hibernation sites? I imagine they are very active.

Bill, I can confirm that I see the same thing here especially in the spring. I always assumed (but can't say I've tested this) that attendant males might have a better chance at copulation in a species with female choice being the limiting factor in mating (as opposed to a more "coercive" mating strategy used by Sternotherus). It also allows for mate guarding in a species known for clutches with multiple paternities (http://www.nrcresearchpress.com/doi/abs ... -2012-0320). A subject that would be cool to look into. I sent Greg the link to this thread and I'll let you know if he has any other thoughts.

Can't wait to get down to get Alabama next week and hopefully see some other turtles especially Graptemys and Sternotherus. 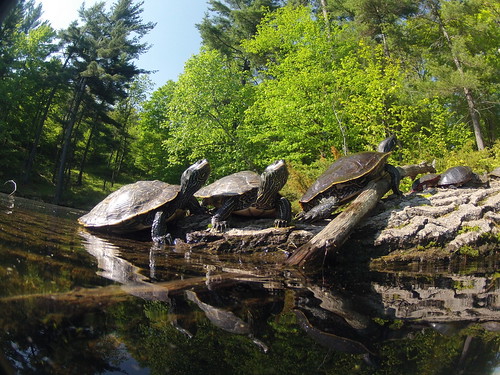 Wow! That is really cool. I've always wanted to do something like this. Thx!-Dave
Top

Really cool! What are you using for the over under shots though? Also, I can sneak up on a turtle with the best of them, but I can't imagine much success with my UW camera rig. I guess if I actually start bringing my snorkel and mask along I can stay even more stealthy... I have been planning to try and execute over/under basking turtle shots for a couple years now, as well as some UW wood turtle stuff. Just haven't had the right opportunity to lug all my gear out into the field.

Wow, very cool. As an icefisherman who sometimes gets to see under the ice with a buddy's ice cam, I've often thought we should see turtles but never do. Obviously they are not "just anywhere". I'd guess DO was the limiting factor but I'm just an ignorant fisherman.

What's with all the clam shells littering the bottom? Are those invasive Asian clams? Do they serve as a food source at anytime during the year?
Top

Thanks all for the kind words, I'll pass that on.
Jason, it is a GoPro2 with snake river underwater focus fix. I need a new lens that is a little more hydrophobic. As you can see it is falls down on the under part. Copes poorly with the heavy refraction, hard to get a subject that breaks the waters surface. It does a decent job when the subject is completly above or below.
Mike, every time I go ice fishing and someone brings one of those cameras I hope for a turtle or a mudpuppy or even a fish for that matter. I think DO is a key variable but also cooler shallow water may be preferable to minimize metabolic rates and it probably varies by species and location. Those are all invasive zebra mussels (Dreissena polymorpha) and they now serve as a major component of the diet of these turtles especially for females. Check out this paper for more:
http://mysite.science.uottawa.ca/gbloui ... bramus.pdf 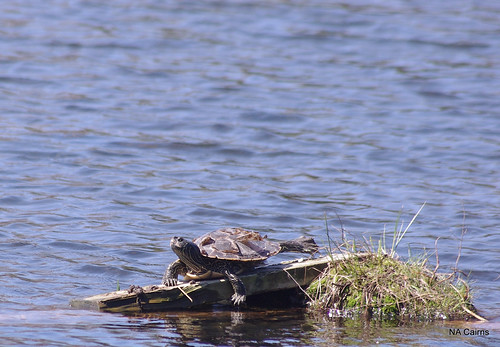 I thought this article did a good job at explaining how turtles hibernate underwater.