I'm in the early stages of planning a month-long herping trip to Australia this coming October. My three top goals are:

At this point my plans are extremely flexible. I was hoping to get some advice from the Australia-knowledgeable among you. I've been to various parts of Australia, but never in October. Some of the questions I've got are:

Which general areas have the most herp activity in October (and which part of October)? For instance, it seems like the Red Center should be good at that time of year.

Which general areas are not so good in October? For instance, I heard one person say that the NE Queensland rainforest area isn't too productive until Nov/Dec.

Which particular parks should be good at that time of year?

Which places to stay are well-located or have good herping right on the grounds?

My current super-tentative plans are along the lines of:

Fly into Sydney. Spend a few days in the Sydney area. Fly into Alice Springs. Spend a week or maybe more in the Northern Territory with time divided between the MacDonell Ranges and the Yulara/Uluru/Kata Tjuta area. Get to Adelaide (probably fly, maybe drive). Spend a week or maybe more in South Australia with time divided between spots around Adelaide, the Flinders Ranges, and the Eyre peninsula. Maybe also try to get out near Brisbane and spend at least a few days in that area (is Lamington National Park productive in October?). I'm currently not planning to visit Western Australia because I've been from Perth to Shark Bay three times so I'm less likely to find a lot of lifers there. But maybe that's a mistake?

I know this is all nearly impossibly vague, but any advice would be greatly welcome.

I will leave you with a picture of a small plastic thorny devil yearning towards a large tile thorny devil. I took this in Denham, WA, on my last unsuccessful thorny devil hunt (I did see a DOR, but that doesn't count). 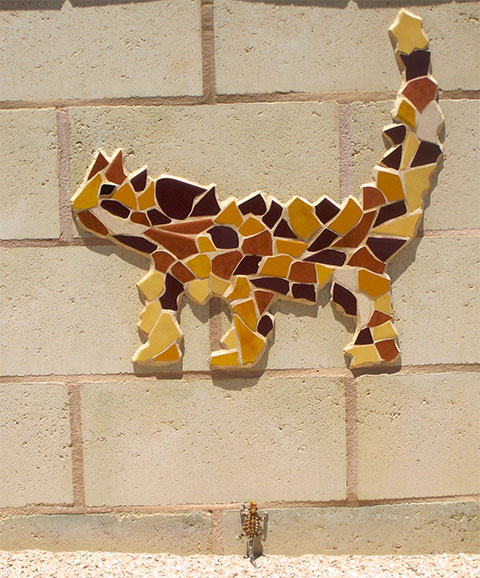 Hi John. I don't have a lot of experience actually herping these areas during the month you are here, but I would think the more northerly regions would produce some interesting things. You are welcome to visit my wife and I if and when you get to the Adelaide area. We live about 20 kms south of the city, on the Fleurieu Peninsula. I've got to tell you though, IMHO there aren't a lot of cool species here in the immediate area. We love nothing more than hiking and exploring and it would be nice to meet a forum member

. PM me once your plans are firmed up if you're interested.
Top

Thanks for the offer, John. I'll have to see how my plans work out, but if I do end up in the area it would definitely be nice to meet and go out on a hike somewhere with a local.

Did you try any herping in the area this past October, or were the weather conditions just not good enough? I like cool species as much as the next guy (hence my search for thorny devils), but I also get excited by drab little treefrogs and small brown skinks, etc.

Cool! Have a great trip, John. Do add the awesome Frilled Lizards to your list!

Thanks orionmystery. I don't think it's the right time of year for frilled lizards, and I'm not currently planning to visit the northern part of Australia where they are found, but at least I have seen one of them before. I've struck out three times looking for the thorny devils. I have seen a couple of Burton's legless lizards, and could very well see more. They are widespread across the country. A very neat lizard!

Anxious to see how this develops, because that n°1 target sure is about as great a target species as they get! Good luck.
(sorry for the meaningless contribution, though

Hurry up and go, I look forward to the report. My wife and I would like to return in the coming year or two... and a thorny devil will be high on our list
Top

I definitely want to hurry up and go, but I do have to wait until October. Darn!