I've finely got a date set the the next Demo Forest Herp Survey and it will be on Saturday May 2nd. I'll post the details as we get closer. For those planning on attending please let me know.
There are still some species that should be present, but that we haven't been able to locate yet, so our main goal will be to fill in the missing varieties.
For those who have never been on one of these trips we pretty much spend a full day out there and we do find a lot of herps.

OK, no responses yet, but I'm sure some of you out there are interested so here are the details:

We will meet up at the Soquel Demonstration State Forest Headquarterson Saturday May 2rd., at 08:30 then head in through the back entrance. Same as the last two times.
The address is: 4750 Soquel-San Jose Rd, Soquel CA 95073. Should you need to call, the phone number is (831) 475-8643 and there will probably be someone from the office to answer. I don't have cell coverage there.

To get there from the San Jose area:
Take Hwy 17 South toward Santa Cruz.
Take the Summit Rd. exit and cross over the highway.
Make a left onto Summit road and go 3.8 miles to where the Soquel-San Jose Rd. 'T's' with Summit.
Make a right onto Soquel-San Jose Rd.
Go 6.8 miles
Look for the CALFIRE sign on the left.

To get there from Santa Cruz:
Take Hwy 1 toward Monterey
Take the Porter St./Bay Ave exit.
Go left onto Porter (Porter becomes Soquel-San Jose Rd about a 1/4 mile from there)
Travel Soquel-San Jose Rd 4.2 miles and look for the CALFIRE sign on your right. (Just past Olive Springs Rd)

To get there from Monterey:
Take Hwy 1 toward Santa Cruz
Take the Porter St./Bay Ave exit.
Go right onto Porter (Porter becomes Soquel-San Jose Rd about a 1/4 mile from there)
Travel Soquel-San Jose Rd 4.2 miles and look for the CALFIRE sign on your right. (Just past Olive Springs Rd)

We will meet up at 8:30 AM and car pool in from there.
I'll have data sheets, an extra hand held GPS, some snacks and drinks, but bring a lunch, as we will be there most of the day.

PM me if you are planning on attending.

I should be there. Thanks again Lawrence
Top

Guess I missed this earlier. I should be free and would definately like to come.
-Elliot
Top

I'll be there. Thanks!

I ought to be able to make it, for a change.

Once again, being in a band has impeded by herping...

Do you think that there will be any opportunity to leave the survey early?

Zach,
Sorry but that won't work, we will be too far in by the time you would have to leave. Bummer man.

For those signed up please remember to bring a lunch as we will be out there for most of the day. As always all Cal F&W regulations apply and there will be no collection. You will also be required to sign the NAFHA Liability Waiver.

Our target species will be Western Toads, Cal Kings, and Racers, none of which have been found there. We will also be checking for Foothill Yellow-legged frog tadpoles in a different section of the main stream.

Yesterday we held another Soquel Demonstration State Forest NAFHA Spring Herp survey, this time with just 4 participants, a lot of cancellations, and competing events this weekend. Even with the small number of us we were quite successful. Here's a brief summary of the day.

Within seconds of starting Elliott flipped a small log revealing a miniature version of one of these California Slender Salamanders. I didn't get a photo of that one as I kind of figured there would be more. Turned out to be 37 more over the course of the day: 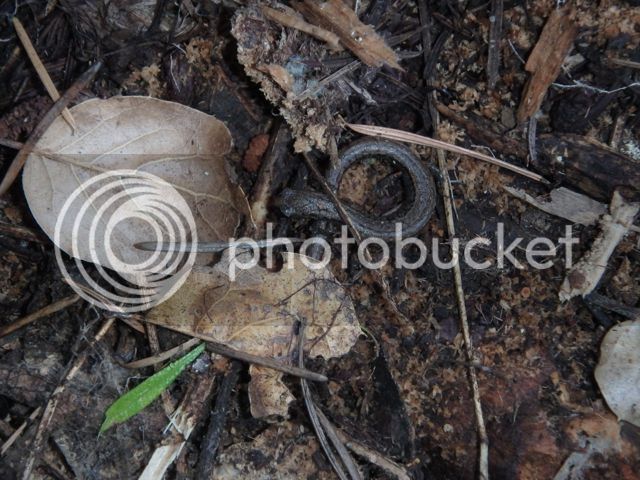 My first flip of the day turned up this little female Rubber Boa. Not long after that Elliott flipped a young male, and about 45 minutes later Mariya flipped a good sized adult female.

Notoriously difficult to photograph, but always a welcome find were Skilton;s Skinks, 13 in total.

Ringnecks were abundant as well, 8 in total with four under one board.

Two Santa Cruz Garter snakes were found. You can see for yourself Elliot's delight after being musked by this one.

The ever present San Francisco Alligator Lizard including this patternless Juvie showed up in good numbers (20).

I had to break away from the group for a bit for a vehicle shuttle and upon my return I found the group smiling from ear to ear. I thought they had found a 'Z', but they had actually found something better, at least more significant anyway. It was a small group of juvenile Foothill Yellow-legged frogs in a roadside Sulfur Spring.

Here's the spring, more like a mud hole and certainly not like any area any of us had every seen one, nor would expect to see Yellow-legged Frogs in. Very little sun exposure as well.

Later in the day we made it down to the creek where we did expect to find Yellow-legged frogs. It was a stretch where they were know to occur, but as far as I know never documented. We found 11 here, juveniles, adults and 6 egg clusters as well as many many tadpoles.

When we first came across this CA Newt we thought she was just VERY gravid, after a closer inspection, there was more to it. Just what we don't know but if you look at her tail, you can see she is actually emaciated.

Here's shot of the creek with all the Yellow-legged frogs, there weren't any right here, too shaded, but there were some nice 20+ inch Steelhead.

Some other cool finds were this ground level birds nest and this deer skeleton, which based upon the tucked away location I'm guessing a Mountain Lion kill.

Any finely here's the group photo:

Thanks to everyone involved, it was a great day.

Great day for the Soquel!

I do need to ask... how many ticks

Owen wrote:I do need to ask... how many ticks


TMTC, but just one human bite that I know of.

Looks like a great day. The eggs and tadpole photos are stunning.

Looks like a great day, Lawrence and the rest!

I am very sorry that I couldn't make the survey- I really do appreciate you taking the time to set them up.

I hope to make the upcoming ones, when my band schedule settles down (after tour)
Top

Sounds like another productive Soquel survey, albeit with only four participants. Good job with the FHYLFs.

I love the gravid Newt, not sure I have ever seen that?

Also I love the look on Elliot's face with the musk,

Nice job, all! Sounds like a very successful survey.

Good crew, too! I really wish I had been able to make it out with you all.

Nice find on the FYLF. Those are some good photos, Lawrence. The tadpole/egg shots are awesome!

Congrats on a awesome survey! Hopefully when I finally go back to spending more than a week visiting family in California I will make another one of these trips.

Sorry we missed it, but it looks as if you guys did pretty well! Ironically my dad and I went on a little hunt around our neighborhood for boas, because apparently they are in the area, but all we came up with was a skink, and a few scorpions. I'm glad you guys found some cool stuff, and we hope to make it down next time!
- Jeremy
Top

I somehow managed to miss both the survey AND this post about it. Great job, it looks like you all had quite a degree of success! Interesting about that FYLF spot.