Filling some holes around Portland

Filling some holes around Portland

Though I spend most of my Oregon time in Columbia County, I wander over to Portland a good deal and am quite intrigued by the herptofauna there. Whenever I'm around, I try to record what herps I can wherever I hadn't been before.

This year I was particularly interested in the sun-loving herps, having noted that many of them (toads, all lizard species, and all snakes other than northwestern and common garters) have rarely or never been recorded in the NAHERP database.


First, I carpooled with my dad's Boy Scout troop to herp one decent-sized park to the east. The river basin area produced ranids and long-toed salis, along with a single northwestern garter. 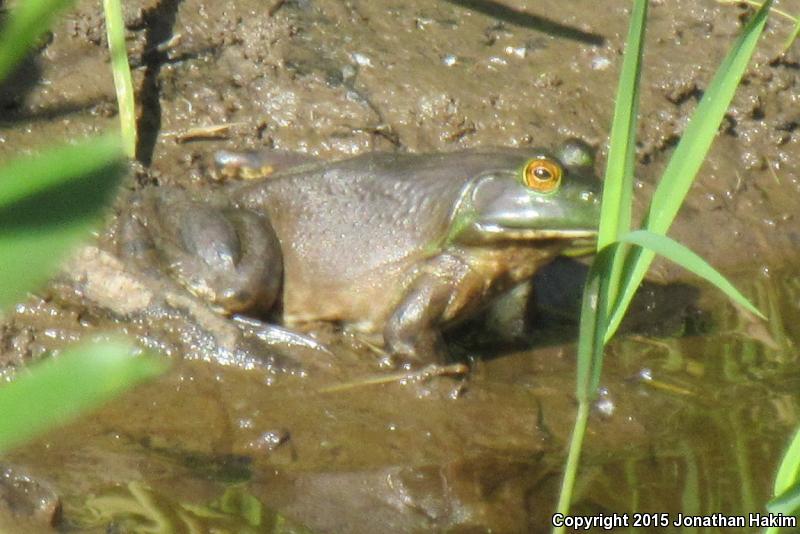 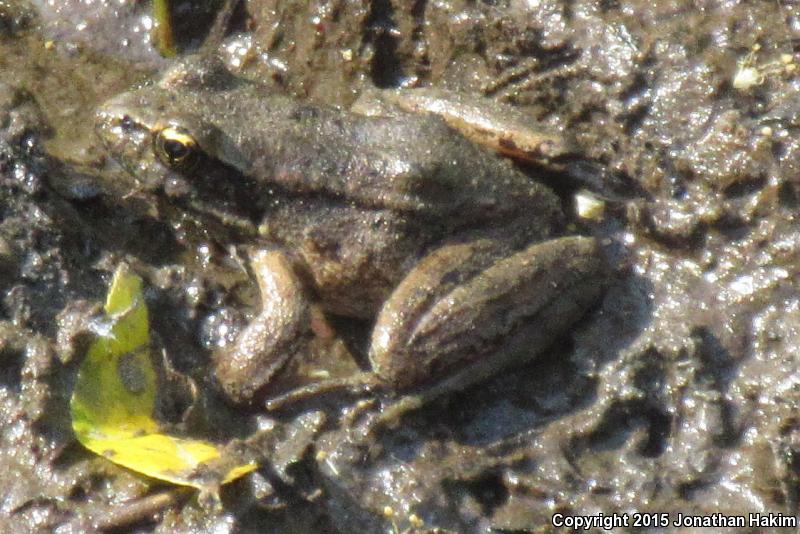 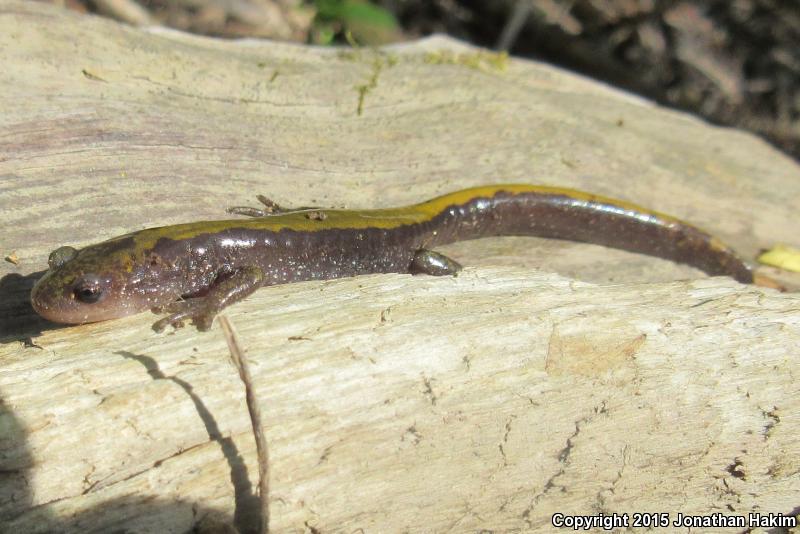 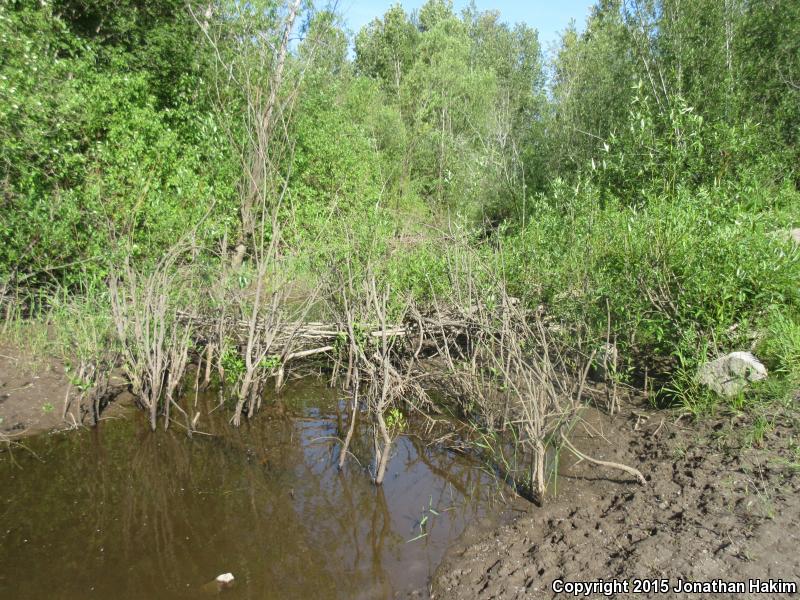 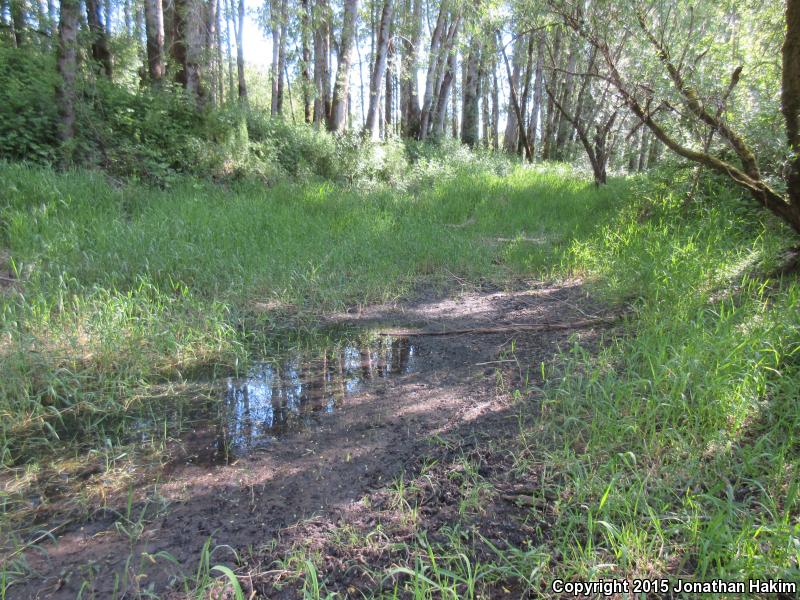 Getting up into the meadow just above the current floodzone, the snakes started coming out. 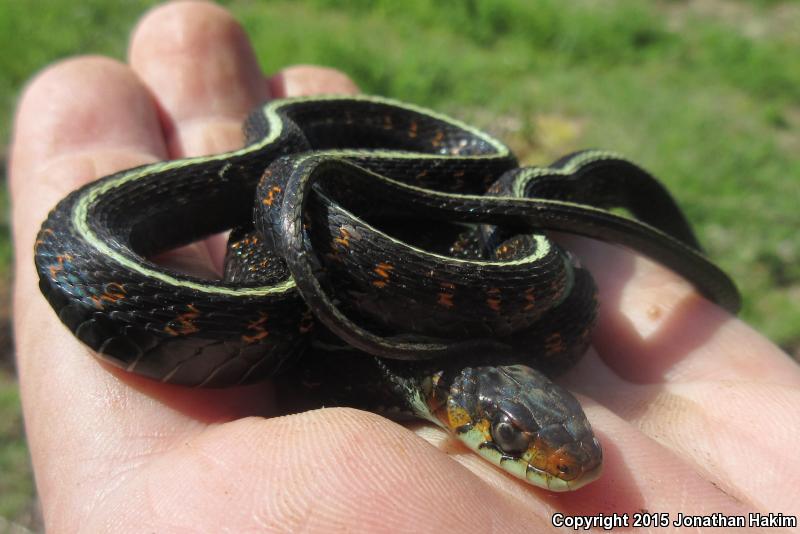 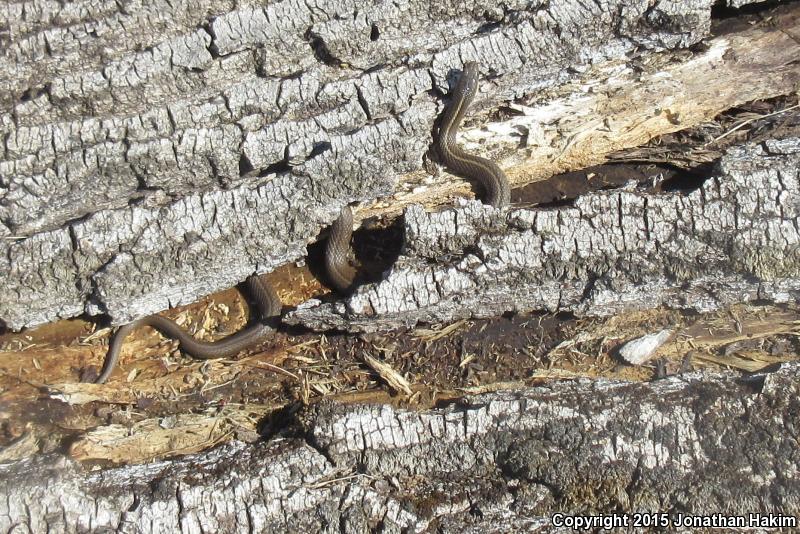 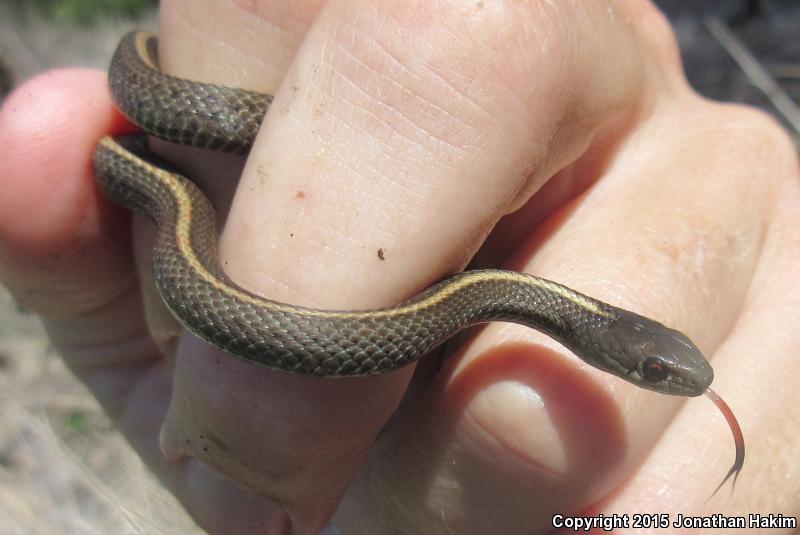 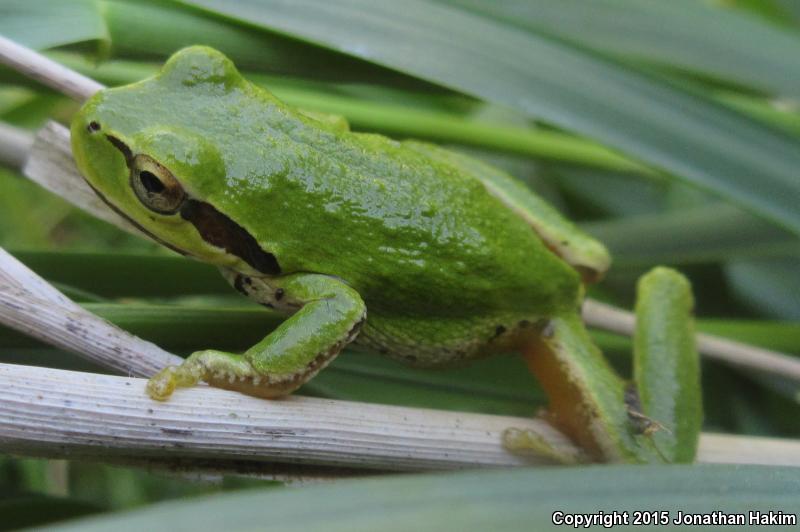 Habitat shot. I'm curious if the lack of lizards/boas/racers/etc. was just by bad luck, or was related to the historical state of the habitat as still within the river's floodplain. 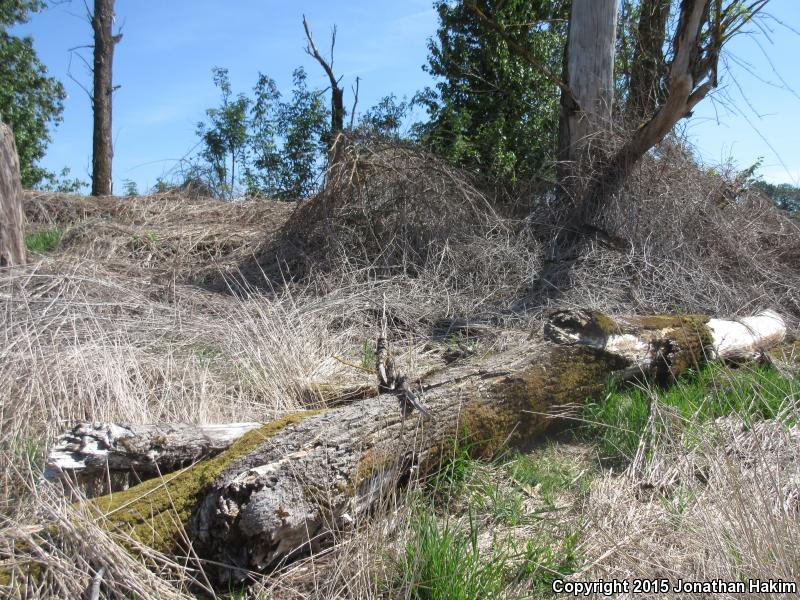 One of the ticks that I've suddenly been finding recently:

I was picked up from there by a childhood friend who I'm slowly converting into a bit of a herper. He lives in the Clackamas County portion of Portland's metro area, and was excited to try to fill in some of the many gaps in that county. We hit up a couple of ponds he had located for me, and indeed managed to get three county records for the database, of quite common species. 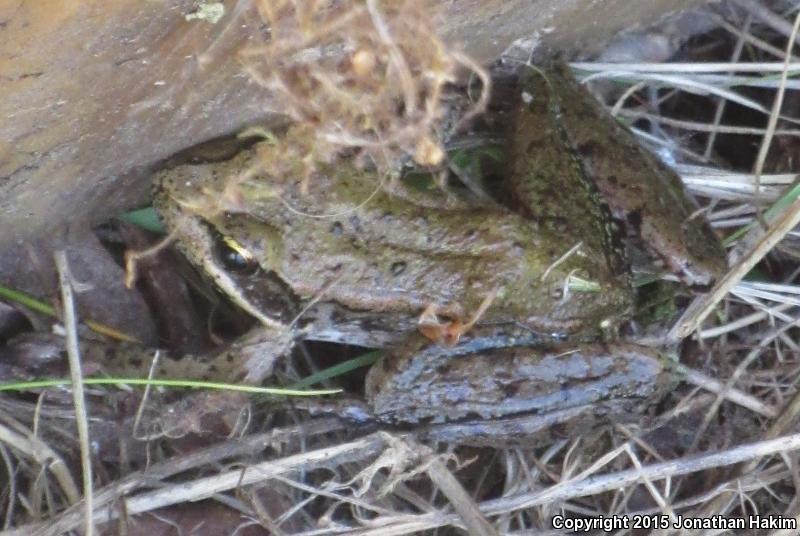 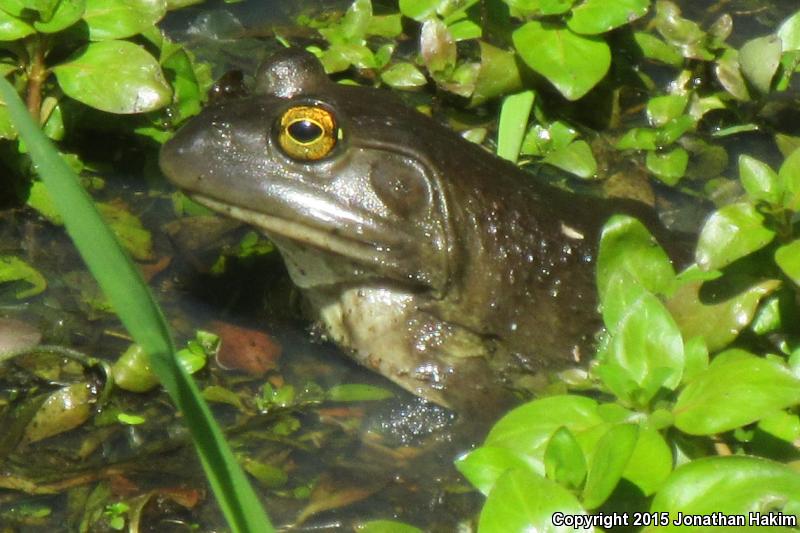 Northern Pacific Treefrog (Pseudacris regilla) (1st record for Clackamas is call only, another seen but not vouchered) 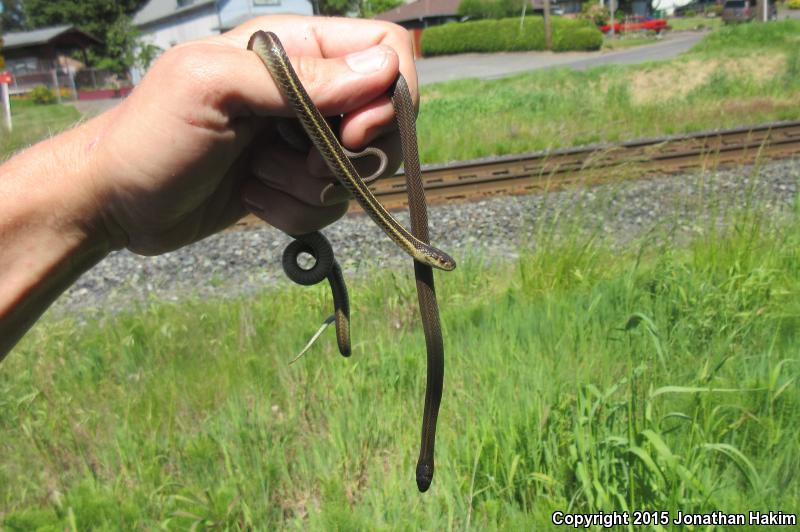 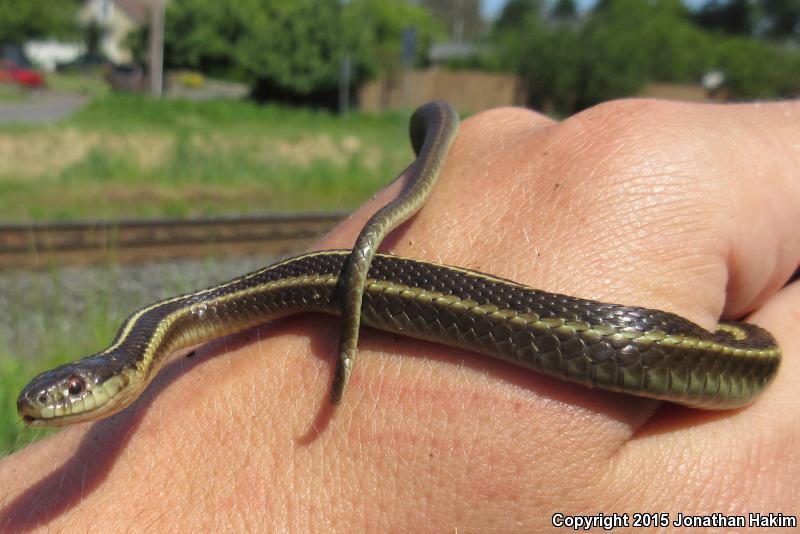 I have an ongoing quest to voucher stream salamanders from as many Portland-area streams as possible. To this point I've looked at 8 streams and found giant larvae in 7 of them! This isn't representative, of course – all 7 streams where I found giants were in places that I knew would be good habitat. During this trip I was able to add 2 giant streams to my list. 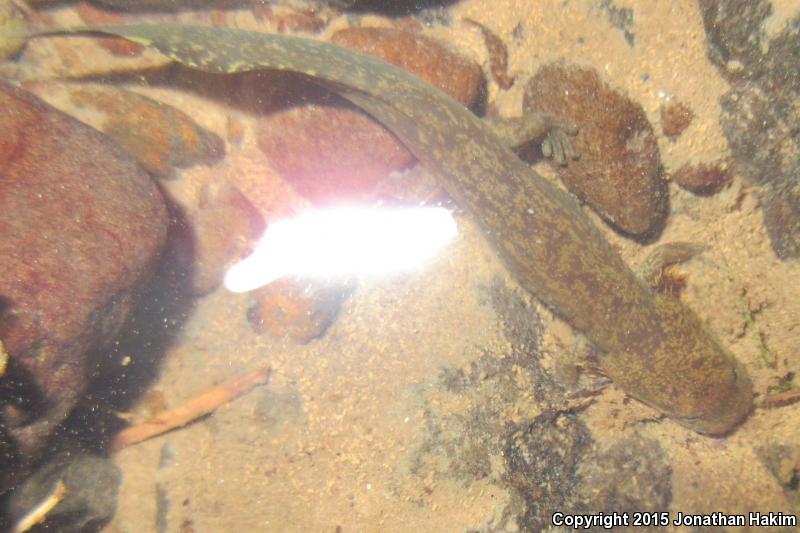 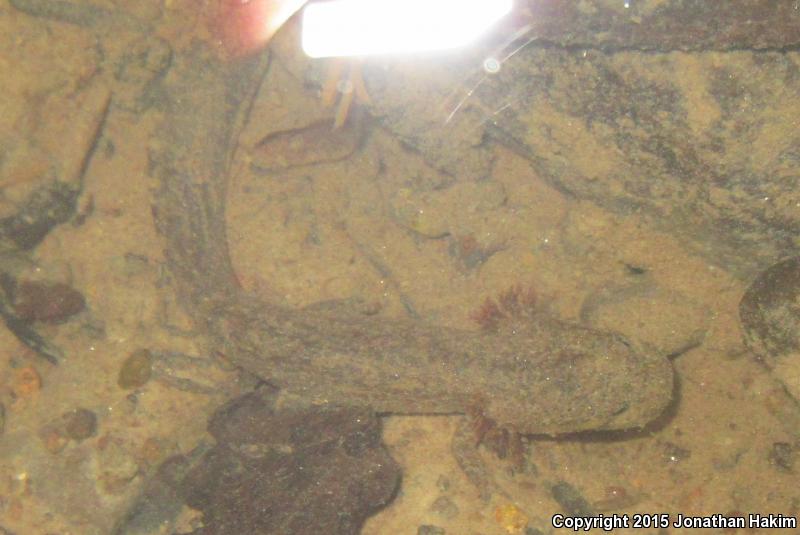 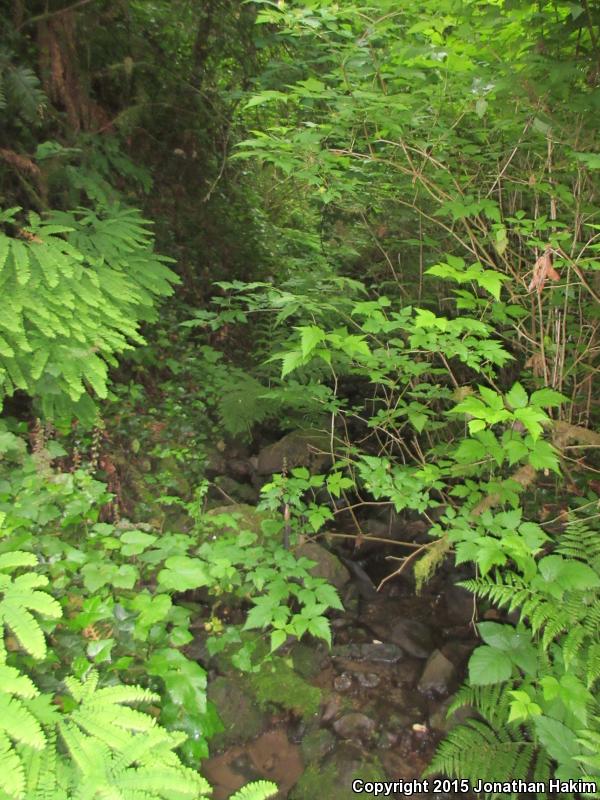 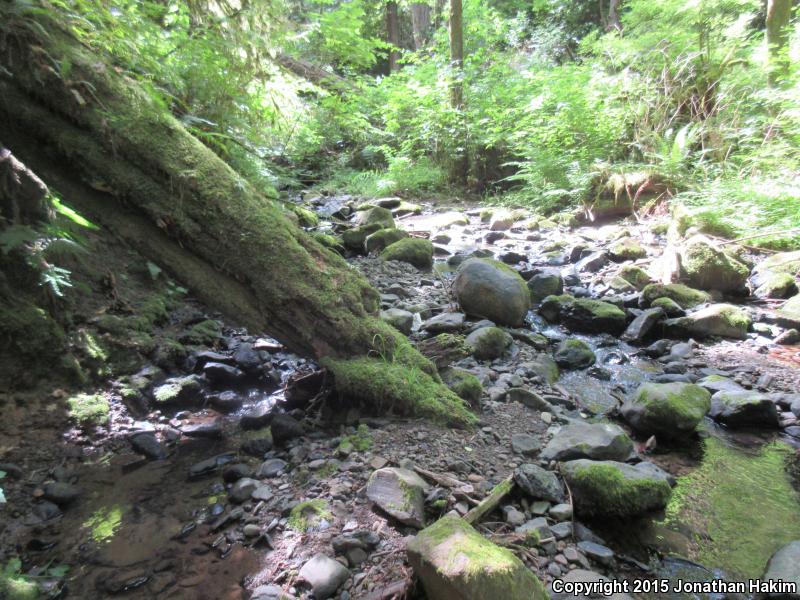 Other salamanders were in springs and hillsides in the same areas. 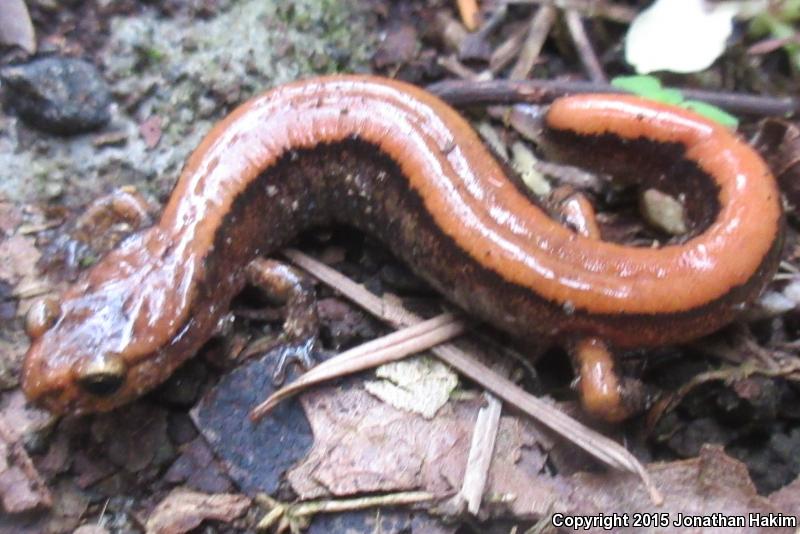 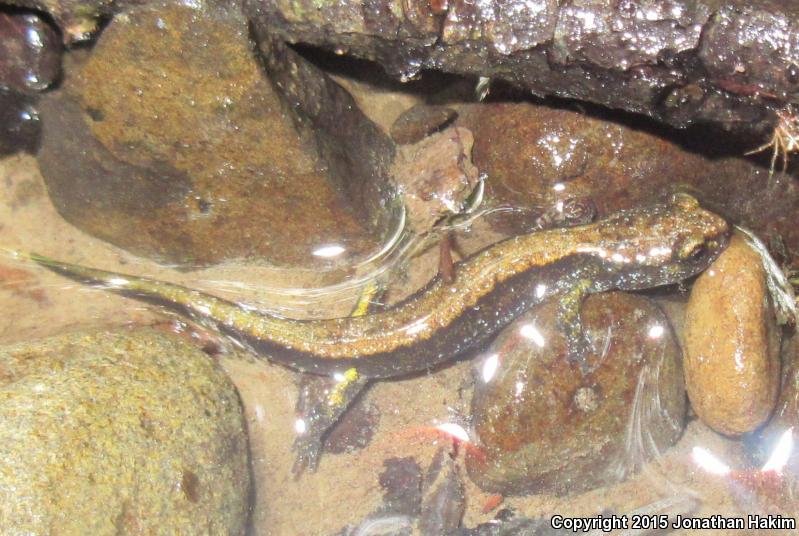 Matt and I tried to hit up a few clearings, looking specifically for rubber boas, racers, western terrestrial garter snakes, and alligator lizards, all species that had not made it into the database for Multnomah County yet, much less Portland itself. That changed about 3 seconds into the very first spot we looked! Less than 10 feet from our first trailhead, Matt spotted an alligator lizard, I dove, and we had a new county record.

That area produced three more alligator lizards and well over 50 northwestern garter snakes, nearly all of which were neonates or juvis. I thought it certainly looked like possible rubber boa habitat, but we didn't see any. 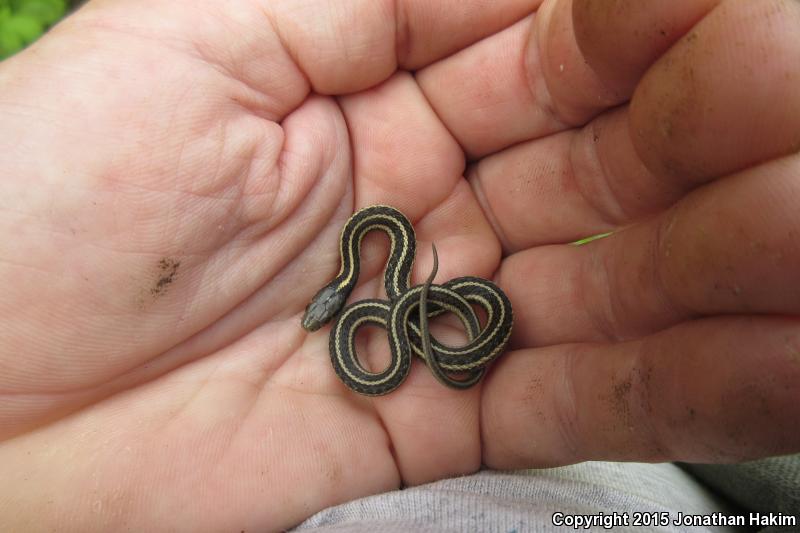 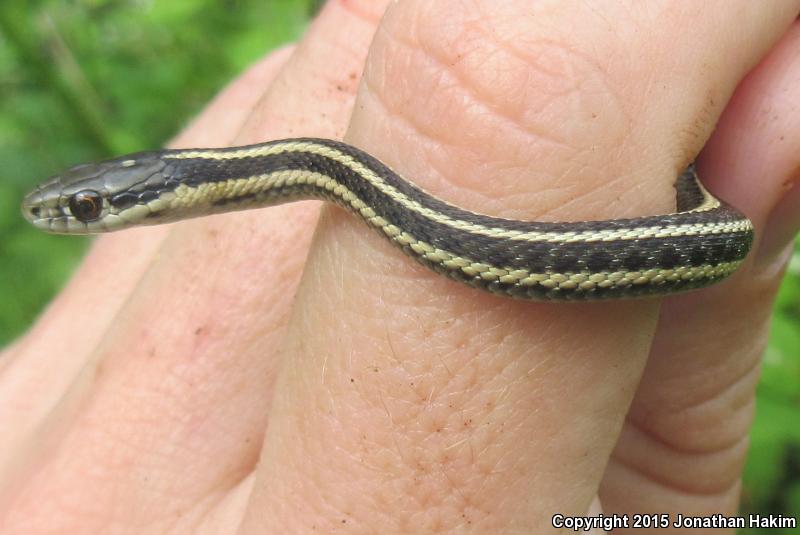 this one was holding an odd raised position 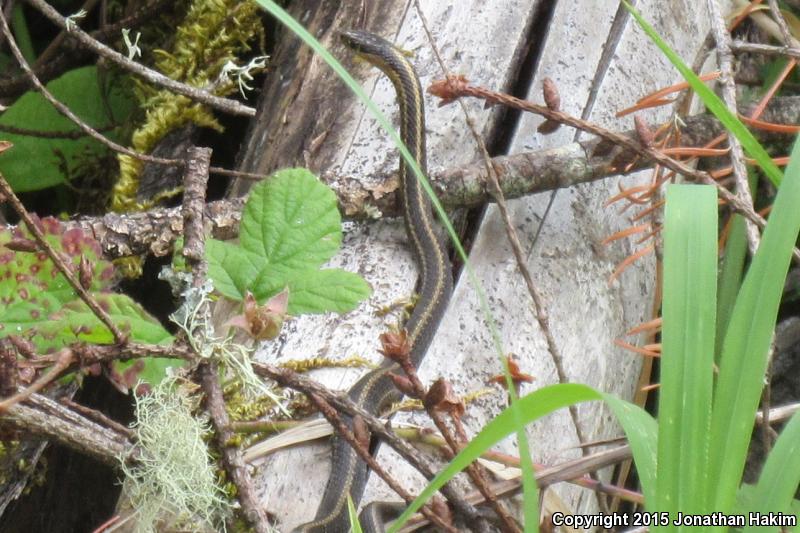 We struck out on herps entirely in our second spot. On another day in a third location, I found some pretty habitat. On this cool day it only produced an alligator lizard and a snake shed, but I think there's a chance it could be WTGS habitat or something else. 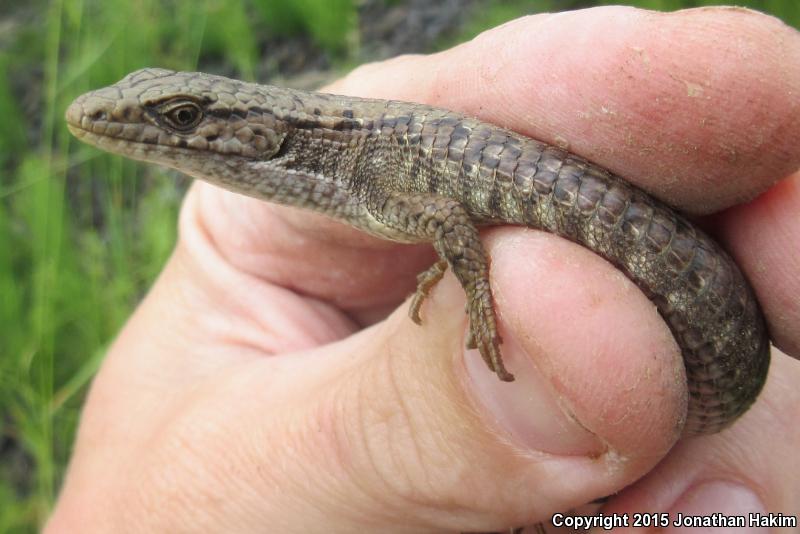 To this point, we've found the following herps in Portland itself (within the city limits).


If you take the entire Multnomah County metro area all the way out through Troutdale, I could also include the following:


Notably absent amphibs are Northwestern Salamander (obviously there, I just haven't seen one) and Western Toad. Perhaps there's a distant chance that Columbia Torrent Salamander could be found somewhere on the west side of Multnomah County as they can be found in both Washington and Columbia Counties, but there isn't a spot where the habitat is quite perfect. Same goes for Tailed Frogs. I also haven't been able to verify Clouded Salamanders from Portland itself, though I keep hearing rumors.

Reptiles are much more notably absent. Where are the skinks, rubber boas, racers? Stretching a little bit, how about Western Terrestrial Garter Snakes, Ringneck Snakes, Gopher Snakes, Southern Alligator Lizards? Two NAHERP herpers have recorded fence lizards in the Portland metro area, but they appear very isolated. Also, are there any Western Pond Turtles left in Portland, or have they been extirpated?

So here's the species I still want to verify in Portland myself:

Your post made me recall that I found an adult Western Toad in Multnomah county in 2008, and that I had a photo somewhere, which I just found and entered the record. It was in the upper Sandy river basin northwest of Mount Hood, so certainly not in the Portland area.

As I have mentioned before, I have found rubber boas in the past around the Portland area, in fact one very close to one of the locations you have posted about, 10 years or so ago. Fence lizards appear to be here in at least very small numbers, and I have found or heard of western skinks in and around the city in the past. Data that i've seen from egg mass surveys in several Portland watersheds indicate that Northwestern Salamanders are fairly common, although I have only ever seen one adult.

Also there is (or was) a population of eastern snapping turtles (http://www.dfw.state.or.us/conservation ... _sheet.pdf) at a couple of sites in Beaverton, it's not unrealistic to think some might be in Portland as well.

None of the others have I come across locally in the last 30 years of paying pretty close attention.

I'm not sure how many different locales you have for Northwestern alligator lizards but include mine as well (recent records added). I'm aware of a few 100% verifications of rubber boa's and skinks both in the gorge and the rest I have no clue. A local pond east of town has a sign indicating Western Pond turtle presence and is also where my fence lizard record came from. I've been there many times but nothing has yielded a turtle.
Top

Funny that both of you plus both Matt and I all poured Alligator Lizard records this summer after the county being empty for so long. Went from 0 locales to 7 locales in just 3 months!

Great toad entry Darian. I see that it's at 1400 feet, getting into the foothills. I've only seen one west of the Cascades in my entire life (on the railroad tracks near Timber). Not really sure why they seem to be so uncommon on the west side.

Makes sense that northwestern salis, rubber boas, and skinks are all in the city too. Hopefully all three are still doing well - I would there there's enough habitat there that strong populations should still be present.

Yeah John, skinks and rubber boas are certainly in the gorge, strange that no one's got those records yet.

I've been to that main snapping turtle lake in Beaverton and I also know of a lone individual in Ranier, so it wouldn't be a surprise to find one in Portland. I've heard that pond turtles might still be found around the mouth of the Sandy River, but only got one chance to visit and didn't see any. I really hope viable populations are still around.
Top
Post Reply
4 posts • Page 1 of 1