Two links from today, 1 Facebook, and 1 a local media outlet, re: a Yellow-Bellied Sea Snake found in Oxnard, Ca. Further proof that El Nino is here. Anyone want to field herping, on the beach!?

Amazing, my wife woke me early this morning to tell me what was on the TV-news, a Yellow-bellied Sea Snake, and I sprang up shouting... "Holy Ship!" well, maybe I pronounced ship wrong at that time, but simply WoW! If any one else hears of more, please take note of the beach and post it ... Who, what, where, when!!
Top

...there's a new twist on an old and common gaffe

Seems that should get entered in the NA Herp DB, by whatever means.
Top

For the first time in memory, I was thinking of going to the beach today. When I mentioned it, my wife was like, "OK, what's up? What's at the beach you want to see?" Not a real beach person me.

I work where I most likely will hear about it if another gets washed up. I will make every effort to get to the beach and take a few photos.
Top

Dang, im still in shock. Im about to head to bed now, yet this post and the discovery is heavy on my mind. All i have to say is, sweet dreams -- and i'm going to find one in Cali soon {{wishful thinking}}.

BTW according to the SSAR the Pelamis name is out, and some other name (which i agree with) is in..

Mohave = people of that desert; and Mojave = the region, plants, and animals.
Top

Body position and angle is perfect

I've been wanting to try tide pooling. What are the chances of one hiding out in a pool? Would the stay or just head back out to sea?
Top

One washed up dead... one crawled back to sea... and the other crawled to the first water it found and is in the tide pools on the north side of the beach. Someone get the hell out there and save that damn thing!!

it's the GoT damned weekend for nice sake

Did anyone else catch this reference in the LA Times?


"Officials are warning the public not to touch such snakes. Instead, they said to take photos and report sightings and locations to iNaturalist and HerpMapper websites."

am i the only one that thinks this is not ok?
Top

Matt, Not okay? why would it be bad?
Top

So long as the coordinates are accurate, I don't really see a problem, either. Christopher Smith is a Herpmapper project coordinator, and I assume got in touch with the finder via the facebook thingamajig. Seems legit enough for me.

Why are they making a record for something that is already in la county Nat hist museum. If I started making records for every herp in the news that would be ridiculous. He doesn't know anything about the find more than anyone else . I had to correct him already he had silver strand beach in San Diego co. Instead of Ventura.
Top

If sea snakes are flowing our way, to California, then Pacific Ridley and more Green Turtles should also be on their way. Interestingly, a Hawksbill Sea Turtle has never been confirmed in California's waters, perhaps this will be that year.

When seeking marooned Yellow-bellies in Costa Rica, people told me to walk the beaches in the very early morning. I have sent out the word to my surfer buddy and for him to tell his friends, and get back to me ASAP if they discover one.
Top

I saw a green while free diving on Catalina at the end of August. Although I saw two in the same amount of time (a month) spent on the island in 2014 so I don't know if this can be attributed specifically to the predicted El Nino or more overarching warming trends in water temperature. In addition to the pelamis and the recent hammerhead that made the news, a few mantas were also been seen in Southern California in late summer. Who knows what's going to be next!! (I'm hoping whale sharks...)
-Elliot
edit: just remembered flickr does video now so here's a link to the video 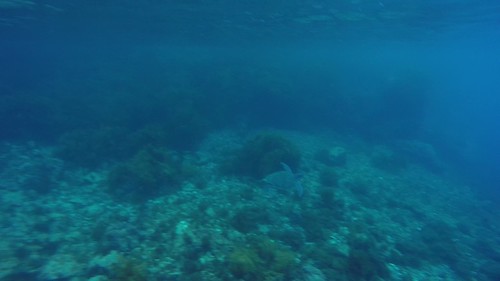 So 3 specimens in total? I guess they'll be the next Cali SSC

Look at all that sea grass for Green Sea Turtles to eat. Makes me think, are there sufficient sponges in California waters to sustained a miss-guided Hawksbill for any period of time?

So Elliot, let me make sure I got this correct, you have been seeing Green Sea Turtles at Santa Catalina Island from 2014 till August 2015. It looks like a female Green Sea Turtle to me, and with all that sea-vegetables around that would coincide with their diet and preferred hangout. But is there any chance, they could be Ridley? Also I don't think that is sea grass in the video, does someone know a more accurate name that "algae?"

As an interesting side note, In 2005, a nomadic Ridley deposited several clutches of eggs on Santa Cruz Island, off the coast of Santa Barbara County. Biologists theorize she was disoriented and desperate to nest. Unfortunately, all eggs failed to hatch, presumably due to high storm surf that struck the site and inadequate warmth.

Dang, Whale sharks that would be awesome. I did hear about the Hammerheads, but didn't believe it until I saw it with my own eyes on the news. I think I'll be taking my son to the beach more often this year, sounds like an awesome place, if you like surprises. Since it appears there is a shift in the ocean and wind currents (not global warming as some want to believe), perhaps more nesting turtles will seek a remote places to nest on California's islands.
Top

I spent July of 2014 and august of 2015 on Catalina. In july 2014 I saw 2 different turtles and 2015 I saw the one in the video. I just kind of assumed green last year because that's what I had thought was most likely and I had seen another picture of a green off catalina, but the turtle in the video this year is definitely a green. To answer your question about the algae in the video, it's actually a nonnative sargassum sp. This year in particular, high water temperature caused massive kelp dieoffs in many areas. What were large kelp forests in some parts of Catalina in 2014 (and in the past) now look similar to what you see in the video with lots of sargassum growing off the rocks. Not sure if this turtle was eating the sargassum itself or other algae but it was definitely eating something before it swam off.
-Elliot
Top

"By 1930, these high-tech whaling fleets were killing some 50,000 whales worldwide every year."

Hammerhead sharks, pelagic red crabs and sea turtles are all common sightings along our coast during strong El Nino events. I spent may years fishing offshore in SoCal waters and have witnessed these species many times. During the past two summers there have been a good number of wahoo caught on hook and line, an event that almost never takes place here. This year is also producing a good number of blue marlin, a species that is rarely seen north of central Baja California waters. Pelamis is a species that is common to the same warm tropical seas where we find wahoo and blue marlin. It's not a surprise to me that a few of them are showing up on our beaches this year. When the El Nino event ends, so too will end the sightings of these tropical sea creatures.

BTW: Despite the efforts of Al Gore and the Obama administration to to stop global warming by taxing us into extinction, the Earth has been warming steadily for the past 11,700 years since the last great glacial event of the Quaternary Ice Age. This means that if you guys can hang on long enough (like maybe only another 2000 years or so), you will probably see a day when sea turtles and sea snakes are common summer visitors to California!

you lost me, Dude

Well, all I can say is, lucky for you (and lucky for your kids) that parents have a great influence on how their kids turn out.

Most of us don't let the media, the state, sports idols or celebrities raise our kids. Parents who ignore their kids are losers, and their kids quite often turn out the same.

And as far as humans making it as a species for another 1000 years goes, I'm not betting on that one!
Top

I have an undeveloped rough edged theory that has nothing to do with the post subject. I'd rather not get into it. No disrespect to you Steve or anyone else.
Top
Post Reply
31 posts • Page 1 of 1