copied from the main forum

copied from the main forum

This will be my annual post on the forum announcing my field season has ‘officially’ begun as of today, January 22, 2016. This has been an annual ritual on this forum and years earlier, on the KIngsnake forum. So this announcement will be old news for most forum participants. Normally, my announcement has taken place sometime in February. But this is the third consecutive year that my season had begun in January.

For the past 2 – 3 days, a warm storm front entered off the Pacific into the Pacific Northwest. I mention warm in the sense that it has been 50 degrees F. or a bit above the past 2 – 3 days although we have experienced mostly overcast conditions with plenty of rain. This morning, the cloud cover was broken allowing sun to increase surface temperatures.

Then by about 1 PM, the cloud cover began to increase. By 2 PM, it was mostly overcast but still 55 - 57 degrees so I headed to the field. I briefly check a few roofing tins at 4 sites and came away with 3 adult male Rubber Boas. To my surprise, at the second site there were two adult W. Fence Lizards under one tin.

Wow that is quite interesting! I also went out looking today, not nearly as exciting but I found ~10 long-toed salamanders in the pond ready to breed near Seattle, no frogs calling yet.

That is great to hear. I am going to be up in Seattle in just a few weeks. Hopefully the weather will cooperate.

I'll split the difference...in Portland the long toed egg masses are thick (in a couple spots Ive checked recently anyway) and the frogs just started getting after it this week as well with the higher temps. On Sunday I flipped a log at the edge of a breeding pond and this was the scene that I found, untouched: 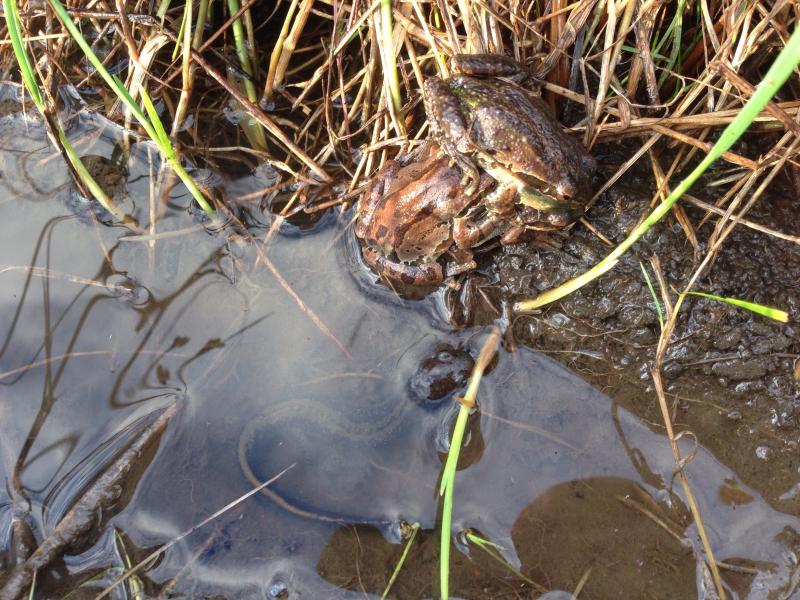 Let me add to the conversation here: on Sunday (the 24th) I found a single long-toed salamander in a pond in Moscow, ID. He was all alone, but I imagine that will change soon (if it hasn't already).
Top

Tonight the frog chorus was deafening and I found a Taricha granulosa on the crawl.
Top
Post Reply
6 posts • Page 1 of 1