In February I taught a week-long class at St. Matthews University on Grand Cayman Island. One of the highlights of any trip to Grand Cayman is to see the endemic Blue Iguanas, Cyclura lewisi, at the Queen Elizabeth Botanic Park. 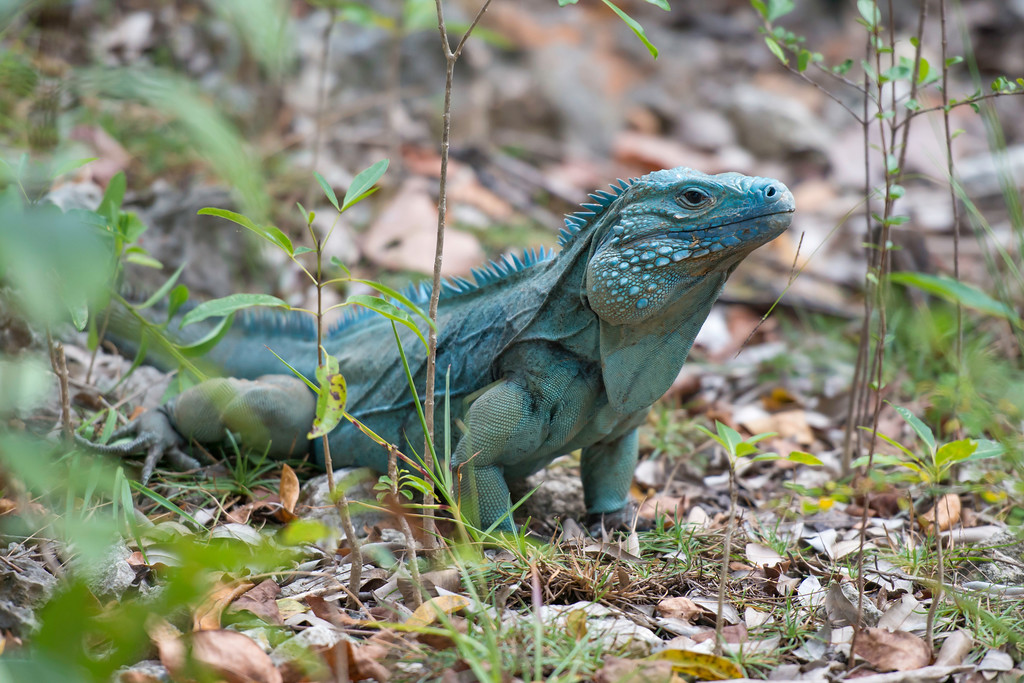 Blue iguanas are one of the most iconic and one of the most endangered reptiles in the world. The Blue Iguana Recovery Programme started a captive breeding program with 21 unrelated lizards in the early 1990s. Eggs are incubated and young lizards are raised in captivity for 2 to 3 years until they are too big for Cayman racers, Cubophis cantherigerus caymanus, to eat them. The head-started lizards are then released to the wild.
This Cayman racer was my first snake of the year.

Until recently blue iguanas freely wandered the trails of the botanic park. They were used to the presence of humans and allowed close observation. Sadly, 2015 brought two challenges. First, a number of iguanas were found ill with what proved to be Helicobacter septicemia. Some died, but others were treated and recovered. Second, feral and unrestrained dogs began entering the park and attacking and killing the iguanas.

All the blue iguanas have been rounded up and are being held at the iguana breeding facility for safe keeping until a fence around the park can be completed to keep the marauding dogs out. The trails are gloomily empty of all but invasive green iguanas, Iguana iguana, which are being culled as pests.

Empty hide in the botanic park placed for the blue iguanas.

The blue iguanas can still be seen on daily guided tours (M-S, 11:00) of the iguana breeding facility or though viewing windows along the trail. Because my host is the dean of the veterinary school and helps with the Blue Iguana Recovery Programme, we had a private tour of the facilities. 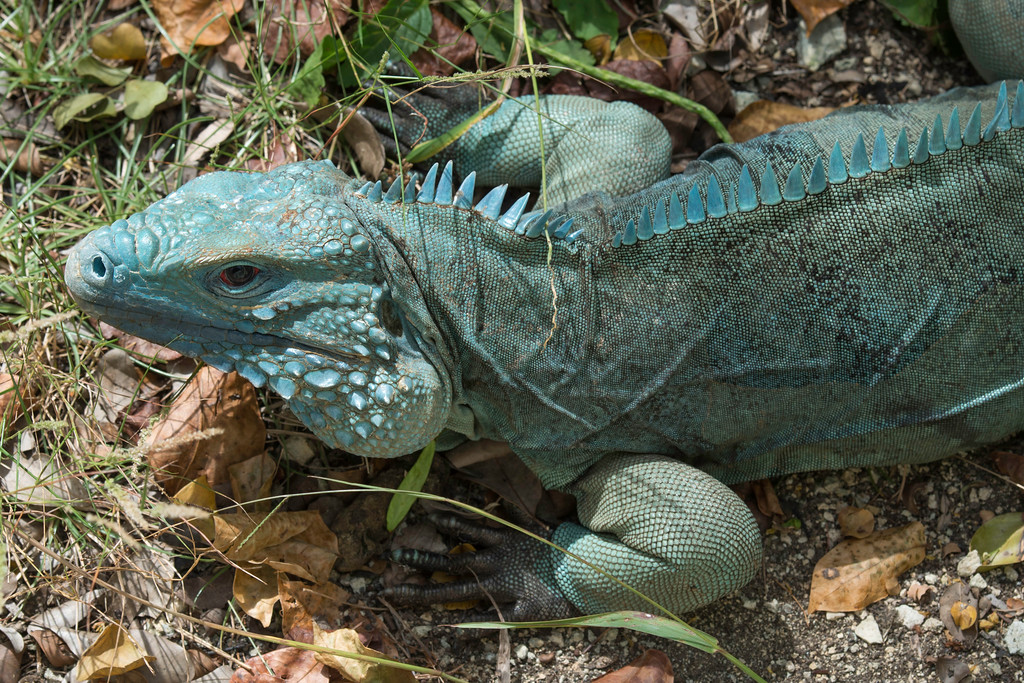 The noni fruit were in season and though not native, are the iguana’s favorite food. Whenever an iguana spots a noni fruit, it sprints from a distance to grab it before another iguana can beat him to it. 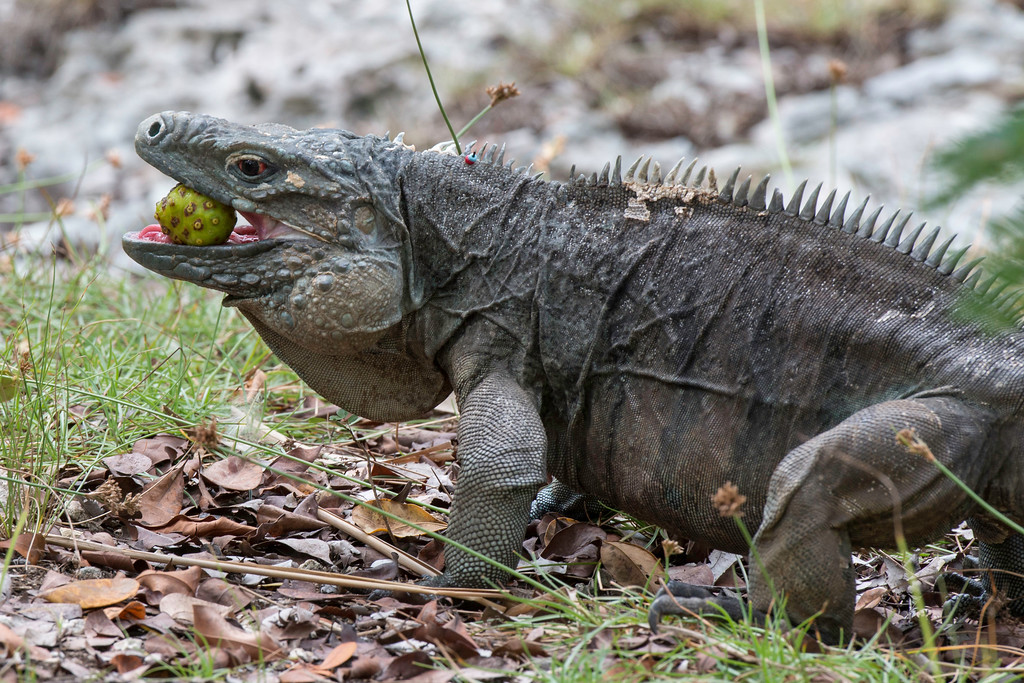 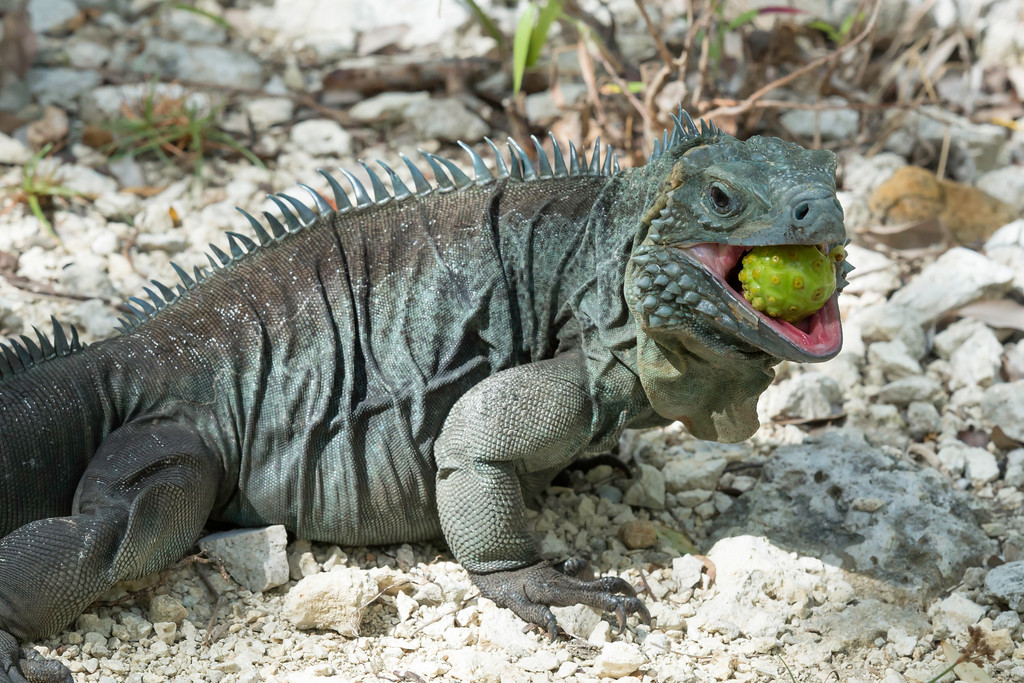 All the blue iguanas have a unique pattern of colored beads placed in their nuchal crests so they can be identified from a distance. Walking through the park we were lucky to spot a wild-born juvenile with no beads that had first been seen in December. So far it has eluded capture and marking.

Other cool things in the park:
Blue-throated anoles, Anolis conspersus 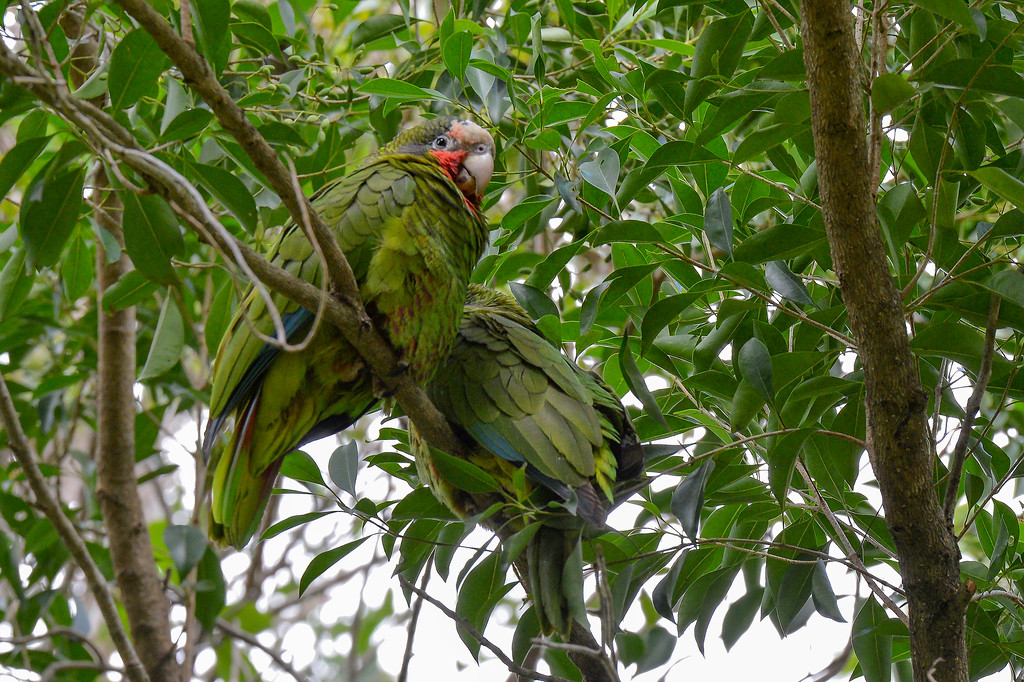 It is a botanic park, after all

The highlight of the week was being invited to participate in the release of a group of head-started blue iguanas. As part of the pre-release health assessment, I got to take blood samples form 26 juvenile blue iguanas. It was an unseasonably cool morning and the iguanas were cold and slow. We normally take blood from the ventral caudal vein in the tail, but it wasn’t flowing well with the cool temps so we switched to the jugular vein. The syringes filled quickly with minimal stress to the patients.

A few days later we met in the Collier’s Wilderness, the most remote part of the island, to release a group of 8 head-started blue iguanas to the wild.

Seen next to the car

We hiked off road along a “trail” over the iron shore for some 45 minutes and located the preplaced iguana hides by GPS. The trail was as rough as I’ve ever seen and it tore up and ruined my shoes. Biologists for the National Trust said a good pair of hiking boots only lasts a month on these trails. 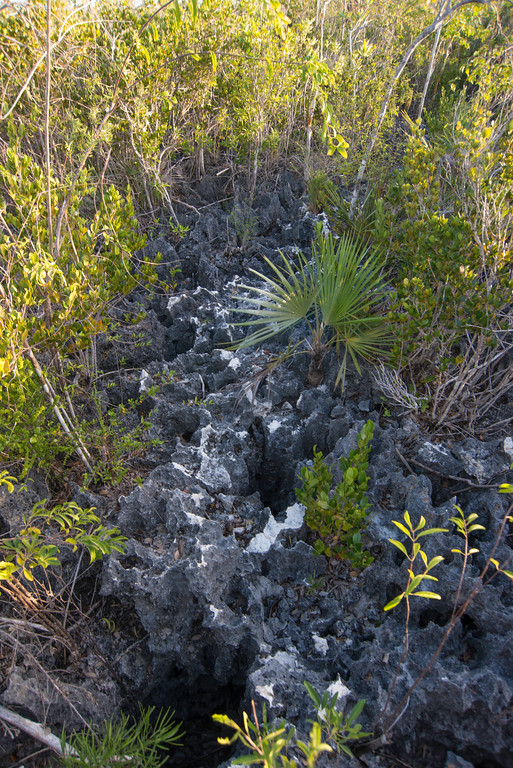 We heard several wild blue iguanas, but they heard us first and retreated into the brush before we could see them.

Everything along the trail was stabby. There was both manchineel and maiden plum, both of which make poison ivy look like aloe.

One of the preplaced iguana hides.

Some hero carries these in 5 at a time and spreads them out in a predetermined area. Their GPS locations are recorded. The entry hole is blocked to keep other iguanas and crabs out so the hide is ready for the new release.

A soon to be released, head-started blue iguana. Note the colored marking beads.

If the plug blocking the entry hole has become dislodged, Paul makes sure the hide is empty using a scope.

Hillary, the daughter of my sponsor, volunteered to help with the project.

The iguanas are placed in the hide head first. They typically run to the back of the hide and stay there. Releases take place in the late afternoon. The iguanas usually start to venture out of the hide the next day, but have a safe place to which they can retreat. They stay with the hide for days to months before establishing their own territory. Monitoring of the population shows the survival rate of new releases to be very high, approaching 100%.

I got to place two of the released iguanas in their hides.

There are only some 800 to 900 blue iguanas in the world. The number was close to 1000 before disease and dog attacks reduced them last year. The breeding program adds about 50 new subadults to the wild every year.

Beautiful animals and beautiful photography! I also enjoyed your last post regarding these awesome animals. Keep up the good work!!

This is great, I'd always wondered how the iguanas managed to fit in on such a busy island.
What was the class you taught?
Top

Thanks John and mrhoyo.
The blue iguanas are limited to the botanic park and the inaccessible, remote and rugged east end. Invasive green iguanas, on the other hand, are throughout the most populous parts of the island, including all of George Town. You see them crossing roads, DOR, and perched on the sides of houses. It seems the greens like the softer, tastier ornamental plants around human habitation more than the tough native plants where the blues live.
Not that the greens stay out of the botanic park, there are just more if them in town.
St. Matthews has a small veterinary school with 16 or so faculty. They bring in visiting professors to cover various topics. I taught herp medicine.
Top

This post is so cool, a very interesting read! Are there any efforts being made to "remove" the invading dogs from the area? Definitely something to be considered, same with stray cats. Far too destructive to these places to allow to stay.
Top
Post Reply
5 posts • Page 1 of 1