As you might recall if you read my recent account of two days in Panama, I visited Peru with MT Amazon Expeditions in late January and early February, 2016. I had already been twice, in 2013 and again in 2014. This is a part of the world you could visit every year for your entire life and still find new herps each time.

Here's the whole gang from this year's trip. The six travellers from the Panama pre-trip were joined by Ben from Colorado, Michael from Georgetown, Queensland, Lorrie (part owner of MT Amazon Expeditions), Cliff from New Jersey, and Tom from London. 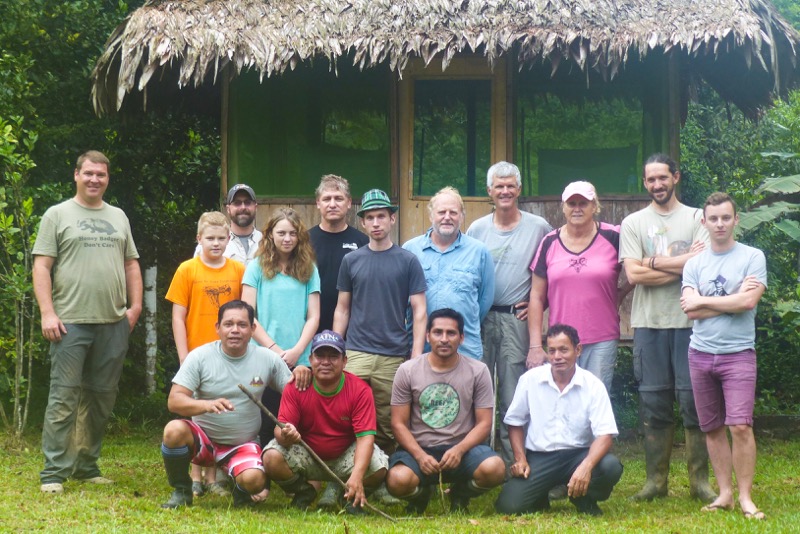 
But this picture is jumping the gun a bit. Before we rode a motorboat down the Amazon to reach the two field stations where we enjoyed the company, cooking, and herp-finding skills of the kneeling folks in the photo, we spent a full day in the relative metropolis of Iquitos. This post is only about that one day.

After a fine breakfast at Ari's Burgers, we hopped onto the ubiquitous mototaxis and headed to the Quistacocha Zoo. The zoo is an excellent place to herp, and I am told that they have some zoo animals also. 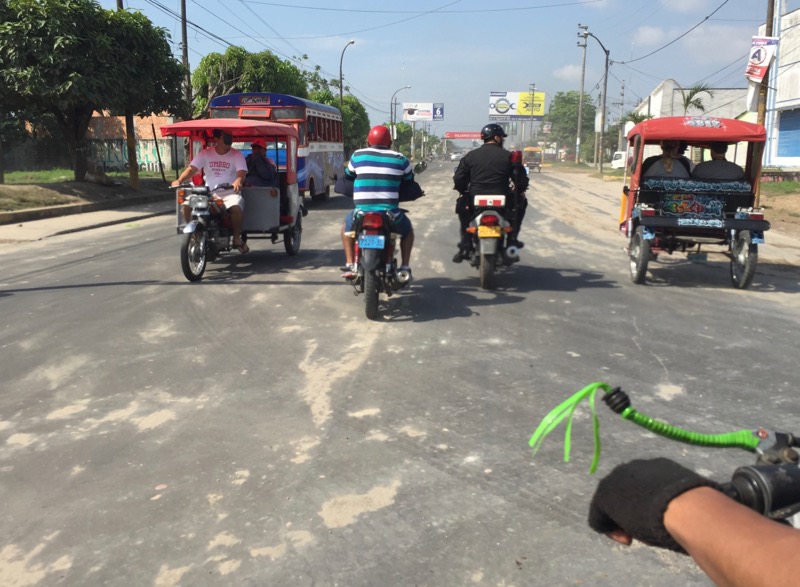 The only real road in Iquitos, less crowded than usual


The first official herp of the day was an anole in a tree just outside the zoo's ticket booth. Some people got good photos of it, but I was not among them. I did get a crappy photo though. 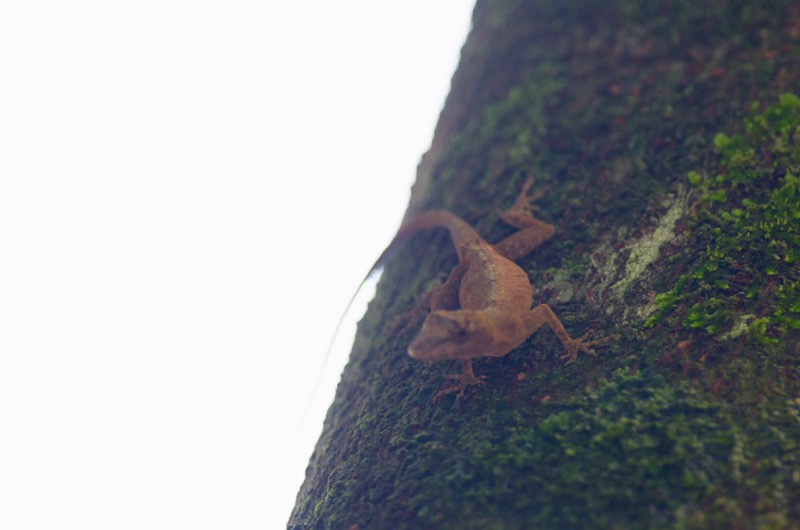 I think this is an Amazon Bark Anole (Anolis ortonii)


The most commonly seen herps on the zoo grounds were little diurnal geckos. I think all the ones we saw at the zoo were the same species. 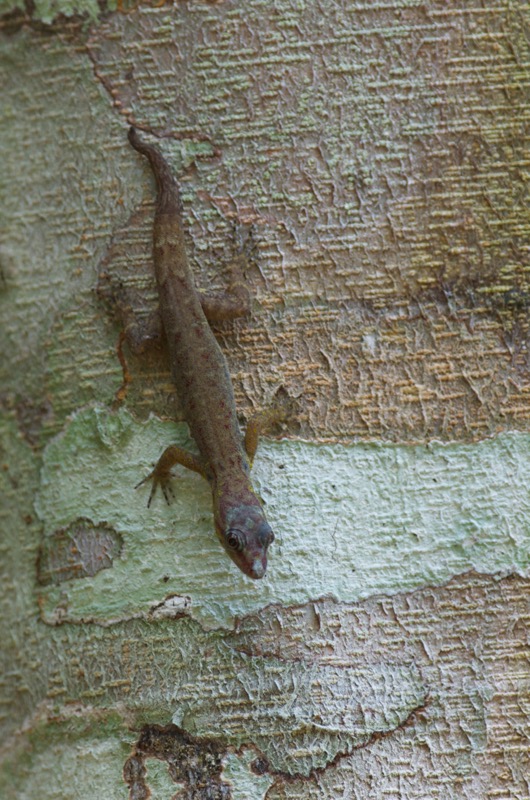 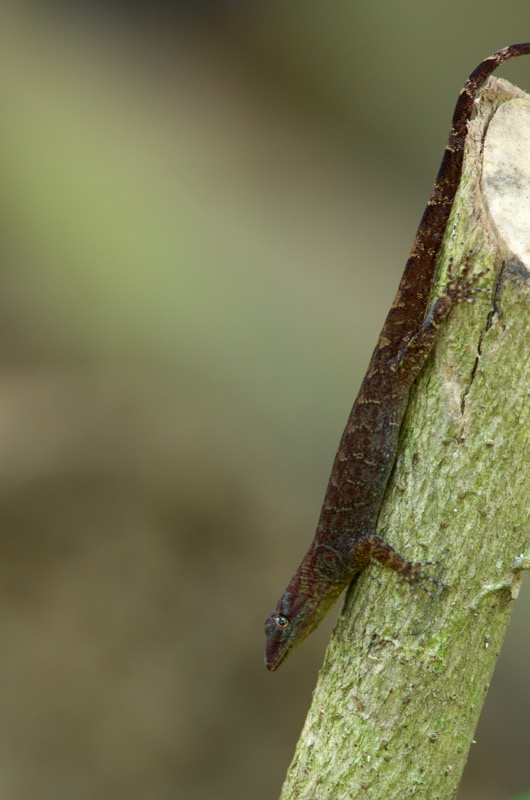 
A few iguanas wandered about. 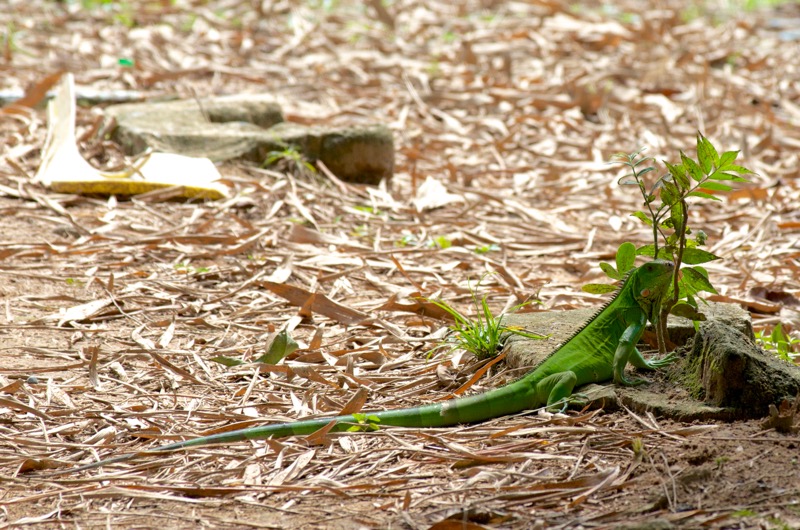 
One of our main targets for the afternoon was the Giant Ameiva a.k.a. Amazon Whiptail. These attractive lizards are pretty easy to find at the Santa Cruz field station that we would be visiting, but they tend to be very hard to approach there. At the zoo they are habituated to visitors and it's easier to get decent photos. They are still pretty skittish, but if you hang out in the right area long enough one will eventually sit still in the open for a while. 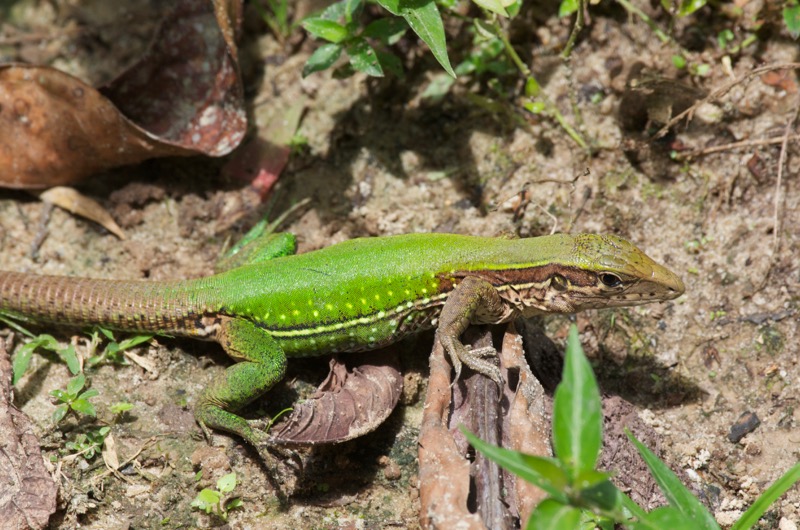 
I spotted a tiny lizard and got one terrible photo as it was disappearing into a tangle of roots and leaf litter. My best guess is that it was a juvenile Black-bellied Forest Lizard, but as I did not actually inspect the color of its belly I cannot be certain. 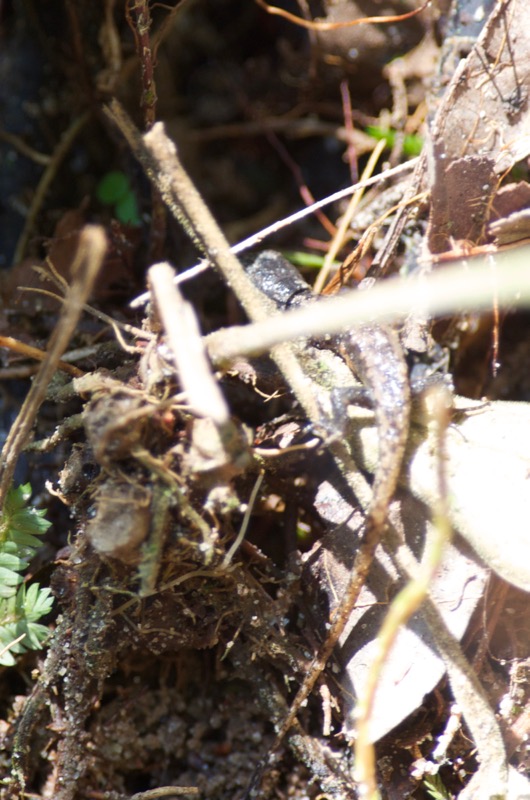 Seems likely to be a Black-bellied Forest Lizard (Alopoglossus atriventris)


Our top goal for the zoo was to find a species of poison dart frog that Matt and Lorrie had seen there on earlier trips, though not for a number of years. Soon enough, someone (I'm not sure who gets the credit, but it wasn't me) did spot one of these brilliant little jewels, perhaps a half inch long. We all gathered 'round and took our time taking photos. 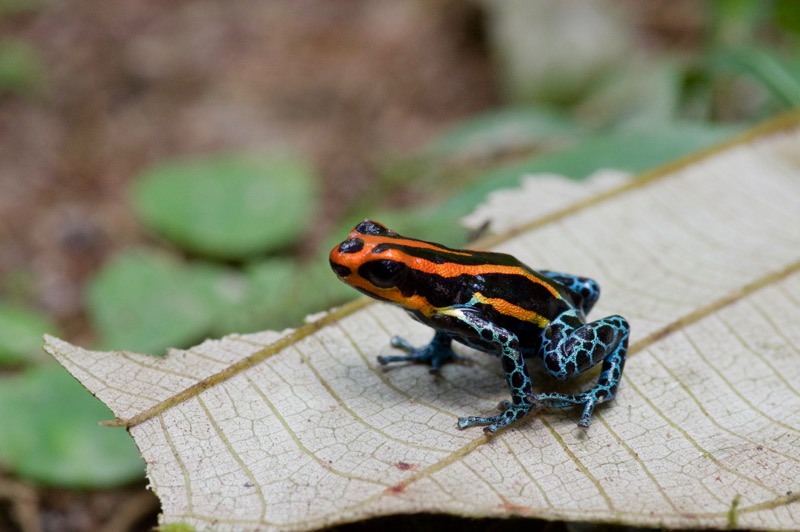 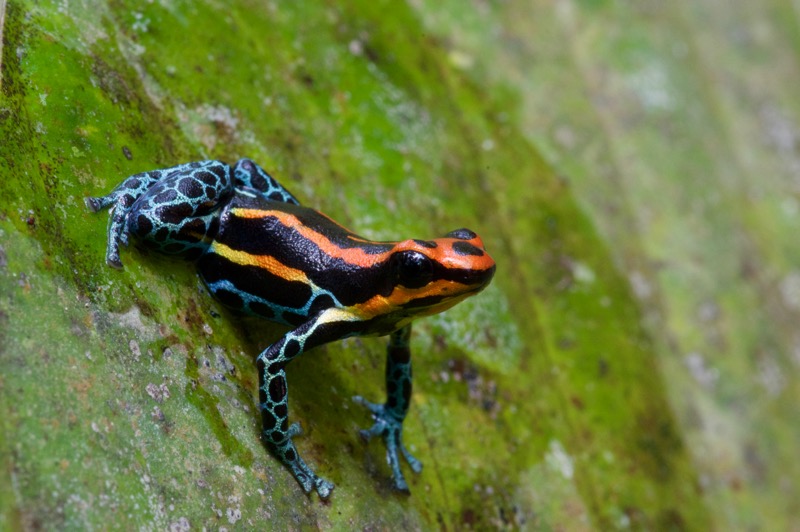 
While we were taking our time with this frog, Ryan got bored and wandered a short distance away, where he found an even smaller one. 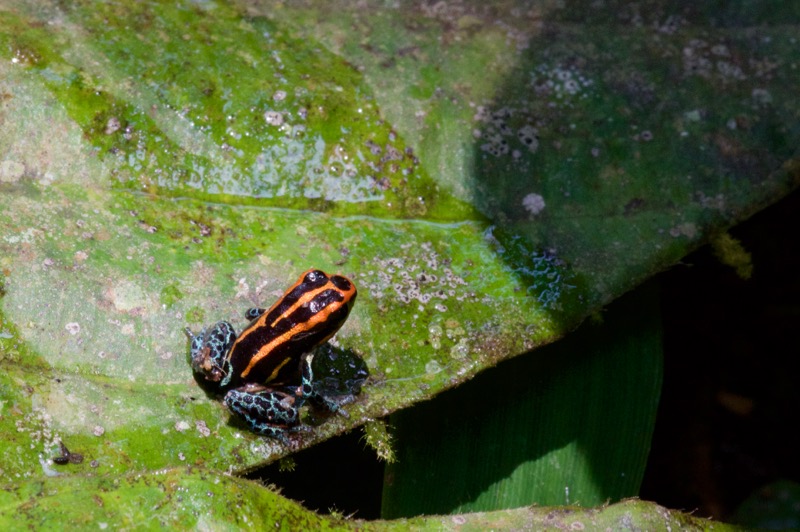 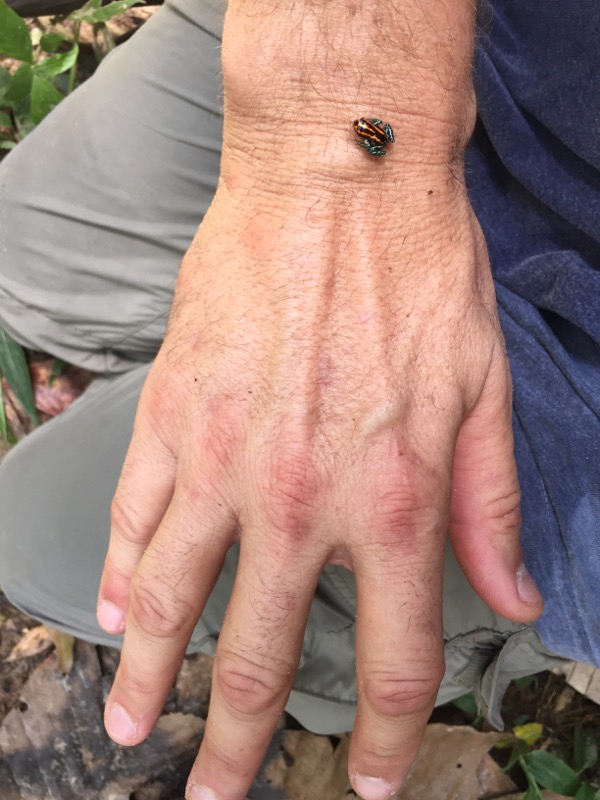 
After the zoo we headed to the nearby Manatee Rescue Center, because, well, manatees. Unlike their larger Florida cousins, Amazonian manatees live entirely in fresh water. They most certainly do not live in wooden houses. 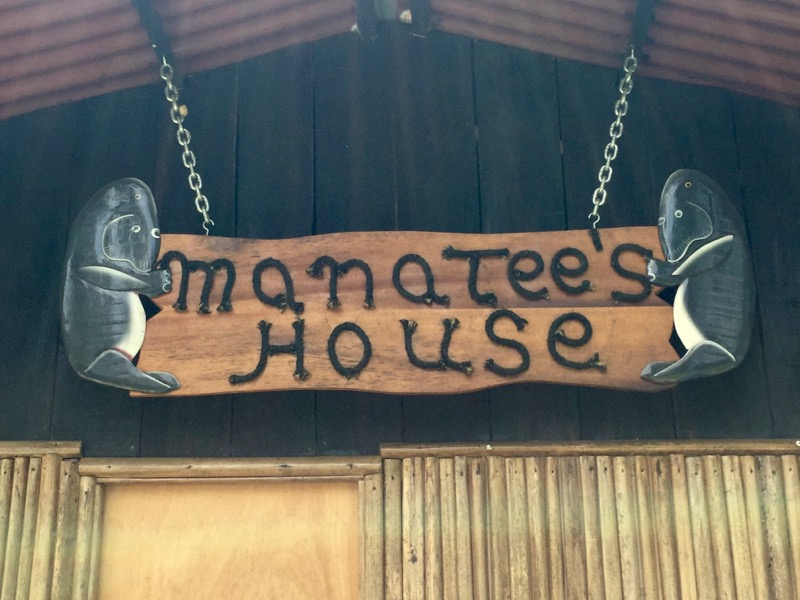 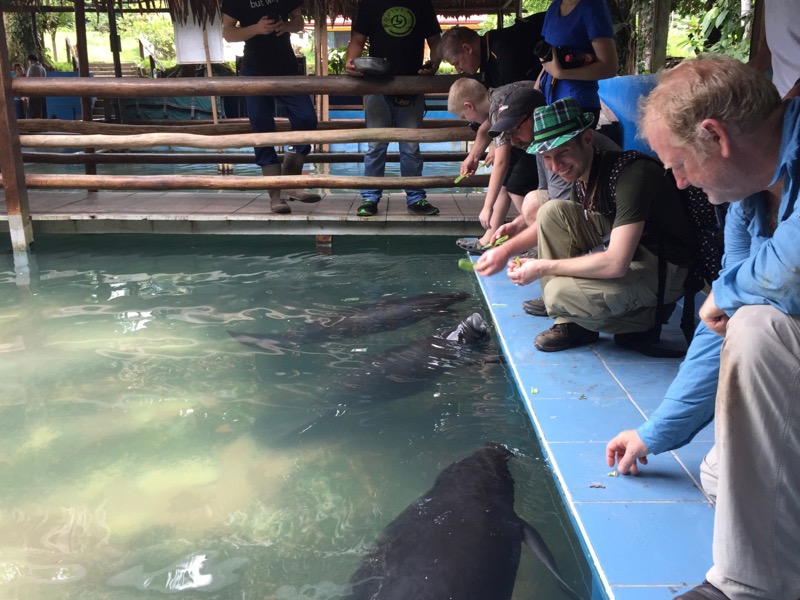 
On the way out of the Manatee Rescue Center a small lizard caught my eye, and I his. 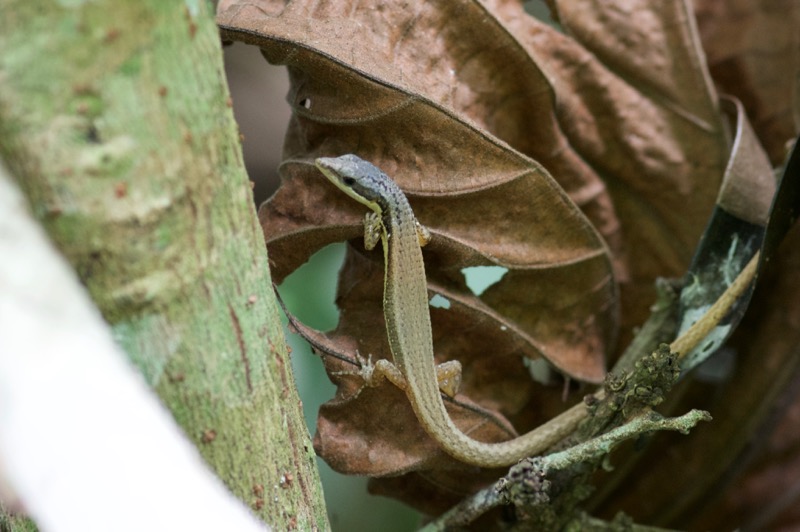 
In the evening it was time to road cruise, Iquitos style. We rented a bus, complete with driver, and took turns sitting near the front as we drove the Iquitos-Nauta Road, the only non-trivial road in the area. Depending on the weather, the traffic, and good old-fashioned luck, this road is sometimes fruitful and other times not so much.

At first most people were hoping to find a bunch of snakes, but after a significant snake-free interval we realized that if we didn't stop for frogs we might end up not stopping at all. So stop for frogs we did, though not without occasional arguments about whether a particular half-seen anuran was worth further investigation. Here are some that made the cut. 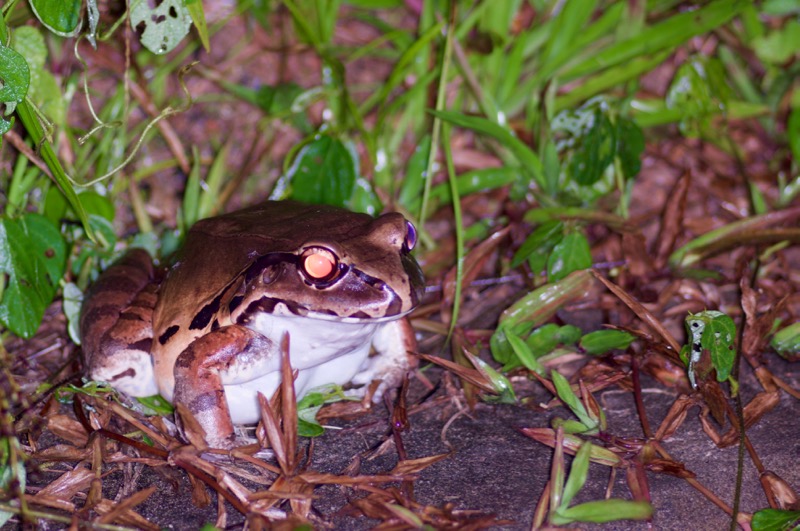 Smoky Jungle Frog (Leptodactylus pentadactylus). It is very difficult to get a flash photo of one of these immense frogs that doesn't have a terrible case of red-eye. 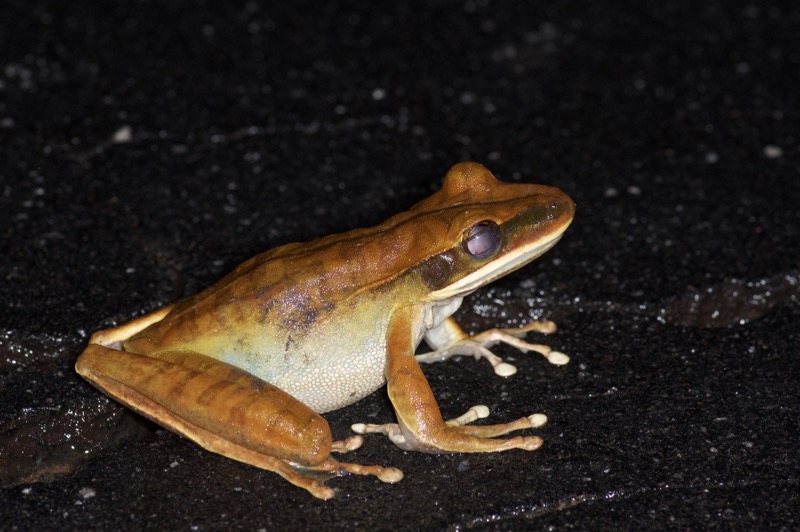 Rocket Treefrog (Hypsiboas lanciformis), with a non-red but still horrible eye reflection. I've taken lots of photos of these frogs without any weird eye reflections, so I'm not sure what was going on here. 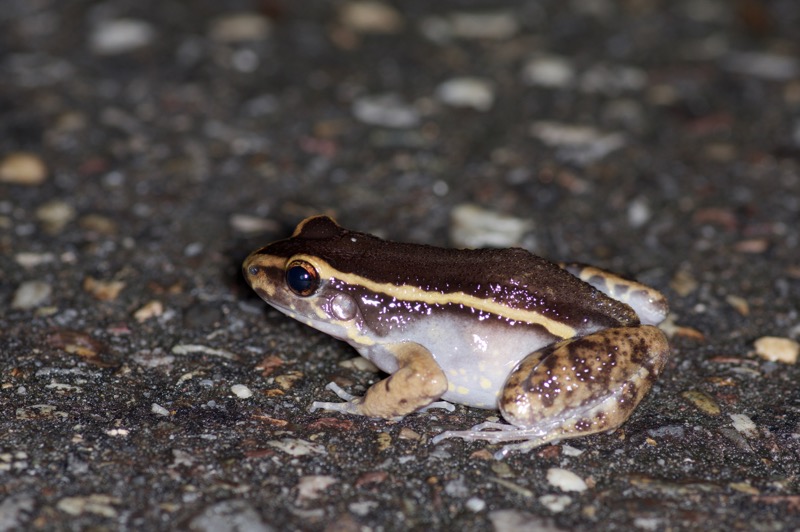 Painted Antnest Frog (Lithodytes lineatus). This species is considered to be a dart frog mimic, but very large individuals like this one (maybe three inches long) are quite distinctive and un-dart-froggish. 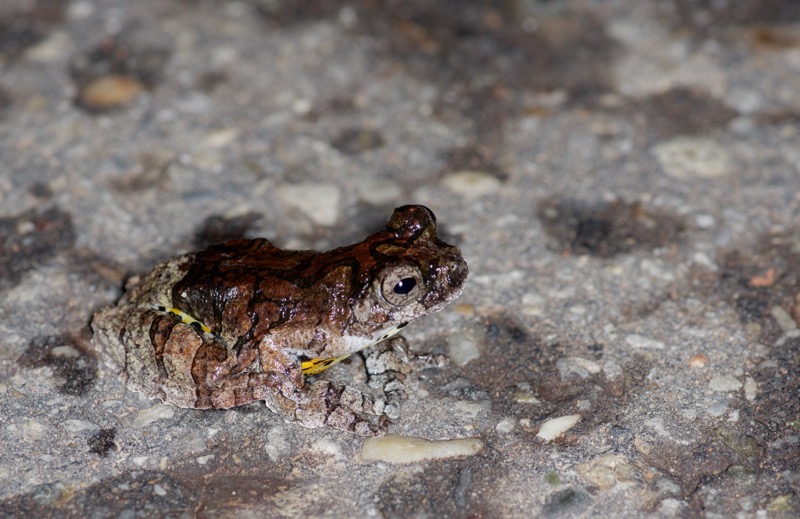 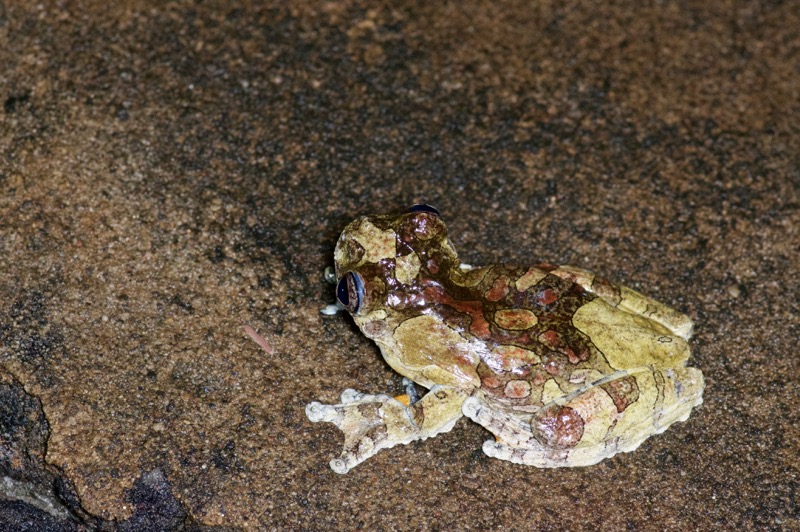 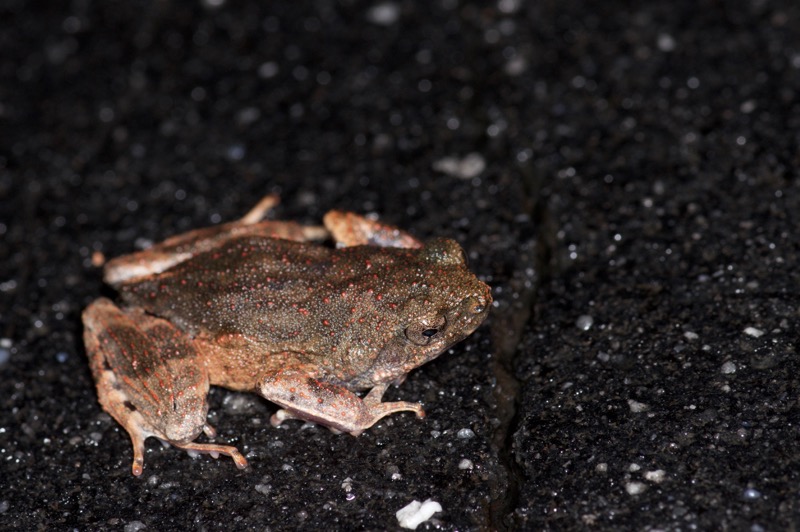 Painted Forest Toadlet a.k.a. Peters' Dwarf Frog (Engystomops petersi) is an oddly proportioned frog, looking like a very small long-legged toad. This was my favorite frog of the night, because it was the only one I hadn't seen before. 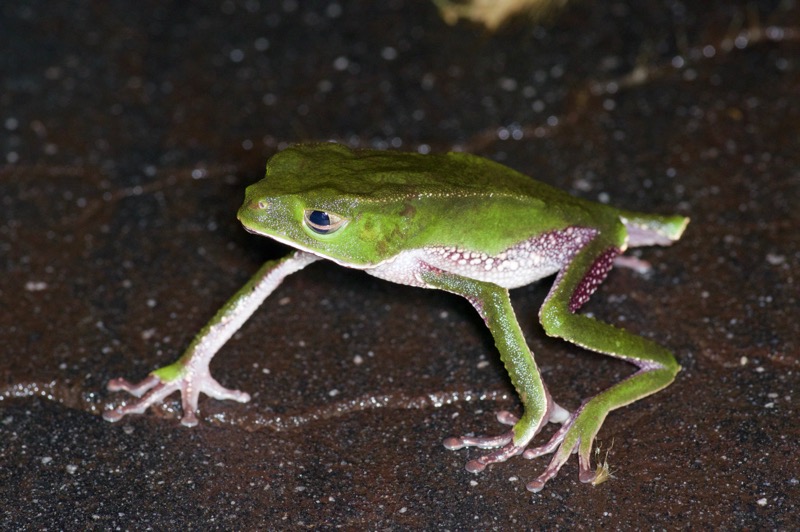 Speaking of oddly proportioned, a normally arboreal White-lined Monkey Frog (Phyllomedusa vaillanti) was holding this pose at the edge of the road.


We did end up seeing three snakes, but only one of them was alive. I didn't take photos of the two dead ones (Anilius scytale and Atractus latifrons). The one that was not dead was a brilliant red and extremely uncooperative Amazon Scarlet Snake (Pseudoboa coronata). We all gathered around it for at least fifteen minutes using various techniques to unsuccessfully encourage it to sit still for a few moments. 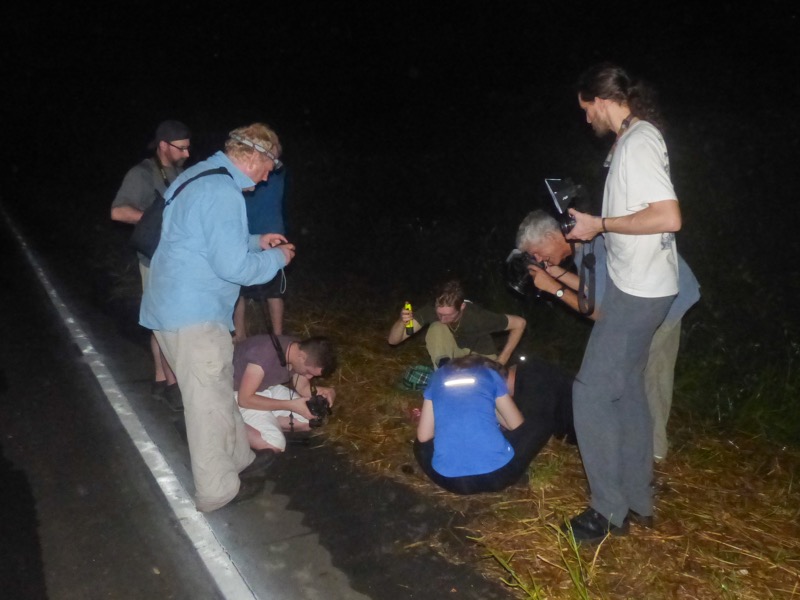 First we tried to get it to pose in the roadside grasses. Photo by Matt Cage. 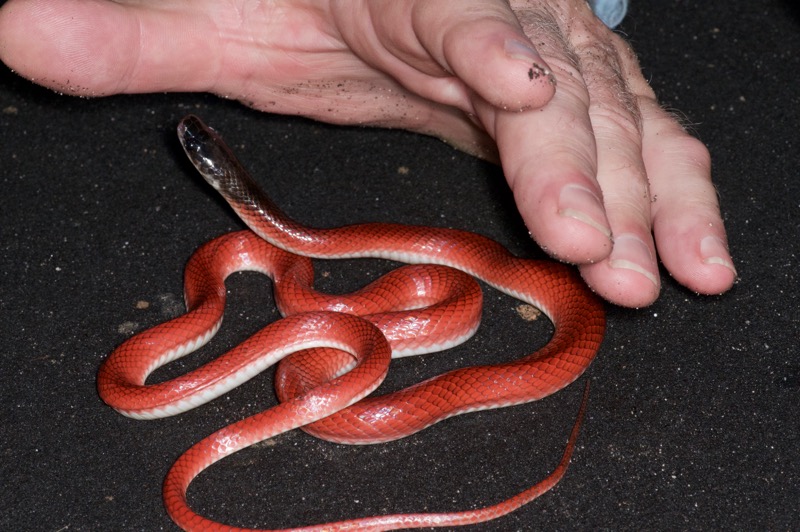 Eventually we gave up on that and tried to get it to pose on the road, which was slightly more successful. I did get a few OK photos of the snake by itself, but this one is my favorite since it best reflects the actual events.

The next morning we said goodbye to this concept of "roads" and headed downriver to our first home away from civilization, Madre Selva Biological Station. That will take me much longer to write up, which is a good thing.

I'm surprised no one has commented yet, an excellent post with some fantastic frogs. The Ranitomeya was my favorite but I'm biased (I study them). Glorious colors in those little fellas. I also like the Engystomops, I recently took a look at the different species of tungara frogs and was surprised to learn of new species I hadn't heard of, some with very limited ranges. Definitely a cool group.
Top

Of course, I'm going to comment! I really need to get back there, 2013 was the trip of a lifetime.
And I can add that the Pseudoboa coronata we found was the single most restless snake I have ever encountered. A beauty though...
Looking forward to the next episode!
Top

I'm going to be going to Iquitos (and on a 3 day ecotour) in July. I hadn't really thought of what to do in Iquitos, but you gave me some ideas!
Top

Antonrskn: Ranitomeya are just amazingly beautiful, and with interesting habits and movements as well. A fine group of frogs to study!

Jeroen: I find that it takes about two weeks between returning from Amazonia and wanting to go back. There are always more species to see.

MonarchzMan: Glad to be of service! You could definitely do worse than to hang out on the zoo grounds by day, and spend time on the Iquitos-Nauta road at night.

Love this! Thanks for posting John! The R. amazonica was great to see, and it's been many years since I've seen one. Luckily, we have lots of other species of dart frogs, but for whatever reason, amazonica are not often seen on our preserves. Your photos are great! My camera was still in drying mode at this point of the trip, so my photos of this day leave some to be desired.
Top

That shot of the amazonica makes me almost bite open a knuckle.

Matt Cage wrote:for whatever reason, amazonica are not often seen on our preserves. 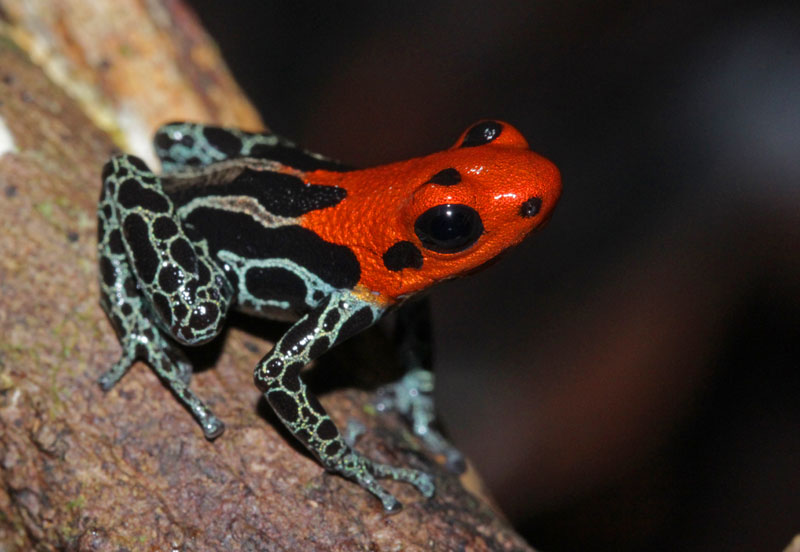 (This reminds that I still owe you some material!)
Top

Sabalillo is the place I do find them. I have not visited Sabalillo in many years. It is a very nice preserve and there have been some great finds there. I hear rumors of amazonica sightings at Santa Cruz, but I have not seen any. Your Sabalillo frog/photo are spectacular.

Take your time for the stuff I asked for, there is no hurry.

Can't wait for your new book to come out!!

Very cool fun on the Ranitomeya amazonica on the zoo grounds. I'm looking forward to seeing the following posts. Thanks for sharing John.
Top

I knew that Poison Dart frogs are only poisonous when they eat their natural prey, and that in captivity they usually lose such toxicity. I also know that the degree of toxicity varies among species, and can also vary depending on age and other conditions.

This photo, however, seems to be of one in the jungle, in a natural setting:
Amazon Dart Frog (Ranitomeya amazonica)

1. How was this man able to touch this frog with no negative effects?
2. Did he experience ANY irritation afterwards?

The amount of poison in the frog varies a lot from species to species. I don't know how poisonous this particular species is, but I know it isn't one of the extremely poisonous ones.

But more importantly, the poison is only a problem if it gets into your system, either by ingestion or into the bloodstream via an open wound or some such.

(That is a photo of my hand, and I experienced no irritation of any kind.)