I spend a lot of my spring/summer nights searching for frogs. Whether it's survey work, research, or just for fun (which it usually is).
Where I'm based, in KwaZulu-Natal, we have plenty to look for, as it is the most species-rich province in South Africa.
Of course, one sees a whole lot more than 'just' frogs, such as snakes, spiders, chameleons and more.
Fortunately, after a long drought, we've been having some decent rainfall, which has spiked frog activity!

Below are some photos that I have taken of some of the species that I've seen so far, this spring.
Starting off with the highlights for me...

Long-toed Tree Frog (Leptopelis xenodactylus).
This Endangered species is restricted to the KZN Midlands. I had the privilege of seeing them last season, but going back to see them again was just as exciting as the first time- they're just so loveable!

Rythmic Caco (Cacosternum rythmum)
A recently described species which I've wanted to find for a while now. They favour flooded grasslands/pans, and with it being about 1cm in size, it is extremely difficult to find! My friends and I found a couple in the rain one night, but because I was worried about the wellbeing of my camera, I only photographed one specimen, a pretty one at that!

Spotted Shovel-nosed Frog (Hemisus guttatus)
A fossorial species listed as Vulnerable. They are such bizarre-looking, yet very cute frogs!

They use that hard, pointed nose for digging.

Kloof Frog (Natalobatrachus bonebergi)
An Endangered species, which has always fascinated me. I've studied them a bit in the past few years, and spent a lot of time looking for them. Their breeding season lasts a lot longer than most other species, breeding from August to June.
I've been on a bit of a personal research mission this season, searching for new localities for this species in the Greater Durban Area. We've managed to find 4 new localities in a month!

Pickersgill's Reed Frog (Hyperolius pickersgilli)
A Critically Endangered species (may be listed down to Endangered) found in wetlands along the coastline of KwaZulu-Natal. 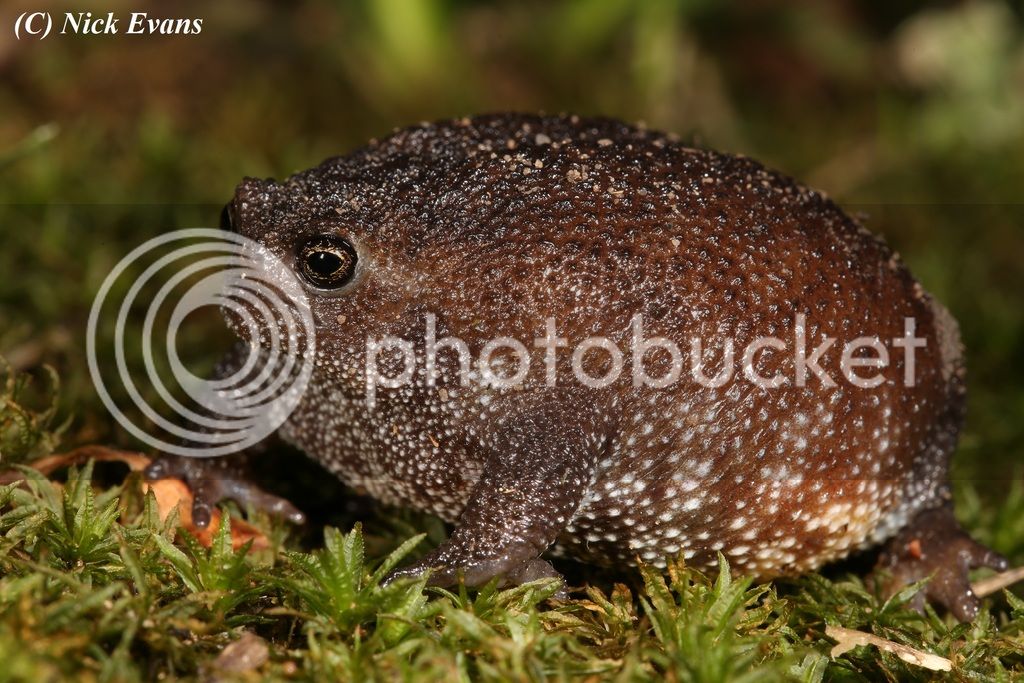 Natal Tree Frog (Leptopelis natalensis)
A firm favourite amongst the general public with a heart for frogs.

Natal Sand Frog (Tomopterna natalensis)
Don't see many with this light grey colouration. They're normally a lot darker, or sometimes even quite red.

That's all for now. I'll post some more pics later on in the season

Great stuff! Love the shovel-nosed frog, and that plaintive rain frog looks like you Photoshopped a grumpy old man's face onto a toadstool or something. Excellent.
Top

Great post! Wonderful photography and insane diversity. That Hemisus guttatus is such an odd thing, why is it spotted if it is obviously built for a fossorial lifestyle? Are they surface active much? Every time I see a Breviceps it blows my mind that they exist, their morphology must make everything but sitting and waiting more difficult. Very jealous of this post (and Tyrone's), thanks for sharing.
Best,
Nick
Top

Thanks guys, appreciate the supportive comments!

@NACairn's yeah the Hemisus is a fossorial species which emerges after heavy rains.
Top

numpty wrote:Great stuff! Love the shovel-nosed frog, and that plaintive rain frog looks like you Photoshopped a grumpy old man's face onto a toadstool or something. Excellent.

Nick, you live in friggin' paradise! Stunning photos of some really bizarre frogs. Did anyone else think that first pic of the Long-toed Tree Frog just screamed "Kermit" ?! And the Kloof Frogs must all be totally exhausted, what with only one month a year free from breeding

. The Spotted Shovel-nosed Frog may just be the most bizarre looking critter I've seen! Love your pics of animals from KZN, keep it up!