In a nutshell, I was just wondering if anyone had the definitive word on the crocs that live in the Huai Lam Takhong River between the Pha Kluai Mai Waterfall and Haew Suwat Waterfall in Khao Yai National Park in Thailand. (For anyone wanting to skip the following babble, there are some photos at the end. Nothing special though.)

I first went on this walk back in ... oh, 2010 I think. I noticed, and dismissed, the signs stating "beware of crocodile" posted at three spots - one nearer the Pha Kluai Mai Falls at the western end of the trail and two nearer the Haew Suwat Falls in the east. Even in the days before I got into herps I knew the native species was Crocodylus siamensis, which was extemely unlikely to inhabit this park. I assumed it was a mistaken translation for a water monitor. I went back a year later and was told that there were two crocs in the river, probably introduced, though the rangers I spoke to said they didn't know by whom. A couple of years later, in 2013, I visited again and was told there was only one croc left. I almost, I think, saw it at the easternmost spot, closest to Haew Suwat Falls. Coming round a bend I spotted what I thought was a head in the water, but as I fumbled with my camera it sank out of sight. Before it could reappear I was chased off by a bull elephant heading in my direction along the same trail. Bummer, I suppose.

Earlier this year I visited the park for a day. It seemed like lots of people had seen the croc the day before at the eastern area, and on the trail the next day I finally had success. At the westernmost spot though, separated by a couple of kilometres of long, shallow, rocky stretches from where the sightings had been the day before. I was able to watch it for an hour or so, taking my usual crummy photos. I'm no croc expert, but this had to be a different individual from the one described the day before.

Later, I asked some rangers about the croc I'd seen. One stated again that there was only a single croc in the river, but another said there were two.

So, what's going on here? Looking into it, years ago - back at least to 2008 if the Internet's to be believed - there were reports of two crocs in the river. In 2012-13, there was apparently only one croc left, and according to a report in the Bangkok Post it was at the Pha Kluai Mai Waterfall. The stated intention of the park authorities at this time was to capture it. It seems that didn't happen, though it's hard to imagine a dedicated attempt - involving divers, no less - failing to yield a result. In 2014, reports - including interviews with the park director, repeated that there was only one croc, now described as living near Haew Suwat Waterfall, and it had grown to a large enough size to be dangerous. It was said to be most likely a siamensis/porosus hybrid.

The second croc seemed to disappear for a few years. Guides and rangers who stood to gain from sightings would surely have had tabs on it if it were still there. Did it die? Well, now the "second" croc's back again, though not even all the rangers seem to be aware of the fact. The animal I watched didn't show many signs of nervousness, and even swam over right beneath where I was standing.

Anyway, I guess I'm hinting not very subtly at the possibility of fishy business, but I've no real way of knowing the exact nature or extent of the fishiness. I just wondered if anyone might have an inside line or some insight into all this.

Anyway, having achieved my goal of seeing a croc in Khao Yai, I did worry that my life might be rendered rather meaningless after the successful completion of such a lengthy quest. I've found other stuff to do though, so that's good. 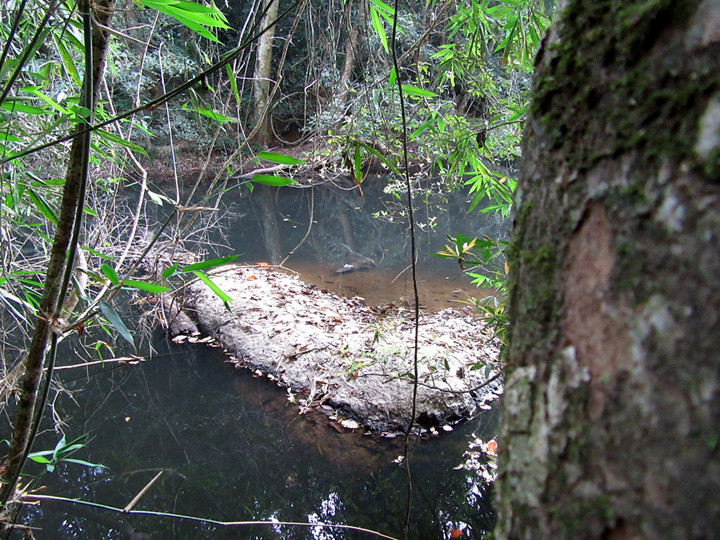 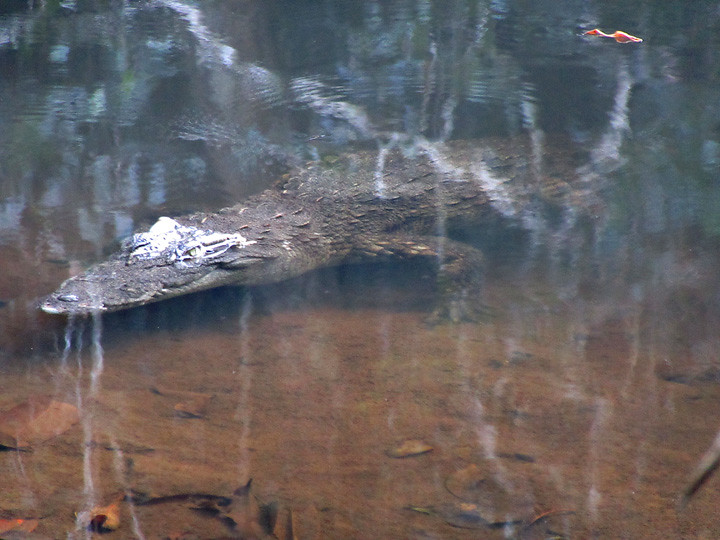 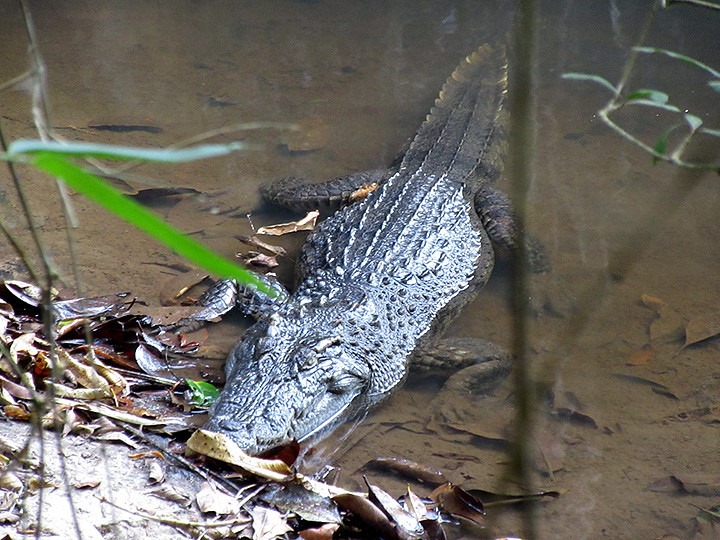 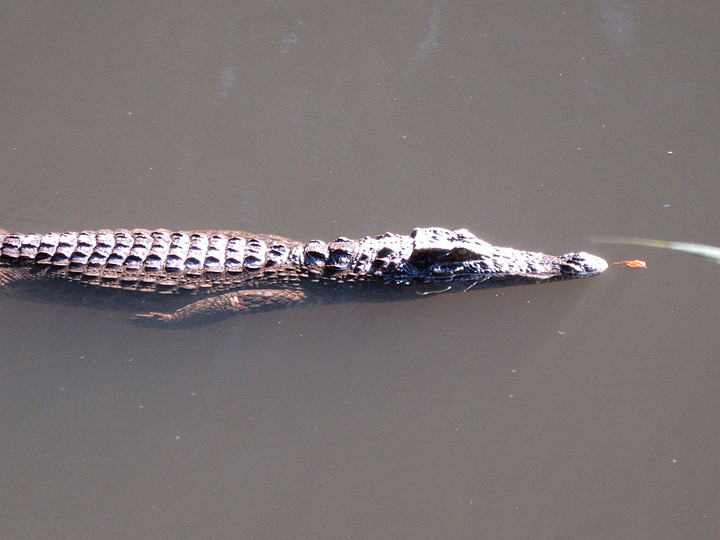 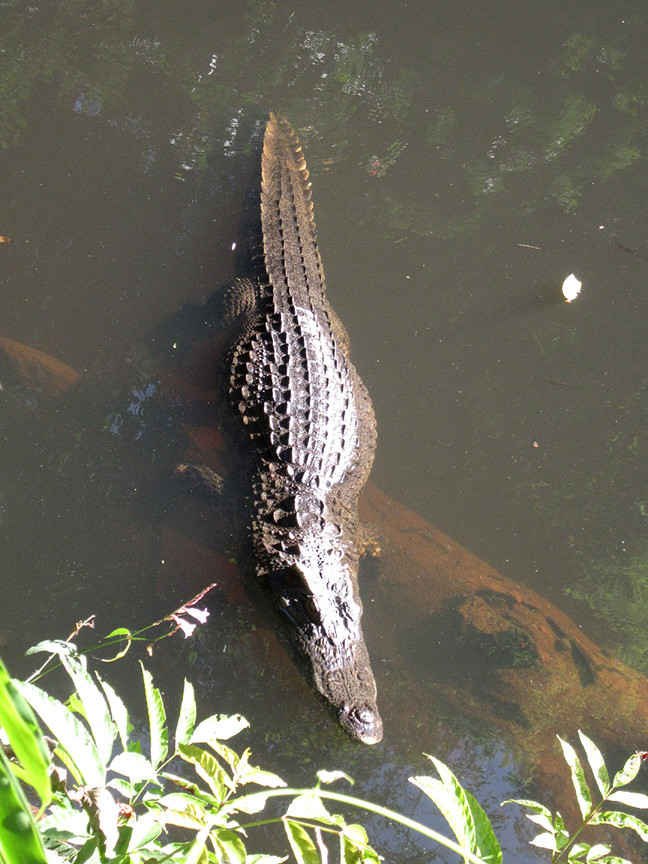 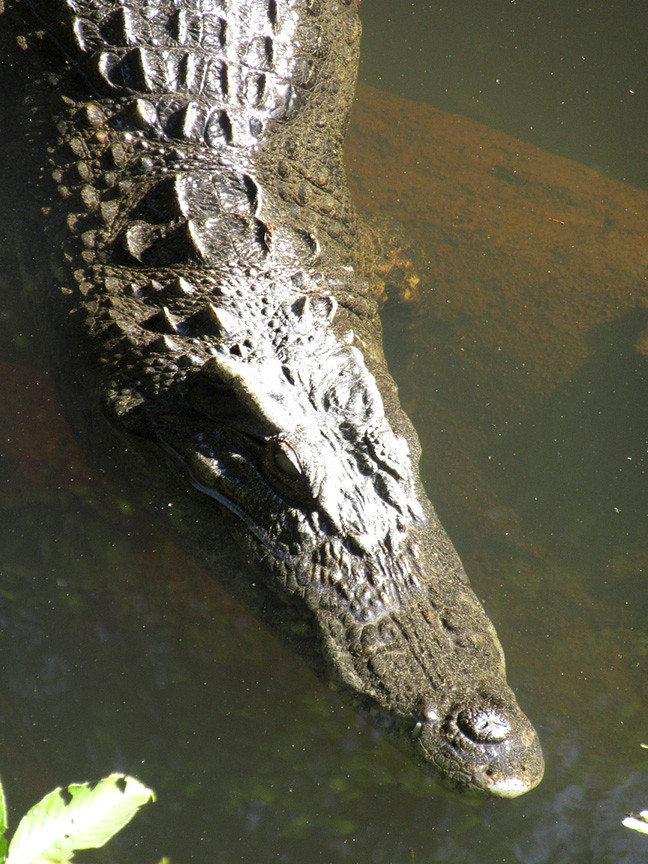 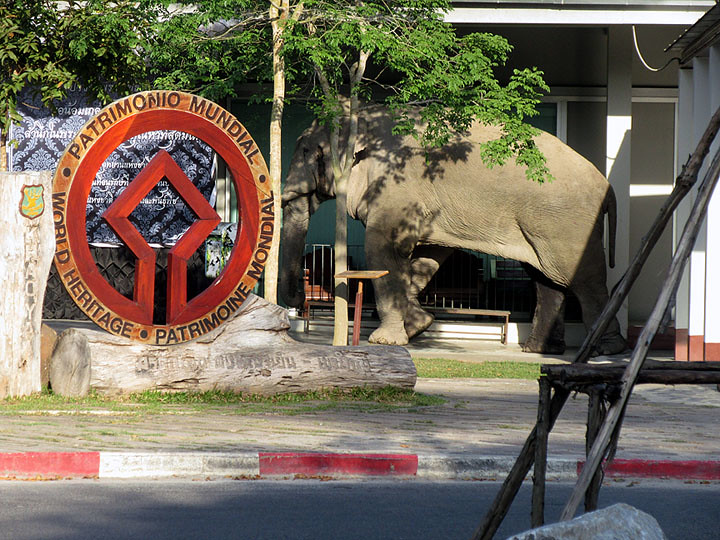 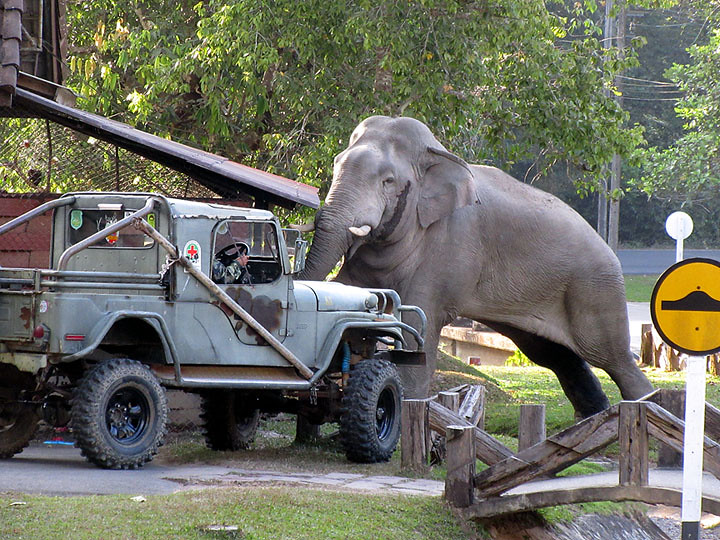 Also a bunch of water monitors in Lumpini Park. Apparently lots of these were captured late last year, but I can't imagine how many more you could fit into these waterways. They're everywhere. 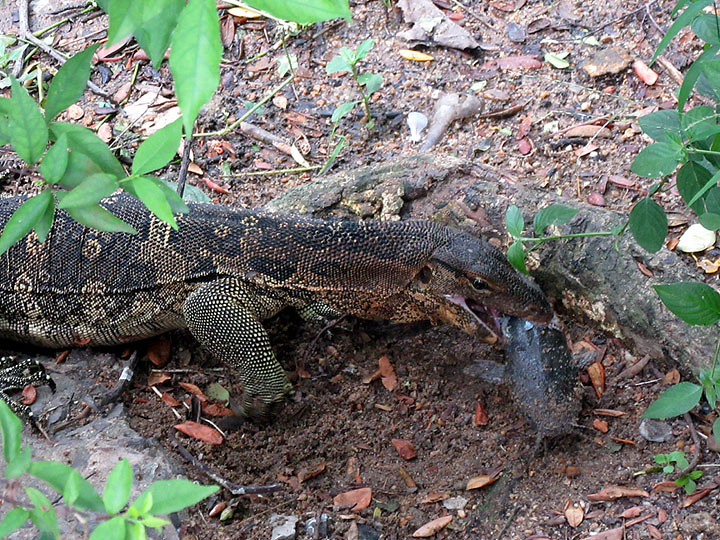 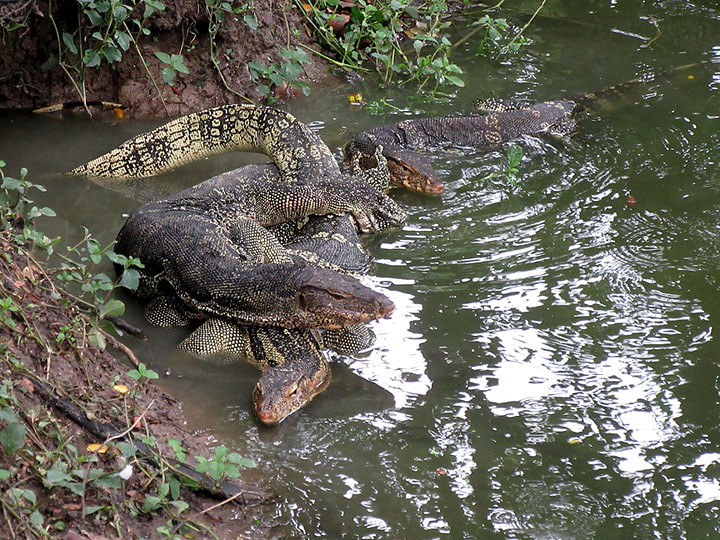 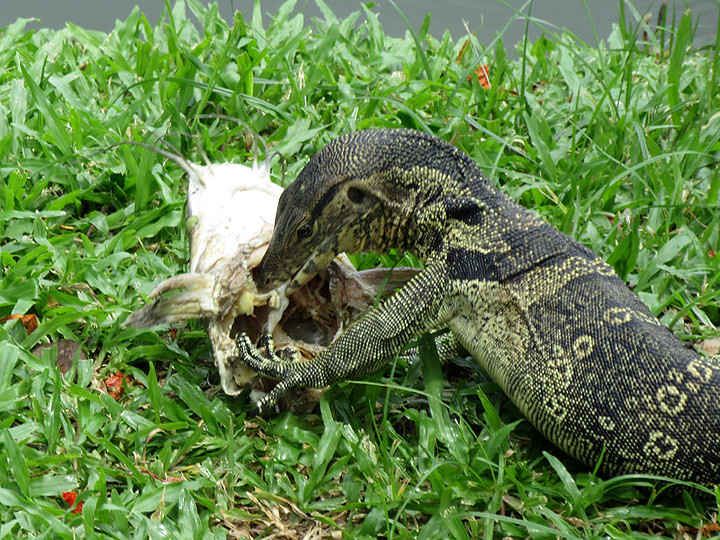 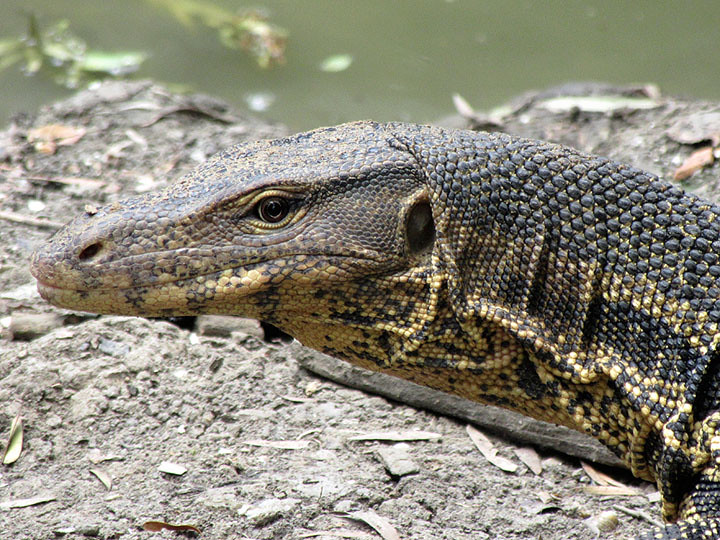 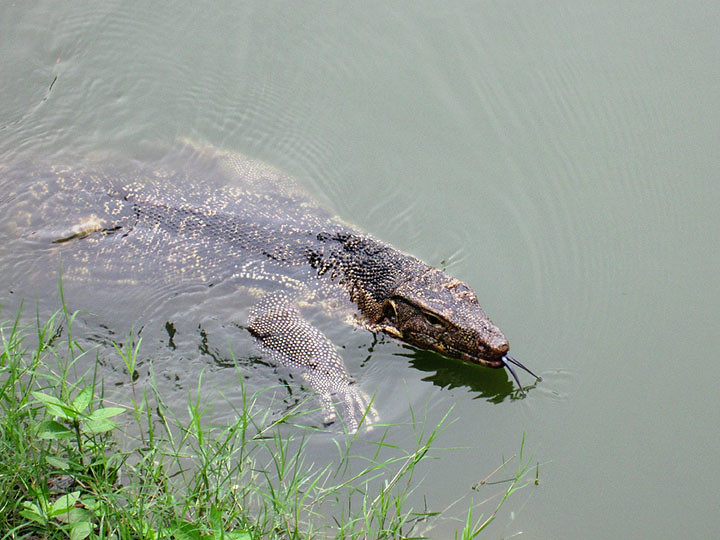 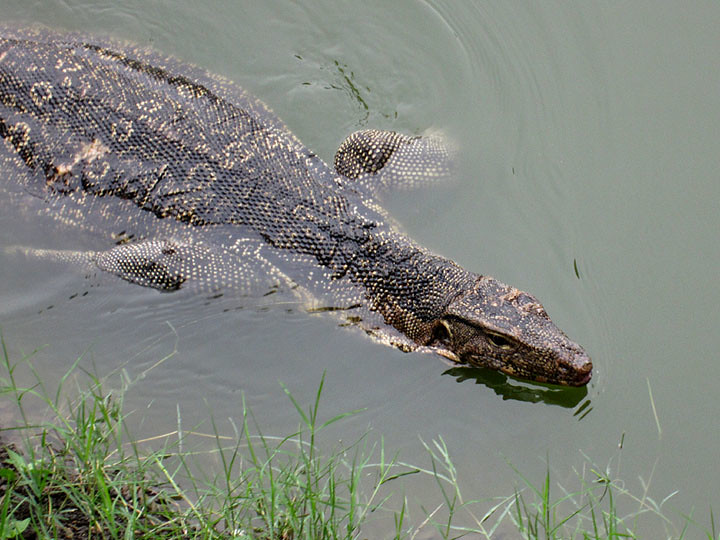 Re: Crocs in Khao Yai, Thailand