This skink was found in central riverside county while flipping for rosies.
I can never tell for sure what the rules are regarding the striping in the tail to determine if they're Skilton's or Gilbert's. Also the tail had the slightest pink tinge that doesn't show up on the picture.
Thoughts anyone? 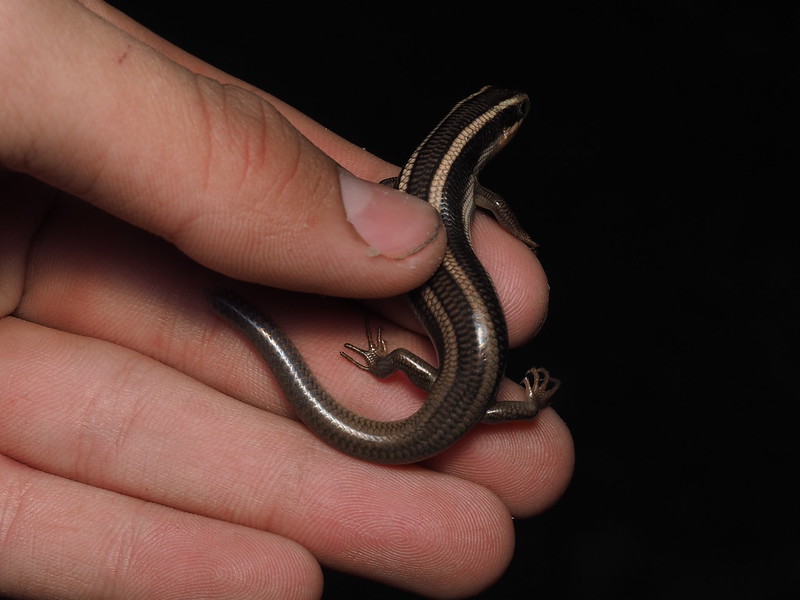 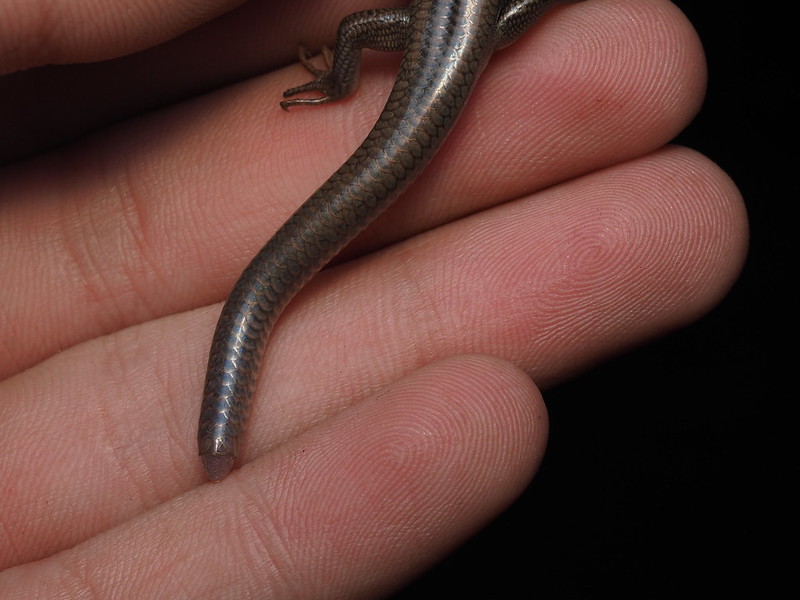 To me it looks like the Gilberts skink in Ca. Herps at:

This is a Skilton's from Anza in Riverside Co. same site:

I'm tending to agree with you...
Top

I need a shot of the tail from the side to be able to ID. You didn't get a side shot? That's where I can see if the striping is extending or not.

To me the gestalt looks more like a Western, but I've been fooled by gestalt on skinks before. Really can't tell personally without a side shot of the tail.
Top

I was feeling western too at first glance. That side photo is vital...

There is no other field herping topic I dislike more than this one...

which is why I didn't want to comment on it when I first saw it. But now insightful aspects to share...All the skinks in my area are definitely mr. Greys (Calherps range maps reference). At first I had some ID-ed as skilton. Then was told all the skinks in my area where Gilbert's. So I went in and changed them all to Northern Browns in my Flickr photo album. Then realize they could be integrates. So, I changed all of them to western skink titles, thinking I was leaving it broad and open but still accurate. Like saying fence lizard or western pond turtle... now I'm reading that skilton's are actually also called, "western skinks"

I probably live in one of the most complex areas for ID-$ing these little guys. Right on the borders of Placer, El Dorado, Sutter counties to Sac county.

I look at that diagram posted above and in most cases I found skinks that had lateral and dorsal stripes only extending half the distance onto the tail, of what's displayed fpr skiltons in the diagram above...or the lateral stripes extended out twice as far than the short dorsal... But I have never seen a skink that has a lateral stripe as short as the diagram picture nor have I seen a skink that has dorsal and lateral stripes extending as long out onto the tail as the diagram picture. Assuming the diagram is accurate in proportion to the leg length. Having said that, here's a fresh spring baby from Placer County in Roseville that I'm pretty damn sure the lateral Stripes extended out past the dorsal but I don't have a picture anymore to the display that. I think I would have to find and capture a male and female of both Gilbert and Skilton, raise them in separate enclosures from birth, and observe the degree of fading as they age because when considering that aspect as a determining factor, it's damn near impossible to ID these things and boggles my mind up to no end. I give myself a headache trying to figure that out

And mr. Gray was a dreamcatcher reference definitely not a 50 Shades of Grey reference

bit yeah, the struggle is real

Don't read too much into that, anyone and everyone... that's just my quirky way of saying I think it's an integrad

Also, went through and corrected all the txt mic errors. Should be legible now
Top

Ok, so I realized you can kinda see it. Heres a crop close-up. The shadow cast is on the bottom of the penny and the tail is slightly twisted, showing a half more tail scale width on the top /right side than shown on bottom/left side. So definitely not a shadow. If you look at the top edge / right side of the tail, there is strong black outline coloration extending 8 scale rows past the finger/toe. I can count 12 scale rows that show the black coloration (fading as you get further down the tail) starting from the scale row containing the black dorsal spot/blotch... Intergrade, new sub-species, mutant, variation-ness, morph-arama-nous...

Either way, that dark brown coloration on Nick's skink is awesome

looks delta-ish. Coolest looking skink I've seen come out of CA. When I originally saw the post, I was like wow look at that chocolate skink

Unfortunately those are the only shots I have. I think it's most likely a skilton's because I have seen countless there before. That's not to say it can't be a gilbert's though. I'll be sure to get that side shot in any future case.
Thanks for the input!
Nicholas
Top

I suspect that is Skilton's Skink. Any large ones retain that pattern, or do large all look like below?

I have nothing to add other than that Dreamcatcher the book and movie are fantastic.
Top
Post Reply
12 posts • Page 1 of 1