In mid-May, with coronavirus-related restrictions eased in Missouri and Tennessee, we headed across Old Man River into Tennessee to visit Bethany’s family. As we set out from SW Missouri, the hills were shrouded in darkness, with dawn breaking an hour into the drive. On our trek eastward, we made a small detour into the remote eastern portion of the Missouri Ozarks to take a shot at the Red River Mudpuppy, endemic to the streams and rivers of our region, and distinguished from its more common northerly cousin, the Common Mudpuppy, by a uniform tan background color, spots on its back, and a white or pinkish plain stripe on the belly.

After pumping gas with plastic gloves, we continued on in the morning fog into the shrouded hills, past quit small towns, some with well-kept houses, others desperate-looking. We pulled off the road just before the stream and walked down to the water, net, cameras, and bucket in hand. Despite the calendar reading May 10, it was barely 40 degrees that morning when we first entered the stream and began flipping some large, flat rocks. As with many streams in the MO Ozarks, this one was unbelievably clear, so clear that it was difficult to judge the depth of the water before taking a step. Several times, we stepped in water deeper than our boots (about 18” or so) and felt the icy waters fill our soles. At first, this was unbearable, bout our bodies adjusted quickly, and we began wading through the water seamlessly, flipping more rocks.

After meeting a couple hikers who lived adjacent the stream and flipping at least 50 rocks, we called it quits and headed for Tennessee. Passing through Poplar Bluff, the trees and rugged bluffs of the Ozarks gave way to the flat, row-crop agriculture of the “bootheel.” Crossing the Mississippi River into West Tennessee and driving through the Northwest quadrant of the state, I remarked to Bethany that it didn’t look much like Tennessee—flat, swampy, piney, with agriculture everywhere. Not until Jackson, TN did the scenery look more like the Volunteer State. Running ahead of schedule and happy to be back East, we charted a rural course to middle Tennessee, driving past rustic cabins and briefly traversing a section of the Natchez Trace Parkway. This is where we noticed that we were back in the land of tall trees. People here in Missouri are used to calling wooded areas with canopies only 20-35 feet high “forests,” but in my view, our state does not really have forests. Where I grew up in Michigan, even the second-growth woods were 60-80’ high, and the same is true in most of the Eastern US. Just off the parkway exit ramp, at a rest stop where we called Bethany’s family to inform them of our location, stood a cluster of towering ash trees. What a welcome sight!

We had a blast visiting Bethany’s family, friends, and recreating around Tennessee and Alabama, getting a glimpse of the Georgia Blue Ridge again just east of Chattanooga, but herpetologically, only two episodes of note took place. First, we struck out on an attempt to find the Brown-back Salamander, Eurycea aquatica, which is more of a winter/early spring species according to the literature, but at least the effort took us to some pretty springs, probably my favorite microhabitat, in Georgia and Tennessee. Secondly, Bethany organized a hike of one her favorite childhood herping locales, where three of her siblings and several friends came along for some creek-and-woods herping. This was refreshing for me in a way. It was herping without goal, without pressure. No lifers were even possible, but the point was again to simply have fun turning up duskies, two-lineds, and so forth. Suffering from allergies, I lagged the pack at a few points and found myself flipping rocks in the stream ravine through bleary, clouded eyes, finding occasional Desmognathus conanti and E. cirrigera. In a narrow rock canyon where the creek water pooled to several feet deep at the bottom, one of Bethany’s friends and I observed Slimy Salamander on the ravine wall before we headed to a different spot. There, under rocks around a post, we flipped a Mississippi Ring-neck snake (the trip’s only lifer for me) and a huge, adult Northern Red Salamander. Several of Bethany’s friends had never seen this species, and seeing the strawberry red, hulking critter in those fragrant Tennessee woods epitomized what I miss about the East all in one moment: the salamanders of my youthful adventures, the hills of Appalachia, familiar trees and foliage, the smell of the woods, family. 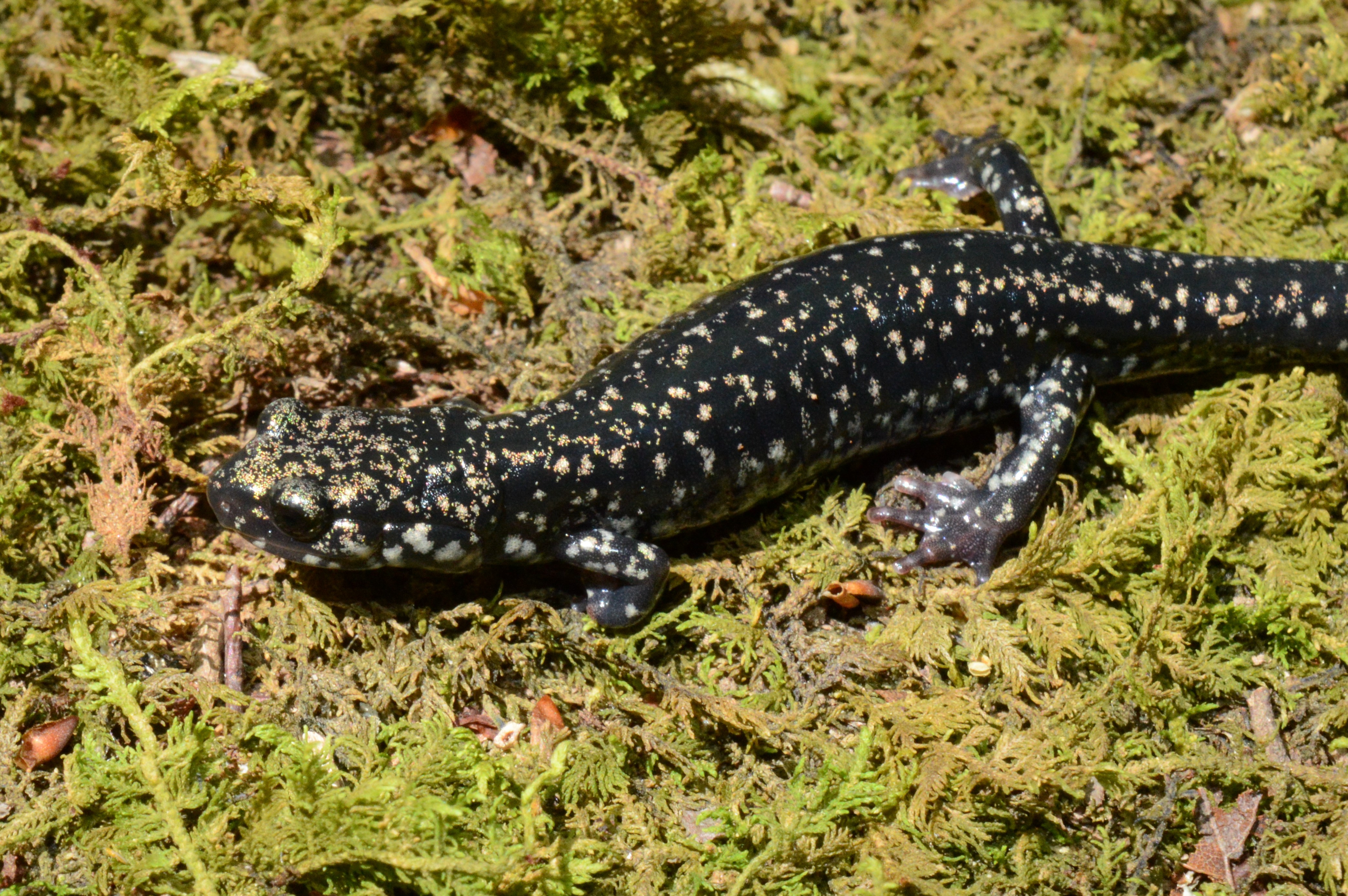 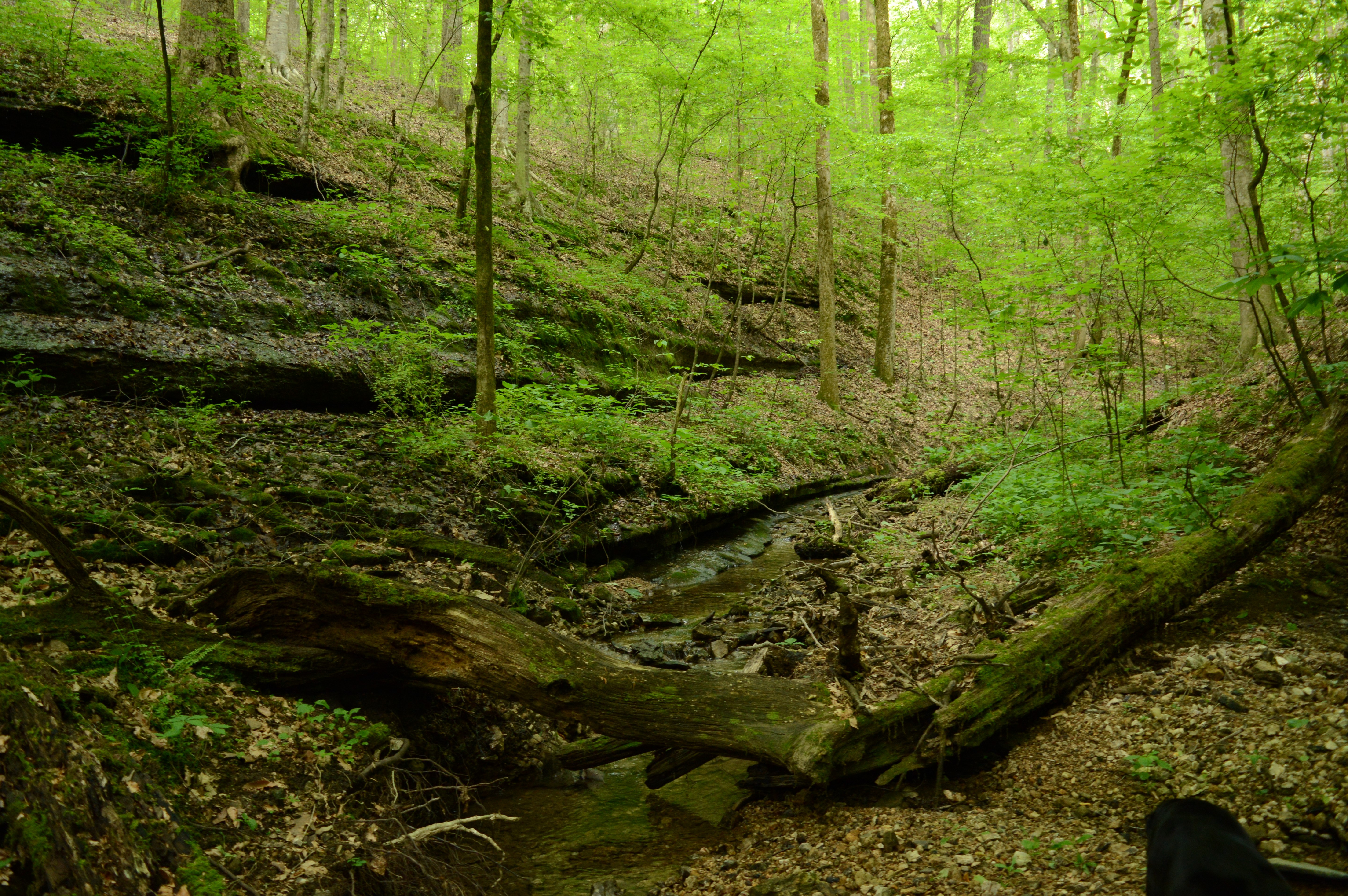 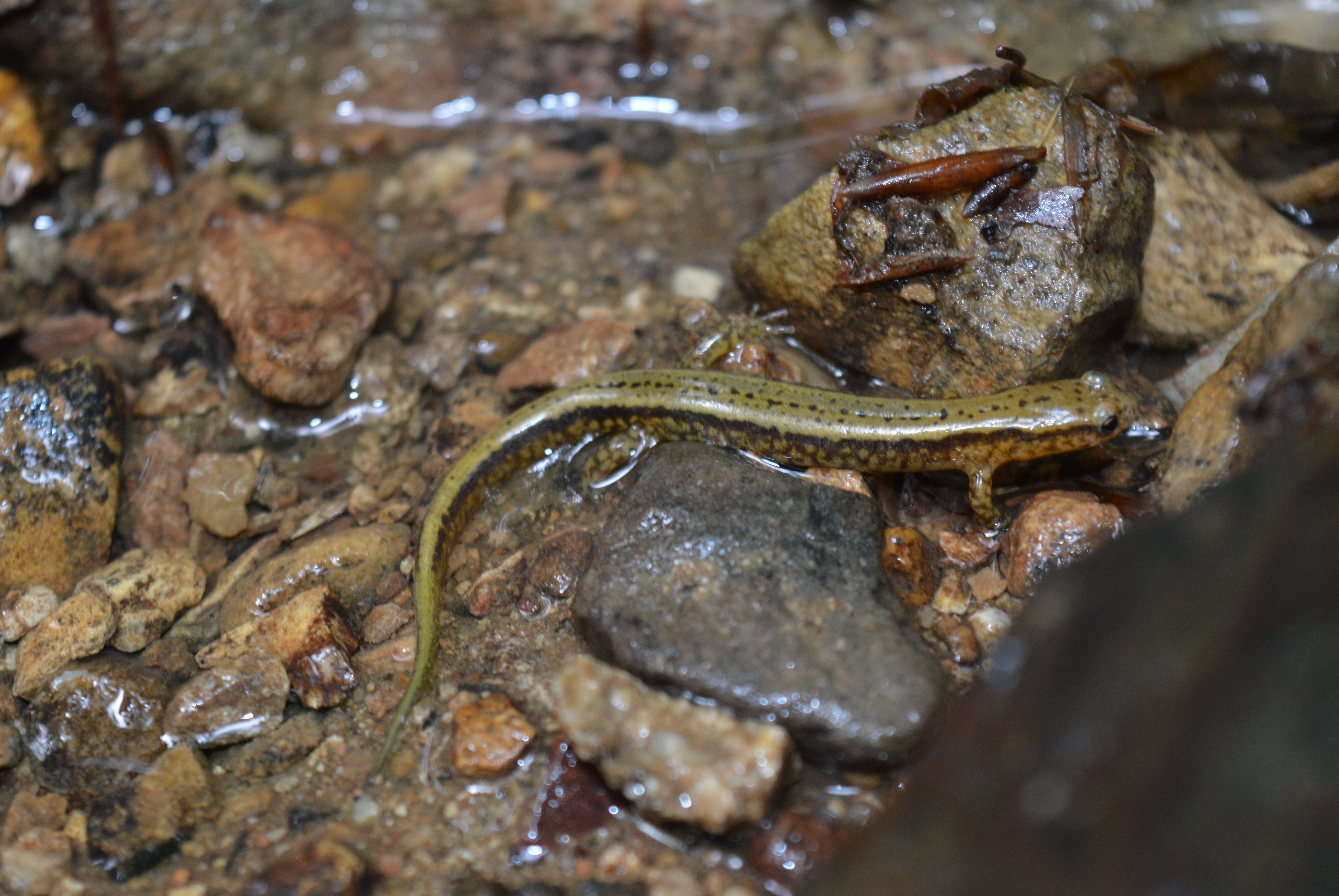 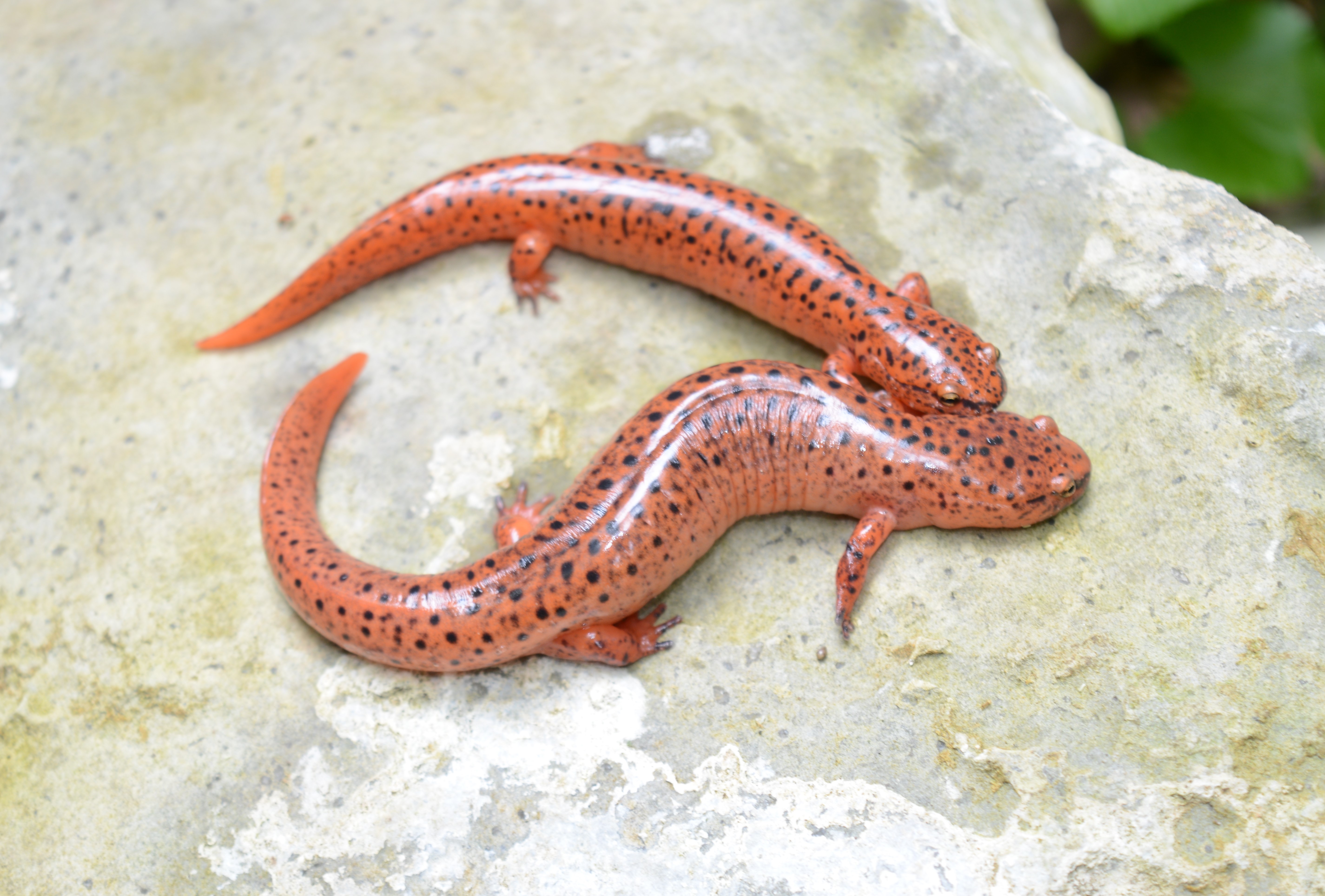 After sufficiently visiting with Bethany’s parents and siblings for several days, having some BBQ, learning the “Watermelon Crawl” and playing gin rummy in the process, we headed back for Missouri. On the way, we stopped in the Bootheel to try for a Siren or Amphiuma, but came up empty after an hour and a half of shining, seeing only a Watersnake and a few Bullfrogs.

Our next outing came two weeks later in the Missouri prairie to our west. My research and a hunch had revealed a locale less than 45 minutes from us that might harbor Bullsnakes, where we had previously seen ratsnakes and a nifty Osage Copperhead. Bullsnakes, to me at least, are the herp symbol of the Heartland. We crossed a small creek with some leopard frogs, and Bethany and I alternated walking in the recently-cut prairies and on the trail, one person basically road cruising on foot and the other trying to scare something up. After nearly an hour, we came to a tangled brush pile on our left astride a cattle pasture, and with the sun still out and temperatures nearing 85, I had a strong hunch. “This is where we find one,” I told Bethany. Sure enough, three or four steps in, I spied a GIGANTIC Bullsnake laying in the grass, and as we locked eyes, it bolted toward the brush pile, but I was able to slow it down and get in its way before it could escape. I’ll admit—I am usually not skittish to grab snakes whatsoever, but the hissing noise that this monster Bullsnake made scared me, triggered some primal fear that no amount of conscious thought can repress. Bethany and I wrangled the snake, trying to get it out of the edge of the brush, for several minutes, before Bethany grabbed the snake and removed it to the trail, where we had to corner the snake Steve Irwin-style to keep it from bolting again. Finally, we got ample pictures and video and stood back to admire the snake in awe. 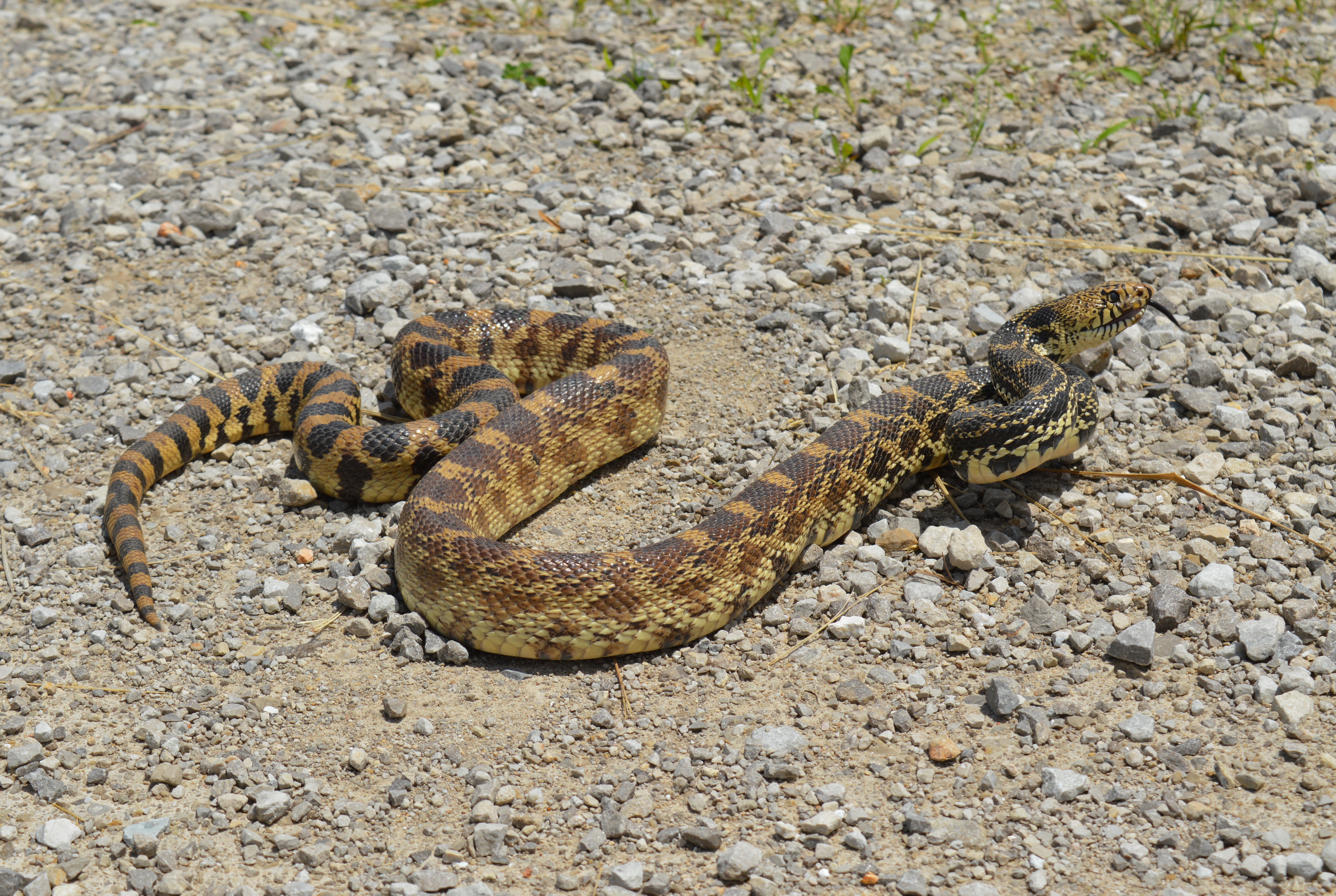 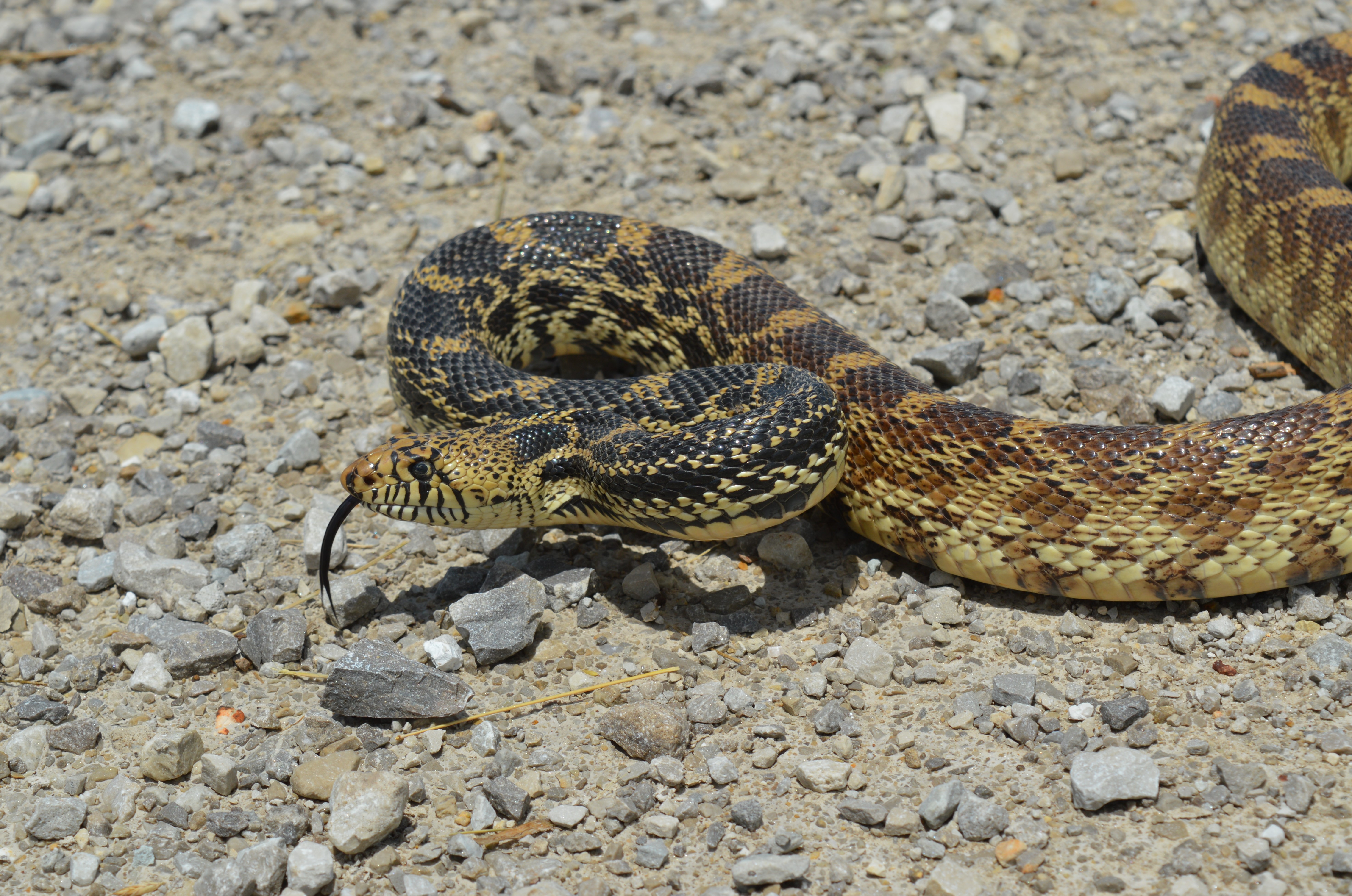 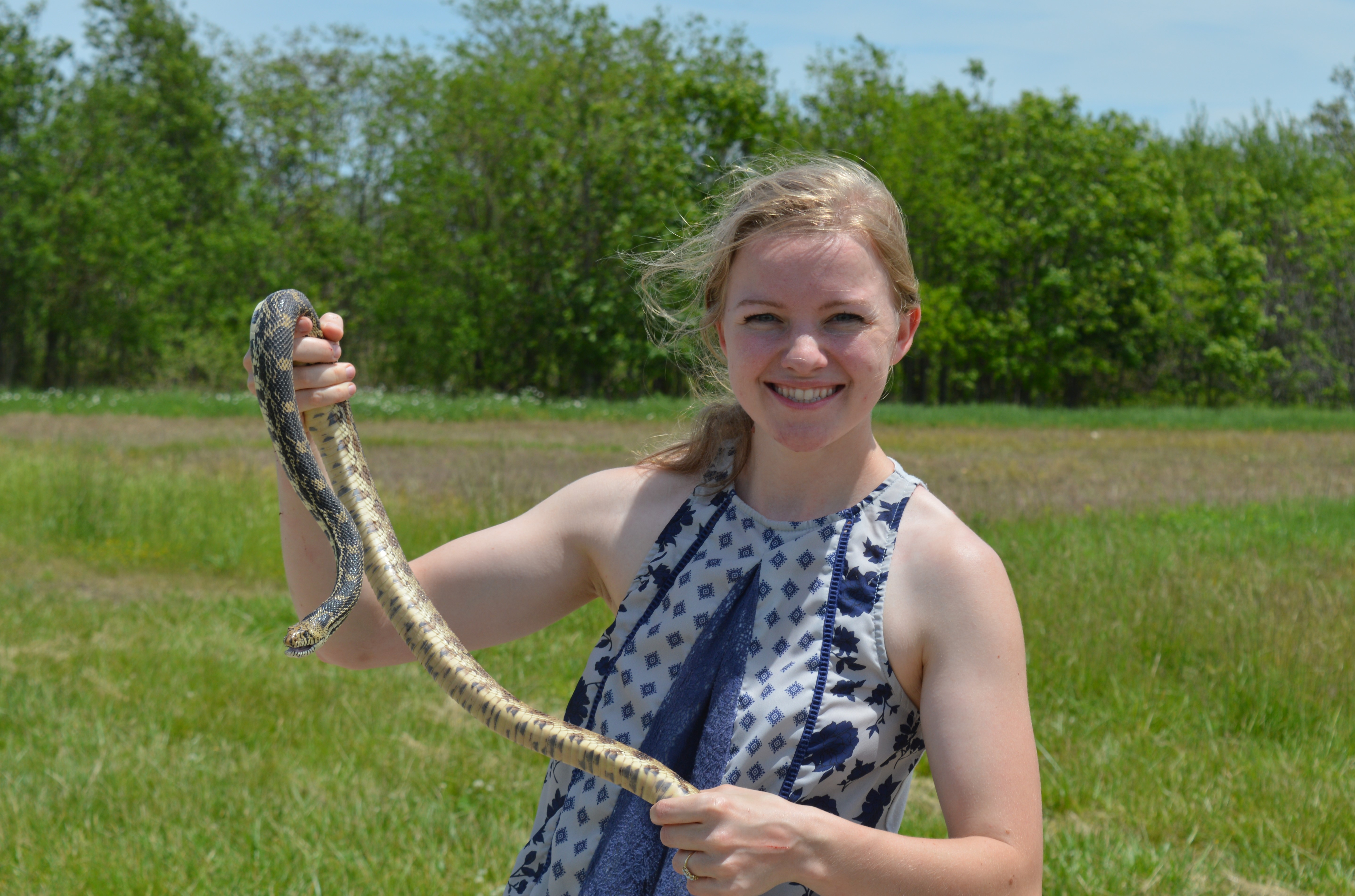 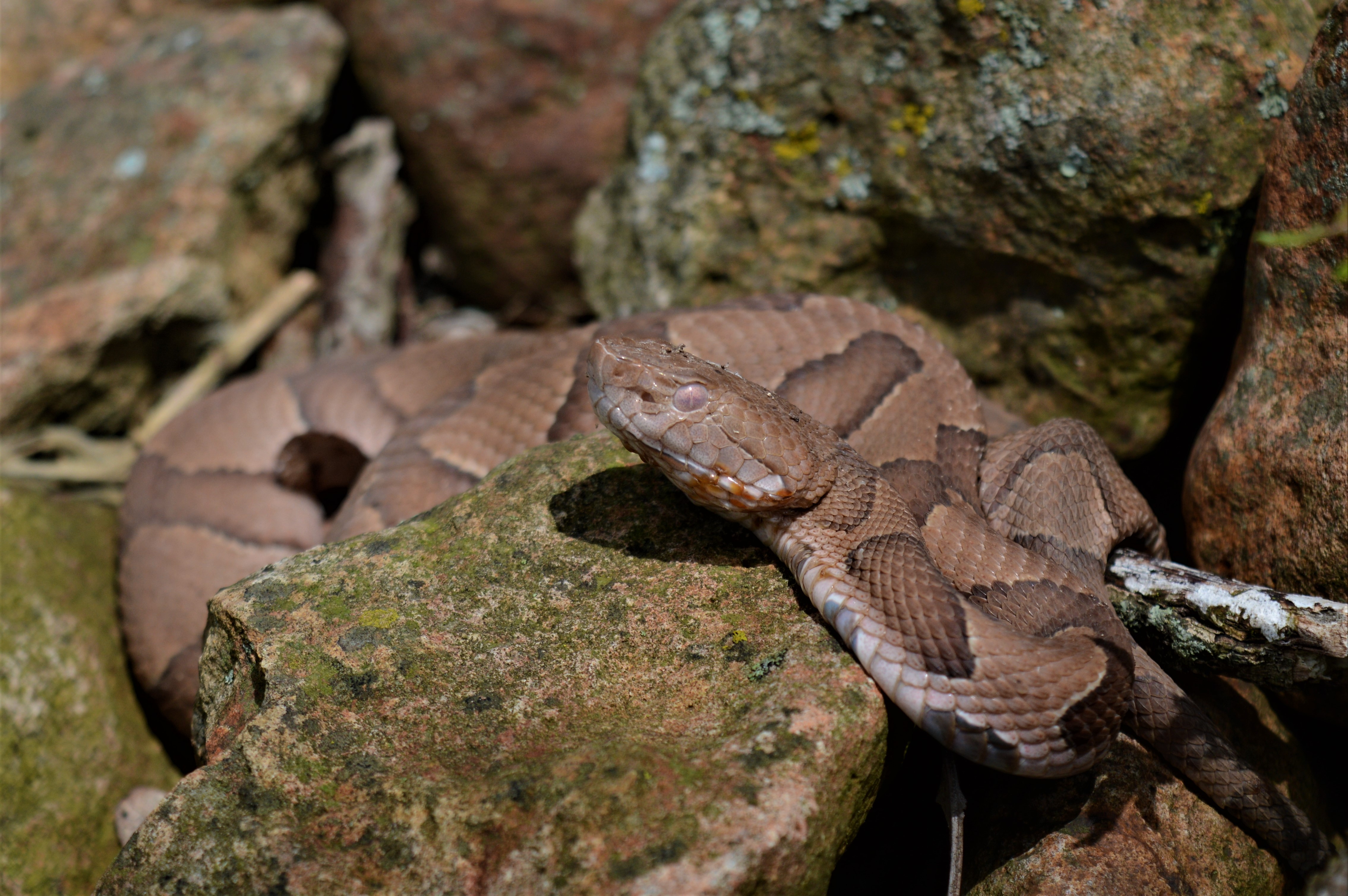 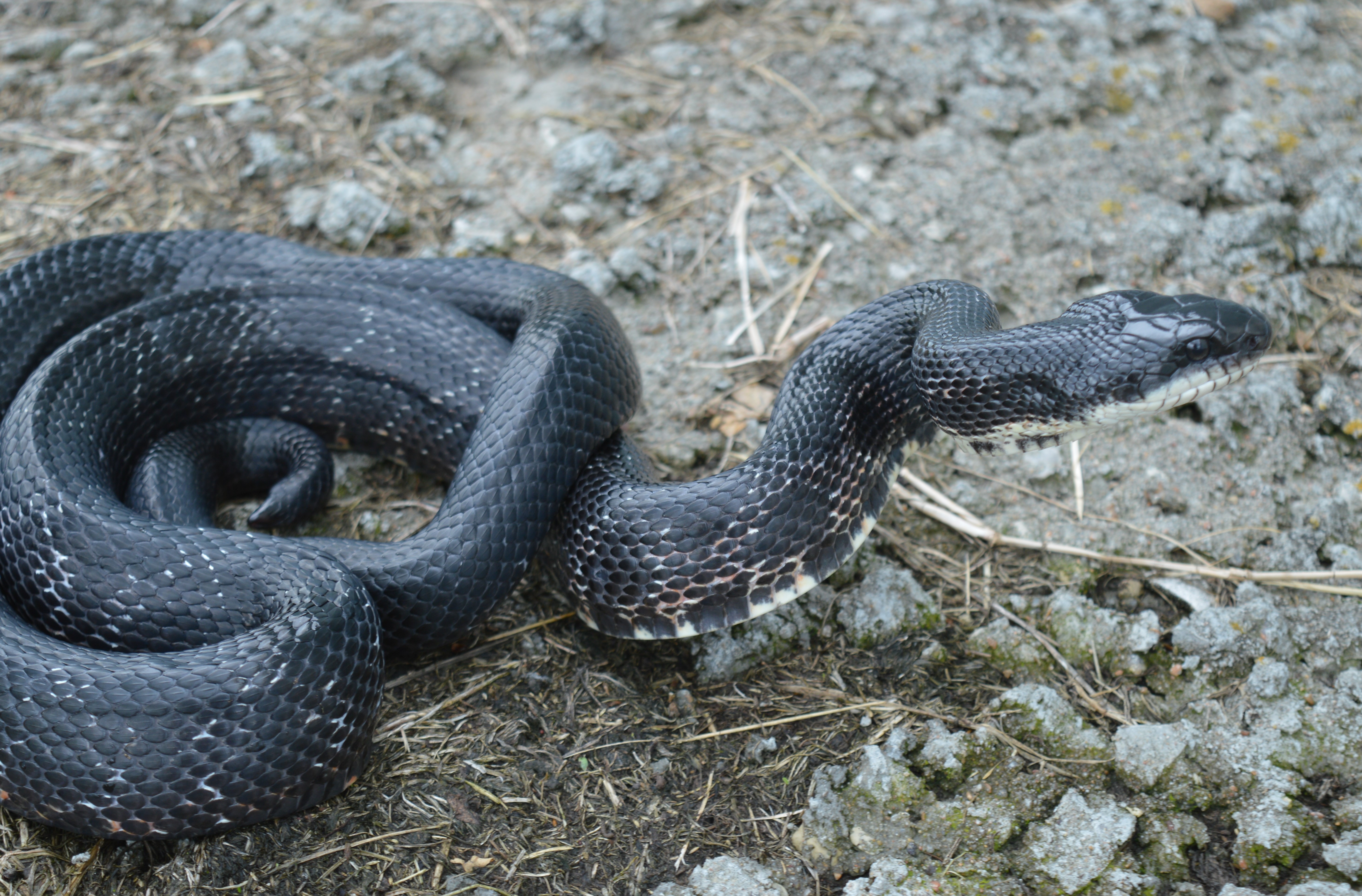 Bethany asked if we should move the hulking serpent back to the brush pile 20 feet away. I said, “I think he can get there without our help….” I didn’t want to pick that snake up a second time! With my allergies killing me by then, we returned to the car and headed deeper into the prairies.

Further west near the Kansas border, we cruised a musk turtle in short order and admired the myriad wildflowers blooming out on the range as we made loops around a productive native prairie area. We saw several racers, but these were much too fast to catch and were extremely wary of the car, moving as soon as I could see them at the roadside, usually at least 30-40 yards ahead. On a small side road, we spied a longer, slower snake. Bethany jumped out and ran up to it, then jumped up and down shouting, “Prairie King!” Awesome—the day’s second lifer. I’ve heard that these snakes, along with the whole Lampropeltis genus, are strongly correlated with recent or coming rainfall, and perhaps the thunderstorm the night before had these guys moving around so much on an otherwise hot, humid, generally miserable day. This specimen was near-impossible to photograph, but we made do and headed back home, starving and with two magnificent snake lifers under our belt. 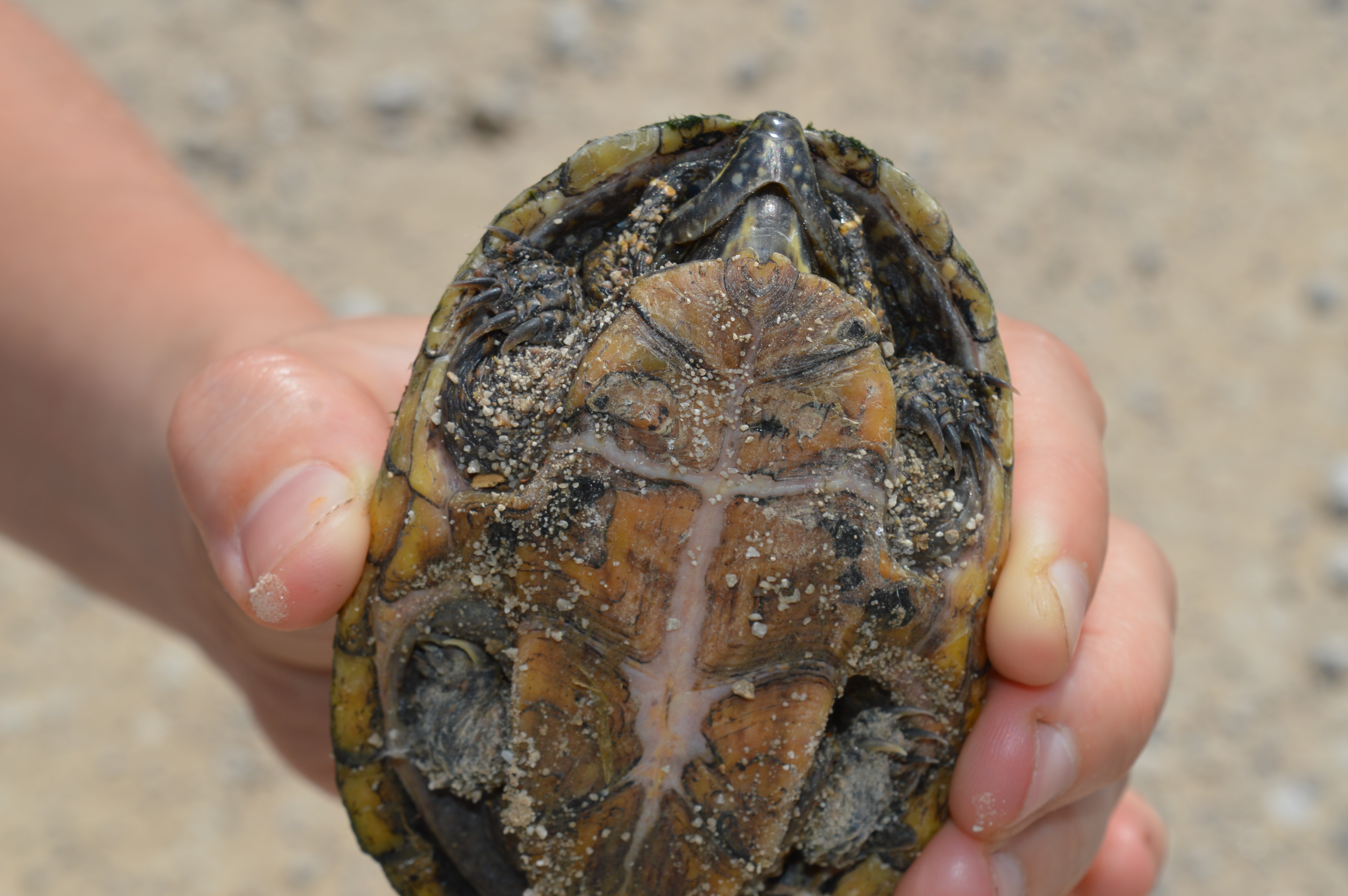 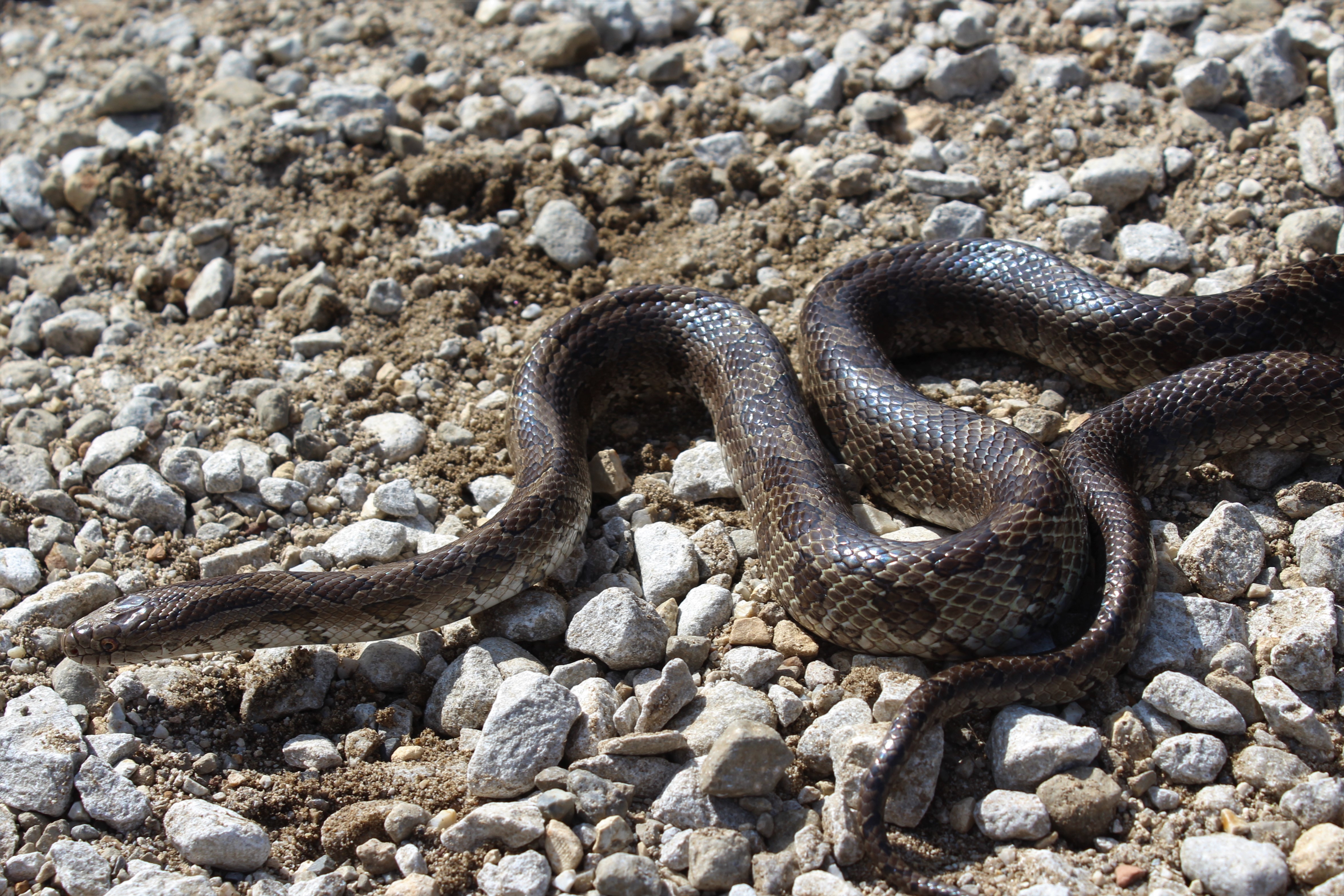 On our anniversary, before eating out for dinner like a normal couple, we did some hiking and herping beforehand, seeing a few watersnakes near a popular trout-fishing spring in our neck of the woods and a few assorted reptiles on the road after an afternoon rain, including a Red-eared slider in the ditch, a few DOR ratsnakes, and a smooth green snake crossing a sandy road. At the end of May, temperatures began soaring, and our herping activity slowed down to a crawl. 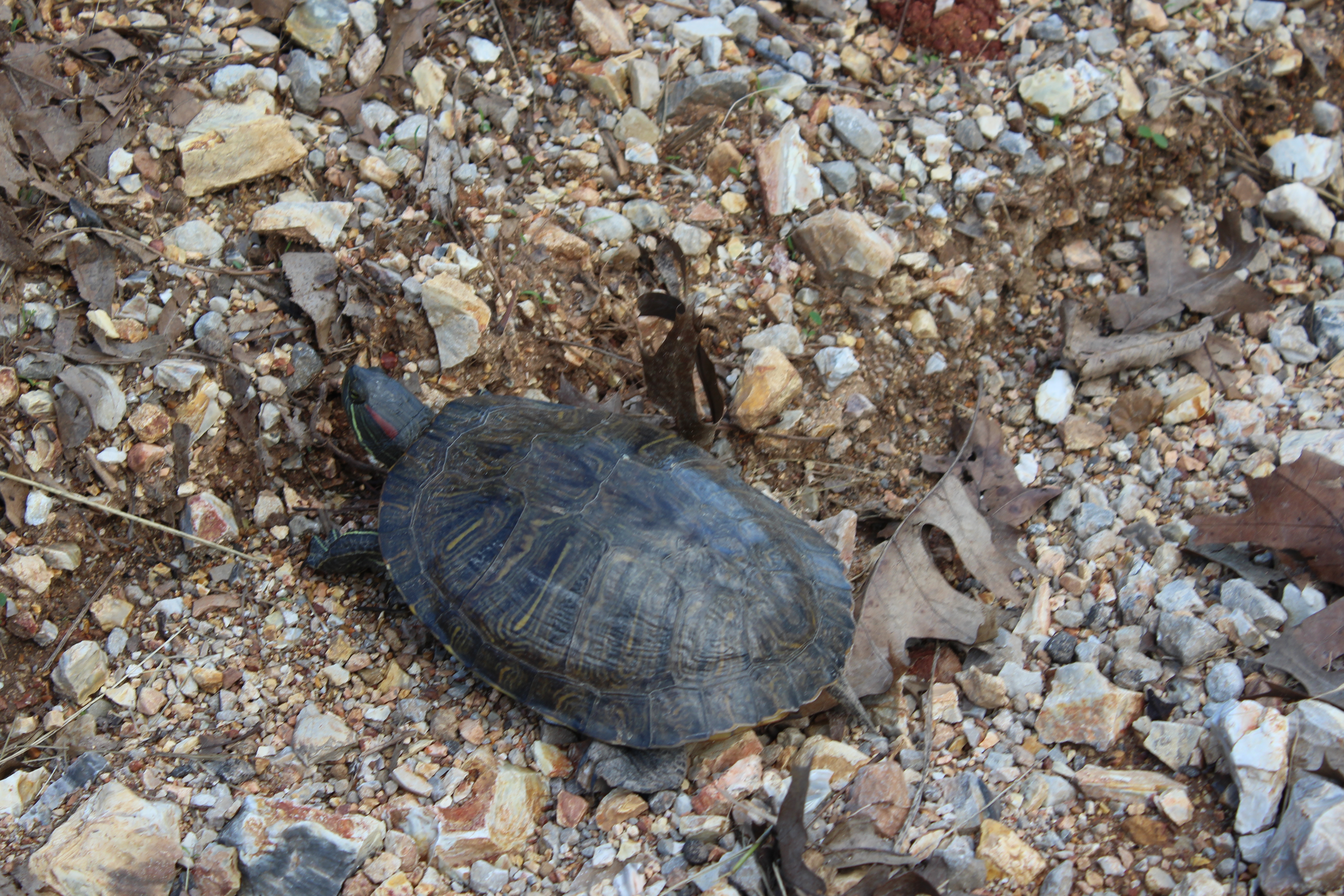 A few trips to the Ozark glades in June yielded no snakes or lizards of note, but we did get some good pictures of arthropods: 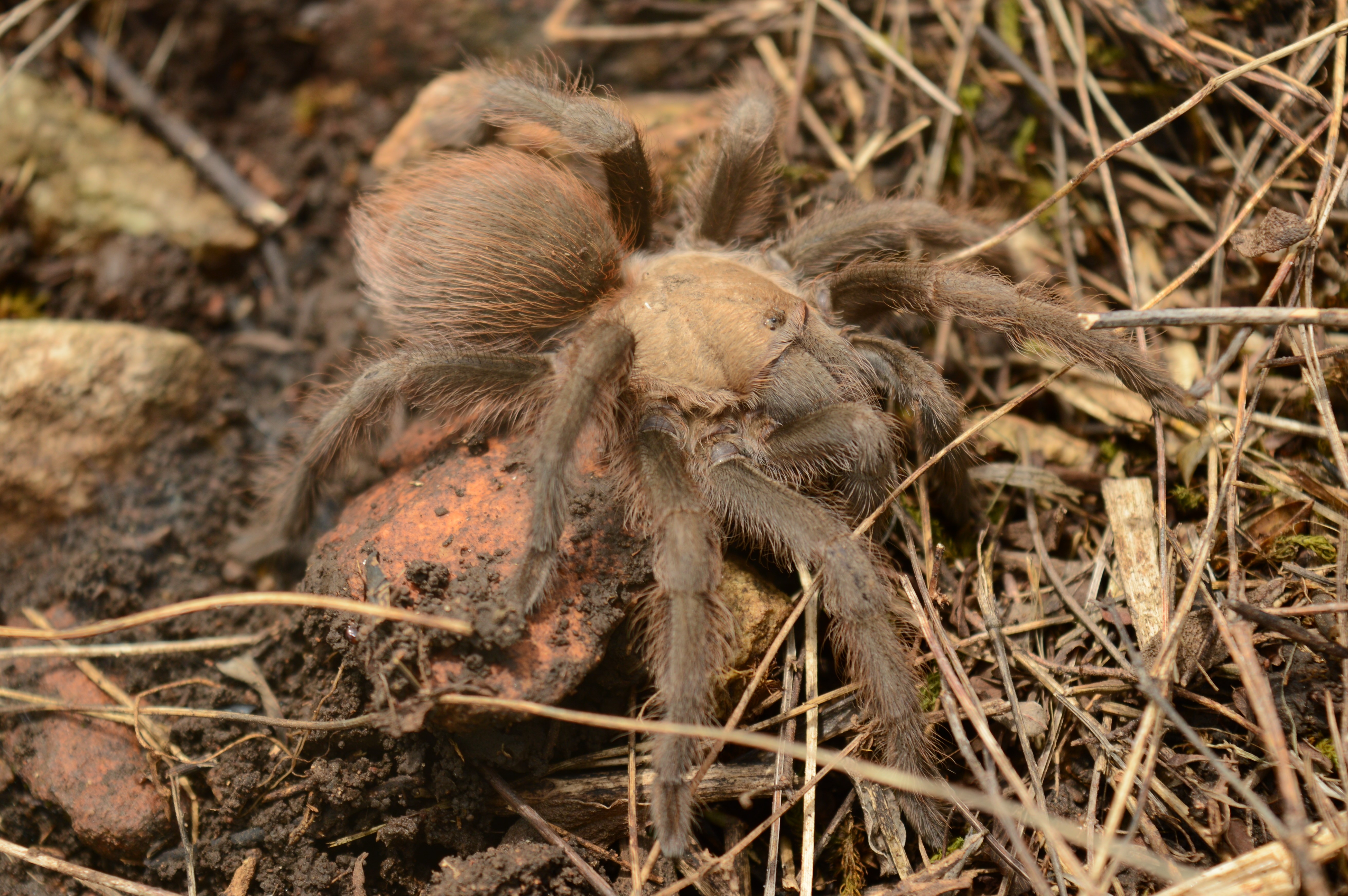 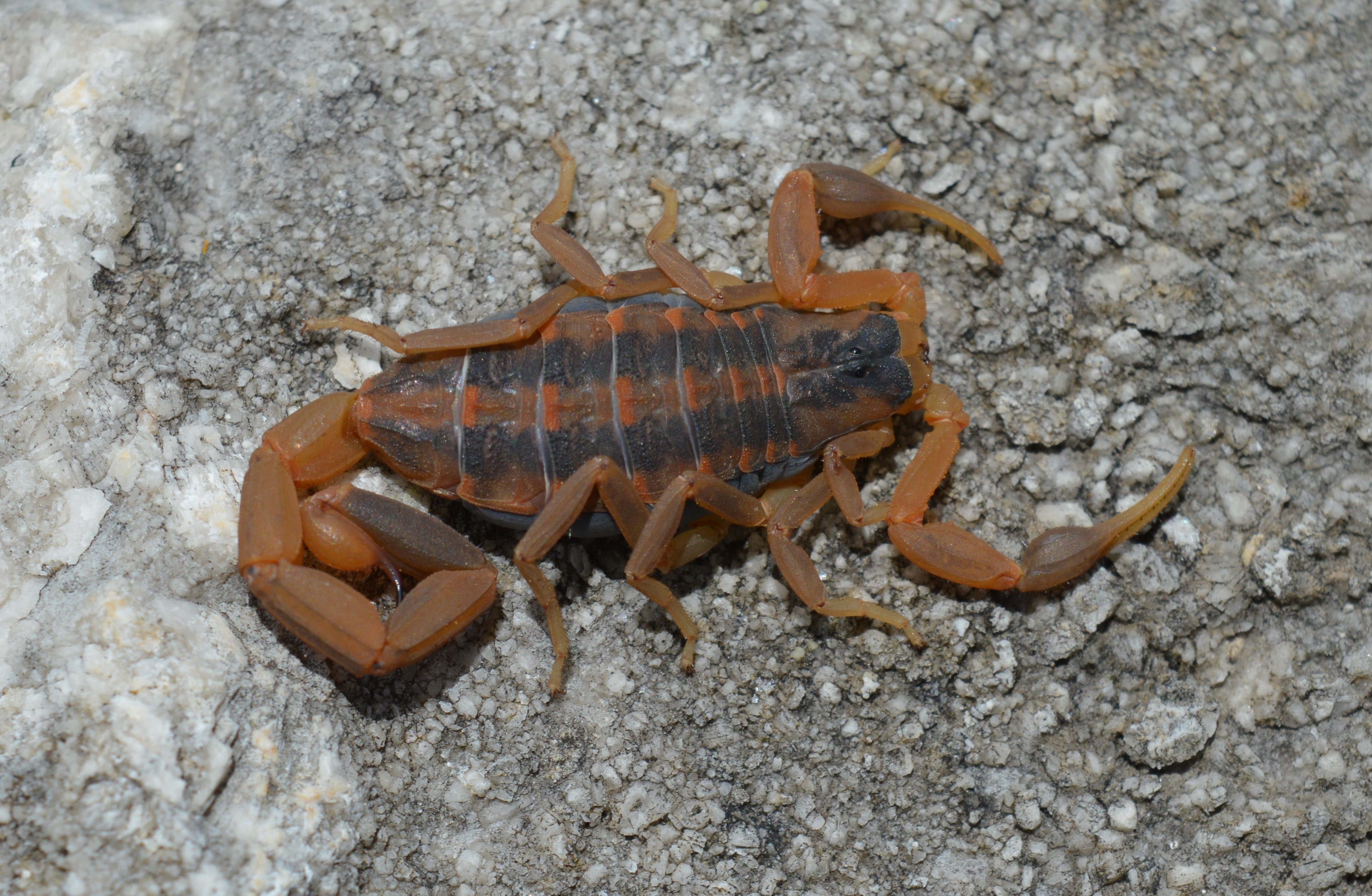 The next time we made it out was July 5th, the last day my brother and parents were in town for a short Independence Day visit. Fresh off the thunderous fireworks from the night prior, we set out for the western prairies and got my brother an Ornate box turtle, some Scissor-tailed Flycatchers (these birds seem relatively common here in the prairies), a Three-toed box turtle, and a nice view of some of our Osage Plains native prairie habitats before they headed back to Michigan. In the past few weeks, we’ve been skunked twice road cruising on hot nights for early-season Pigmy rattlers, but hopefully the activity picks up in August and September.

Thanks for reading, and happy herping! Here’s to hoping that late summer and fall are productive enough that I can post some more pictures for you all.
Top

Thank you for the great narratives and photos, they were thoroughly enjoyed!
Top

Thanks! I'm glad you enjoy the writing and the pictures of our herping thus far this year. We're probably going to cruise for Sisturus tonight in the Ozarks, so here's to hoping! Also, thank you for pointing out my typo on that "Smooth" green snake--I have Michigan on the brain, where we'll probably visit my family in October and go after a real Smooth green snake.
Top
Post Reply
4 posts • Page 1 of 1