I have searched the forums, to no avail. So I figured I would post a question. What kind of flash lights do you ladies and gents use? I'm in the market for some new gear.

P.S. Hope this isnt one of those millionth time questions.

Felixx68 wrote:I have searched the forums, to no avail. So I figured I would post a question. What kind of flash lights do you ladies and gents use? I'm in the market for some new gear.

P.S. Hope this isnt one of those millionth time questions.

I would give you my personal recommendation, but I've never spent more than $40 on a flashlight

Shameless plug, but I'm pretty sure I can't count on my fingers and toes anymore how many people have bought a Fenix light based on my shameless plugs...

socalherper wrote:Hello,
I use a SUREFIRE E1L Outdoorsman. It is the best flashlight I have ever used. It is small,light and bright. It takes 1, 123 lithium battery that will last for hours and is 45 Lumens.
I didn't want to pay over 100 bucks but this flashlight is so worth it!
It works great durring the day if you need to look in cracks ect.
http://www.surefire.com/E1L-Outdoorsman

Check out this extensive thread about flashlights: viewtopic.php?f=2&t=5319

Also, FHF member Damon Salceies is an expert on this subject. If he doesn't see your post and reply directly, you might try sending him a PM.

You will find a heap of in-depth reviews and posts about flashlights gpt herpers here:

Most of the flashlight reviews are by Damon Salceies. He is indeed the expert of them.

Get whatever you can afford from Fenix, they're awesome.
Top

If you decide to buy a high-end light (e.g. FENIX) I would strongly urge you not to purchase from Batteryjunction.com. In addition to the shipping charges (both ways) they charge you an exorbitant 15% restocking fee for all returns. I just purchased a Fenix TK45 from them and neglected to read the return policy. I asked if they would waive this fee and they declined though many, perhaps most, of their competitors do not impose a restocking fee at all. If you do decide to purchase a Fenix, you would be an absolute fool of the highest order not to buy from Fenixoutfitters.com for the following reasons:

1) Their customer service is exceptional. They sent me the wrong color of an HP-11 headlamp (~$70). They immediately shipped out the correct color model and told me to keep the first one as a spare!
2) They have a "100% satisfaction guaranteed" no hassle return policy.
3) Here's the kicker...they offer a LIFETIME warranty on all of their Fenix lights. The mfr. warranty is only two years and I am aware of no other merchandiser who extends this.

The only reason I didn't buy the TK45 from Fenix Outfitters is because they don't stock that model. So why did I even consider returning it? Because the light is too damn bright. Consider this: a Maglite 2-cell light is 36 lumens and their very heavy 3-cell light is 77 lumens. The TK45 pumps out 760 lumens and is considerably smaller and lighter than even the 2-cell Maglite. Yeah, I know. Stupid bright. My HP11 (yes, Josh, I bought it on your rec.) puts out plenty of light for this herper. Make sure you buy the Enloop 2000 Nimh rechargeables...they are the best batteries for these lights.

I will sell you my TK45. It's brand new and still in the box (receipt included), shipped for $115. I put batteries in it and shined it in my backyard, setting it ablaze, for about 1 minute then repackaged it. I also have some brand new Enloops I could sell you, too. Get a good light and you will wonder how you lived without one for so long. The technology has come a long, long way over the past few years.
Top

Here's another recomendation for the Fenix lights, specifically the TK45.
Top

I have an older Fenix TK12 . . . 225 lumens at full output . . . nice to have when walking road cuts or herping at night in the field. I use the 90 lumens setting for around-the-camp usage.
Top

I use a PD31 Fenix for my main light with a TK40 in a holster on my waist for when a brighter light is needed. Both lights are excellent you can't go wrong with Fenix. For a headlamp I use a Princeton Apex Pro and have found them to have excellent customer service, call them up with a problem they will send you a new light no questions asked. Make sure you check out Amazon when shopping online for a light-free shipping.
Top

saleenadam wrote:I TK40 in a holster on my waist

Holster, huh? Where'd you pick that up, pray tell?
Top

Thanks for the help guys! I will definately be going with Fenix. I emailed a rep and told him what I would be using the light for (rock cuts and hiking) and he suggested the LD25 and the TK45. The LD because it's got the best light for color and the TK for flooding the cuts. Not sure after seeing some posts but maybe the TK is a bit much? Anybody actually use the TK for spotting or is it just too bright?

I think it's time I pick up a Fenix TK45 and see what all the fuss is about.
Even "Fringe" on FOX endorses them 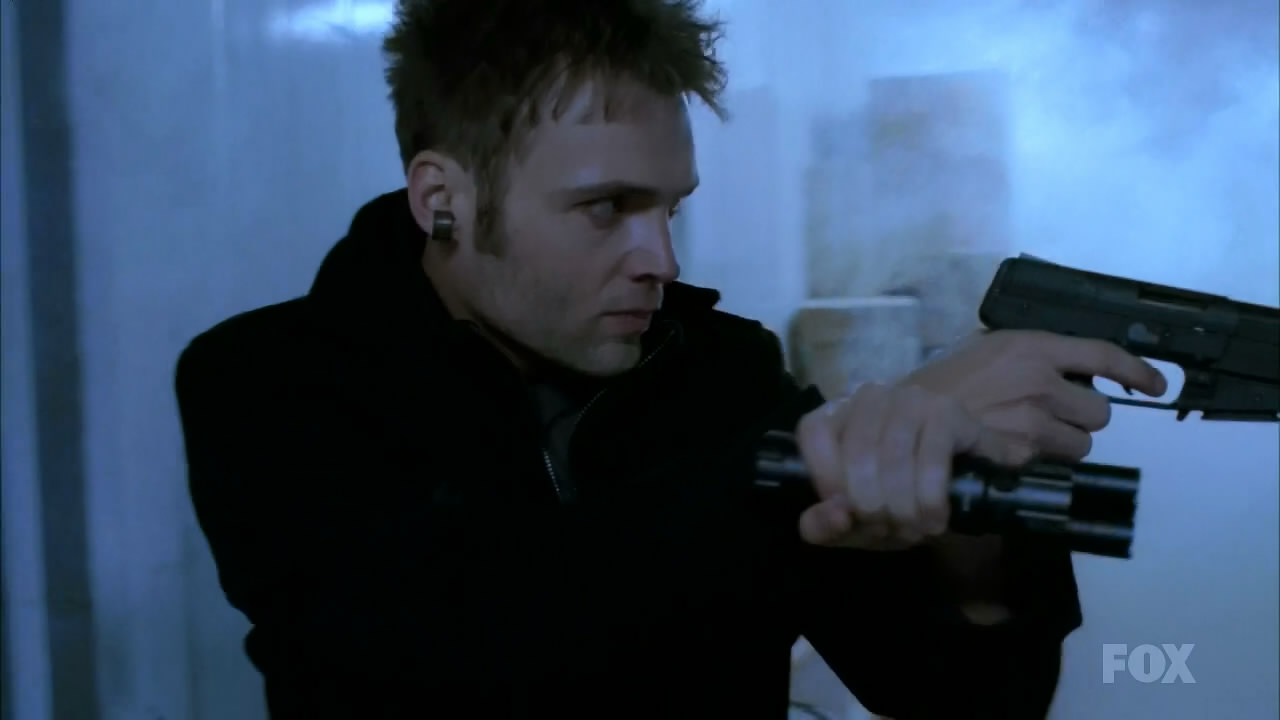 The light you choose depends on your field needs and your budget. I'd call the Fenix lights mid-range rather than high-end. For high-end lights, look to the orienteering and biking communities. Lupine makes outstanding lights -we use their Wilma Pro for finding arboreal snakes at night. It has an output of >1100 lumens and a nice wide beam, allowing you to scan large areas quickly. They're expensive, but they increase the number of snakes found per night, which means you can finish a project faster and with fewer person-hours. Because personnel costs typically cost a lot more than equipment, this is an important consideration if you want to bring down the cost of a project.
All that said, I wouldn't buy a Lupine Wilma for personal herping - they're overkill for things like jumping out of a car to look at a critter in the road, checking cracks in rocks, etc. I'll probably pick up a Fenix this year for those activities. I've also found that the Lupine can be TOO bright for herping in dense tropical foliage where you're looking at stuff that's <2 m away, or for animals that spook in bright light. For finding chameleons or snakes in tall trees, grabbing Nerodia in aquatic veg, scanning shortgrass prairie for rattlers, spotting eyeshine from a distant Corallus, or similar applications, though, the Lupine really kicks butt.
Top

Good points both on bicycling enthusiasts having high-end lights and on it being best to match the light to the job needing to be done. I decided years ago that I'd go with a headlamp rather than a handheld flashlight, as I figured the former could serve both purposes. Trey Harrison (does he still participate here?) was into cycling as well as herps and suggested that I look at the Marwi NightPro Headshot that was popular then with cyclists; he even managed to get me a deal on it when I quickly decided to follow his recommendation.

It came with a 12W halogen floodlight bulb, but for overkill (which Trey rightfully tried to talk me out of) I also ordered a 20W replacement bulb - which I've never used because it's just too darn bright! That 12W setup, though, is amazing, and works perfectly for doing things like hopping/herping boulder fields at night. (Sorry, I don't know if it's still available; doubtless nowadays they have a much more energy efficient version using LEDs, at the very least.) One has to be careful when using a headlamp rather than a handheld flashlight while herping with buddies, though, as there's a natural tendency to look them in the eye once in a while when talking with them, and that can be pretty devastating to their ability to hop the aforementioned boulders.

Another good point, Alex. The mount on my headlamp (i.e. the part touching my hat, or held in my hand) always stays cool, but the light itself gets a bit toasty during use. It's always continued to run fine, though, even when used for a few hours at a time.

The one I use for it isn't actually made for the Fenix it's a holster from an older flashlight I had that broke. It looks like this with the Fenix inside.

Josh Holbrook- You can add one more sale for Fenix.
I got my Fenix TK45 yesterday and took it for a test drive last night.
All I can say is... RIDICULOUS.
It is perfect for my needs. It's literally superior to my car's headlights, but in a medium sized flashlight that takes simple AA's. I am VERY satisfied.
Top

The TK45 is boring, I'm ditching mine in the near future for the TK70, just so I can say I have 2200 lumens to play around with.
Top

Josh Young wrote:The TK45 is boring, I'm ditching mine in the near future for the TK70, just so I can say I have 2200 lumens to play around with.

I have a TK70 and recently put it up for sale. The reasons being it was not as floody as I desired and as stated a little large. I used it on hikes and to spotlight cuts, and it just was not worth it. You run into a law of diminishing returns with herping applications. I can not see a snake 200 yards away on the hillside that it lights up like daylight. I need a floody light.

Here is my reccomendation - ZEBRALIGHT SC600 - Perfect cruising light. Fits in the palm of my hand, 750lm and it is ALL FLOOD. Will light up my backyard from almost my feet to to the fence (30yards) with VERY bright light. Best herping light I have had and I have been thru several Feninx, Thrunight, 4sevens etc.
http://www.youtube.com/watch?v=PkkFdI1zvUQ

Now my question, Has anybody used HICRI lights?
Top

When you're out hiking you need both hands free so a headlamp is perfect. I use a petzel headlamps for both herping, camping and military work. They are inexpensive, light and quite bright!
Top

Fenixlights and Fenix Outfitters (http://www.fenixoutfitters.com/) have been VERY supportive of herpers. During HCU's first outing, after one phone call to Fenix Outfitters owner Daniel, he and Fenix donated several hundred dollars worth of fenix lights for our raffle. Fenix Outfitters used to have a 10% discount for herpers. Most every herper I know carries a Fenix light and I carry two at work. You might email Daniel and see if the herper discount still applies.

Another supporter was Princton Tec. They donated lights as well directly from the factory. My sole headlamp that I have used for the past four years is a Princton Tec Apex. I've put it through hell and it still works like a champ. Their main rep. is a herper too. I'd buy from either of these companies in a heart beat.
Top
Post Reply
27 posts • Page 1 of 1