It’s currently winter here in Australia, so reptile activity has become pretty low; nevertheless, plenty of things are still to be found, although most of them are small and skinky. So be warned, this series of winter herping posts could just as well be titled 'Looking for skinks and other small things'. Anyway, the good thing about living in the coastal tropics is that it never quite gets cold enough to make herping completely unfeasible. So here we go...

Among other places, I have made a few trips to the savannas west of Cairns over the past few months. The first of the two trips was to Chillagoe, a well-known town of about 200 people, for a weekend of caving and herping. I received my new Canon 7D the day we left and so the trip gave me a chance to test run it before my upcoming trip up Cape York Peninsula trip (see Mattsnake's post: viewtopic.php?f=2&t=7612). Chillagoe is one of my favourite places in north-east Queensland, and I have visited it many times for both caving and herping. The area is characterized by limestone karst formations featuring extensive cave systems. The limestone towers support patches of vine-thicket (a.k.a. thorn-scrub, dry-rainforest; take your pick) in what is otherwise an area dominated by open eucalypt woodlands. I did take a few scenery shots, none of which are particularly representative of the habitats described above.

Limestone karst near the entrance of one of the caves we were exploring. 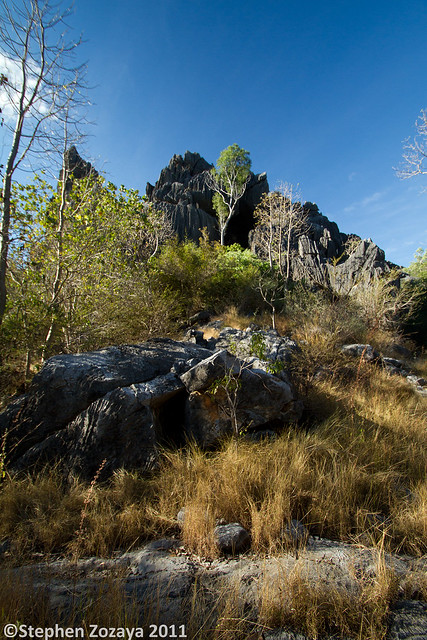 A sheltered area in the middle of one of the limestone towers. 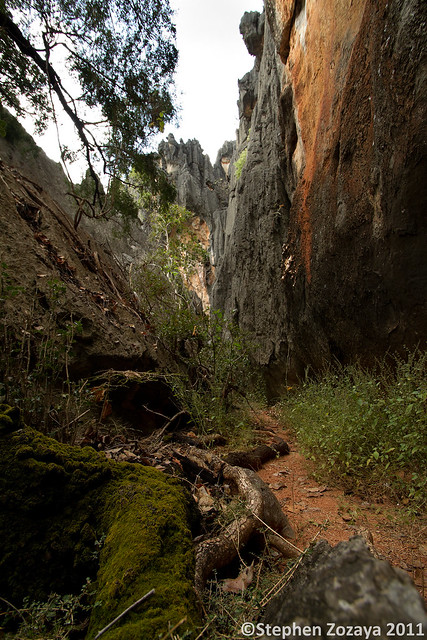 A smaller outcrop (but bigger than the photo conveys) in the town; a good place for a number of gecko species. 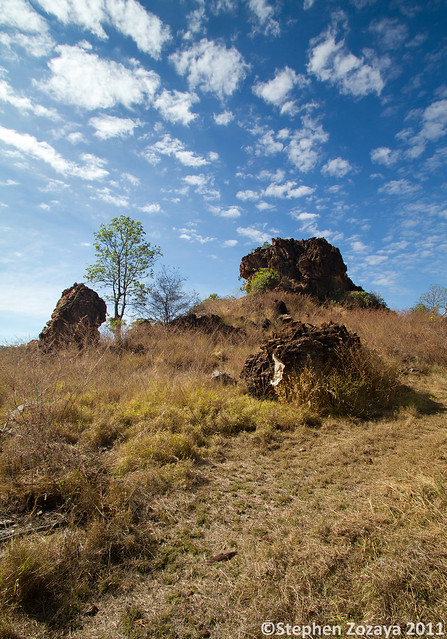 We arrived at the Caving Club clubhouse where, after dumping my gear, I proceeded to look for all things small and skinky that might be finding refuge in the well-watered garden. 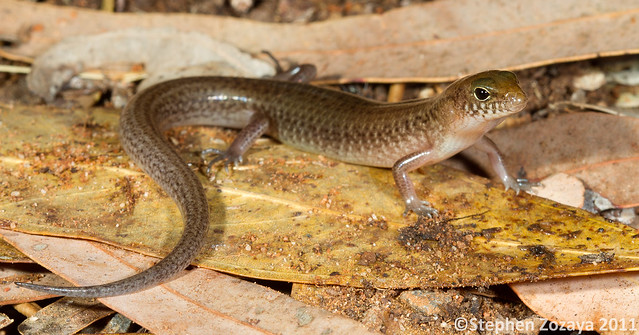 Later in the day a friend and I did some searching around one of the limestone towers. My target was the endemic Chillagoe litter-skink (Lygisaurus rococo). There were plenty about, in addition to Lygisaurus foliorum, but all were difficult to approach and my only photo is not even worth showing here. We found several other species of skink, most of which I sadly neglected to photographed (i.e., Glaphyromorphus cracens, Lygisaurus foliorum, Carlia schmeltzii, Carlia jarnoldae, Carlia munda), and a single Carpentaria snake (Cryptophis boschmai), which I also neglected to photograph. Most were species I have seen elsewhere, but one was new to me. 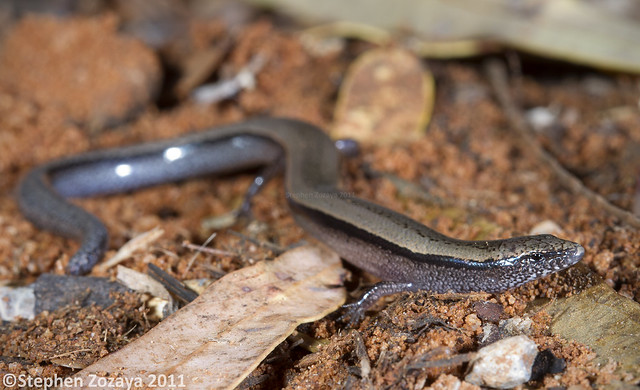 The terrestrial gecko Nactus cheverti is common in the area. 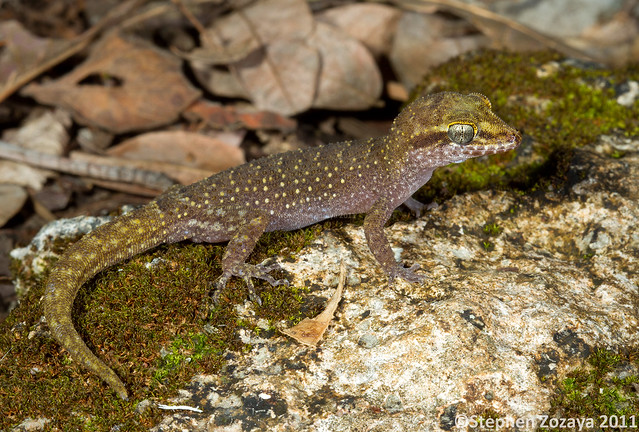 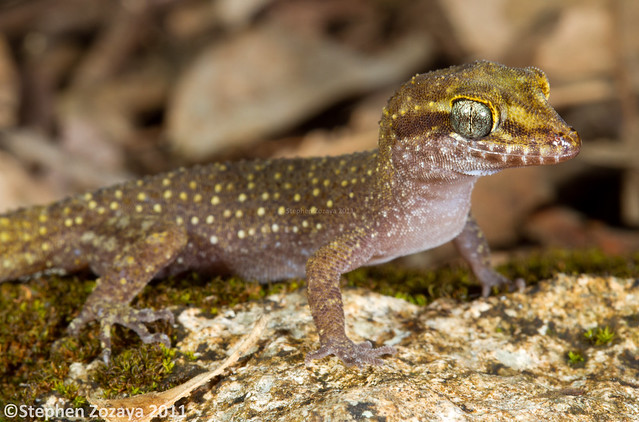 Adam’s snake-eyed skink (Cryptoblepharus adamsi). I like this group of little skinks, even if telling most of them apart involves inspecting the soles of the feet. 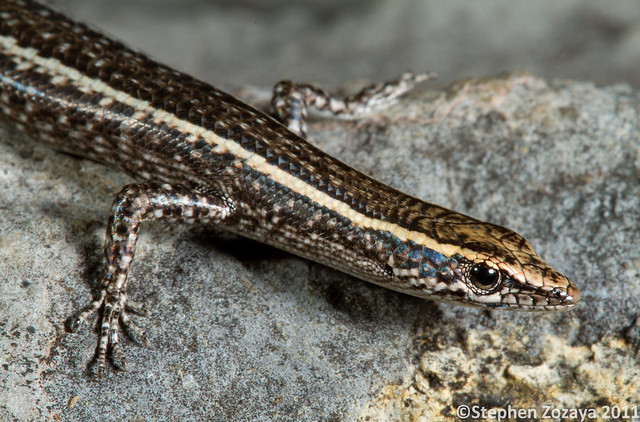 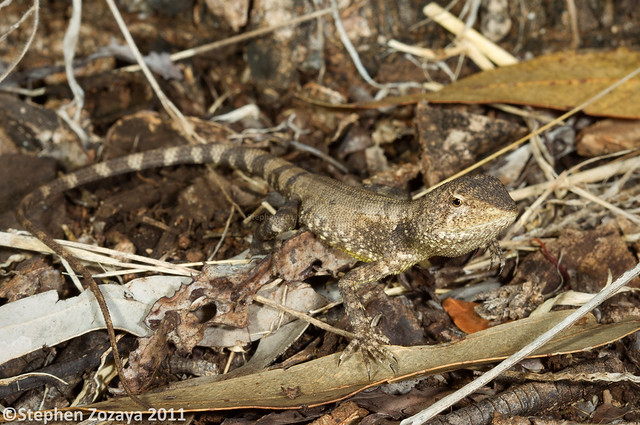 We did a bit more searching around come nightfall.

A striped rocketfrog (Litoria nasuta). This fella was found as photographed next to a creek. 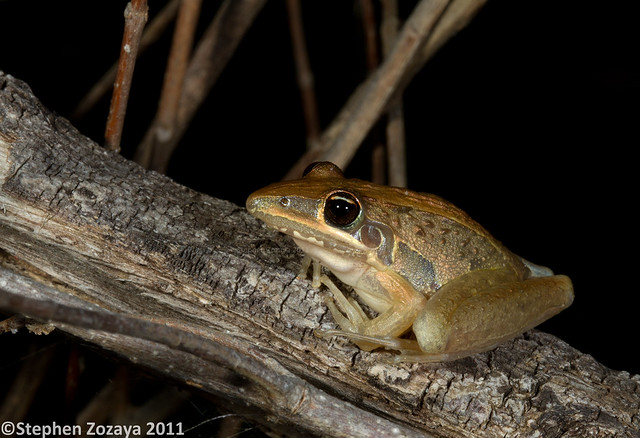 Spotlighting around the karst usually produces a number of geckos, including the large and impressive ring-tailed gecko (Cyrtodactylus tuberculatus) 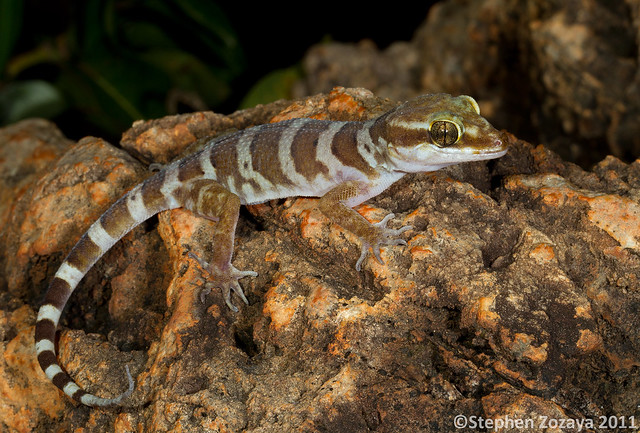 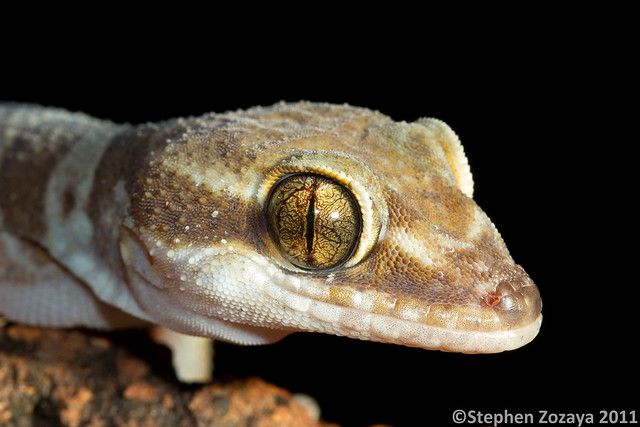 And a young one. 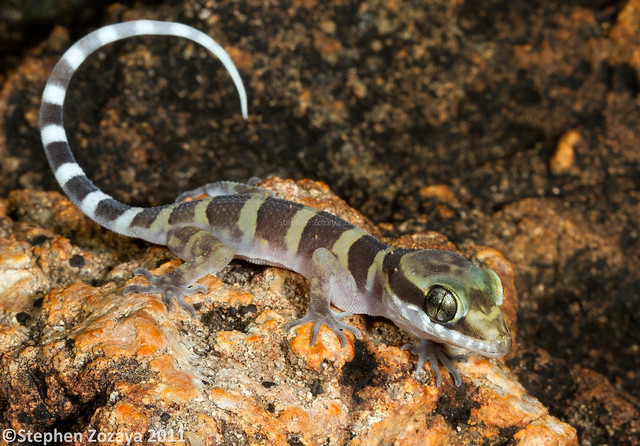 Following my return from Cape York Peninsula, another friend and I visited the same general area. Unlike the last trip, this one was not restricted to Chillagoe but included some more of the surrounding area.

If you ever find yourself in Mareeba and feel the need to get a dose of cute, make sure to visit Granite Gorge. 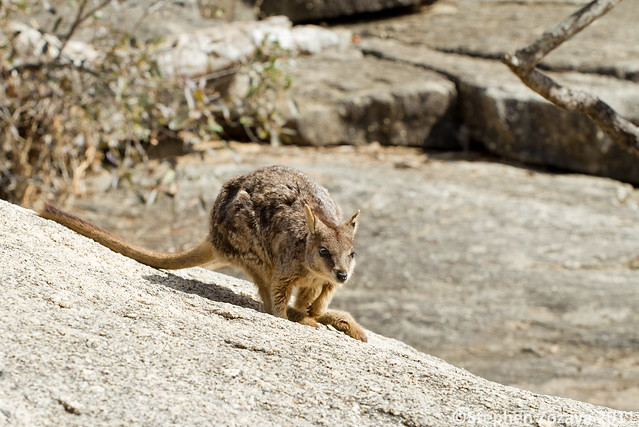 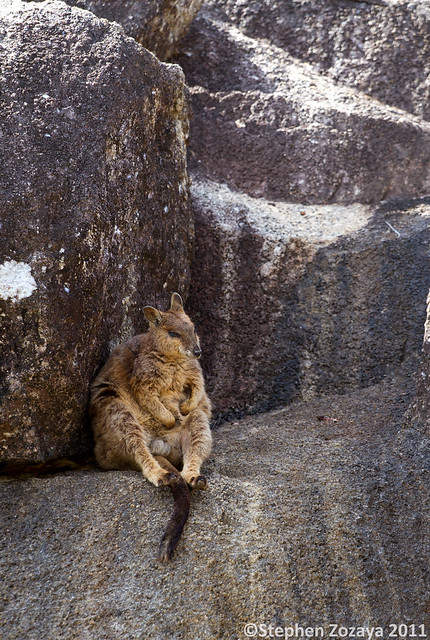 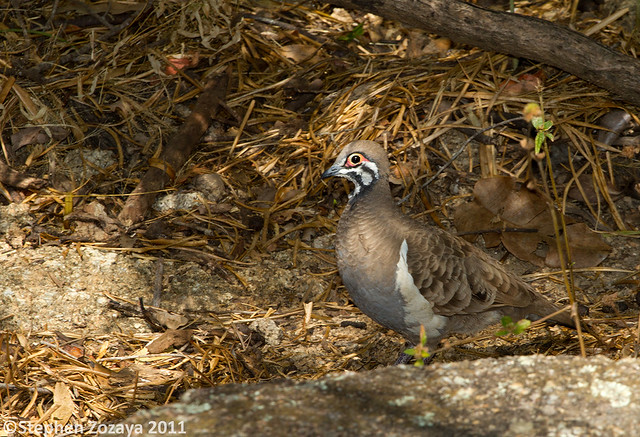 Back in Chillagoe we found many of the same species featured above, most of which I didn’t bother photographing. I did, however, spot a nice collared whipsnake (Demansia torquata) that managed to escape me.

East of Chillagoe we spent a bit of time looking for Storr’s monitors (Varanus storri), but only managed to find more skinks. 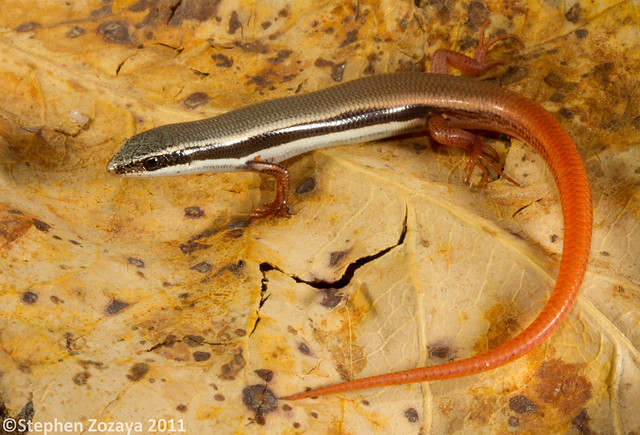 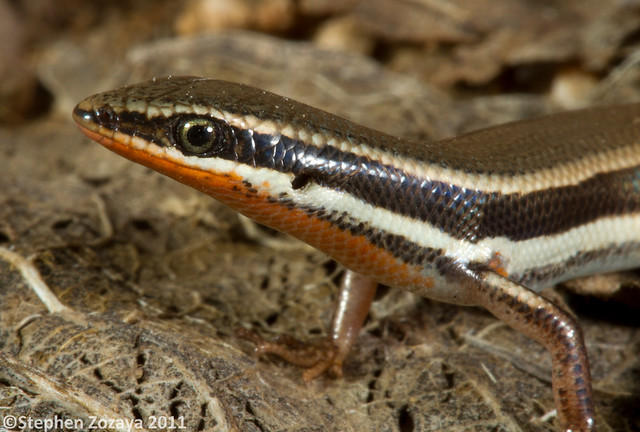 One species I was particularly interested to find was Macleay’s water snake (Enhydris polylepis). Luckily, we found several. 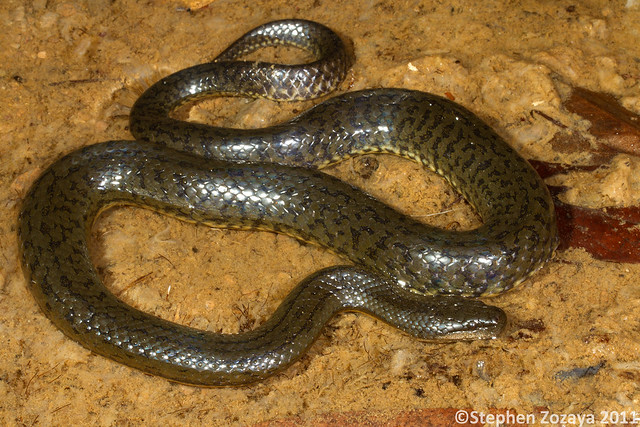 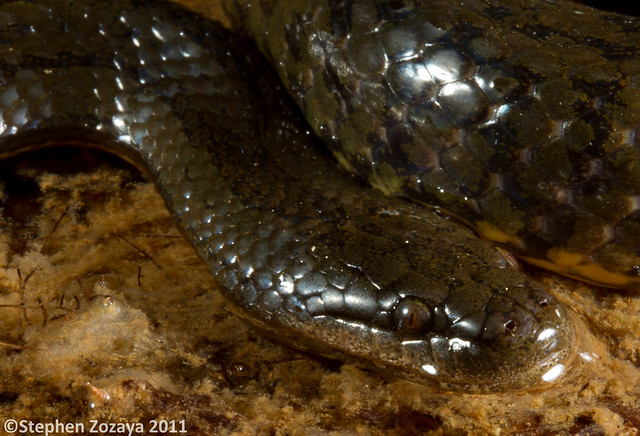 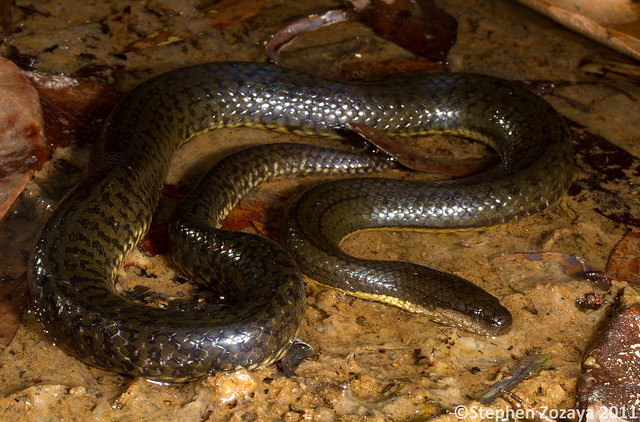 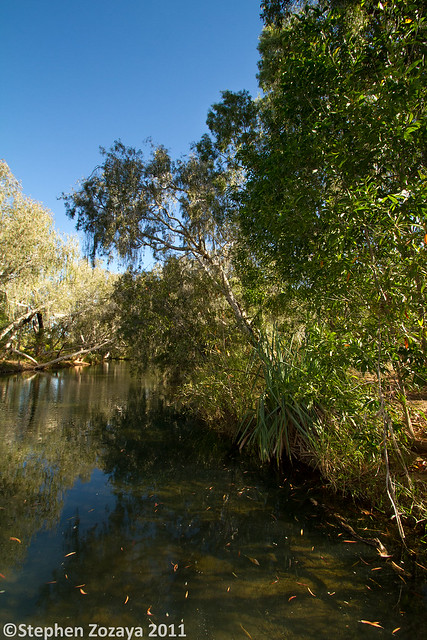 And so ends my first winter herping post. Stay tuned.

Wonderful photos, Stephen! I always enjoy shots of the Aussie skinks ... such an incredibly diverse group.

Great photography! I've never made it out to Chilligoe when I have been in North Queensland but after seeing this post, i'll make sure I head out there next time i'm in Cairns.

Do your water snakes have a bad attitude like ours do here in the states?
Great photo's by the way!
Top

Nice post dude, i'm impressed you got the morethia to stay still enough for a decent photo. Where's your next big trip to?
Top

Ah Granite Gorge. Whilst visiting there earlier this year a large brown snake appeared from and then disappeared under a rock at my feet very very quickly (they are big rocks) and I was unable to refind it. Pretty sure it was a water python but I briefly crapped myself. Then I found this DOR on the driveway on the way out: 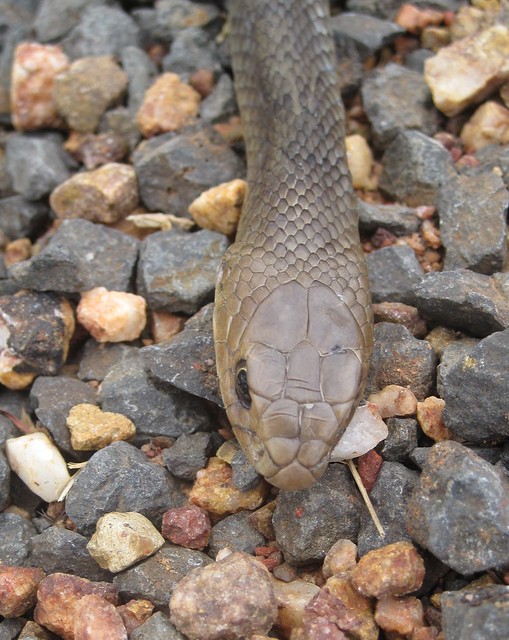 In addition to the Wallabies and Squatter Pigeon it was the only place I saw tawny frogmouth in the area and it is also loaded with some absolutely ancient cycads. A truly primal place. One of these days I'll finish my queensland trip report and get it posted.
Top

Jacob: Apparently they can be pretty pugnacious, but this one wasn't.

Kris: I'm heading to south-central QLD with Gus for 2 weeks on Thursday. It'll be cold and we're mainly doing dingo stuff, but I'm hoping to see a few new things. I'll be doing a big SE QLD trip at the end of the year, I hope.

Great post and photos Stephen! I need to get back up there and out to Chillagoe for a look, I'm itching to get out and about...bring on summer!
Top

Great post, the Nactus cheverti is stunning. Looks like you got to grips with your new camera pretty fast!
Top

Good post, Stephen, and excellent choice of camera. You'll have fun with it, especially once (if you haven't already) you start shooting video as well.
Top

Very cool.
One of my favorite trips ever was a trip we made out to Chillagoe back in 2008. Makes me wish it wasn't such a long drive from my house.

I wish we had known about the wallabies in Mareeba. I would definitely have stopped for that one.
Top
Post Reply
12 posts • Page 1 of 1