Most of what I have put up this year has been deleted, so I am going to recap my first six months of 2010. I'm guessing I'll go month by month, as that's how I have my pics organized. So, in essence, this post should give you a progression of what a sub-par LECH finds throughout the year. I have found a lot, but I herp A LOT, and I have A LOT to learn. Without further ado:

January in the Philadelphia area doesn't offer much besides some streamside salamanders. I've made a vow to keep my kids away from the tv as much as possible. I want them active, and winter is an easy excuse to get lazy. That said, we were checking springhouses in as low as 15 degrees. Here's what we found:

Quite dismal, isn't it? But there were some herps to be found.

Pseudotriton ruber ruber... Northern Red Salamander (one of my favorites)

Pulling streamside sals out of the water in sub-freezing temps is dangerous, so Kyle (NE Pres) made this makeshift holding tank for pictures on an extremely cold day.

We also checked some vernals for winter breeding salamanders, but they were all flooded so heavily that it became near impossible to find our targets. We only turned up larvae.

With February, comes hope. Hope that the warm rains may come early and by the end of the month, we may see some early amphibian migration. Yeah, uhhhh... not this year. More of the same for February. By this time, finding a new springhouse tends to be exciting. Pretty lame, I know.

MARCH! Soon the rains will fall warm on our frozen soil and awaken spring! Even though we had to wait longer than anticipated, Spring did not disappoint.

The beginning of March still looked like this, but I'm gonna jump right into the warm rains right away. Enough of this winter herping crap!

I love spermatophores! Wait... that didn't come out right.

I'm going through my pics and this is gonna be too time consuming to arrange, so I will identify the species the first time it shows up, but if its already been identified and doesn't warrant a comment, I will just post the picture. Here we go...

Roadcruised this muskrat, who wasn't very happy with me.

Did some NAAMP frog routes...

Finally, some reptiles started showing up as it was getting warmer by the end of the month. It was neat herping the pines in the mid 60's with snow still on the sand.

Here's to hoping that all three of my kids are herp All Stars.

At the end of the month, I started making it a project to start checking a foundation where I know of four different species denning. One of them is the Eastern Milk Snake. I basically wanted to check it every few days to start developing a sense for when milks emerged as compared to the others. 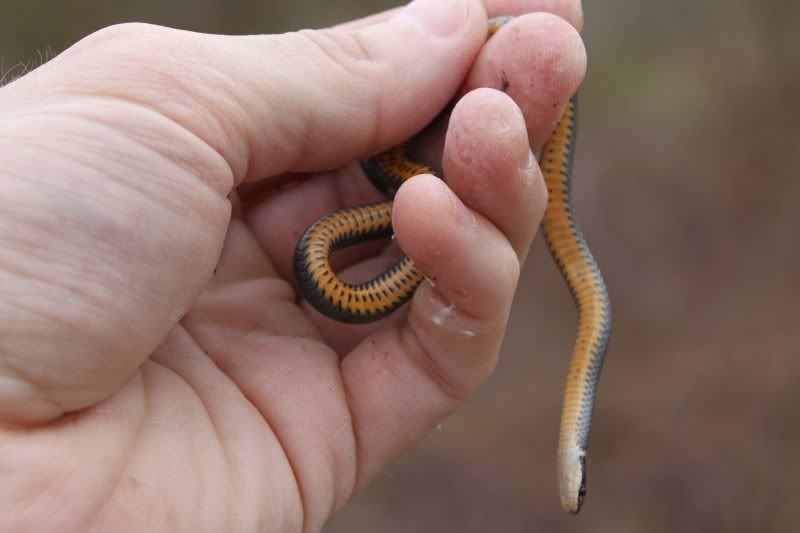 The results: No milks yet.

Ok, April is here. Personally, I love amphibians, but with a small taste of snakes in March, that was all I had on mind. That didn't stop me from looking for amphibs in my free time (rainy nights), but snakes are my target from here til late October.

More checking of the foundation and no sign of milks yet...

More amphibs while waiting for some warm days to wake up the Lampro's. 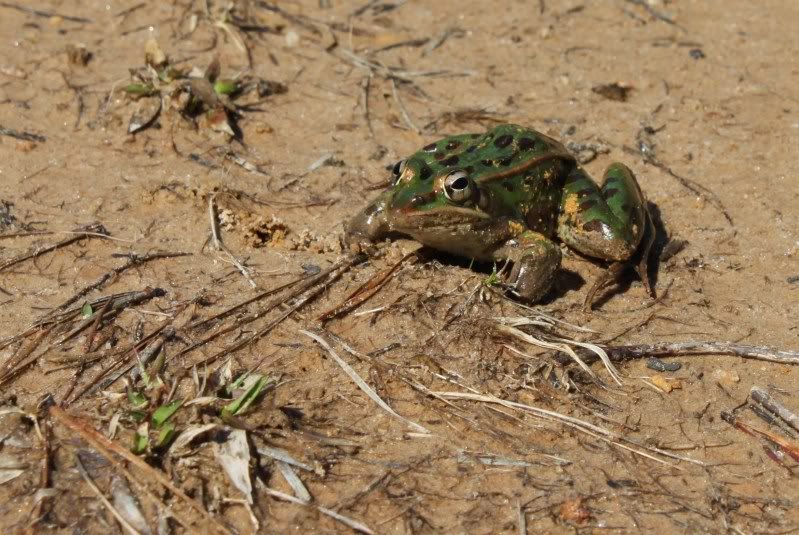 Acris crepitans crepitans... Northern Cricket Frog (I need to get some better pictures.)

There's a painter in there somewhere.

Regina septemvittata... Queensnake (It's there in the branches, trust me.)

Hyla versicolor... Northern Gray Treefrog (My favorite frog, so bear with the pics.)

Back to the foundation, and success! Nate (my middle son) flipped the first milk of the year!

My daughter's first bite ever.

By this little guy. Consider it documented.

May is supposed to be the best snake month in our area. I don't know if that's the case or not, as there are always too many variables. But hearing it from other more seasoned herpers always gets me pumped for the month.

By now I'm ready to take toads and see how far I can punt them instead of taking their picture.

Finally, an adult after the larvae way back in January...

Not exactly winning the beauty award... 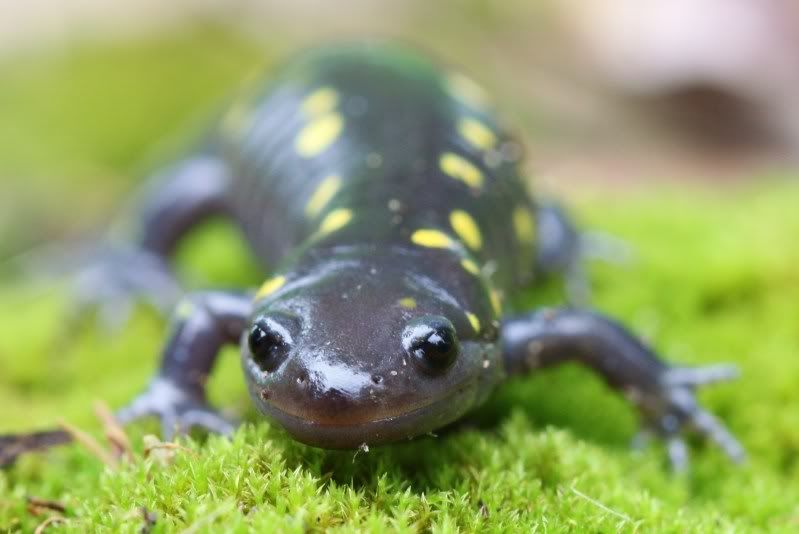 I thought herps were hard to pose. They ain't got no legs, Lt. Dan. Try getting one of these frigging things to sit still.

Found some new locations for milks. Would it be a LECH thing to say that excites me?!

Sad... This Eastern looks like it may been retaining a lot of red as an adult.

My favorite herping picture EVER.

Probably my second favorite herp picture ever. Just needs my daughter, but I don't take her actively searching for anything dangerous. She doesn't listen.

Instead of herping, sometimes I go parasiting. It's much more productive.

One trip home from the Jersey shore.

I also took a trip to Vegas for a week and rounded up a couple of lifers. I might rebuild that post for nostalgia's sake another time. Meanwhile, I'm almost done.

June is still a good time to find snakes in my area, but as it starts getting hotter, you have to be more creative and picky with your timing. Every year, I get a little better. This year, I picked the perfect day, timing, and location for rattlesnakes. Here is the result:

Anywhere there was water, baby Americans were hopping.

Struck out on wood turtles here:

June was a cool month due to the fact that I had a five snake streak in which each species was the largest I had ever found, relatively. Here's the streak, in order.

2. Milk (It was raining out, hence the pics in my truck. I don't want anymore pets; I have kids. They are enough.)

3. Racer (For whatever reason my girlfriend didn't want me posing this one on the seat next to her, so she snapped pics from inside the truck.

Then I ruined the streak by flipping a stupid, average-sized worm snake in the dark. DOH!

June also brought me my biggest heartbreaker... A DOR Coastal Plains Milk. The only one I have found. 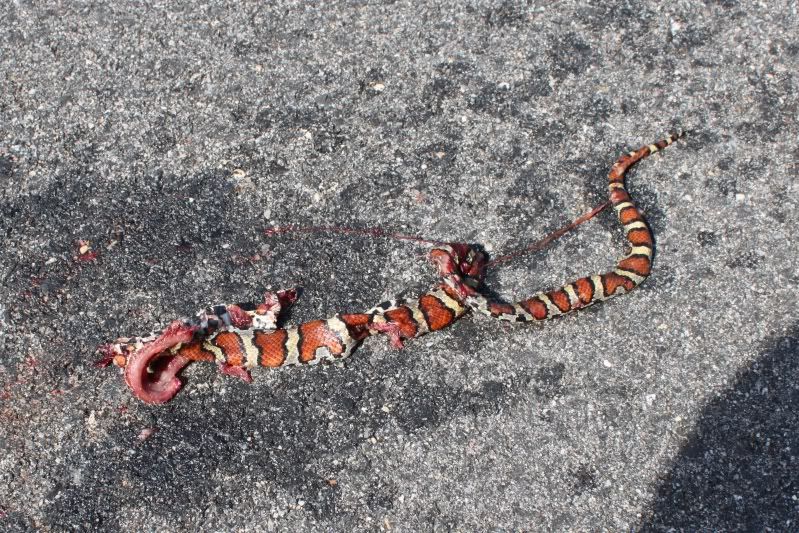 And that closes the book on the first half of 2010.

If you actually made it through this, HIGH FOUR!

Great post! Great variety for where you live. I love the first pine snake. Where around Philly do you live?

Cool pics. I especially love the first timber in the June section. That is one stunning snake!
Top

great finds. i was going to comment on several, but then several became way to many to make individual comments.
that black timber is spectacular though!
Top

cherper: I live in the suburbs about 20 minutes North of Philly. Actually, I can see Trenton, NJ from my house across the river. But I herp within about a 100 mile radius that allows me to huge habitat differences in the Pocono Mountains of PA and the Pine Barrens of NJ. *I love pine snakes too. I wish I could find more.

Andrew G: When I reviewed the pics, I was deeply disappointed that they didn't show off the true brilliance of this animal. I don't hook timbers unless absolutely necessary (on a street or under a flipped rock that needs to be put back), and the lighting SUCKED for pictures. I'm glad that people are still noticing how gorgeous it was, despite its less than stellar photographs.

Matt: Thanks man. Yeah, I know... tons of pics. I doubt half the readers will even get through the whole post. But I just wanted to get my year back up on the forum to review in years to come.
Top

Wow, great report! I like how you separated it by the months. The picture of the kids sleeping was classic. I really liked that Pine snake too.

You posting some great photos, to many to comment on, but I love #1+#2 of the Grey Tree Frog? On the branch!

Really nice post.
I especially liked the first pine snake pic and the first june timber.
Bumber though on the coastal plains milk

you LECH's are having more variety than I am here in TX. that is just wrong

Really neat post, I hope any rugrats I get are herpers at heart

With dialup it took me a while!

Great idea with the recap from this year. Hopefully some will post again pics from several years back. So much was lost in the crash. I always enjoyed going back and looking at some of the older posts.

The pine and timbers were my favorites and of course herping with the kids is hard to beat!

You are having an awesome year!

Actually I only made it half-way through the post, I will have to finish when I have another 8 hrs to devote to it

Also, this individual looks like a Fowler's toad to me. I'm in a Fowler-free zone so I don't get to see them often, but that's what I would vote for. I will leave that up to the experts though

That's awesome. This was a perfect way to spend my lunch hour.
Top

Okay I finally made it, and sir, this is one epic post. Oddly enough, I think my favorite section was the beginning winter months. I remember how they seemed to drag on up here this year, with over a foot of snow still hanging around in March. Cabin fever, and herp-withdrawl, were setting in and I used to live vicariously through the posts of others with great respect for those brave enough to search for salamanders in 30* weather, haha.
Top

Ross... The month by month can definitely show you Californians what we deal with weather-wise.

Brian... I wasn't within hellbender's range, or at least where they have historically been found.

Chad and Yolo... Thanks.

Paul... That's because LECH's rule. We are coming out!

Gary... It took me for-EVER, but I wanted to at least get everything up that was lost from 2010. I don't know if I'll be doing my other past years. Maybe in the winter.

Actually, I was lazy with the id. But, I know that when I found it, I provided a few key pictures to id it to get it right in the database. So rest assured, its correct there. ...Waiting out the winter SUCKED this year, didn't it?!
Top
Post Reply
15 posts • Page 1 of 1