I've been meaning to put together a big Top End post for some time now but the perceived magnitude of the task has prevented me from even starting to sort through photos. Today however, was different - I figured if I don't get started, I never will! This post will be very light on commentary, because merely reformatting these photos has completely taken the wind out of my laptop-using sails.

There will be a second installment to this post, seeing as I can't bare to face the rest of the photos right now. Not sure when I'll get around to doing that one, but it WILL happen (be afaid, be very afraid).

The photos range from poor to mediocre, I have my excuses, but it's mostly just that I don't really take my photography as seriously as I might like to these days.

The first trip was in January this year and it was wet, very wet (that may be why they call it the "Wet Season"...not sure). In fact, it was so wet we had to leave our study site not by car, as we had arrived, but by helicopter....which was actually pretty cool. Regardless, conditions sucked for herping and sucked even more for photography - many of the species we saw I didn't even have a chance to photograph (all the pythons, for example). Anyway, here's a small selection of animals that I DID photograph: 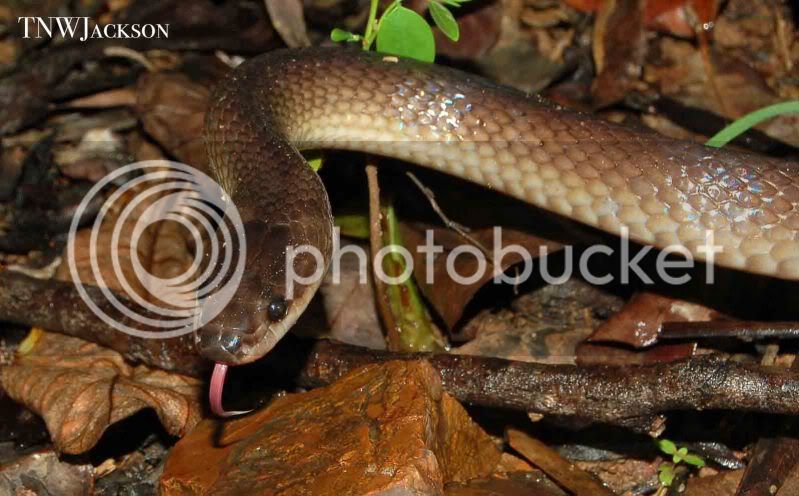 Notaden melanoscaphus - a definite positive for visiting in the Wet.

Bufo marinus - omnipresent in both the wet and dry season.

You can see where the road used to be by looking carefully for the line of telegraph poles.

The second trip was in June/July and was far more successful. Although there weren't bumper numbers of snakes around, we managed to see quite a lot of stuff and I took oodles of photos. This next batch represents less than half of what I'll eventually post from this trip.

Antaresia childreni - we saw stacks of these guys.

Lialis burtonis - and stacks of these. I love how variable burton's legless lizards are, I'll post pictures of 5 or 6 different colour forms that we found (mostly in the next post).

Slightly later in the morning (and now in the East Alligator River), with an ominous shape lurking:

Crocodylus porosus - I completely failed to get any high quality photos of salties despite seeing truckloads. Again, I have my reasons, but that would be making excuses.

The billabong is seriously beautiful in the morning light.

Is this becoming gratuitous yet?

Completely fluffed opportunity to get a good photo of an azure kingfisher (Alcedo azurea) on an evening cruise.

Turkey bush (Calytrix exstipulata) - thanks to Sam Sweet for the ID

I took a lot of photos.

I was going to crop and zoom in on this freshwater crocodile (Crocodylus johnstoni) but I love the way the freshies in Katherine Gorge blend in with the rock and this photo illustrates that well. 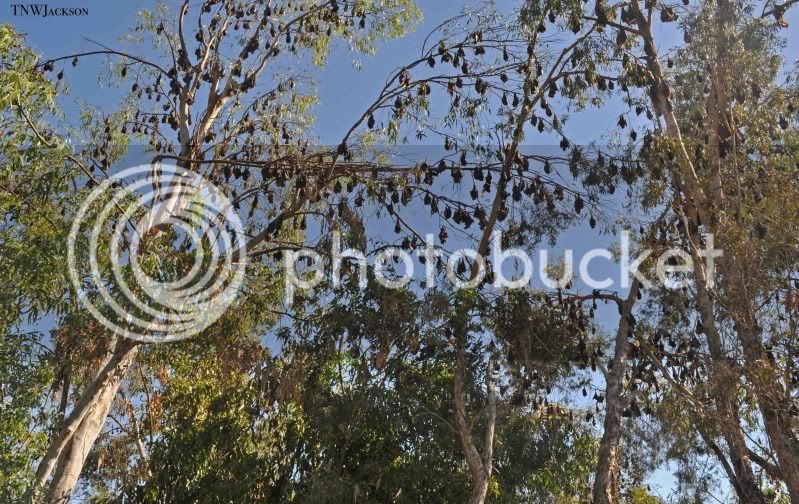 Bower of greater bower bird (Chlamydera nuchalis) - more bird photos to come in the next post.

My girlfriend Genevieve and a boab tree (Adansonia gregorii).

One doesn't really appreciate how intimidating a large freshwater crocodile can be until trying to sneak up on one....trust me, the teeth look bigger in person.

OK, that's it for now. For those left wanting more, don't worry, it's coming at some stage (and there are lots more herps in the rest of the photos). For those who can't stand any more....don't look at part 2

- I didn't see a single one of your study species sadly. I know the Dry (didn't get to Kakadu on the Wet Season trip) isn't the time to see glebopalma and the rest but I certainly looked for them. The only varanids I saw on the whole trip were a DOR scalaris and a (thankfully live!) mertensi (photos next post).
Top

Diggin' that Adansonia gregorii! I have one I just germinated.
Top

Good post, Tim. That flood shot is impressive, and I'm jealous of the bandy and the Notaden. Can't wait for the next post!

Why can I hear (the late) Nias' voice screaming at you to stop being a bloody mozzie and post the rest of the shots? Maybe it's my own guilty conscience.
Top

That's cool Scott - this particular tree is at Katherine Gorge carpark, which must surely be right at the Eastern edge of the species' range, if indeed it wasn't transplanted there. Driving to the Kimberley through Gregory National Park and beyond is an amazing experience if you're into Adansonia, they are near the road in all shapes and sizes - I'll post more pics in the next post.

Haha Chris....I miss Tim telling me what to do, I'm so lost now.
Top

Very nice there Tim and I for one am looking forward to Part 2. Hopefully its heavy on snakes. Were the bandys a plenty with the flooding?

Don"t worry Stephen I'll bring some luck from the homeland and we'll get a bandy....and maybe a Windorah taipan.

Nice. I love the Boiga!
Top

Part two isn't what I would call "snake heavy" unfortunately no. Neither trip was really that snake heavy, we just saw a variety of cool stuff, including a lot that I was unable to photograph. That bandy was the only one we saw actually, if I'd been able to stick around after the rain subsided but the flood waters were still up I'm sure we would have found a bunch of other stuff, as it was it rained torrentially for almost the entire time we were there and then began to fine up a bit as we left haha.
Top

The photos range from poor to mediocre

Excuse me while I chortle gently. What a post!!
Top