Well, another year almost over and several more herps added to the lifer-list. Been living in Costa Rica for the last 7 months now with my "Tica" girlfriend (and occasional herping partner!), Dani, and have found a few little beauties in the last couple of months I haven't posted yet, so I thought I'd share some of the highlights now. I've also included a few pics that I have posted before where they fit in nicely.

I'll begin with a couple of shots of the local area in the Puerto Viejo region (pretty much just beach and lowland rainforest!)

And now some wildlife!
A few non-herps to begin...

Vulture migration... there were thousands of them stretching across the sky! Very ominous.

Both local sloth species are very common in the area, I usually see at least one every few days.
Three-toed...

... and two-toed (unfortunately quite often seen wandering along the electricity wires like this - doesn't always end well!)

Nope, not a jaguar skull... actually a two-toed sloth! Found this guy "fresh" in a nearby forest patch and came back a week later and the vultures and insects had stripped it down to this! Not quite as "cute" as you may first think!

Kinkajou (I hear these strange, large-cat-sized critters running across my roof most nights! This pic taken from my balcony)

Butterfly having just emerging from its chrysalis

Something out of "Alien"

I think this is one too!?

The compulsory "open-mouth shot"... the last view of many a frog!

Neotropical green anole (Anolis biporcatus), also being munched on by a mosquito... nothing is safe from those little *^&%^&$%s!!!

The yellow form is very often seen in Cahuita National Park, on the path right next to the beach

Central American coral snake, curled up right in the middle of a forest path at night (almost got stepped on!)

A few weeks ago I did my "visa run" across the border into Panama to get another 3-month stamp in my passport. This requires you spending 72 hours out of Costa Rica before you can re-enter, so I thought I'd head down to the islands of Bocas del Toro, famed (in the herp world) for its assortment of strawberry poison frog variants on its different islands. I spent a few hours searching on the small island I stayed on, but these little frogs eluded me. In fact, other than geckos and the odd cane toad, I found no herps to speak of while in Bocas. It didn't help that it rained (hard!) almost non stop the entire three days I was there.
Plenty of birds though!

The Panamanian mainland, from the boat to Bocas del Toro

One of the many islands that make up Bocas

Spent a while watching pelicans dive into the huge shoals of tiny fish and experimented with the "burst mode" on my camera to capture a dive sequence. Superimposed to create a single image, showing the stall, mid-dive, folding-back the wings just before impact, and the splash created after the pelican had disappeared under the water.

Had better luck with poison-dart frogs back in Costa Rica. There are three local species in my area...
The largest and commonest, the green-and-black "pdf"

Strawberry pdf. Here on CR's southern Caribbean coast they are uniform red, without the famous "blue jeans"... naked, if you will!

Sharing a leaf with a cricket

And the rarest of the three, the striped pdf. This thumbnail-sized little guy was carrying five tiny tadpoles on its back.

"Piggy-backs" all round! Giant forest-floor millipede with the above frog hitching a ride

And trying his best to mimic the above species, a neonate false terciopelo (Xenodon rabdocephalus)... not a bad effort!

Any theories about the black-and-white striped tongue?

And to finish, the largest snake I have yet found here in Costa Rica, a gorgeous tiger rat snake (Spilotes pullatus).
He was crossing the forest floor between two trees and I would have loved to get some in-situ shots, but as soon as he realised I'd spotted him, he dashed across the floor. He was a bit "strikey" when I first got hold of his tail, puffing out his throat and laterally flattening his neck, but he actually settled down very quickly as soon as he decided I wasn't trying to eat him. I reckon he must have been around the 8-foot mark.

Wishing you all a great Christmas,

Great post! Its these types of posts that make me unable to wait for my own trip in March! Your unknown frog is Cruziohyla (Agalychnis) calcarifer, which is an awesome find!
Top

No Crotalus simus yet?

Great post Robbie! Looks like you are having a blast there. Love that huge Spilotes! Also, the pelican sequence is really cool. I'll be down in June; maybe we can hook up for some herping? Happy Holidays!
Top

Great post, thanks for taking the time to put it together.

Awesome stuff! Thanks for sharing, Robbie. I miss Costa Rica so bad.

I love the headshot of the boa in particular, that iridescence is rad.
Top

I agree with your Mexican Treefrog (Smilisca baudinii) ID. Did you find it on the wire? 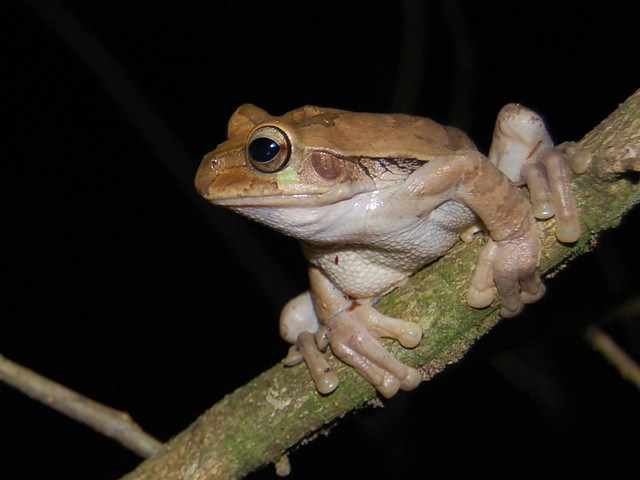 This one from Cahuita.
Top

Awesome stuff. Loved the treefrogs, esp. the calcarifer and spurrelli. Also loved that Xenodon. All things I hope to see in that area in a few months. I'm curious how you found the calcarifer. Have you had much luck walking Gandoca trails?

Excellent post! you have some really great herp shots but I like what you did with the pelican picture!
Top

Lizardman1988 wrote:Great post! Its these types of posts that make me unable to wait for my own trip in March! Your unknown frog is Cruziohyla (Agalychnis) calcarifer, which is an awesome find!

Thanks for the ID! Found another two of them today around the same pond, so hopefully more to come!

Thanks Rich. Nope, no simus - not native to the Caribbean Coast, only Guanacaste I think (much drier up there). We have a pair of them at the local wildlife rescue centre (kept illegally beforehand and confiscated), and their rattles don't seem to work in the humidity of the Caribbean side of the country!


Dr. Dark wrote:Great post Robbie! Looks like you are having a blast there. Love that huge Spilotes! Also, the pelican sequence is really cool. I'll be down in June; maybe we can hook up for some herping? Happy Holidays!

Sounds great! Unfortunately I'll be back in dismal England by next June

Hope you have a great one though! I'll expect another of your epic CR posts!

I love the headshot of the boa in particular, that iridescence is rad.

He was the most iridescent boa I've ever seen!

Rags wrote:I agree with your Mexican Treefrog (Smilisca baudinii) ID. Did you find it on the wire?

Yep! That photo is "as-found". Made me laugh when I spotted him!


kcmatt wrote: I'm curious how you found the calcarifer. Have you had much luck walking Gandoca trails?

The calcarifer was found sleeping on a leaf at the edge of my local "frogging pond". Regularly visit Manzanillo (haven't got as far as Gandoca yet!), but there are some cool trails there I like to walk at night. Usually find some interesting stuff there.

Kfen wrote:Excellent post! you have some really great herp shots but I like what you did with the pelican picture!

Very nice pictures and great diversity! Looks like you had a wonderful trip! On a side note, the small R. annulata looks in fact to be a young R. funerea. The lines under the nostrils and the blotch pattern are consistent with R. funerea. Those two species are sometimes hard to distinguish (a Google image search will show a lot of R. funerea that were identified as R. annulata).

Fantastic post Robbie! So hard to pick a favorite photo I can't even imagine how many you must have taken. I think I accrued 100gb of photos from a two month trip to Guyana this summer.
Top

How did I miss this post? But I'm glad to see it now, excellent photography. Really liked the sloth shots, and Blunt-nosed vine snake close up is great, and the coral snake is...oh okay, I liked the whole post, nice job, and thanks for taking the time to post I really enjoyed it.

Oh, wait- The Poison Dart Frog w/ the tadpoles on its back riding a millipede is a crazy photo. NICE!

Great photography and some really amazing finds! I love the white hourglass frog and C. calcarifer is a nice find. I cannot get enough of the snail-eaters - the Dipsas is awesome! The photo of the lovely poison arrow frog riding the millipede is pretty special and that boa has some amazing coloration!

Really a fantastic post and the shots of the anoles and casque-headed lizards are spectacular!
Top

I've had a link to this post on my desktop since December, since I wanted to wait until I had more time to look at it with the proper respect and attention. Today I finally did. And...wow! Wowowowow!! Every photo is a winner .... especially the piggybacking frog and the pelican Stukas. But the last one takes the entire bakery. The big, almost kitschy tropical cliche flower in the lady's hair is in such stark contrast to the huge serpent she's handling - I can't get enough of that photo, it's a total hoot!

Thanks very much for posting these!

PS: Are you still down there?
PPS: What's a Tica?
Top

I'm with Dell. How did I miss this one?

Great post. I like the overlapped images of the pelican. Pretty cool to see in one photo. I hope to be your neighbor some day. How are things going with the visa runs? I heard this year they made a new rule. 30 days in, 3 days out, 30 days in, 6 months out. Are th ey enforcing it?
Top

Hans Breuer (twoton) wrote: PS: Are you still down there?
PPS: What's a Tica?

Well I can't answer the first question for Robbie, haha, but the second one I think I can.

"Tica" is a term used for the locals of Costa Rica. "Tica time" would be the term used for how laid back everyone is - no rushing to be somewhere (which is nice)

Natalie McNear wrote:"Tica" is specifically the feminine form of the word, that is, a Costa Rican woman. Don't call a Costa Rican man a Tica.

Absolutely, without a doubt, stunning. Awesome images of awesome animals. Thanks for sharing!

Very cool images, especially the pelican. Did you use a tripod for that shot? May I ask what camera you are using? Looks like a superzoom?

It looks to me like your best find was that Homo sapien!

The snake she's holding reminds me of an Australian tiger snake for some reason.
Top