It's been a little quiet here so I thought I would share a couple of snakes that I have had the pleasure of keeping for many years.

The California kingsnake in the photos below was the first snake that I ever kept and began my life-long interest in herps. It was caught in a field that has since been developed for many miles around by some childhood friends 27 years ago. All of my friends were afraid of the snake and were more than happy to let me take it home with me. I named him Gretzky, since The Great One had recently joined the Kings. I have to give much of the credit for his care and keeping in those early years to my mother, as I was a pretty young boy at the time. This snake was already at adult size when found, so I assume it was probably at least 3-5 years old, maybe more. Given that I have had it for about 27 years, he is over 30 years old now. 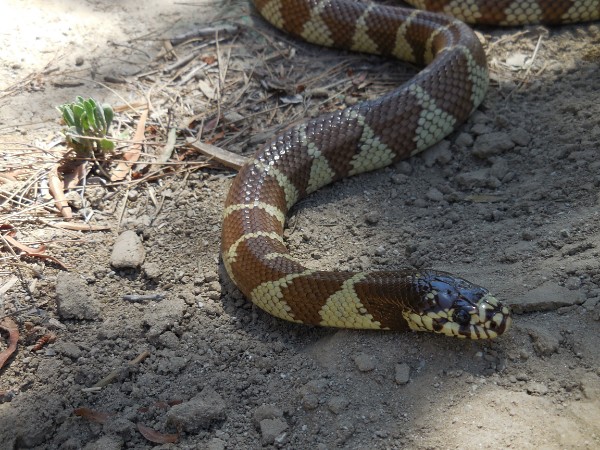 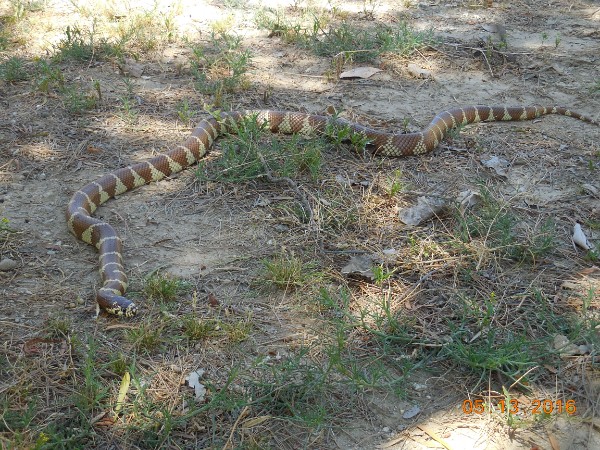 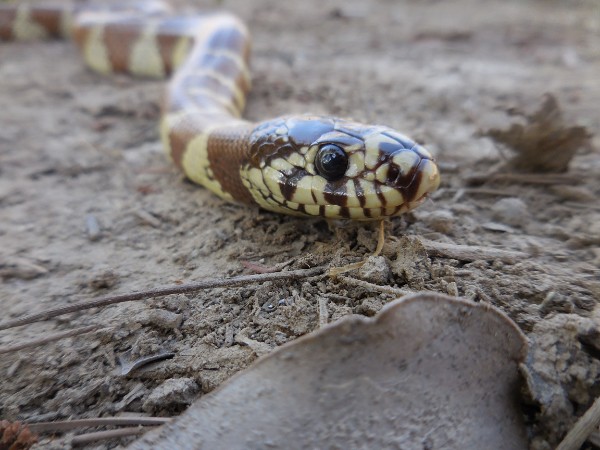 This California mountain kingsnake was given to me about 15 years ago by a family friend who had kept the snake for a long time, though I don't know exactly how long. I believe that the snake is probably well over 20 years old. 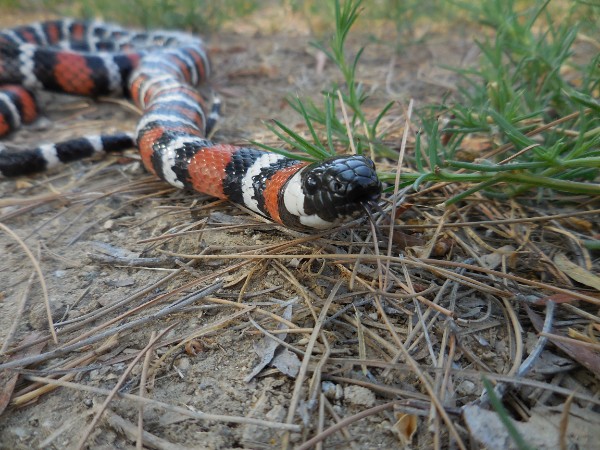 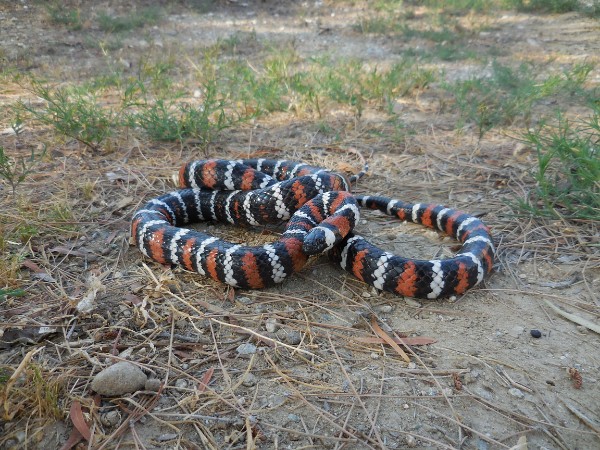 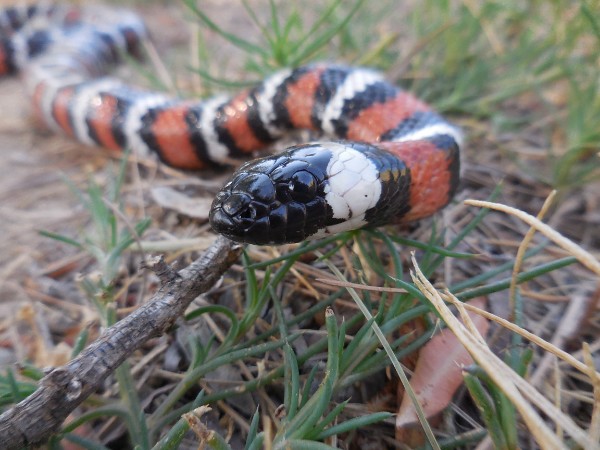 Please feel free to share photos/stories of herps you all have had for a long time or that have otherwise impacted your life in special ways.

I still have a female Ornate Box Turtle (Terrapene ornata ornata) which was given to me in 1983. She was an adult at that time, so I'm pretty sure she's at least 40 years old.

I'd always said she'd outlive me, but last spring she was diagnosed with cancer. Rather than invasive surgery involving sawing open her shell to "maybe" get it all, after conferring with the vets I decided to let her live her life as usual unless/until she started showing signs of distress. So far, no apparent changes.
Top

Last year my old Mountain Horned Lizard was diagnosed with an oral cancer Chris. She was probably 17 or 18 yrs old, she was a fully adult girl when received, a fixer upper that was my quiet, steadfast work companion, as she perched on her tree, same place, same way every day. Eating became too painful, she would be hungry but would shake the food item out of her mouth once her jawbone was affected. That's when it was time. Euthanized by injection that went smoothly and quickly with a muscle relaxant first.

This is a nice thread. I love old snakes. My guys I produced at home are all pretty young - I may have to leave the Kings to you in my will Daniel!
Top

I don't think the Slavens update the page linked below any more--I offered to take up the responsibility a few years ago but never heard back--but it's a decent resource for longevity records. Based on the information on the site I hold the record Terrapene ornata, Coleonyx brevis, and Coleonyx variegatus.

I'd say if a person has an old pet, they should check it against this list and then consider submitting a note to Herpetological Review.

I think longevity lists can be deeply flawed - the acanthosaura, like chameleons take about 1-2 years to die if they are kept without special attention to air flow, heat gradients and most of all - how water is presented. Many arboreals in the past were "sprayed" which does not hydrate them enough. A continual drip that is an easy, volitional access will put years on their lives.

My Mt Horned had water dripping at a starting rate of about every other second, slowing with reduced water weight and the drip container being refilled twice daily and topped off per pitcher before i left to continue through most of the night.

However I have wondered if she developed the neoplasm because of her habit of perching underneath the plastic artifact that directed its flow. It was running over her face for many hours, many years. I wonder about the flourocarbons and other poly unknowns in the plastic, and mentioned this to the veterinarian. She said it was impossible to know. She also mentioned that she hadnt ever seen a Mt Horned in such good condition, despite the cancer, which didnt affect her behavior even as the mass in her mouth became very obvious.

I think reptiles rarely die of simple "old age" but because of these factors. However if it appears a reptile has out lived its expectation, it looks like it died because it was "old" but its more of an accumulative condition finally having its say.
Top

I didnt produce these guys, but took them home as tiny froglets. Reggae I took home first and he's 16 years old. I recieved another group of Whites about a year and a half later, and took the other one home when he was big enough to be housed with Reggae. Although some may think they are "old" I expect them to live another decade at least.

These photos were all taken within a week ago ( the one side by side) to a couple months. These pics are of them expressing diurnal basking behaviors. At night is when they forage and soak.

The one on the right first pic is named Rainman. ( :
Top

Chris, sorry to hear about your box turtle. I am still often amazed by the apparent longevity possessed by chelonians and box turtles have always seemed such special little creatures to me. I hope she ends up hanging around for many years to come!


Kelly Mc wrote:I love old snakes. My guys I produced at home are all pretty young - I may have to leave the Kings to you in my will Daniel!

I think reptiles rarely die of simple "old age" but because of these factors. However if it appears a reptile has out lived its expectation, it looks like it died because it was "old" but its more of an accumulative condition finally having its say.

I think this is true. I had begun to come to a similar conclusion in recent years.

What a great face, so quizzical.
Top

Yes they are cute. All pics of them (and all of my charges) are always in situ - never placed or posed. They seek the same resources so are frequently together but not always and unlike many White's Tree Frogs they are never touched or held. I service and swab around them like a housekeeper lol. The infrequent times I have had to pick them up, they protest strenuously, crying/vocalizing and pushing against my fingers with their feet. I feed them per forceps which is fun.

I like your Kings Daniel. You're a cool guy for thinking of doing this thread, and even cooler for being so committed to them.
Top