So, I posted several months back a few pics of some A. annulatum eggs in-situ, and again some as they hatched (link above). Here is some follow up...
I kept some of the larva to watch as they grew and developed. These eggs were too far from the edge of the shrinking pond and were already out in the environment for a few weeks before I kidnapped them. They would not have been able to successfully hatch. I had the option to pitch them into the pond or take the photographic opportunity. I took the later choice.
I kept them in a glass baking dish initially and watched them as I hand-fed them brine shrimp. They were ravenous and if I had a filtering system I probably could have fed them much more than I did. As they grew, they began to cannibalize each other, as they would in nature, though, the confines of the baking dish may have contributed to a bit higher rate of this feeding strategy. As numbers dwindled and size increased, I moved them to a 30 gallon aquarium with about 5 inches of water and a bunch of oak leaves in it for substrate.
As they grew a bit, I filled the aquarium and began to filter it and cycle it as a regular fish aquarium. The larvae seemed to do well in the expanded habitat and I would see them set up some "territories" to hunt for brine shrimp when I added them, and to hide from bigger litter mates. Well, I think it was a mistake to add small fish to the aquarium to transition it in preparation for removing the larva and continue as a tropical fish aquarium. As soon as the fish were in the aquarium, the larva responded with obvious "dislike". They all remained hidden throughout the day, and were much more cautious when they came out at feeding time. Clearly a response to the new smell, or whatever the specific stimuli, indicating possible fish predators now in the habitat.
The next response I saw took about a week...they began starting to metamorphose at a very small size! At around 1.5 inches or so, the gills began to shrink and they began swimming to the surface and gulping air before quickly swimming back to a refuge near the tank bottom. Mortality was pretty high overall, as I do not have facilities to house multiple larva in individual containers, so now I am down to two small metamorphs. I think it is interesting that they responded with such obvious stress to the introduction of a handful of baby danios to the water. The first pic is one with my overexposed thumb for general scale. Lastly, a couple of shots of the metamorphs, several weeks after coming out of the aquarium and recently with developing pattern. 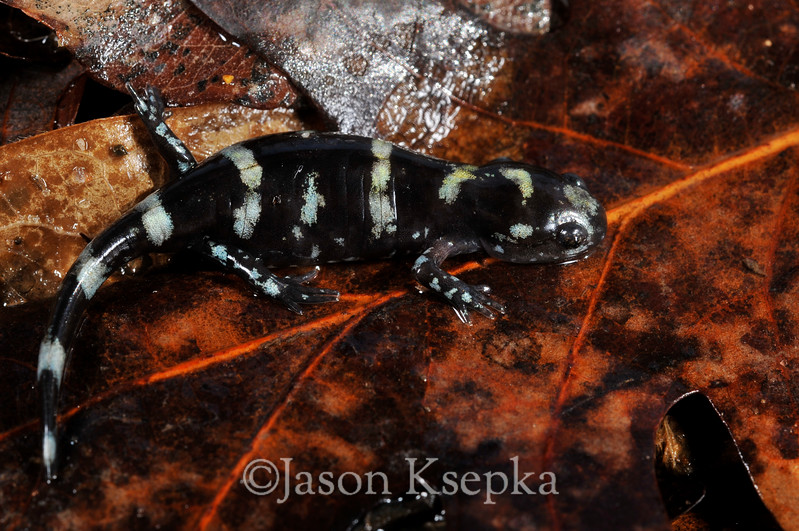 I have been told by local sources and far away folks, via the interwebs and phone, that annulatum, along with the other "small-mouthed" Ambystoma such as cingulatum, texanum, and others, are impossible to keep past the metamorph stage. Every source told me the same thing... the larva do great, just like macs, and tigers, but as soon as they get out of the water they just starve. I just got a reply to this post on another forum from someone who says they can be kept well into adulthood if fed small slow foods. Well, I am not sure yet, but I am pretty sure the two left are eating whiteworms. I saw one last night apparently swallowing something shortly after I dropped a blob of worms near its head. Not a direct positive observation, but close, I'll try to confirm in the coming weeks. Looking at the 1st one, it sure is fat for a mander that hasn't eaten for well over a month since it was a stressed out larva. I am optimistic, but not convinced, so I'll do my best to watch closely for feeding behavior. Keep you all posted if I see anything interesting.
Top

they can be raised pretty easily on small crickets and termites.. I morphed a few texanum and they thrived on them.
Top

I'm not even a gummy guy, but that is an awesome post!
Top

Congrats on what you have accomplished and learned!