I've only seen fleeting glimpses of Porcupines and I've targeted them out West a few times. They're uncommon around my area. I have been told that their eyeshine is red and is distintive. I've only managed the posterior view a handful of times. Do you guys know what time of night is best, I've been told late night say 2 am or later is best and I've spent a few nights out targeting them. Let me know if you have any tips or tricks.

I usually find them pretty easily by road cruising soon after dark in central Michigan. Most of my experiences are in the summer as that's when I camp the most. The only ones I have seen late at night wandered up to camp fires I was sitting around. 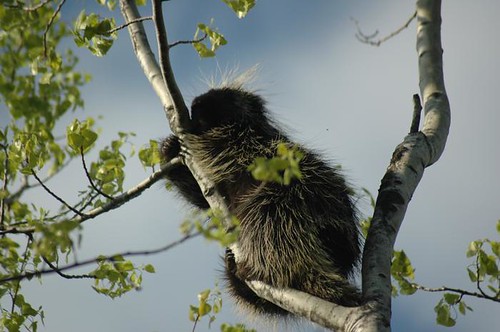 Javan Porcupines at Pangandaran NP by checking in caves.

I hope this helps,

I agree with Curtis. Nearly all my porcupine sightings have been road-cruising as night, but all mine were in PA (one day time roadcruise in Maine). I also woke up one night in a tent and went out to take a leak and a Porcupine was right at my tent door. he just turned around and slowly waddled off into the night.

You can also try leaving salty things around.
Top

I've seen a lot of these little pin cushions. When I was a kid my parents let my brother and I run wild in some canyons behind our house, morning day and night, and all year long. We always did well finding them by finding tree branches that had been chewed on, and then look for tracks and follow those to the next tree. Some times we had to follow the tracks from many trees before we found the tracked animal.
We would often find a porcupine on the ground and then I'd take off one of my gloves, and put it on a longish stick and poke at the rodent with the glove to get its tail quills. I had a jar filled with the quills that I later in life (high school) used in an art class to do quillwork on a pair of leather gloves. I don't have the gloves any more, I gave them to my granddad who was a big time horse man, and he loved them but wore them out.

I used to see porcupines on the roads in Northern California, in the redwood/douglas fir/tan oak association. Also in the surprisingly dry high desert areas with junipers and sage. Not enough to discern a pattern. An adult with a baby attracted a lot of attention in a campground.

Quills are pretty, and a part of some really beautiful native american art. I used the quills (quite long, I imagine from the South american species?) for fishing bobbers when I was a kid. They were ultra-sensitive, any fish foolin' with your bait was easily detected by the quill being pulled under. I have not seen them sold for years...I wonder if they are still available? For bait fishing, they were hard to beat, and little kids learning to fish just get excited and crazy watching a bobber dancing around...the porcupine quill the best I have seen. I have also seen some animals horribly damaged by porcupines defending themselves from attack...a bad way to go I would think.
Top

I found Malayan Porcupines in Khao Yai by poking around the spots other people were staying in at night.

In order for my wife to see one too, I later baited one to our place (set up a little food trash on a bench with empty water bottles to fall off and make noise when it grabbed the trash).