In 2008 I saw Igancio Yufera’s trip report for Sulawesi and decided I must go there. My main goal was to visit Nantu Forest and see some Babirusas. I arrived in Manado on New Years Eve and headed to Bunaken National Marine Park. I did not see much mammal wise on the island except fruit bats, but it did have some of the most incredible snorkeling I have ever seen.
After a couple days I headed to Gorontalo to arrange my trip to Nantu Forest. It was 12 hours in the back seat of a van with 3 other people. Luckily they dropped me off at a great guesthouse with beer waiting. I met Andy that night, who was an expensive, but excellent fixer. I ended up paying him and his friends $50 for setting up the Nantu trip, but it ended up being worth every penny. They took me to the permit interview and got me a permit for about $5, rather than the $100 I later learned most people have to pay. The permit people sent me to a mandatory Forest Service Guide, who ended up being quite good. I would have never found the place without him. After a full day of travel, involving a hired car, a motorbike, a boat, another motorbike, a hike, and finally a swim across a river, we arrived. 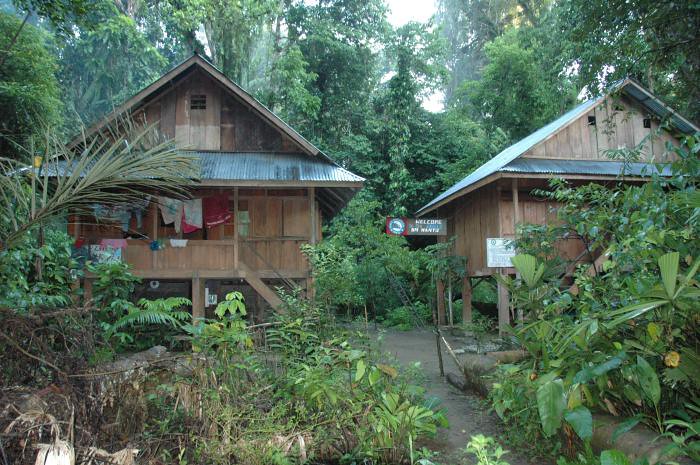 These are the young men who guard the place. 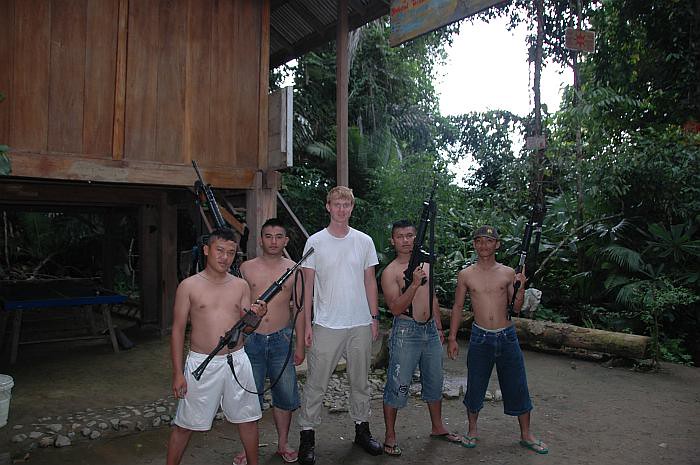 This place looks pretty remote, but it is now right across a small river from a Javan Transmigration community. They are muslim, so they don’t hunt the Babirusa, but they do crop damage, so they don’t like them. The gaurds are Christians from Manado, and there seems to be some friction between them and the village.

The main attraction here are the salt licks. There is a two story blind above it and you can sit on the ground or elevated.
The top view. 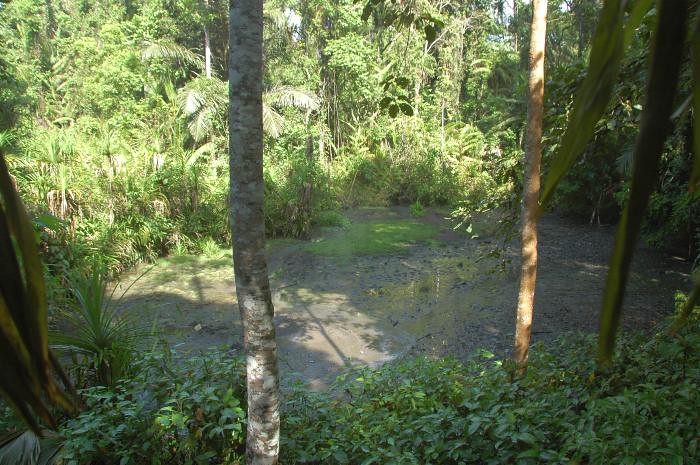 The next morning we headed to the blind and soon began seeing Babirusa. 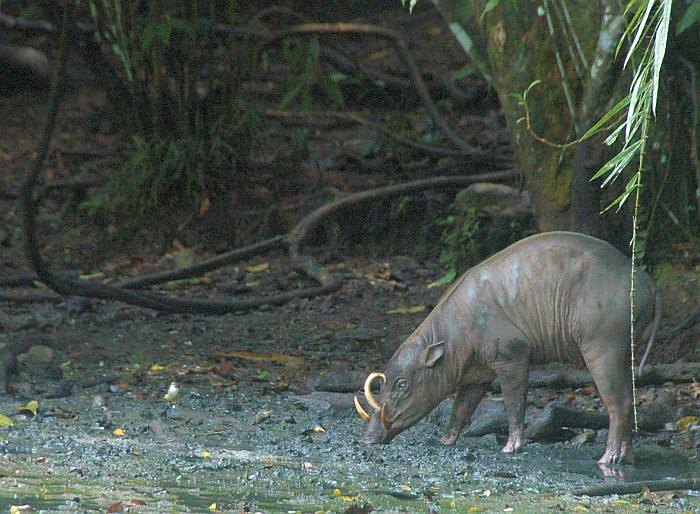 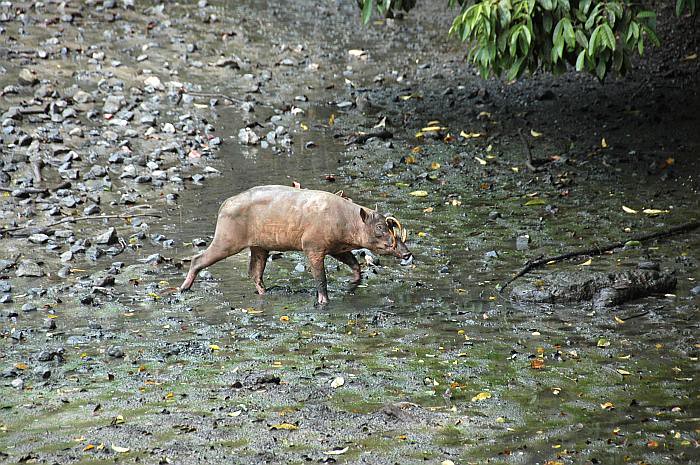 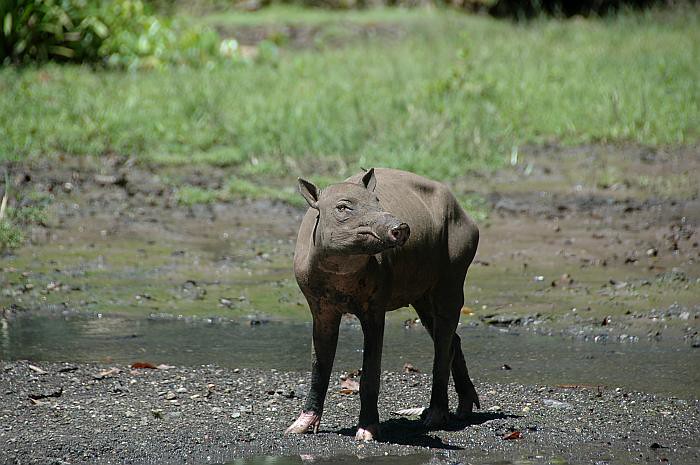 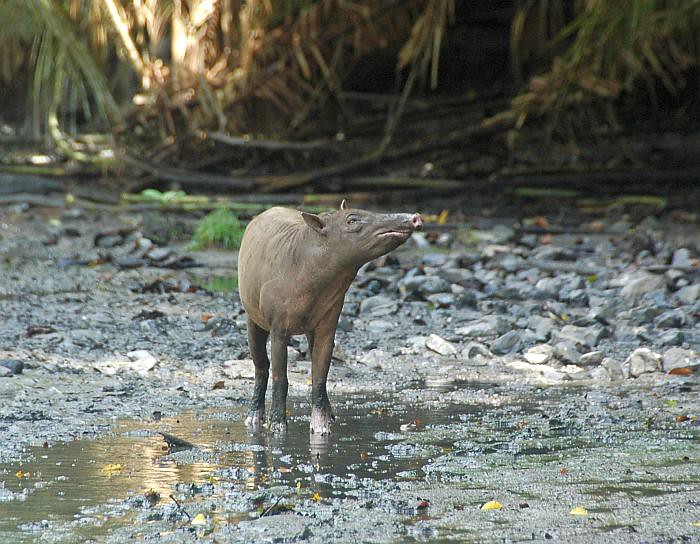 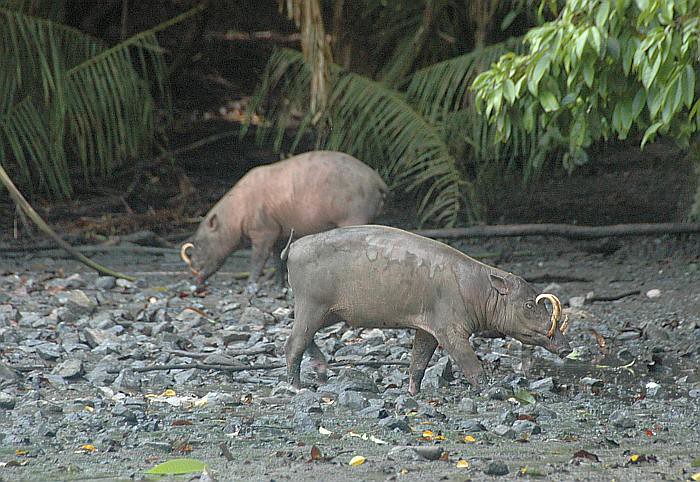 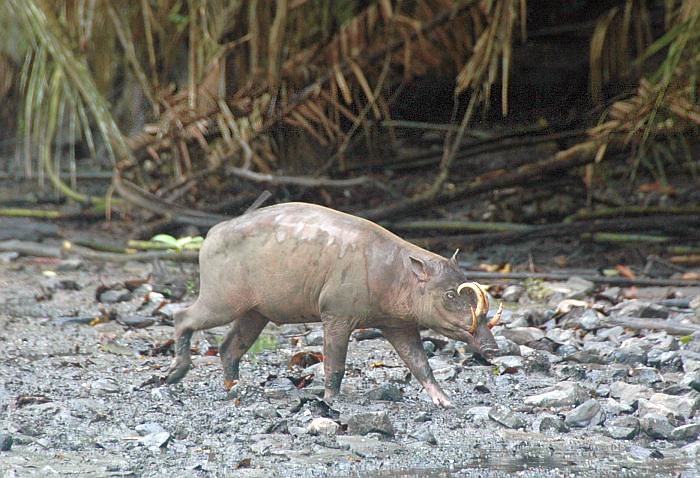 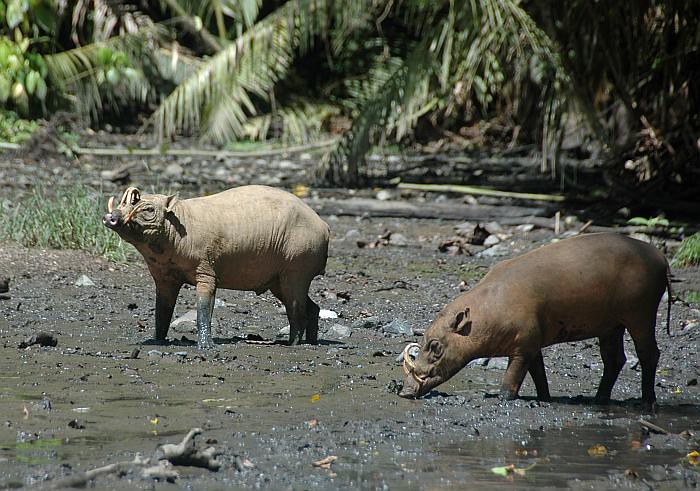 I spent 3 nights and 2 days here. I had 36 Babirusa sightings. Biki, my guide said I was extremely unlucky, most people see much more. I heard Tarsiers at night, there were Heck’s Macaque, Sulawesi Wild Pigs, and Timor Deer around as well. I was not able to get a picture of any of them. I was hoping to see a Lowland Anoa, but one never showed. I did not get the best look at the Sulawesi Wild Pigs either.

I arrived late in the day back in Gorontalo and boarded a ferry to the Togean Islands. I stayed on Kadidiri Island at first and saw Babirusa tracks and some Inshore Pantropical Spinner Dolphins. I then moved to Malenge to track down some of the interesting mammals. My goals were Babirusa, Togean Tarsier, and Togean Macaque. I’m not sure the 2 primates are actually endemics, but they may be. I tried for over 4 hours a nighy for 5 nights, and heard but did not see the Tarsiers. I did have a guide show me a Babirusa and the Macaques. The only mammals photographed were some bats in a cave. Any Id help would be appreciated. There is a report on the bats of this cave, but I can’t find a place to get a copy. 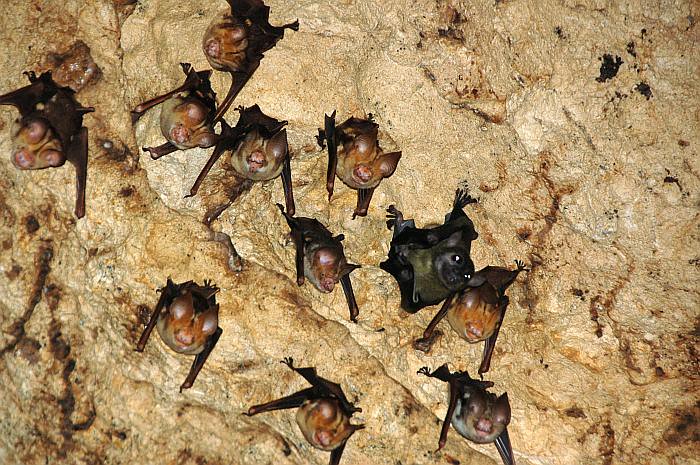 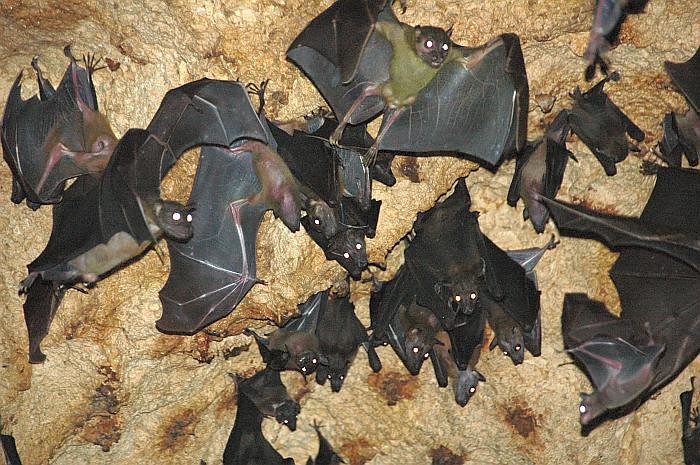 The next stop was Tangkoko National Park. This park is known for its Black-crested Macaques and Spectral Tarsiers. Guides are mandatory and my first one was not very useful. We did see the macaques pretty quickly. 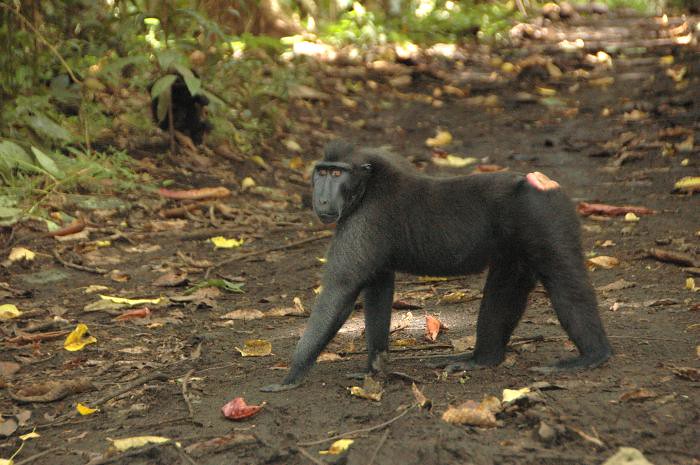 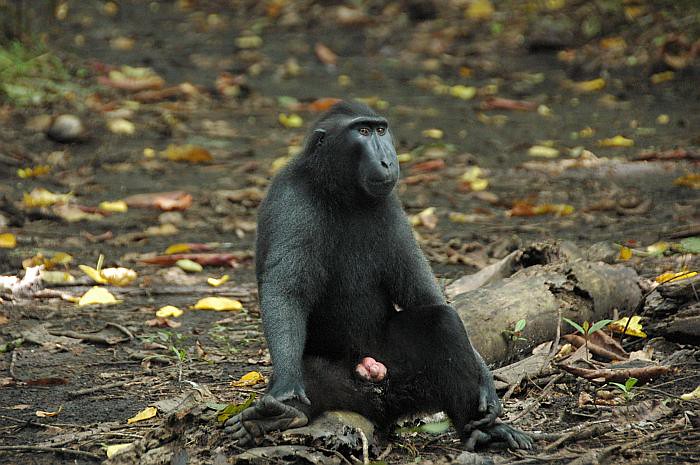 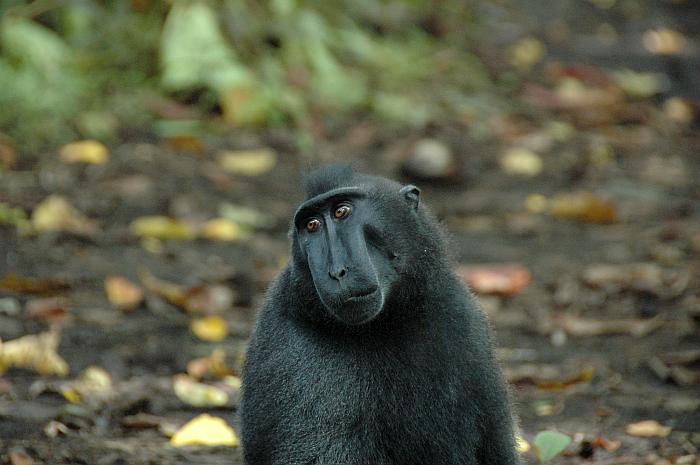 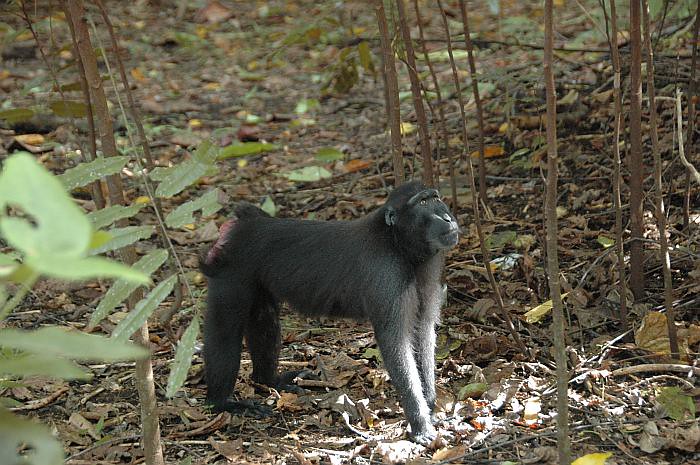 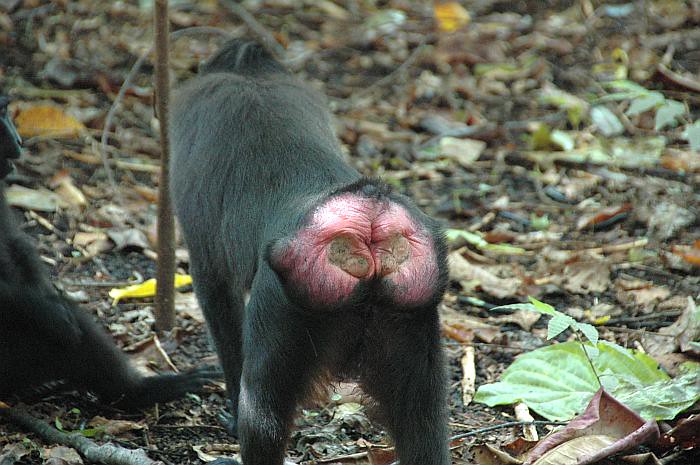 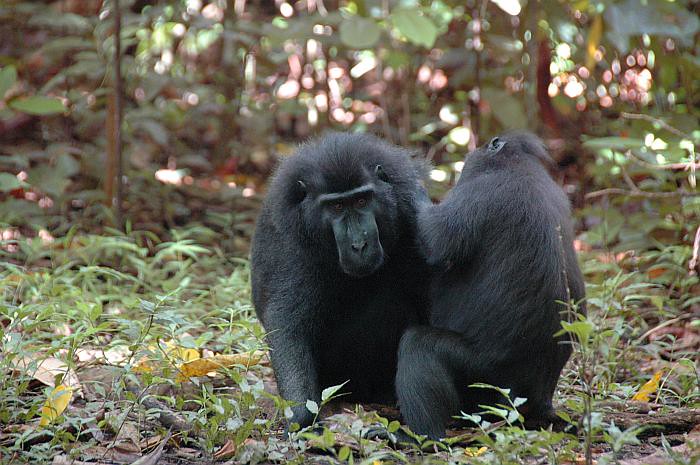 The Spectral Tarsiers always sleep in the same Strangler Fig, so it was only a matter of being there at sunset to see them come out. 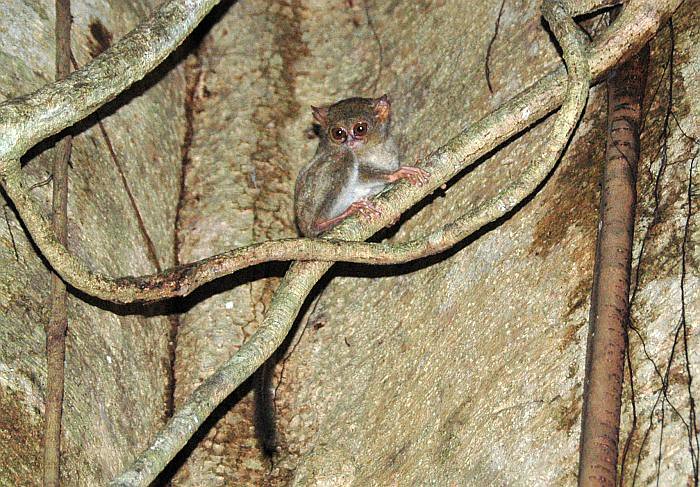 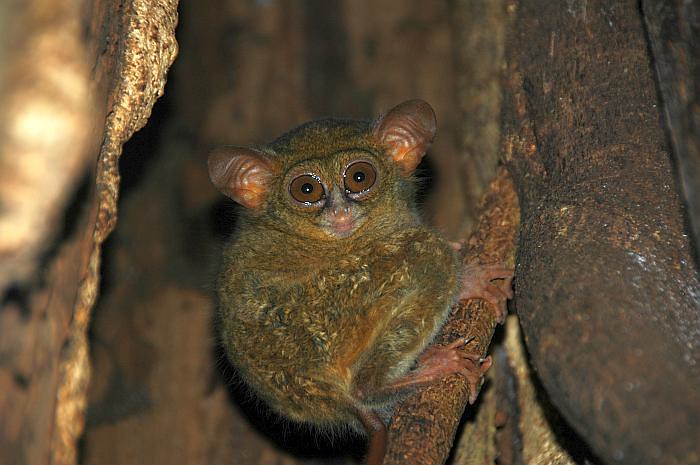 Bear Cuscus were about and I was able to see a few during the day. 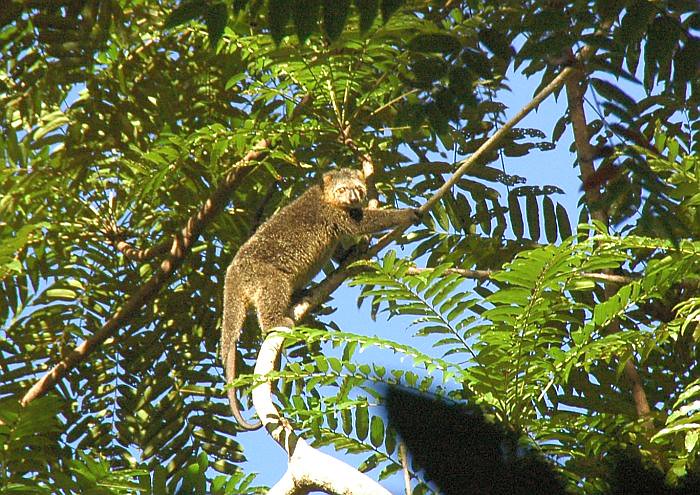 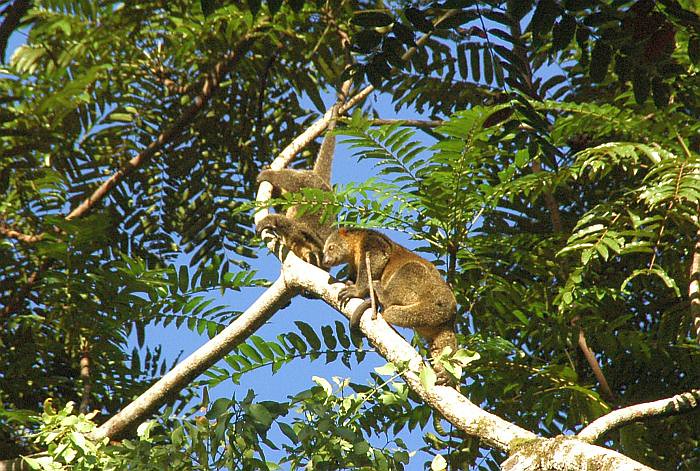 Northern Sulawesi Dwarf Squirrels were about. 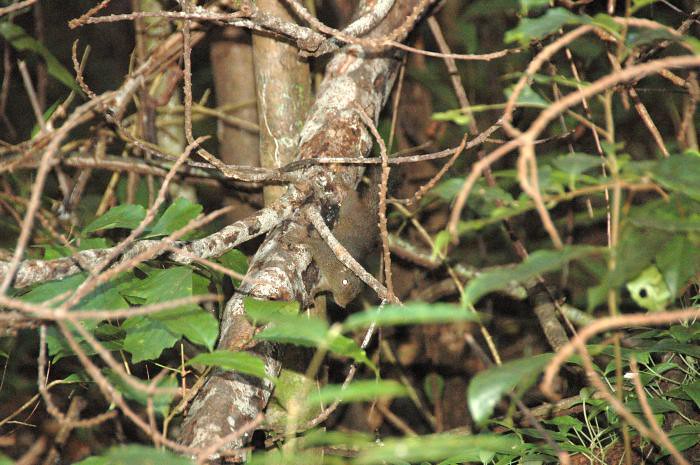 These Lesser False Vampire Bats were inside a hollow tree. 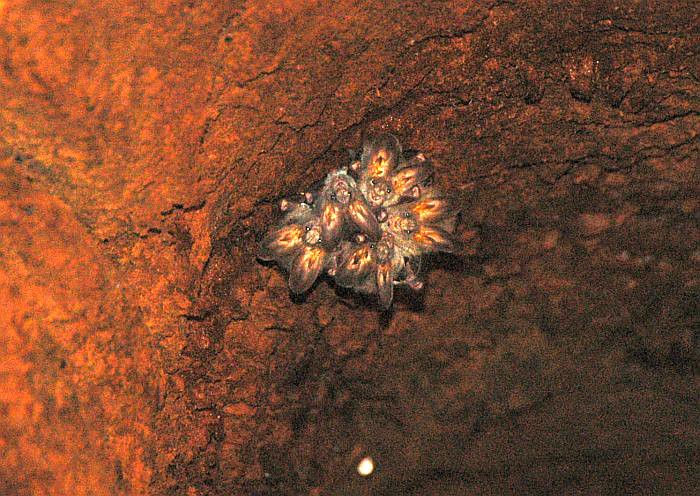 There was an Anoa skull on the wall in the ranger station. I asked the lead ranger what my odds of seeing an Anoa at Tangkoko were. He said “If you go into the forest you may find an anoa or you may find god. The odds are about the same.” I didn’t find either of them. 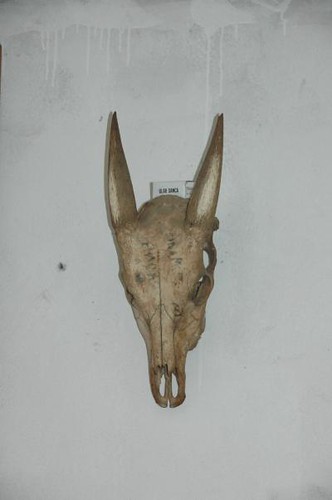 All and all a great trip. This was one of my favorite places I have ever traveled to. I hope to return some day.

Amazing animals. Such an exotic location, with such gruelling travelling to get there, that I don't know what to say.
I'm glad you went, but I'm not sure I would enjoy it.
I could be alone on this, but that may be why you haven't gotten many comments on such an amazing post.
Top

I didn't even know those existed! Those are some awesome looking creatures. Thanks so much for sharing these photos. You went through a lot to get them!!

Thanks for the replies.

Warren - The travel to get there probably isn't that bad at this point. There is a paved road all the way there now. The only reason I had a rough trip to Gorontalo was that I didn't know I could quite reasonably buy a whole row in a van. Lesson learned.

KingCam - The guys were pretty safe with the guns most of the time. I think his finger was on the trigger for the picture. Most of the time in camp they were either cleaning them or they were stored. The guns were mainly for patrol. The only thing I found questionable was that they took them to the bar and left shooting up in the air at midnight.
Top

Curtis Hart wrote:KingCam - The guys were pretty safe with the guns most of the time. I think his finger was on the trigger for the picture. Most of the time in camp they were either cleaning them or they were stored. The guns were mainly for patrol. The only thing I found questionable was that they took them to the bar and left shooting up in the air at midnight.

O_O Yep, the shooting into the air would have made me pretty nervous, hahaha
Top

Warren wrote: I could be alone on this, but that may be why you haven't gotten many comments on such an amazing post.

I think there isn't many comments mostly because it was posted originally before the crash and the comments were made then. Or it is jealousy... sheer and utter jealousy of Curtis' nomadic, wildlife-viewing ways.

This post is just as awesome this time around.
Top

Awesome is a good description of all of Mr. Harts posts!!

A really interesting post and great photos as usual. I would love to visit this part of Indonesia someday. The chance to watch and photograph Babirusas is a strong draw and I would say worth the discomfort of the journey.

You mention hearing Tarsiers at night, was that the sound of them moving through the leaves or were they actually calling? (This leads to the next question - what does a Tarsier sound like?) I have never seen Tarsier despite going out with a guide to "a good spot" near the Kinabatangan river in Sabah. The guide mentioned a strong smell that accompanies them as they move around the forest. Did you notice any particular aroma around your sightings?

Thanks for posting this. Rags
Top

The discomfort most likely no longer exists due to improving road conditions. You could also fly into Gorontalo and eliminate the long van ride.
Spectral Tarsiers do have a call. It is high pitched and insect-like if I recall. I do not remember a strong odor. The tarsiers I saw were all from the same strangler fig in Tangkoko NP. I'm not sure if Western Tarsiers call. I have never heard anything about it or heard them, and I have spent a little time searching for them. Maybe Hans will chime in, I know he has experience with them.

Now that's an adventure. Animals I've never heard of, belligerent locals, and the mother(f***er) of all journeys to get there in the first place. You're a truly driven man, Curtis, and we all benefit from it

I agree with Hans, awesome adventure! Thanks for sharing the post. I might have to find a way to get out there, that is some cool stuff.
Cheers,
Roki
Top

In reference to your bats, the smaller bats are some form of Horseshoe Bat. Looking online there apparently is Sulawesi Horseshoe Bats (Rhinolophus celebensis). I am certain of the group (Horseshoes) but it may be a different species as there are a ton of them!
The others are some form Fruit Bats (as I am sure you already know). Once again there are a huge variety of species. BCI has a really good write up about Fruit Bats found specifically there.

The primates you encountered are unbelievable! And awesome photos to boot!
Top
Post Reply
13 posts • Page 1 of 1