Well, no one has posted pics of herps in a while, so I thought I'd throw up some pics Nicholas took on a recent hike in the San Gabriels. 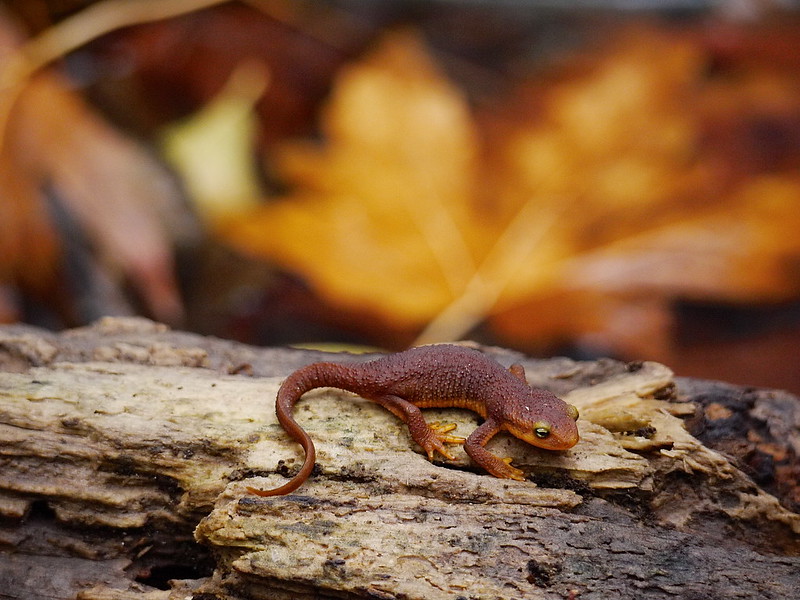 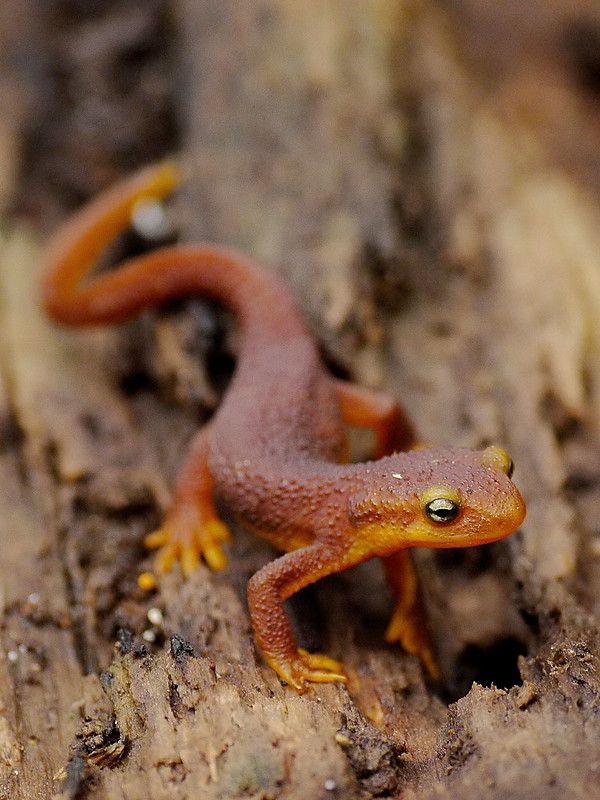 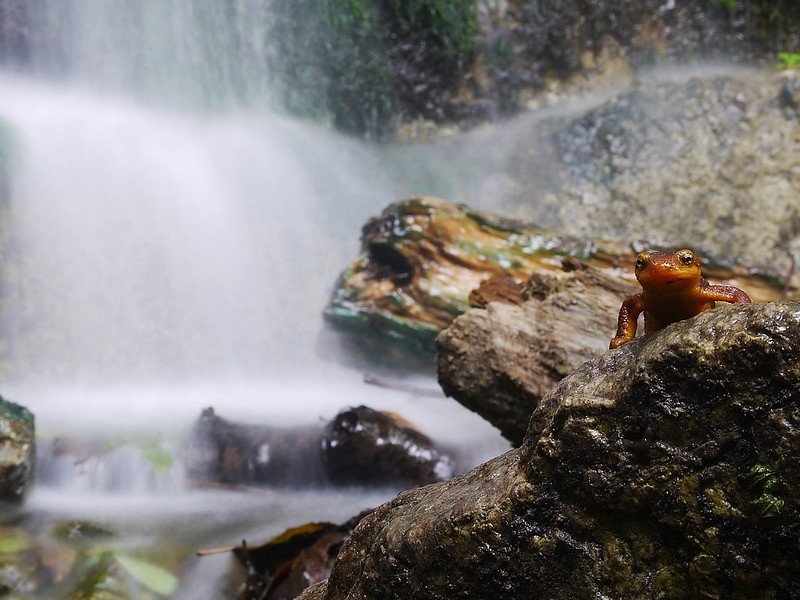 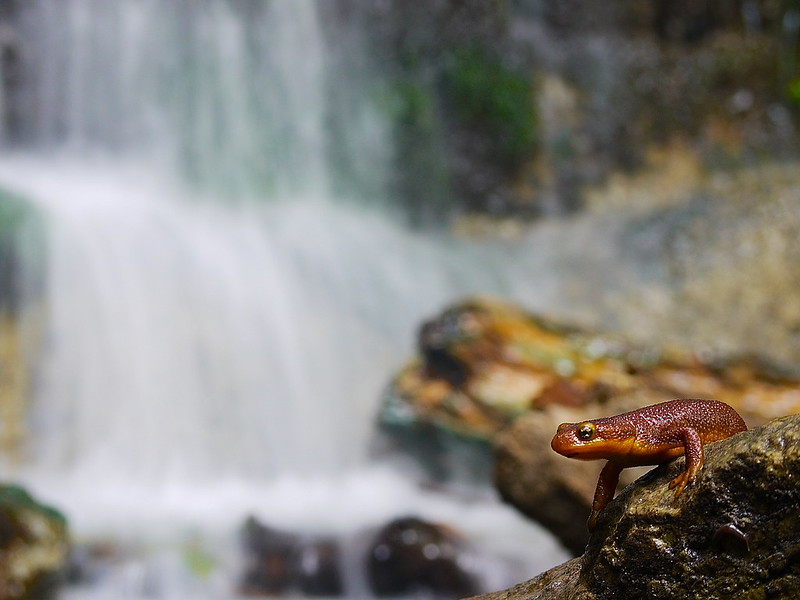 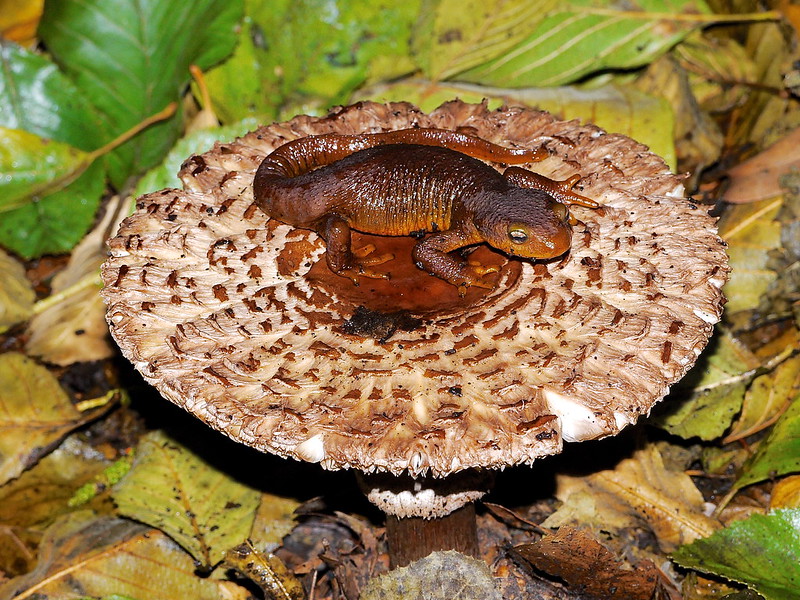 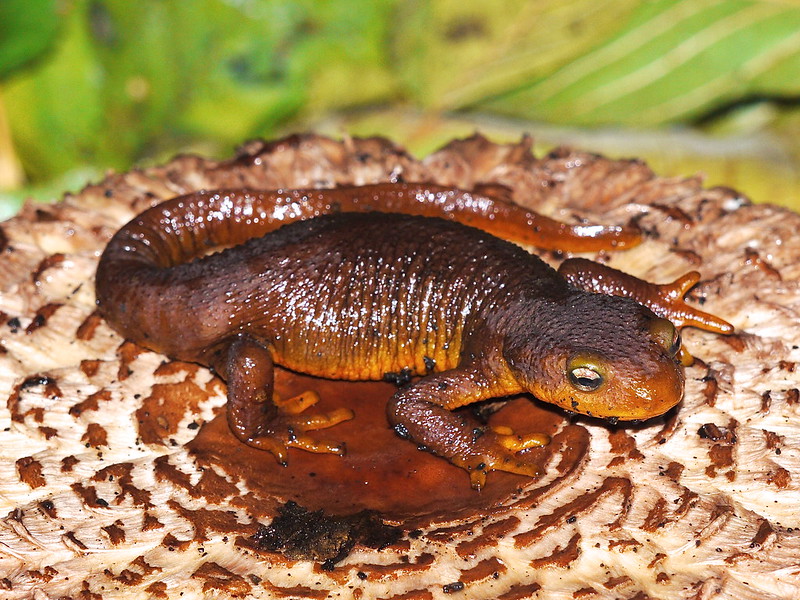 As expected, conditions were still very dry, and we found no Slenders, Ensatina or Arboreals in about 3 hours of flipping logs and rocks. Nada. The Newts were all seen on the crawl. All three were unusually cooperative, producing some of Nicholas's best Newt shots yet.

Greg: This was in "your" canyon

No bears, though. Actually, come think of it, I saw this Bobcat there in August: 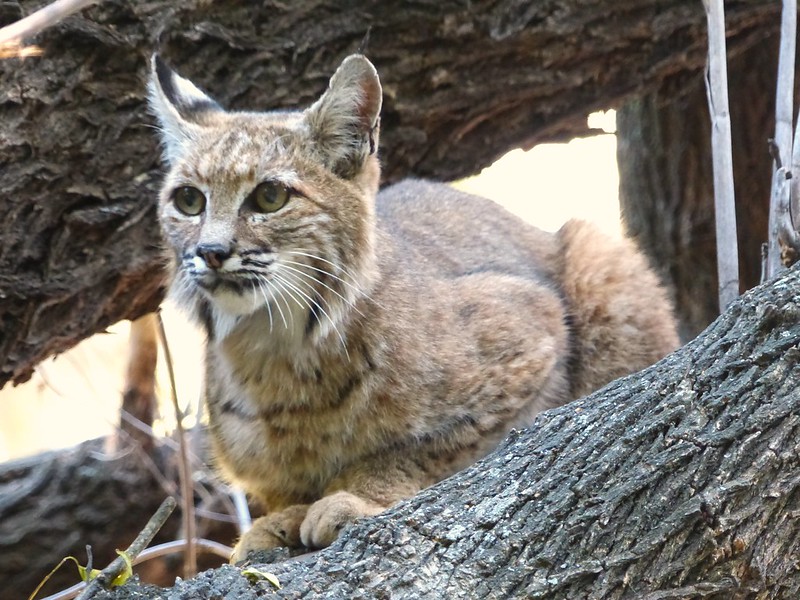 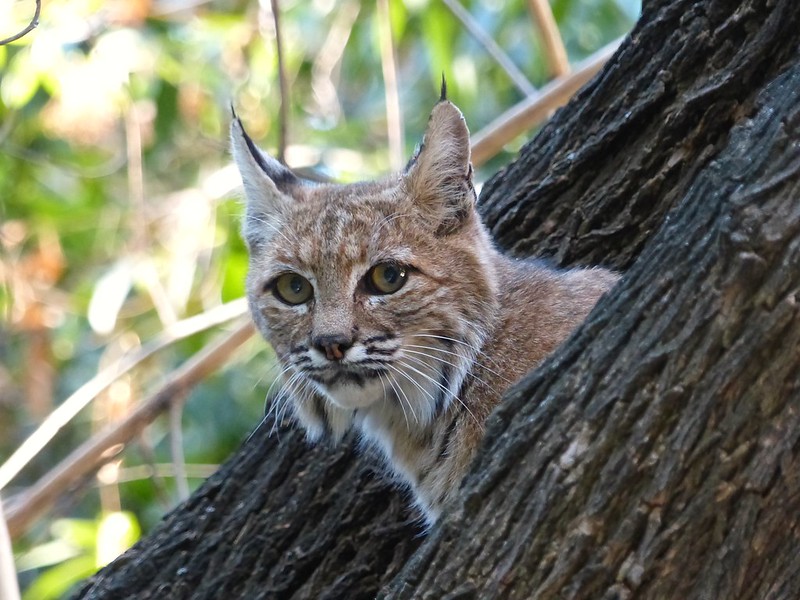 The cat was sitting low in a tree stalking a squirrel, holding that position for several minutes, allowing me to get really close (within 10 feet at some point). I note that these are even my own shots. Nicholas and friend took a different path for just a few minutes and missed it. He was pretty bummed

Anyway, it felt good to get out on the first salamander hunt and we are ready for more.

Those bobcat shots are awesome.

I've seen 4 bobcats in my life, but was in my car all 4 times, which isn't nearly as cool.
Top

I have yet to see a Newt, in So Cal, but perhaps I'll get lucky today down in (probably) the Santa Ana's...

I really enjoyed this post, Fellas. Looks like you guys beat us NorCal-types to the first salamanders. JimM found a Batrachoseps., if that counts.

Nicholas - Great newt pics. I really like how the newt/waterfall shots came out; they're amazing

Robert - I'm happy that you were able to have such a memorable close encounter. The pics are fantastic! I especially like the close-up/head-on shot; it's a spectacular photo!

Thanks, everyone, for the kind words.

Like you, Jim, I had the day off today and, predictably, headed back into the woods

- without Nicholas, who had to go to school.

This time I went to two canyons nearby right here in the Verdugos. The temperature was 58-60 degrees with sunny skies. In the second canyon, I went to check the spot where we found the Monterey Ensatina in August of 2012. It's at the lower end of a stream that seems to be flowing year-around, though it's only a trickle most of the time. 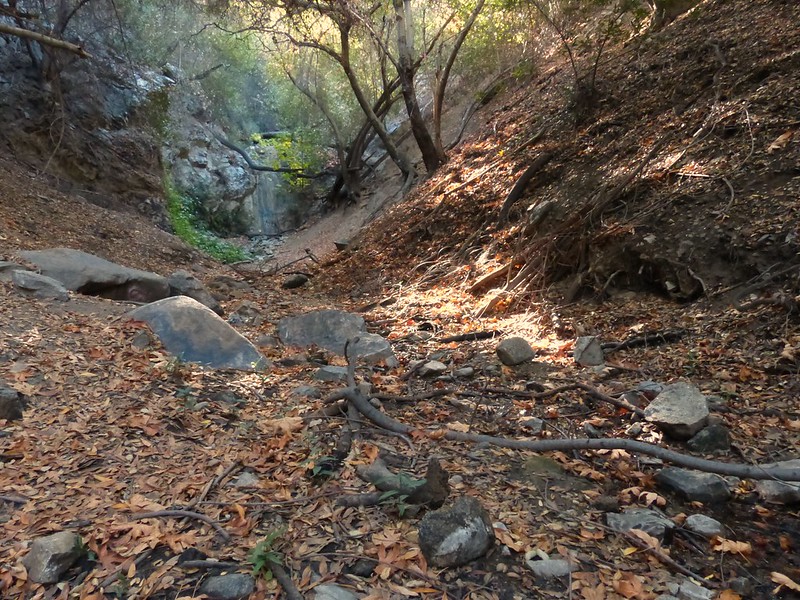 If it weren't for the graffiti on the wall of the "waterfall" (shown in the background), it would actually be a beautiful place.

But because it's very accessible and we are, well, in LA, graffiti and some attendant trash is unavoidable.

The good news is that I managed to flip four B. nigriventris at the spot. Here are three of them: 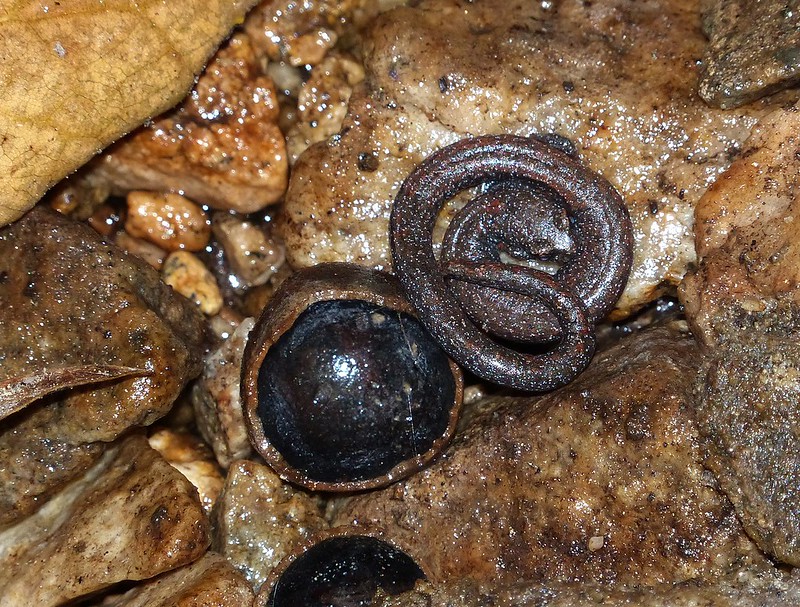 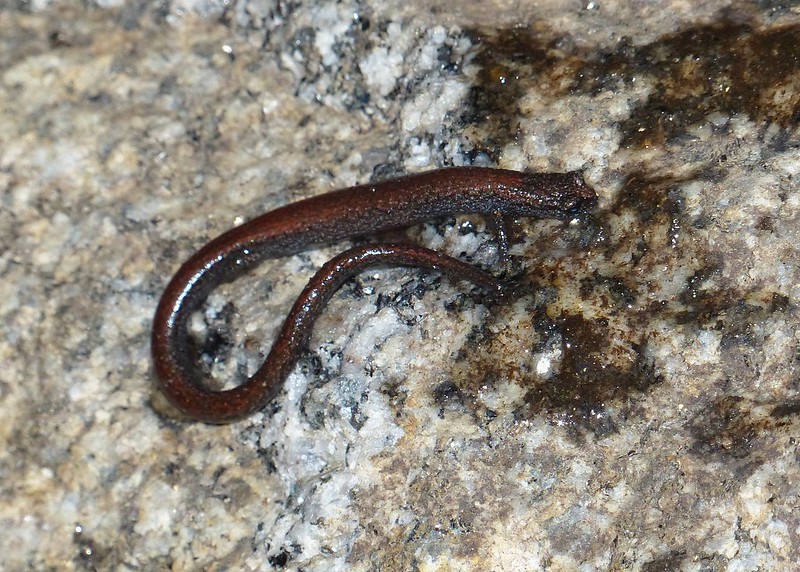 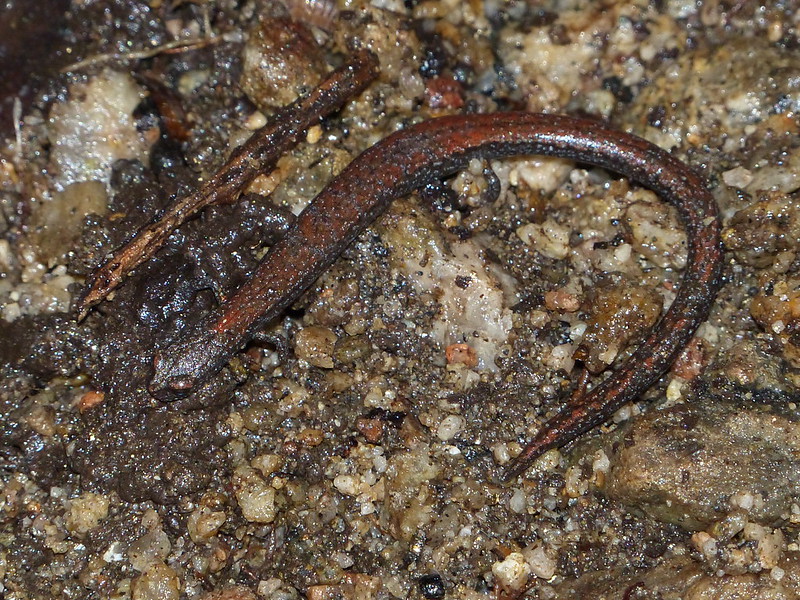 So, now we are two for four. Of course, the other two are really the hard ones, but, hey, as the title of the post says, it's a start

In the other canyon, which also has a small stream, but it was dry, I saw three subadult Fence Lizards, but could voucher only one: 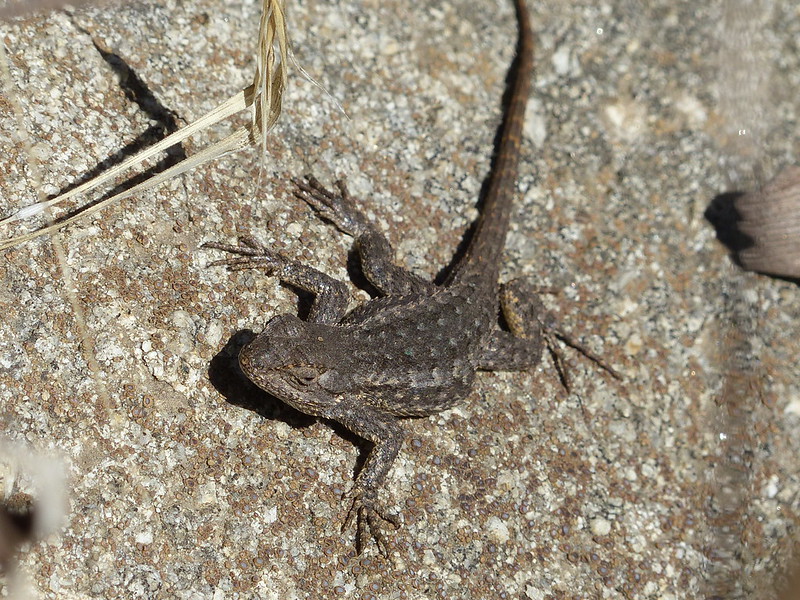 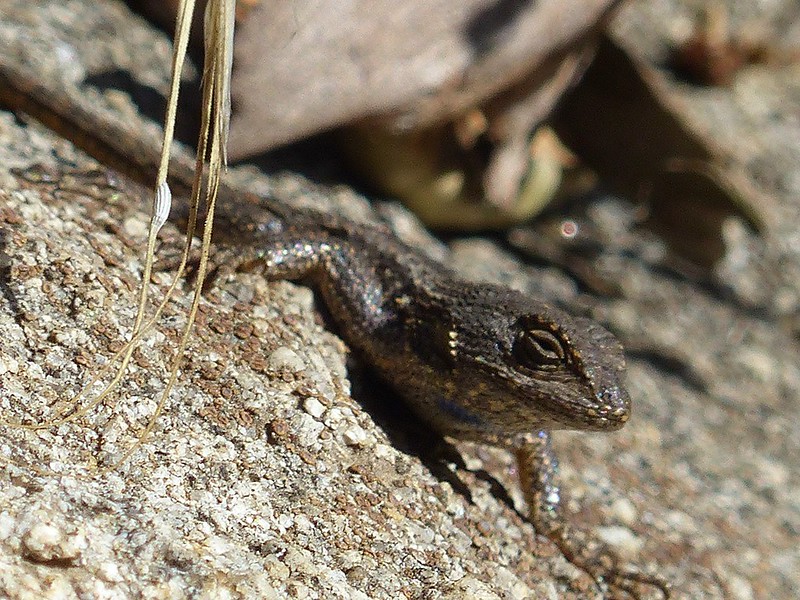 In any event, I love getting out in the middle of the week on a beautiful, sunny day. I also got a good workout flipping rocks in the creek bed and felt great afterward. That's how every day should be. Hunt, eat, sleep.

) so I went to Riverside, to look for Garden slenders and/or anything else that might turn up. I would have much preferred herping with you and seeing blackbellies.

Well, it sounds like your day wasn't so much different from mine. You got Skiltons, which I didn't (though I was looking), and I got Slenders, which you didn't. The bottom line is that it's not easy to find a lot right now. Too cold for snakes/lizards, too dry for amphibians. So, I hope you still enjoyed your day in the woods. It certainly beats a a day at home or at work.

Really good newt pictures!
I am jealous of those slender salamanders. The only slenders I have ever seen bounced away like coiled up pogo-stick into the litter and I never got to voucher them

My sprained ankle (and FINALS) prevented me from hard core hiking or extensive herping for salamanders unfortunately, but I did walk three newts from the last few rains. Next week I will make up for the lost time and will find some salies for sure.

btw...
Those newts shots with the water fall were in "my" canyon?! The rain must have treated the falls kindly because it never looked so great during my time there. Will check that place out friday now.
And Robert I would happily trade a bear for your bobcat!
Not a great image of a bear in "my" canyons. Did not have my good camera, it was dark, and my girlfriend was telling me to leave it alone so we can go to the movies (which I did promise her)

Is that bear doing what bears are known to do in the woods?

Greg (if I can call you that)... has it been your experience that newts are strictly found in creeks (in the Gabes) or might it be possible to find them in a vernal pool? I have one I want to check for them, Spadefoots, and whatever else might be there (I know Baja's are) thx... jim
Top

Ah, man, you saw another bear. That's what Nicholas and I had sort of hoped to see there. Always a long shot, of course. In any case, the bear beats our Slenders and Newts hands down

@hellihooks: You can call me that, in fact I prefer it. Hindsight is a cruel teacher and I have been regretting the name gopher since day one

In my personal experience I have only seen newts in, around and on the roads surrounding creeks; let alone finding a vernal pond in the gabes.
Which side of the gabes did you want to check for them?

As for the bear you are right, I BEARly believed it! To make matters worse I ended up steping in bear poop looking for salies, my friend had to BEAR the burden of stinky ol me too.

@Robert: Look for someone who leaves food in their car, it is the running gag with me as half the bear sightings I see are food orientated.
Call me crazy but I think a slender would beat a bear, especially since I have been skunked so many times trying to find them. Next time you and Nicholas dress up as me and the bears will come...but don't expect any salamanders after that!

The pond's on the coastal slopes, but at the eastern extent of the range. I do think there may be spades... with newts a long shot.
it's a lot bigger than it looks... perhaps 25 ft in diameter, even mostly dry.

As I said, I have found Baja tree frogs there...

I've seen newts in a variety of habitats, up north, including open meadows, ponds, creeks, and redwood forests, but have yet to see a 'so cal' newt. jim
Top

Jim, I just a took another look at Taricha torosa on CaliforniaHerps and it clearly shows habitat pictures (taken in Alameda County) of what look to me to be vernal pools/cattle ponds. So, it appears that coastal newts at least CAN live in bodies of water other than a flowing stream. However, I doubt that small vernal pools would be viable habitat for newts down here in SoCal. To begin with, there aren't many vernal pools left, nor, I assume, were there ever as many as in NorCal. Second, we get much less rain to re(fill) whatever few vernal pools there are. In many years vernal pools remain completely dry. It may also matter whether vernal pools are situated nearby streams with healthy newt populations. They have to arrive from somewhere after all.

But, if your vernal pool meets these criteria, who knows, maybe it does hold Newts. This time of the year, they are on the crawl a lot, so you may be able to walk one. Then again, I've only seen them on the crawl in shady riparian habitat, usually on leaf litter, very different from a vernal pool with full exposure to the sun.

A spadefoot seems like a better possibility to me there. The only one we've ever found lived in wide-open grassland near the edge of an artificial pond.

Let us know what you find

yeah... but it also says: In southern California, drier chaparral, oak woodland, and grasslands are used.

There are some overgrown seasonal creeks nearby, and a larger drainage going up the canyon to high elevations. I just don't know if any newts have ever been found as far east as (or further east than) Lylte Creek. It would be a county record...so worth a look

Phil and I found our lifer Spadefoots a few mile east, in the berdoo's so got a good feeling bout them...

My only problem is when to go... daytime for newts, or at night in a rain, for spades...

hey jim, ive been looking in that area this year for newts as well, been skunked so far, as far as I can tell there are historical records for lytle creek area, big bear, san gorgonio, whitewater, and an obscure record out in the middle of the Mojave !?1? not sure what is up with that though.It seems odd that they aren't all over the berdoos and san jacinto for that matter, weird how distribution works sometimes. I am also told that there are san gabe slenders in the lytle creek area. good luck!

Yeah... it's weird how different the gabes and berdoos are... no rubbers in the gabes... no aboreals/newts in the berdoos

If you're talking about B. gabrieli in Lylte... that sounds right.
Years ago, (back when I called all slenders 'Worm Salamanders'

) I found some small very dark (blk) slenders in a canyon in N. San Bernardino, which, at the time I thought were just dark gardens.

Jonathan H. had told me that Blackbellies, rather than stopping at the Cajon, could be found at a few places along the berdoo's so I've been searching for BB's along the berdoos ever since. NOW.. I read (Ca Herps) that B. gabrieli although only known from 13 locations, can be found in the berdoo's as far east as the 18...

I think Jonathan may have been confused, for one of the localities he suggested for BB's is listed as a B. gabrieli locale. There is an equal to greater chance that it was I, who got confused.

I now suspect the ones I found were B. gabrieli ... sure wish I had had a camera back then...

this just makes me want to redouble my efforts... cause well... I've vouchered Blackbellies

(gotta recheck those pics too, now that I know B. gabrieli can be found with BB's