Hello, it's time for a Spring herp survey of the Yolo Bypass. I served as the manager of the Yolo Bypass Wildlife Area for 12 years and moved over to the Monterey Bay Coast aobut 4 years ago. At Yolo, we'll be looking at coverboards I placed at three separate locations.

Bring water and lunch. We'll carpool to the sites, and there will be opportunities to leave early if necessary. I'll be leaving from Monterey County in the morning. Contact me if you would like a ride from Santa Cruz or Santa Clara county.

Here are some examples of what we might see: 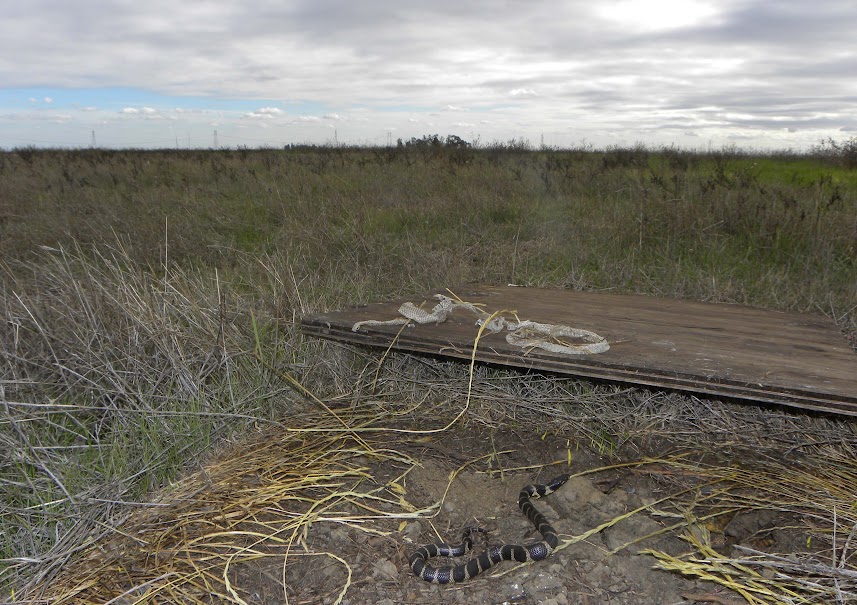 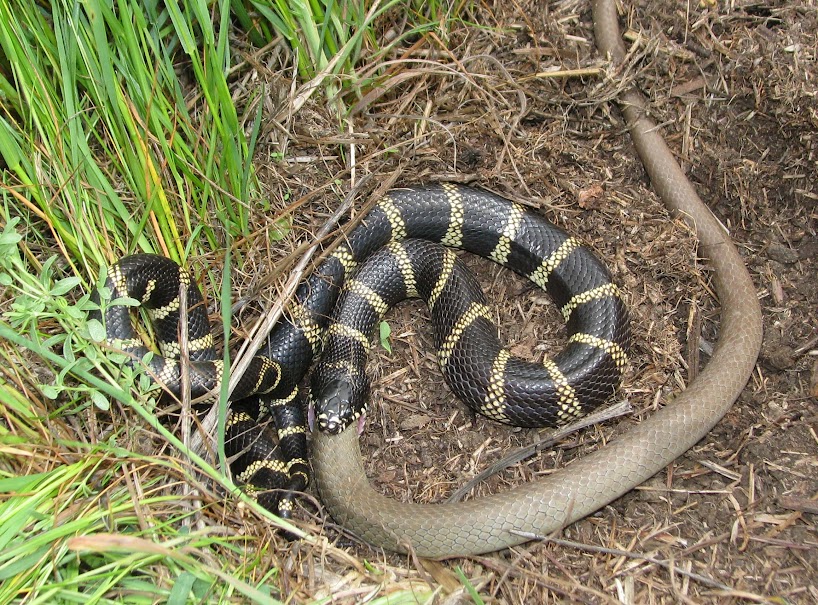 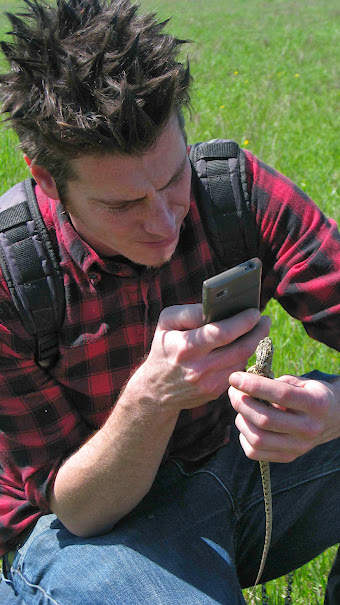 Thanks, hope to see you.

Dave,
I'll be there.

Reminder for this survey.. For those that may want to attend.

Thank you Dave for having us again.

Really going to try and make this, but I have a return flight that might be just a little too late in the day.
-Elliot
Top

Thanks for goosing this Brian. We are going a week earlier this year, since things have been pretty dry over in the Valley.

Everybody is welcome. We have over 300 cover boards in pretty native Central Valley prairie land to check out.

I will try to make it out
Top

Once again we had a very successful herp survey at the Yolo Bypass thanks to Dave's efforts in organizing this event and his placement of hundreds of cover boards out in the fields. Most of my photos aren't worth posting, but here are a few:

Dave, up close and personal with a young Cal King:

Trevor Bass and Dave with a Garder snake, (first for this survey)

Dave and Michael checking out a Gophersnake. Michael works out at the Bypass and proclaimed that he saw more snakes on this trip than he's seen in his entire life! (We did see a lot of snakes!)

One of many Southern Gators;

We also saw quite a few Western Yellow-bellied Racers of varying ages.
Thanks Dave!
Top

Thanks to Lawrence, Trevor and Michael for your help yesterday in the Yolo Bypass. We had a great day in the field checking 3 cover board arrays first laid out in 2006 and another line put out in 2011. The total for the day:

The usual suspects but things were different. More Alligator lizards than ever before and seemed like less racers. Conditions were dry, looks like mid April out there. Water in the vernal pools. Few rodents and no Ornate Shrews.

Found a kingsnake pretty quickly. The belly on this specimen was light. 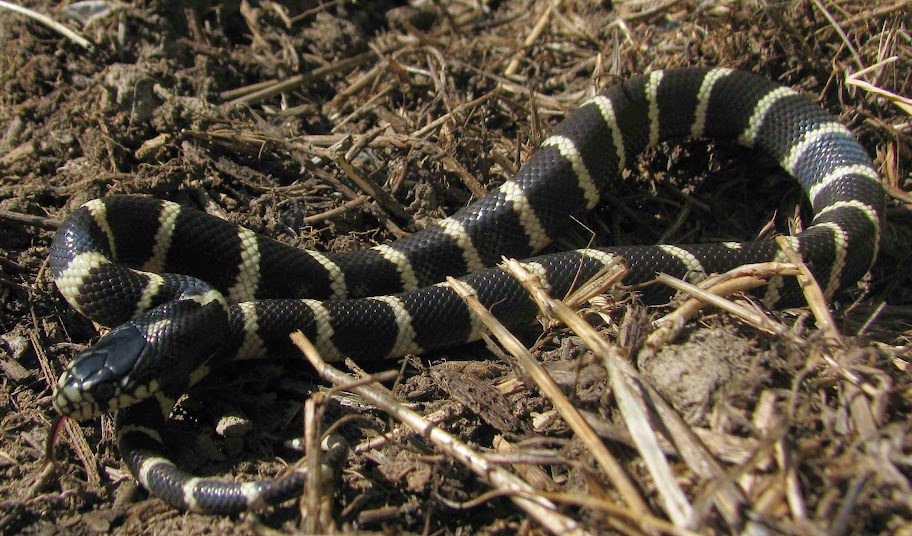 Trevor found this Valley Garter Snake on the crawl. This was a beautiful serpent foraging on the native Central Valley prairie. 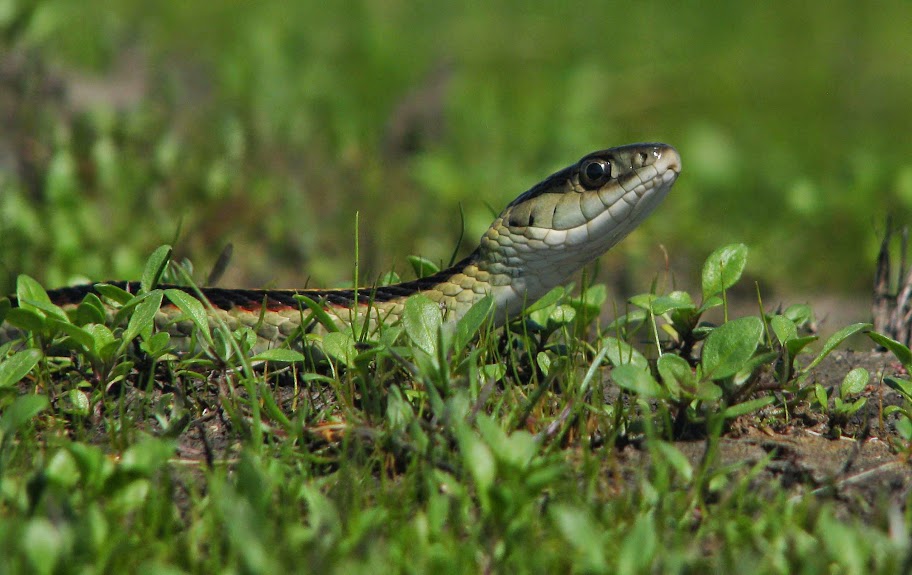 It took me years to find an alligator lizard in the Yolo Bypass. Now, with boards in the right place, we've found several. Most are pretty dark and well marked. 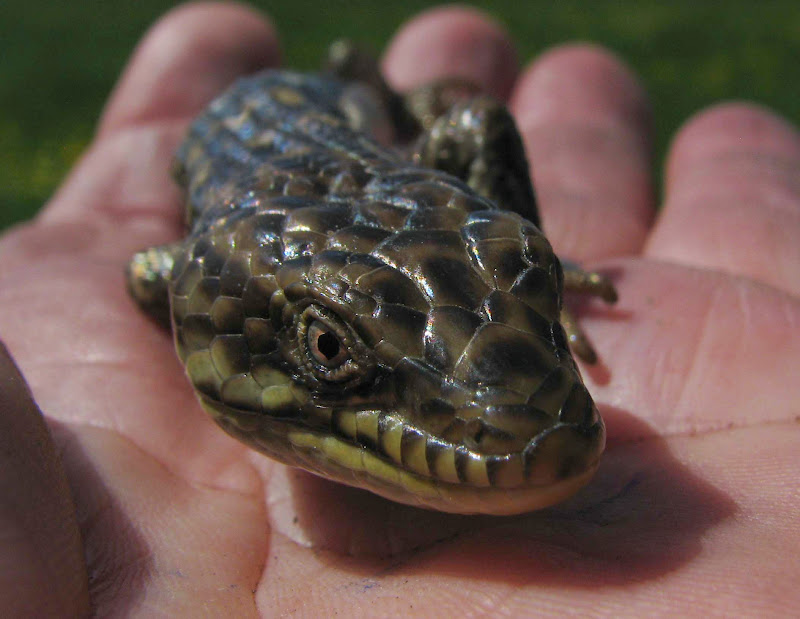 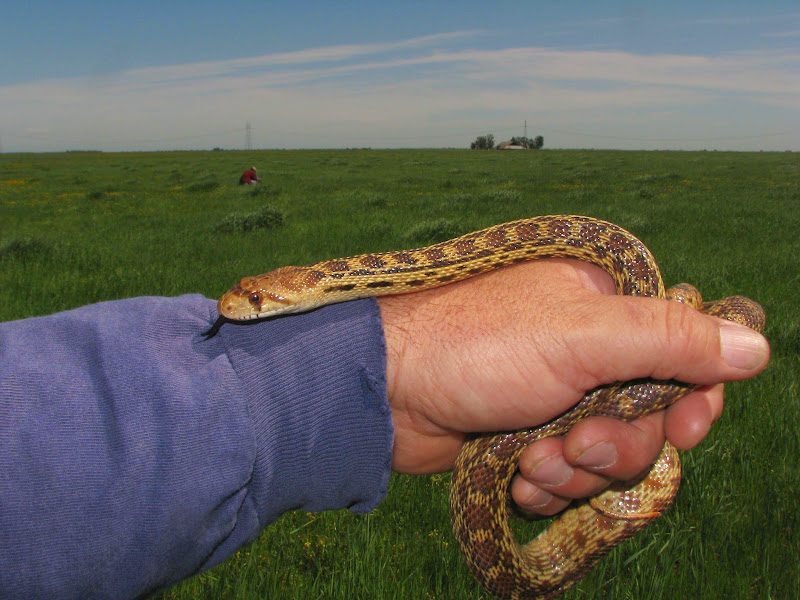 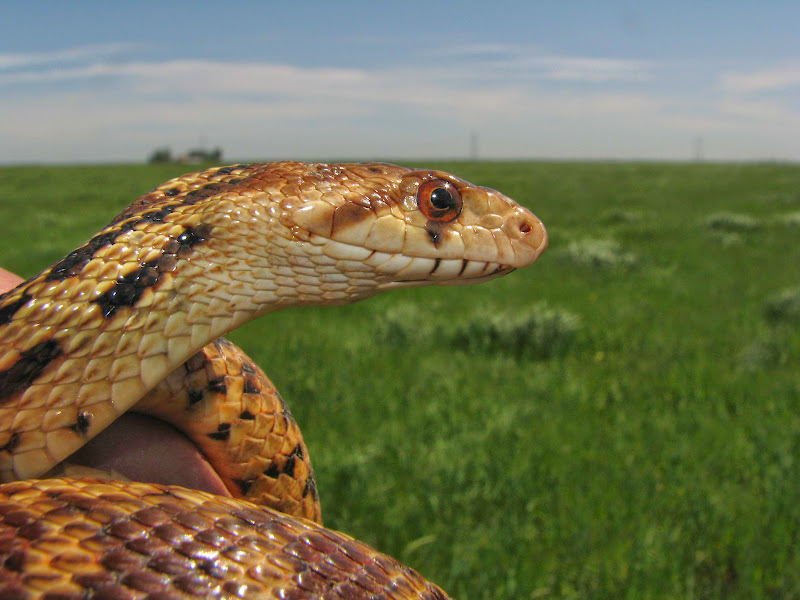 Racers in some areas were resting. Later in the day, they were definitely heated up and ready to go. One individual sprung out into the grass when the board was flipped. Never seen a racer fly before. 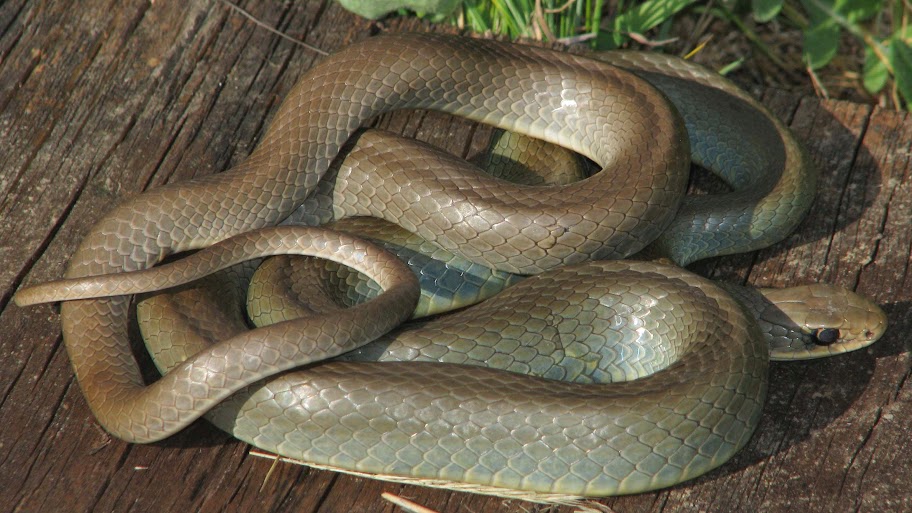 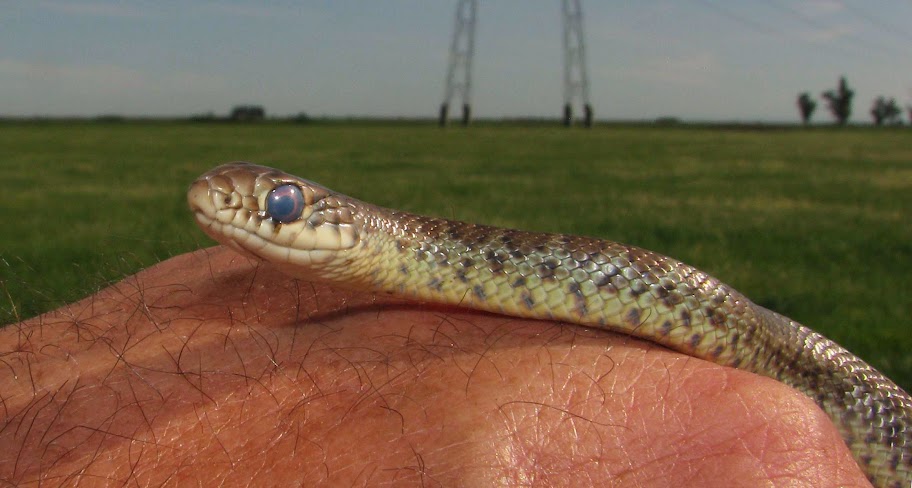 One large Alligator Lizard lost it's tail. I took these close up photos while it was writhing in my hand. 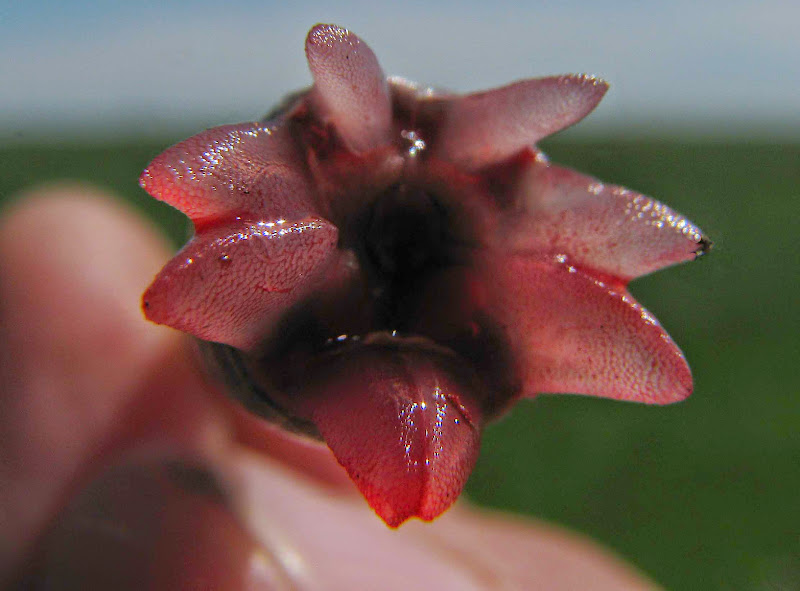 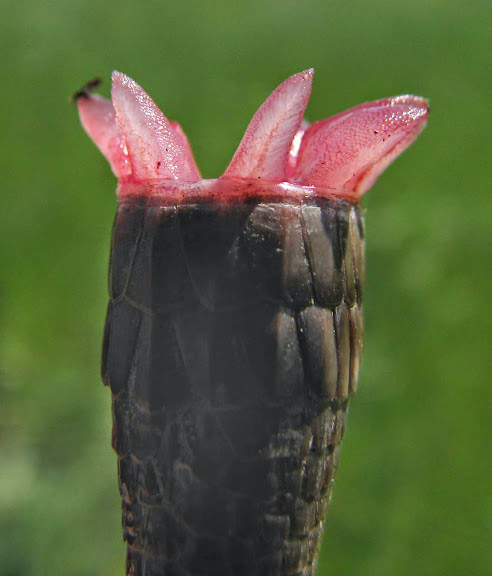 The boys at work: 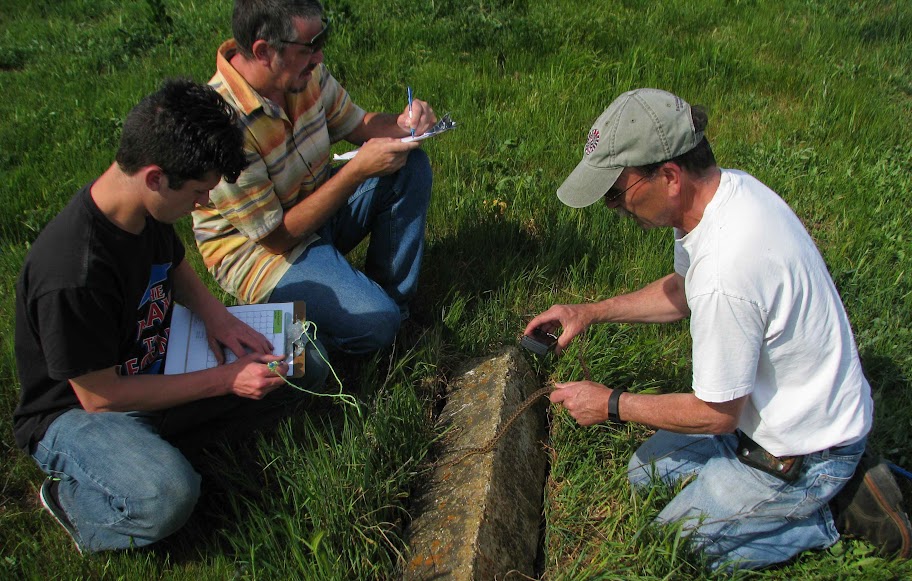 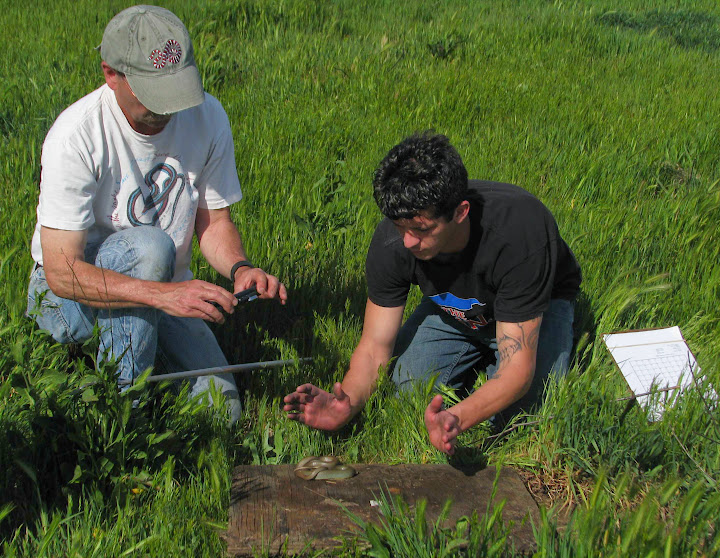 Finally, Trevor insisted we take these photos for his father. 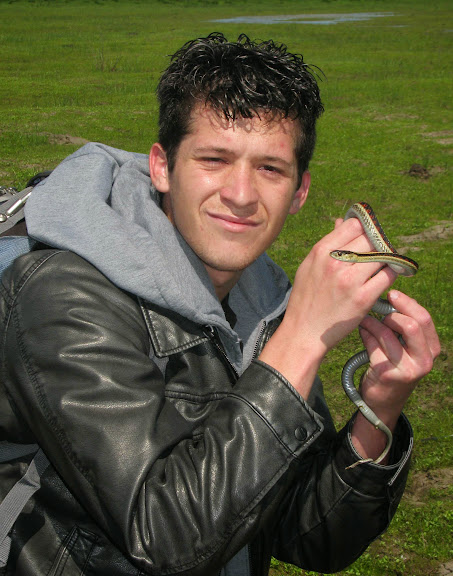 Had a great time.

Looks like an excellent day out at the survey! Sorry I could not attend this time.

The Valley Garter is a great find!
Top

There IS something else lurking in the muddy waters of the Sacramento Delta... next time, check the creeks

Glad you guys had success... I THINK Trevor knows I've only ever found one Valley... and it was Dor...

He's now seen more Mormon racers than me too...

wish we had more of that green down here...
some cool snakes in there!
Top

I have never actually taken a good look at a tail that came off. Never thought to. Amazing how much goes into that survival mechanism.
Top

Ok, it was suggested that I post this. I thought it was more appropriate to post it here instead of making a big deal about it in a separate post. Not only that, I'm very limited to internet time and don't want to get a flood of questions. This was found a while back, crossing the road from one side of the creek to the next, at one of the survey fields. Dave and the other survey people will notice which creek right off. I was hoping someone would find one this year. This is the, "something else" lurking the Sacramento delta. Valley garters are pretty common in that survey area, from what I find. I think they go unnoticed there either because there are no boards close to the creeks or because they den up in the banks. Also, the creek doesn't seem to get much attention due to the boardlines. There's so much to flip out there, that it's a scramble to get it done before the snakes warm up and hit the crawl... By the time the borads get flipped, it's garter hunting time in the creek...
So, I'm personally challenging anyone to find another Melly on the next and/or following surveys! This is an adult male, so there is good chance there are more. He's been alive and thriving long enough to breed. I think they've just gone unnoticed and may be as common as the stripe-phase and aberrant kings (which aren't very common). I also may have found a DOR in sutter county. Hard to say with the condition it was in. It had blue dorsal, blue belly, and no side yellow...from how it appeared. It was pretty thrashed.

The hunt is on

MG for Gary by California Reptile & Amphibian Appreciation, on Flickr

MV for gary by California Reptile & Amphibian Appreciation, on Flickr

That may be the sweetest gartersnake that I've ever seen pictured

Yeah, that's crazy. Never seen anything like it pictured, either, much less in person. Great find, Porter.

Amazing find, porter. Your photographs are stunning, too. You seem to have finding obscure snakes on lock down!!!!
Top

Nice addition to the Yolo post Porter. This will certainly spark more interest in the Yolo Survey and add another area to search, Dave what do you say?
That is a most incredible snake, thanks for including it.
Top

Sometimes I'm not sure if I'm finding them or they are finding me... maybe you have to be obscure, to find obscure... you know, i can't put my finger on it, it doesn't make much sense, it has me trying to figure it out, and it's not very clear to me...

I hope it will bring some more help to the survey! That would be awesome. that's such an interesting area... Even the alligator lizards seem to display that same Delta darkness in color. can't wait to see what comes out of that place next...

oh and Zach, you gotta take me to find some monkey fish sometime lol

I'm confused, was this animal found during the survey? Was it found on a subsequent visit? Either way I have a multitude of questions centering around why I'm only now seeing these photos for the first time.


We can certainly modify the Yolo survey to look for aquatic type garter snakes in the future.

For sure Dave, I'll pm ya
Top

It wasn't found during a survey. It was road cruised on my free time. If I would have found it during a survey, i wouldn't hide it from anyone..lol my joke is in reference to the definition of obscure. Just being silly ...I mean, obscure lol

1. Deficient in light; dark: the obscure depths of a cave.

a. So faintly perceptible as to lack clear delineation; indistinct: an obscure figure in the fog.

a. Far from centers of human population: an obscure village.

b. Out of sight; hidden: an obscure retreat.

4. Not readily noticed or seen; inconspicuous: an obscure flaw.

5. Of undistinguished or humble station or reputation: an obscure poet; an obscure family.

6. Not clearly understood or expressed; ambiguous or vague: Some say that Blake's style is obscure and complex. See Synonyms atambiguous.
Top

I'm not talking s*** to Zack. I'm giving him a compliment that he has also found obscure creatures.
Top

Sorry Porter, I misunderstood. This is a magnificent find. We can certainly put some time into this area on the next survey.

I understand completely. No worries. Much respect Dave!
Top

..and I hate the internet lol ...and text messaging ...and the absence on tone of voice which is the most important aspect of conveying a message.