I love big gartersnakes. This post is dedicated to big beefy ones. Please add yours as well, but NOTHING under THREE FEET LONG.

I'll start out with a Diablo Range Gartersnake (Thamnophis atratus zaxanthus). I've seen several over 32" but only one over 36". 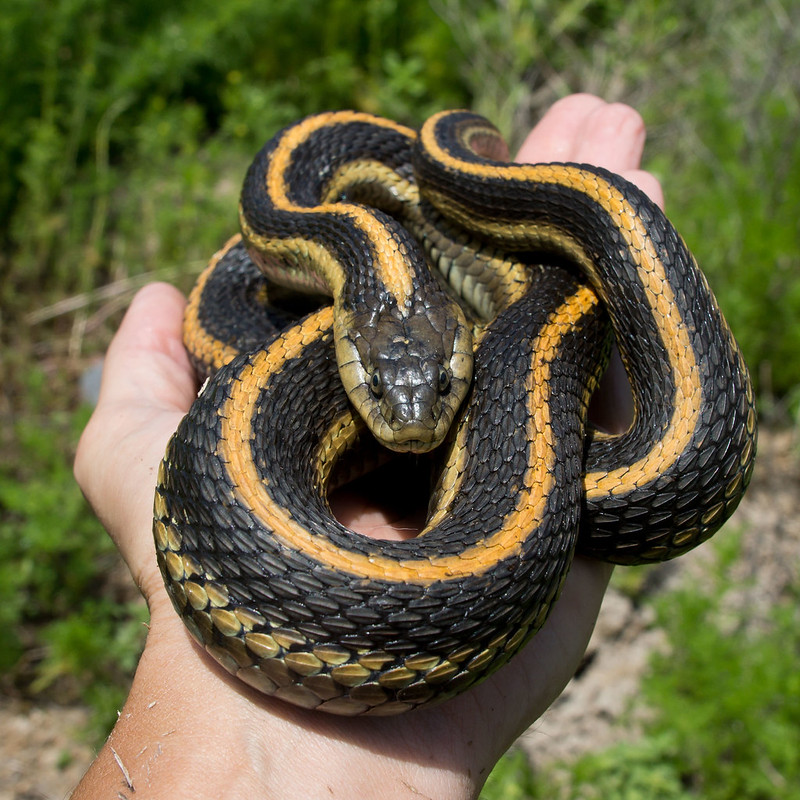 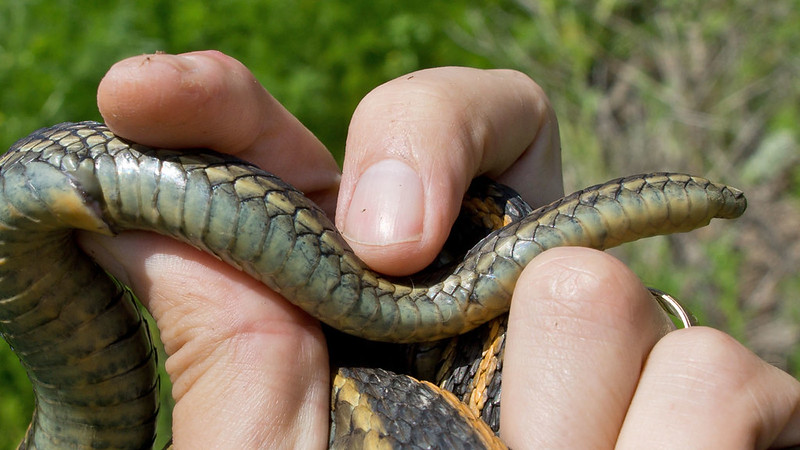 I'm really going back in time on this Santa Cruz Gartersnake (Thamnophis atratus atratus). Caught around '76 or so, it measured 36" long and was missing 3"+ of tail:

Next up is the Coast Gartersnake (Thamnophis elegans terrestris). I've seen 7 or 8 over 36", but I've never measured one bigger than 39-1/2" long. Here are five of them which ran 38" or longer. 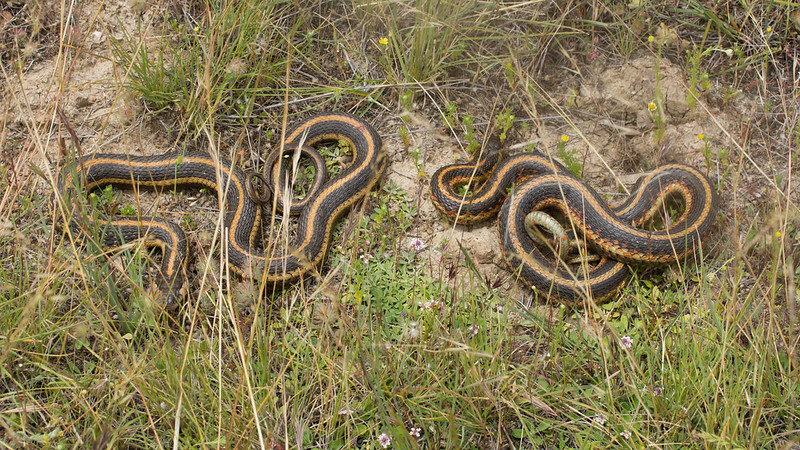 Here's another 38.5" one which is absent the orange spotting that they normally have: 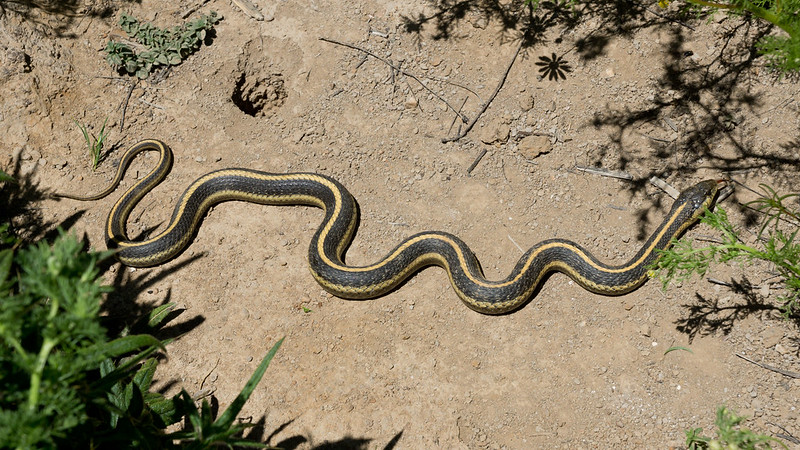 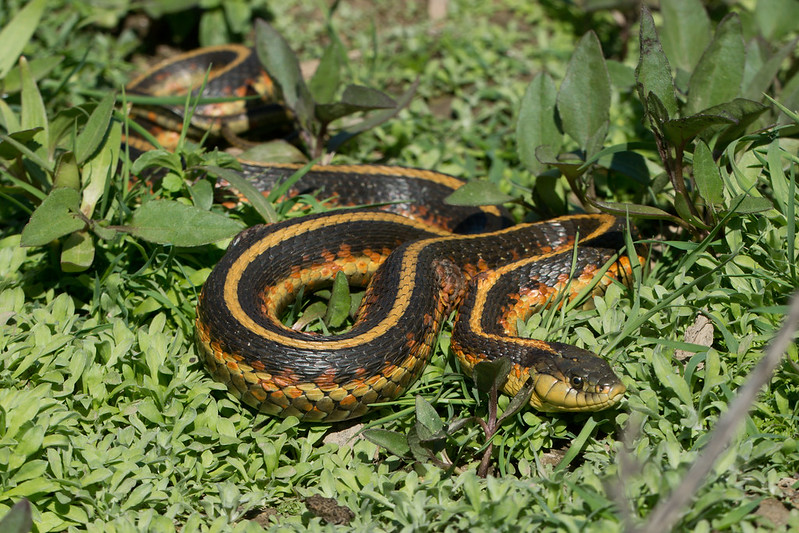 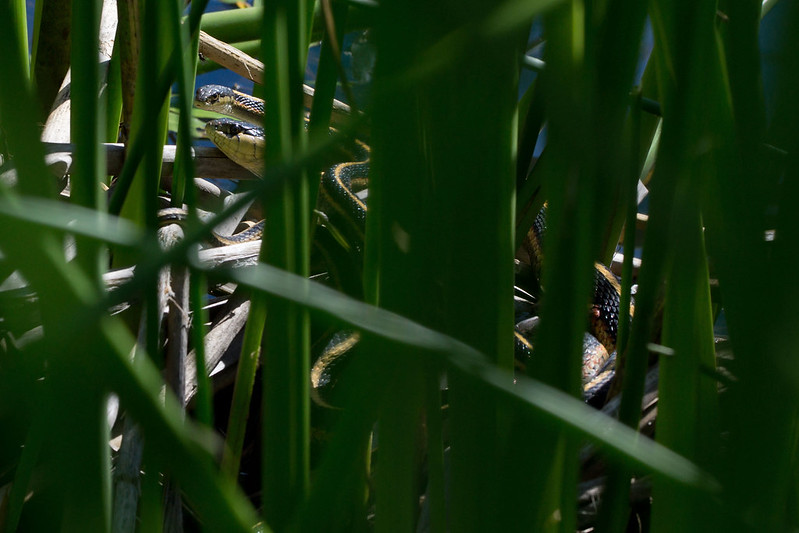 Next up is the California Red-sided Gartersnake (Thamnophis sirtalis infernalis). They can get over four feet long.

This one was found by my dog. She does "Track a Snek", which is gartersnake scent tracking. It measured 48.5" long: 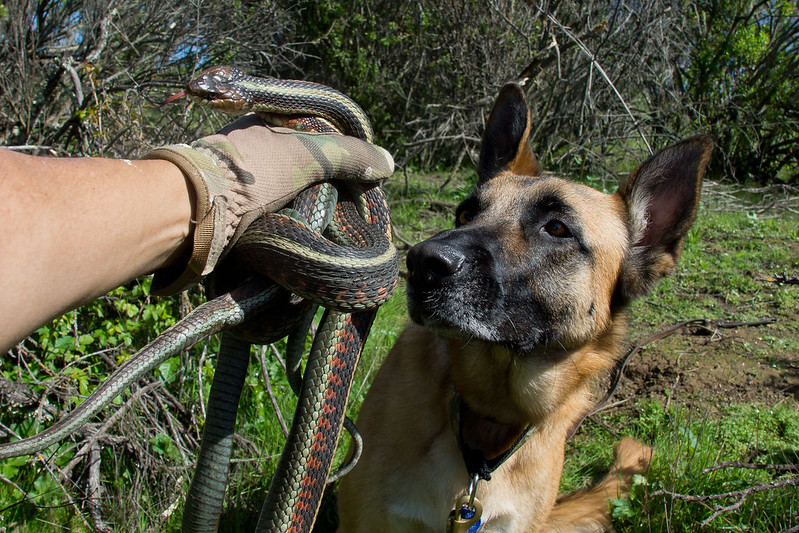 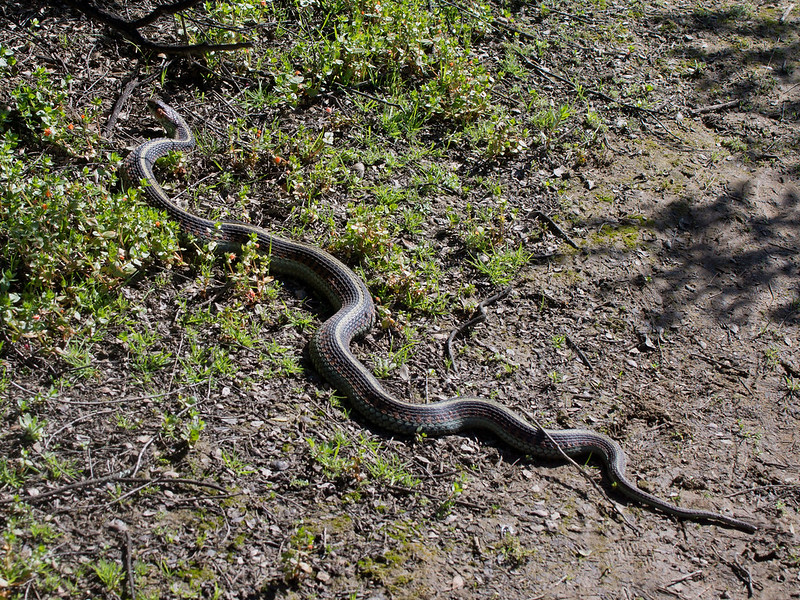 I saw it again a year later making out with a couple small males.

This 45" one was making out with a little male. I measured it about an hour after I took this picture: 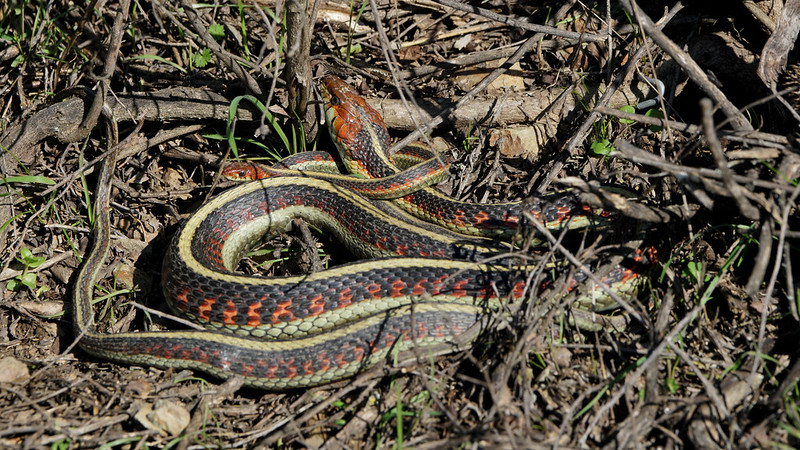 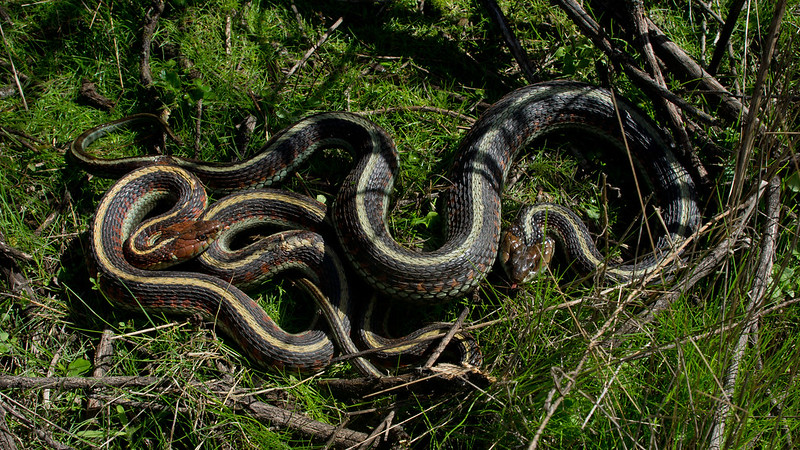 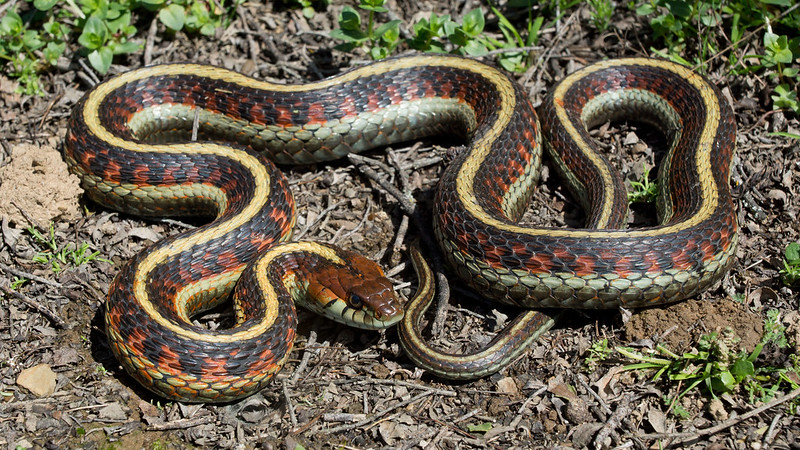 So, I would really like to see others. I know that not everyone measures stuff, but you can pretty much tell if something is over 3 foot.
Top

Those are some BIG gartersnakes

I don't usually take measurements, which I regret... but I can share a few photos of some individuals I'm sure were over 3 feet. Mostly gigas, which I can't measure anyway. But I know they are somewhere between 3 and 4 ft. Closer to 3 feet for the gigas. Largest garters I've seen have been fitchi, which one I'd guess was just as big as the ones in your photos (although I'd refer to it as a 4 foot garter lol). Probably was a few inches shy. No photos. Owen, what do you use to measure in the field? I'll add to this post later if I get my hands on one. Also, on a side note... I need a vintage mini bass for some recordings... pm me!

First... I don't have a good photo showing the length of this snake, but anytime large gartersnake are mentioned, this is first to come to mind. I flipped the snake far from any water, under plywood that had been place over a large rodent burrow. Maybe a prairie dog hole... I had found what I call "gopher-snake-sized" valley garter but this snake blew my mind. I didn't even know Mountain Gartersnakes got this big. Definitely over 3 feet, but probably only an inch or two. And it was "gopher-snake-sized" Lol I don't know if you can accurately judge by comparing the head to the vegetation, but its a big one. The snake wouldn't settle down and I think I'm holding him pressed to the ground to get the one photo. I had a in-hand shot also but back then I was more concerned with trying to get detail with the point-n-shoot than show size record and data info. So, that shot was only a head shot as well. I did see accouple of the size in courtship while herping Ione back around 2010. Only caught a glimpse. But, one time I was at work driving back from Ione and saw a fresh hit DOR that had to be over 3 1/2 feet. HUGE! It was so big the I could positively ID it while passing it. It was on the stretch of Jackson between Rancho Murieta and Sloughhouse. I wanted to go back so bad lol but I was in a work truck and too dangerous to pull over near it anyway. It was as big as any gophersnake, jet black with a bold yellow dorsal stripe. That area has some beasts dwelling out there...

Wow Owen that population of 40+inch infernalis is awesome! Way bigger than I've regularly seen closer to the coast and really cool that so many different females are getting that big. I really like the pattern on that last snake pictured too.
Here's a few of the biggest thamnophis I've seen, all captured and measured with permits.
The first BIG gigas I found. 50 inches and I believe around 500 grams, later in the season after most females had dropped so no extra embryo weight. Thanks to a perfect tail, its total length was just barely longer than any previous gigas recorded on the long term project I work on. While looking through our old records, I actually only found a handful of snakes that broke 48 inches total length, out of thousands measured. Most large females lose at least a good chunk of their tales, but also the 50-65 inch snakes of the past were mostly collected in the southern part of their range, where only a couple populations remain so true 4ft gigas are now really rare.

The difference though between long gigas and sirtalis is mass. Females gigas above 36 inches get incredibly thick, especially when gravid. Here's my longest sirtalis, measured at 53 inches, but if I remember correctly only about 400 grams. Not all that much thicker than a 32 inch gigas found just a few feet away. All 3 snakes in the photo were found in rapid succession during some ideal basking conditions. At the time, I was kind of bummed that a sirtalis was the longest thamnophis I'd seen and really wanted to top it with a gigas.

My second BIG gigas, just over 48 inches with an inch or so of tail gone. First caught when I took these photos at around 500 grams and just starting to show signs of being gravid. About two weeks later I found her again and she weighed over 600 grams.

And lastly, one of my favorite snakes of any genus I've ever seen, and now the largest thamnophis I've seen to date, shattering my previous biggest gigas by 6 inches! I spotted just a tiny section of this snake visible in some grass and couldn't believe how thick it was. As I pulled it out of the grass, it felt like it was never going to end. Total length 56 inches and weighing in at just under a kilogram. Crazy thing is that this female was just starting to show the earliest signs of being gravid. Another month or two and I'm guessing this snake would be close to 3 pounds. Because of this, she isn't quite the heaviest gigas I know of, as a gravid individual a number of years back topped a kilo, but had a very blunt tail and a shorter snout to vent length than this snake. Hope that one day a 60 inch snake shows up, but I think this one is going to stay at the top for awhile.

Also Porter, to respond to you question on airpockets, Gigas have been documented overwintering in air pockets. Seems like lots of burrows get flooded and snakes of all species come out and float to higher ground during major flood events, but a number of years back a telemtry tracked snake stayed put. It's trackers didn't know whether it was dead or alive until the following spring when it was refound healthy.
-Elliot
Top

Also Porter, to respond to you question on airpockets, Gigas have been documented overwintering in air pockets. Seems like lots of burrows get flooded and snakes of all species come out and float to higher ground during major flood events, but a number of years back a telemtry tracked snake stayed put. It's trackers didn't know whether it was dead or alive until the following spring when it was refound healthy.
-Elliot

Any chance we can get a date and name for the person who figured out the air pockets deal? And how they figured out, tested, and proved The snakes were using air pockets?

Also on a sidenote, what color was the telemetry snake that was thought to be dead when found? Did it change from normal brownish yellow coloring to all Green?
Top

I saw a Thamnophis sirtalis concinnus that was well over three foot (maybe 40-45" would be the range to put it at?) last time I was in Oregon, possibly the biggest I've ever seen out of over 1000. But it was sunning on top of a rise when I came up and went shooting off of it before I got the pic. Just barely got its head sticking out of long grass from a distance before I lost it, you can't really get a sense of the size at all. 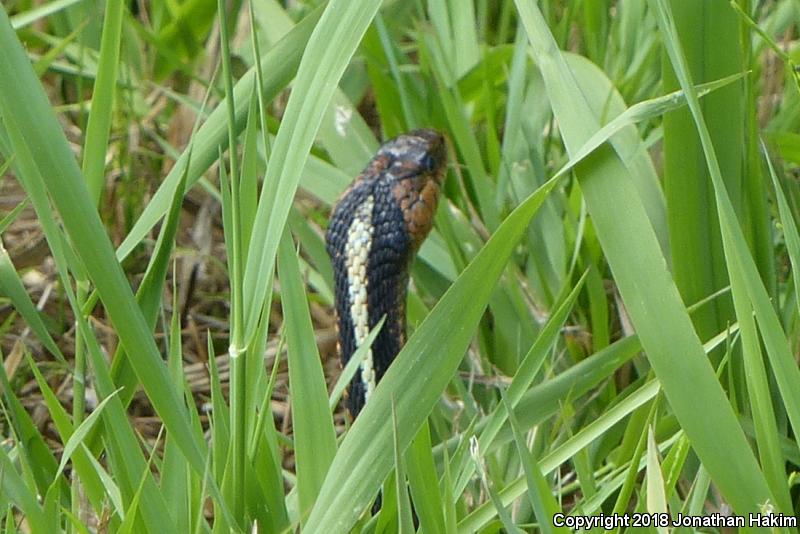 I'd say this gigas from the month before that was over 3 feet for sure too, but of course didn't measure. 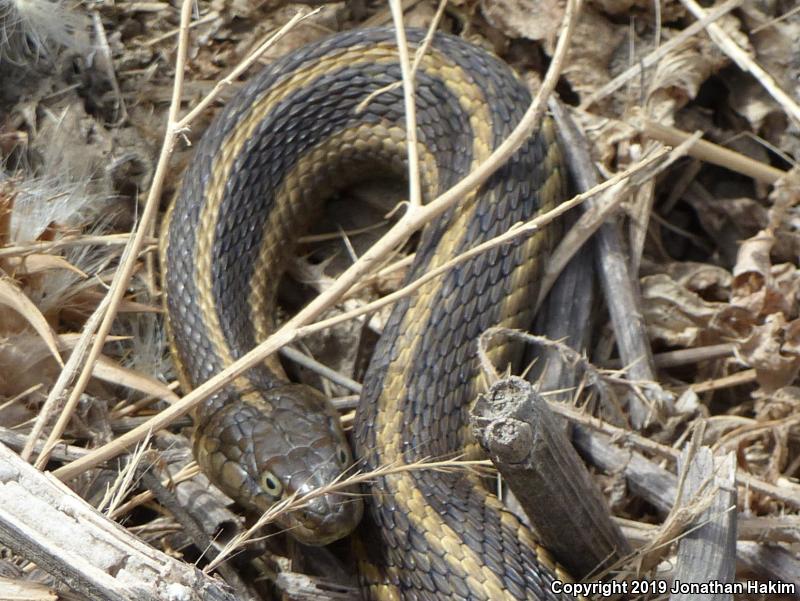 That's all I got, mostly see pretty little garters.
Top

That last Giant garter in Elliot's post is insane!
And that first Red-Sided of Owen's is nothing to poke a stick at either.

I wish I had a bunch of gnarly Garter snake pics to contribute but really these two are the only ones that come to mind...

This thick and healthy Mountain Garter from the San Bernardinos 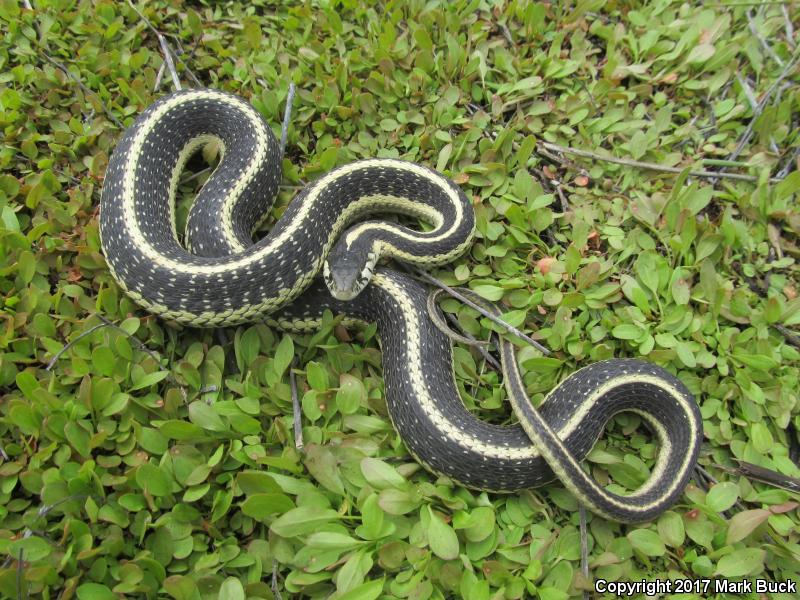 And a big ol' Sierra Garter... 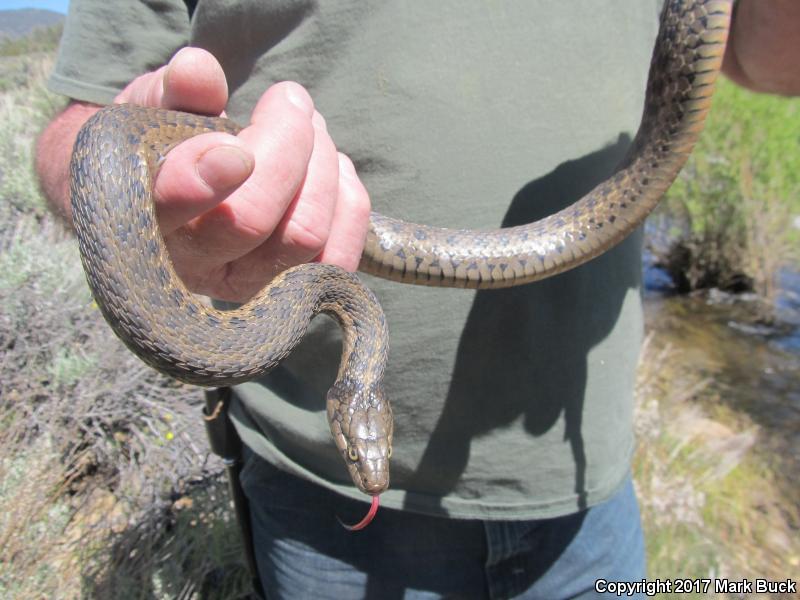