Finding a mud snake is number two on my top two list for the next several months, canebreak is number one. Could anyone help me out with techniques for finding mud snakes other than road cruising? Much appreciated!
Top

I have found mudsnakes to be reasonably common in waterlogged logs that are partially submerged in lake edges. They are pretty fast when uncovered though.
Finding mudsnakes regularly seems to be more about finding a good area rather than a good technique, in my experience.
Top

The only one I found was out on a dirt road in a fairly dry area. I had stopped to flip some trash about 9:30pm, and when I finished I looked back out on the road before getting in my car I found the mudsnake just stretched out on the road, motionless.

All I can say is good luck, but you shouldn't have a problem if you find any area they are locally abundant like Chris said. Look for DORs!
Top

Like has been said, if you aren't in the right habitat you aren't finding them regardless. But try this for some smaller ones:

kaptainkory, I enjoyed watching your video. Thanks for sharing this technique with us.

Thanks much for the advice and the video!!!!! I have a few spots in mind!
Top

That video is pretty cool. That also reinforces the idea I have always had about Farancia. When you get in good habitat, they are pretty common, just hard to find.

I've found quite a few easterns and westerns under trash that was half in/half out of the water.
Top

I have spoted a few muds over here at Lake Martin. The last one was DOR which isnt how I like finding them. As for the canebreak I have been scouting out some areas around here and hopefully can get in the field soon.
Top

Nice! I have found some spots that look good for canebrakes but not too sure, im hoping for some free time to really spend a substantial amount of time checking the area out. If you ever want company or someone to drive feel free to shoot me a message, and ill give you the heads up when i am going to have a full day if you are interested.
Top

Kory - Very cool video. Glenn was explaining your mud snake tactic to me while he was out last weekend, but the visual was appreciated. I may need to try it if I have some free time this weekend.

USCGHerpin - Not much I can add regarding mud snakes that hasn't already been said (most of mine are cruised in swampy, bottomland areas), but I wanted to chime in about the timbers. Specifically, they just seem to be absent from your neck of the woods (at least according to any range map I've seen). They occur in east TX and east of the Atchafalaya basin in LA, but not SW LA. Here's a link to wildlife and fisheries species page.

Good luck with the muds and let me know if you ever find yourself as far east as Baton Rouge.

I had lots of luck in the sloughs in Ne Arkansas using the method described in the youtube video. But also in that area after heavy rains at night you could find them easily walking or driving the slough areas, just watch out for them cottonmouths.
Top

in the ne arkansas area people could id most snakes i described to them, but the mud snake they usually could not, but once i started looking they were very common, especially in an area where Timber Rattlers were very common. good luck
Top

Whenever certain swamps dry out, flipping logs in the mud can turn one up. I found a 18" male under log in March of this year. Good luck just be consistent.

Very cool video, thanks for sharing. To the OP, I'm of no help, I can't find a mudsnake OR a timber here in Washington no matter how hard I try... Good Luck!
Top

For Canebrakes, as mentioned above, it's more about just being in the right habitat rather than focusing on specific weather conditions. I've seen a lot of Canebrakes since I moved out here, crawling out in the open from sunrise to right before sunset, with temperatures from the low 60s to about 100 degrees. Something about the habitat here is just right for them, I guess, and they're the second most common snake I see after Southern Black Racers. I've never looked for a Canebrake, they just sort of show up. Where I live it's mainly just Loblolly Pine plantations, but I've found them in natural areas too. Here's one from last week: 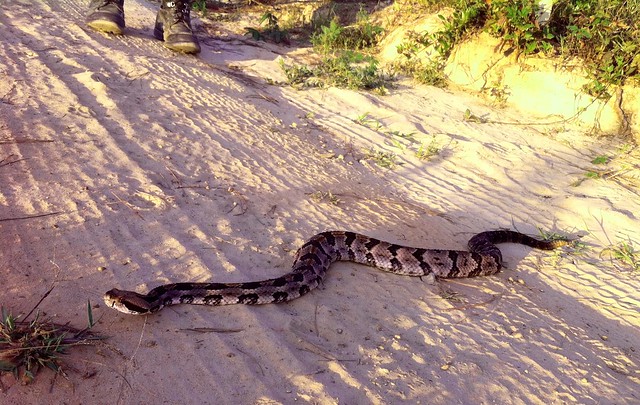