This weekend I headed out from southern California on a very brief trip to southeast Arizona with my friend James. On our last trip out here several weeks ago, we discussed possibly scheduling a last-minute repeat trip if rain forecasts aligned with a weekend to try and find, among other things, the coveted Sonoran green toad. With the forecast predicting monsoon conditions returning with a vengeance starting Saturday, it looked like a good opportunity despite all the driving it would require.

After the long drive on the 8 from southern California, we arrived in Altar Valley in Pima county as the sun was setting. Herps weren't the only target on this trip, and since the rains hadn't arrived yet as we had hoped, the first order of business was to try and find a buff-collared nightjar in a canyon in the Baboquivari mountains where they are frequently found.

View out towards the Santa Catalinas at sunset: 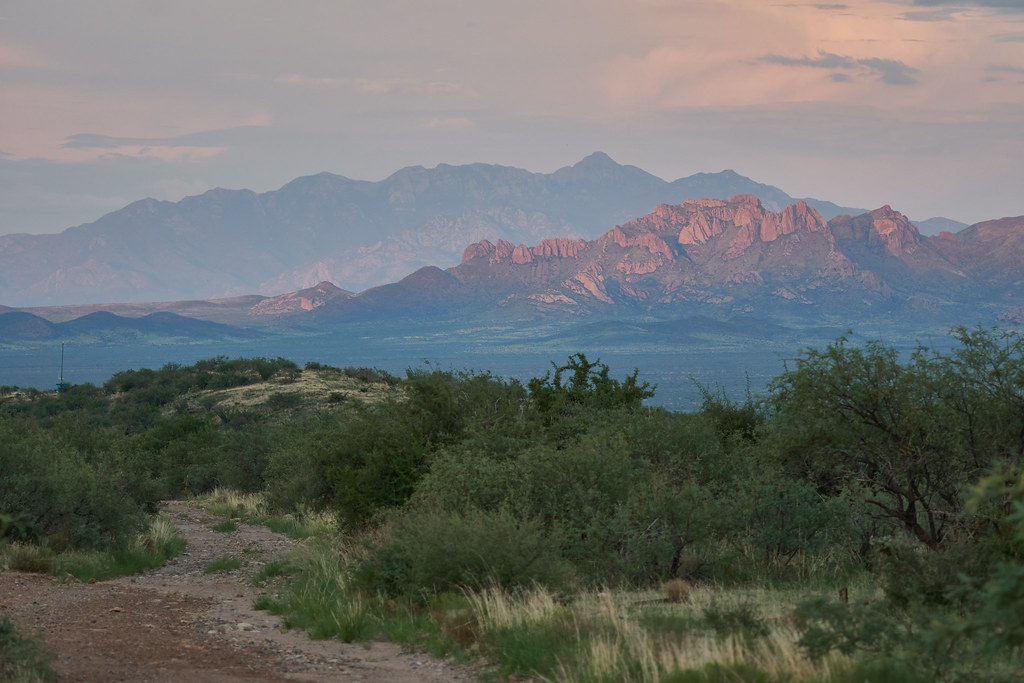 The nightjars sadly did not make an appearance, with the only notable birds being western screech owls calling in the distance. On the walk back to where I had parked the car before the road quality abruptly fell apart, I came across this decently big Sonoran desert toad (along with some juvenile red-spotted toads):

Next up was to search a known locality for Sonoran green toads. This location seemingly doesn't get people looking for them very often, and unfortunately the rain still hadn't arrived, resulting in no toads at all on a first quick pass of the target area. Some miles to the south, toads started appearing - Sonoran desert toads, Couch's spadefoots, red-spotted toads. But, no Sonoran greens, and since it still had not rained at all that day, we decided to call it early and finish the rest of the drive to Green Valley. This involved a significant distance of backroads over mountains that one would think would be good for snakes. Unfortunately, besides a large DOR western diamondback, snake activity was nonexistent on this stretch.

After arriving in Green Valley we decided to drive up to the Santa Ritas for a few hours. After running into some people with a blacklight moth sheet, we found an extremely cool snake on the road as the thunderstorms rolled in: an adult Sonoran lyresnake, a lifer for both us!

Despite being very mellow, the snake refused to sit still at all, which wasn't good news for my manual-focus-only macro setup. I managed to get some closeup headshots I'm happy with, but couldn't get any photos of the whole snake before it started to rain and we had to let it go. 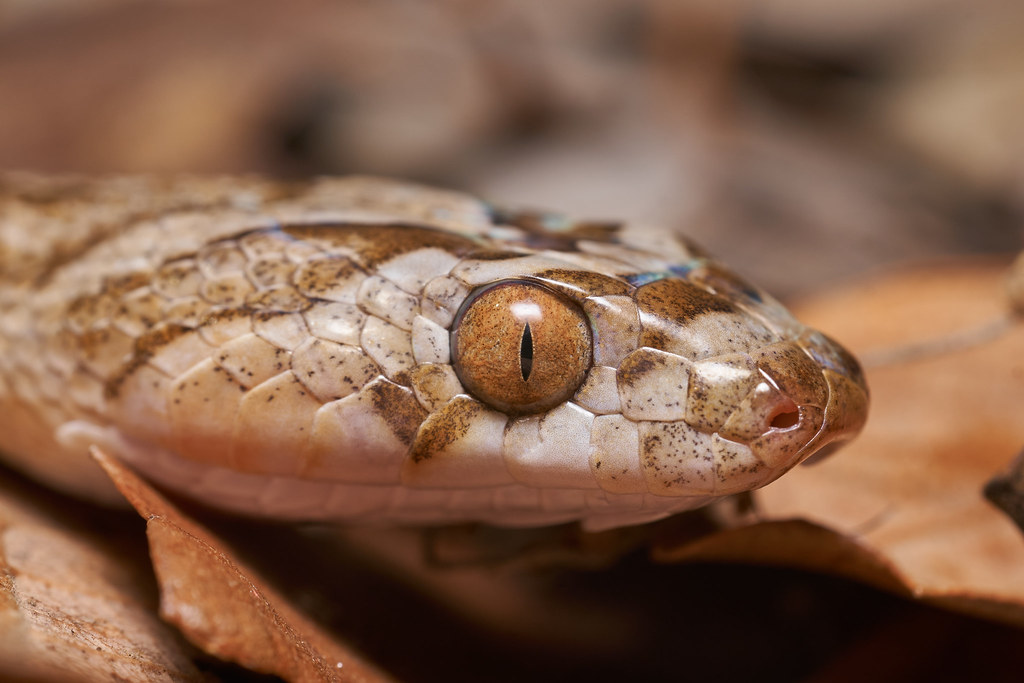 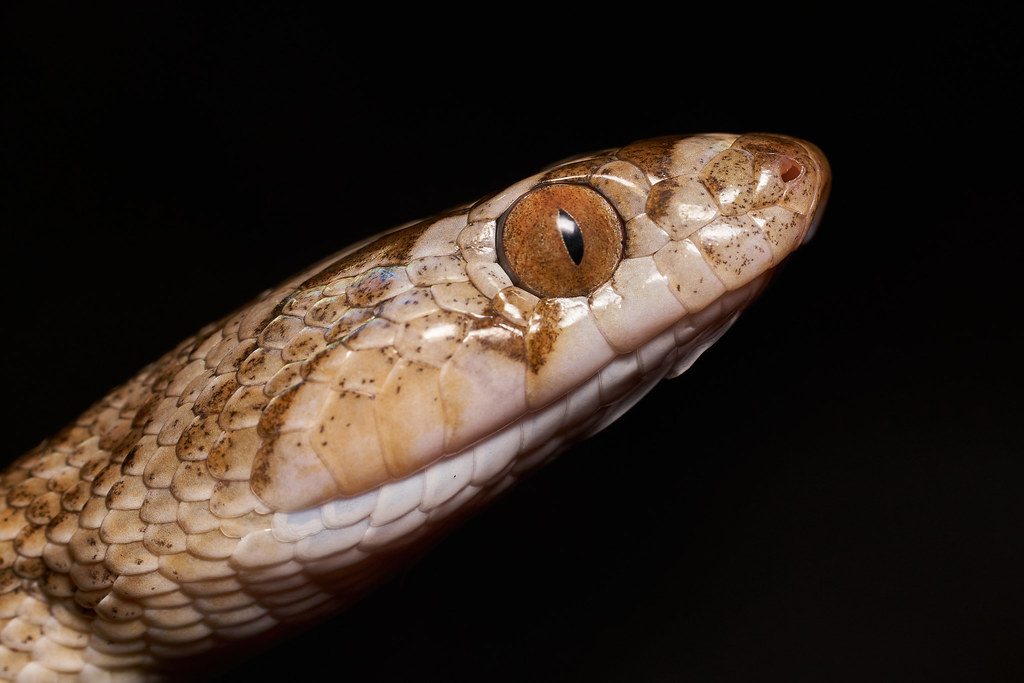 The next day was spent looking for various non-herps around Patagonia and the Pajaritos with limited success, including me taking a picture of a target bird before managing to immediately misidentify it and call out that it was nothing interesting. In the Patagonia mountains I spotted a black-tailed rattlesnake on the road, only to sadly discover that not only was it a DOR, but someone had cut off the rattle for some reason. I hope that doesn't mean they intentionally ran over the snake...

On a follow-up trek in the afternoon to re-find said bird, a juvenile Woodhouse toad was found out in the open, my first one of that species. I didn't get very good photos of it, and wasn't even sure at the time if it wasn't a red-spotted toad.

Once the rain let up, an afternoon drive to Madera canyon and back was conducted in hopes of something interesting on the road (of course, there was nothing, as is tradition). After looking at rainfall maps for the day and debating whether to re-attempt the dubious Sonoran green locality from the previous night, I was eventually persuaded to make the very long drive way out into the desert to a different locality that would, according to a paper I'd found previously, almost certainly have the toads we were looking for.

>100 miles later, the spot didn't disappoint, and we got to photograph what is in my opinion the best-looking toad in the country: 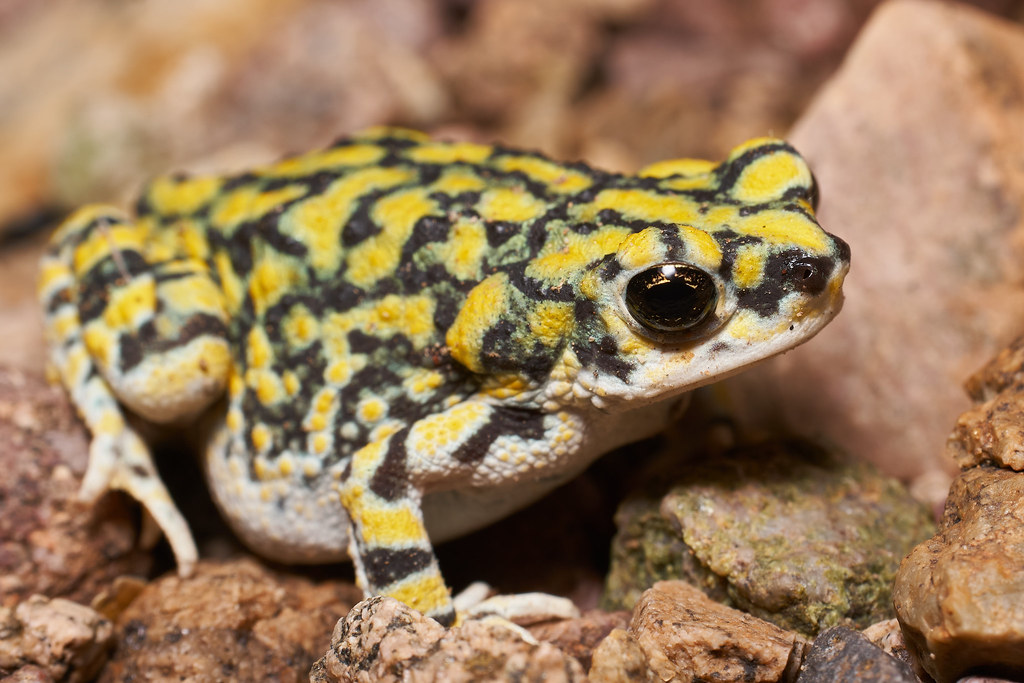 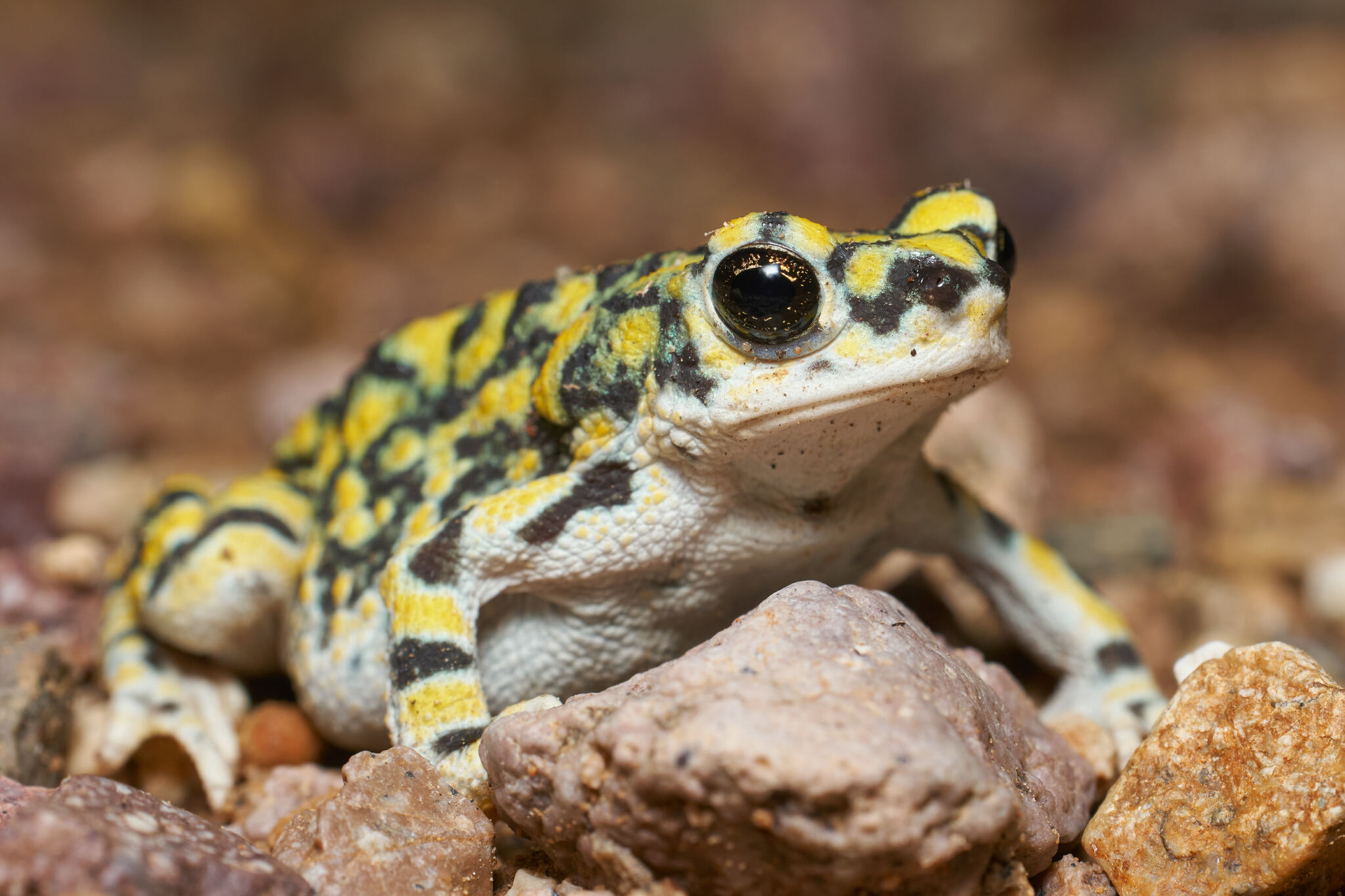 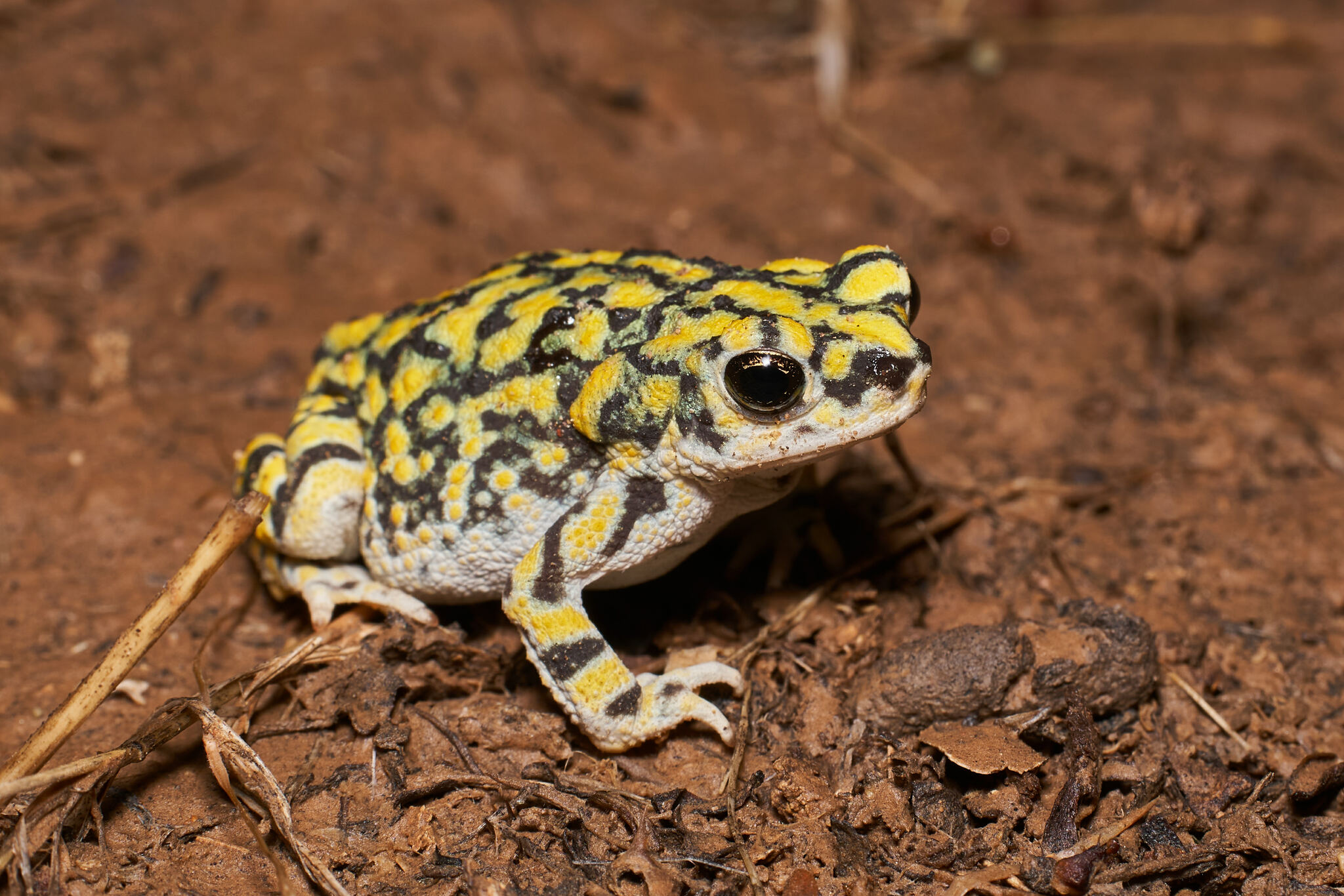 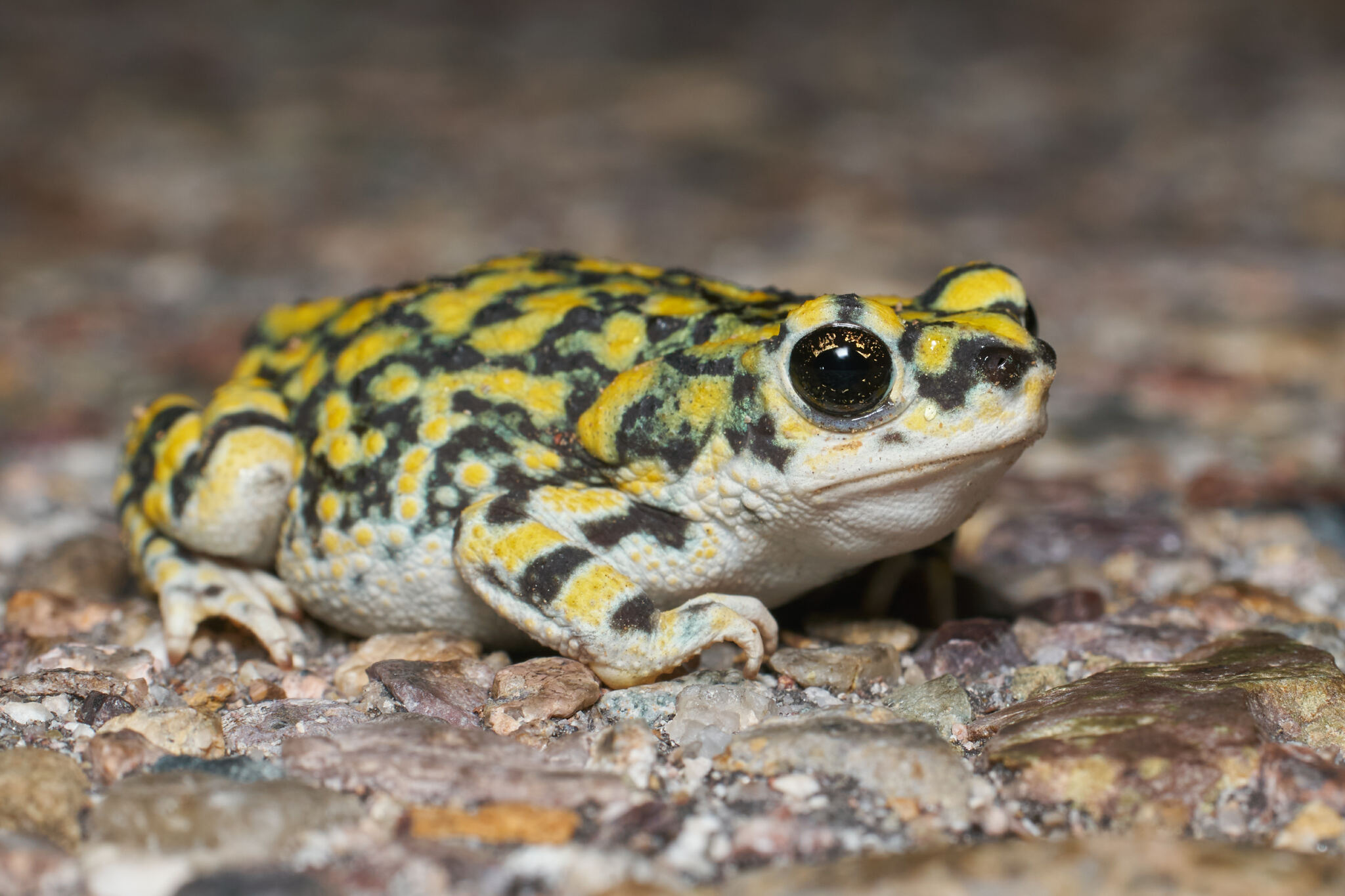 Oddly, despite all of this driving to and from this spot, there were zero snakes on the road. Plenty of toads of all kinds, though, even though we only stopped for the Sonoran green. After getting back to Green Valley after 11pm, I wanted to do another run up to Madera. Once again, absolutely nothing of note on the road, except for hundreds of Sonoran desert toads at the low elevations of the drive.

I'm honestly surprised at the lack of snakes, especially since the last trip in early July had a similar snake drought (only 2 live snakes in 4 nights of road cruising, with an average of >4 hours per night, plus a third in the daytime and an additional whipsnake that escaped off the road without photos). I thought Arizona was supposed to be good for this in the summer... but if I was only going to see one snake, a Sonoran lyresnake is a really great one, so I can't really complain.

Very nice images, I am curious how you handle the lighting.
Top

Very nice pics. That's cool that you found the toads. I was just in AZ as well. Snakes were a bit harder to come by than in the past on the roads. Around Phoenix, it was too hot for much movement. Snakes were moving at higher elevations in the region, however. In SE AZ, the amount of rain and associated rapid cooling really limited movement. Snakes were still seen on daytime hikes. In AZ, it can be hard to find the sweet spot. Too hot, too cold, too dry, too wet, etc....

Vipera - I assume you mean my flash setup? I use a Sony a6300 mirrorless camera, so I have a Godox TT350 external flash with a moderately sized rectangular flash diffuser that I attach for night cruising. Critically for mirrorless, this flash has TTL/auto-exposure support. My old cheaper external flash didn't have this or any way of communicating with the camera, which made manual focus impossible, something I rely on now.

Fieldherper - I have been told that temps in the mid-70s with rain early in the day would be good for snakes, but we had that here and very little was out. Maybe too damp? I still have a lot of intuition to gain out there. In the deserts here in southern California I always assume that anything between 90 and 65 at night is good enough, and that usually seems to hold. It seems to be a narrower window in monsoon season Arizona. But hey at least the toads aren't weird about temperatures, and the Sonoran green was absolutely the highlight of the trip!
Top

And is your flash mounted on your camera? Or do you have it set-up off camera, by ways of a wireless transmitter? Right now I have a camera mounted flash and I shoot through a DIY diffuser attached to my the end of my lens, it is sort of clumsy.
Top

Mine is on-camera. I've been told it's better to do it with a transmitter, but without a decent autofocus that would be impossible for me to do alone, and my current main night photos lens doesn't have any autofocus at all, so I'm sticking with that for the foreseeable future.
Top

The paucity of snakes may be an unfortunate trend. On my first several trips to south-central Arizona (1978-1981) my companions and I found 20 species but did not locate 13. I am considering the zone from Ajo and Organ Pipe to Nogales and Tucson.
A couple of trips in the late 1980s were very poor, and it seemed that setting out at dusk for a four-hour drive would net an early atrox and then little or nothing afterwards. Friends of mine have told me that the poor results were also the norm for the 1990s.
As one old, deceased herpetologist told me "You don't seem 'em like you used to."

Nice post, always a welcome sight to see posts with crisp images and some story telling still being posted on the forum.
What image hosting platform you used for the larger images ? I use flickr but hate the tags and stuff that comes under each photo.
Top

I was also in SE AZ during the same time. Nightime cruising was mostly unsuccessful, a couple atrox, one mojave, and one sidewinder in 4 nights. Daytime hiking at elevation yielded better results. I think the cool rain every afternoon that lingered for hours really shut down the nightime activity. Green toads were on my list but for various reasons never made it out to their range. Cool that you got to see them.
Top

Mirza Shahzad wrote: ↑July 30th, 2022, 8:06 am Nice post, always a welcome sight to see posts with crisp images and some story telling still being posted on the forum.
What image hosting platform you used for the larger images ? I use flickr but hate the tags and stuff that comes under each photo.

Thanks! I actually did use flickr for those. I just copied the image link from my photos and used it in an image embed here.
Top
Post Reply
10 posts • Page 1 of 1